Got a call from Keith Sunday night asking if I was available to guide the next morning as Ted, one of our regular guests, wanted to try out the “guided tour bit”!  Normally a very independent birder, he had often hired guides in tropical America, but he had never hired one in North America and wanted to see how it would work out!  I met him the next morning, and he had been studying the latest eBird lists and announced that a trip down Boca Chica Boulevard might best pad his trip list!  Since he was checking out of the Inn and checking into a hotel in Brownsville, we took off separately and met at the Starbucks off Morrison Road for breakfast/coffee and then dropped his car off at the hotel before heading to Boca Chica.


It wasn’t quite as productive as it was when Mike and I went (no Aplomado or Osprey before the checkpoint L), but we did stop at the intersection with Yolanda Road to check the hacking platform (no one was home) and enjoy the mob of gulls and vultures at the landfill across the way, along with a lone juvie White-tailed Hawk sitting all by his lonesome in the field!  At various stops along the road we did get him his Harris’ Hawk, Long-billed Thrasher, and at least a heard-only Verdin and White-eyed Vireo.  Making the turn onto dirt Palmito Hill Road, the plan was to get to the end of the road and do our crawling on the way out, to put the sun to our backs.  But we didn’t get far before spotting a very pale hawk on a pole that I thought was a juvie Krider’s at first, but after consulting the Sibley I concluded that it was a juvie “eastern” Red-tailed Hawk, as the belly band was very prominent (and I’m still so used to “western” Redtails from San Diego that these pale eastern birds still throw me).  He took off eventually, and while watching him soar around (and even hover), a White-tailed Hawk came into his airspace and started a dogfight!  What a show!

Checking for Aplomados at Yolanda Road 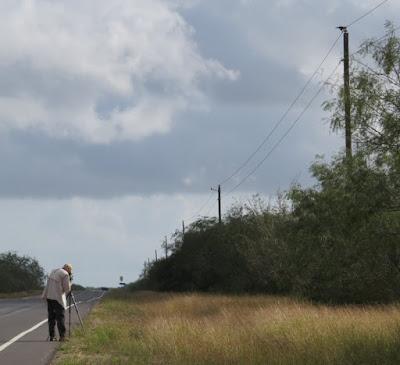 We find a Harris' Hawk instead! 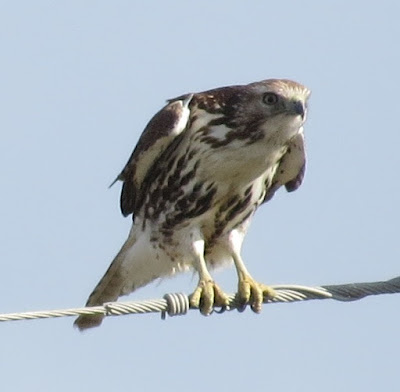 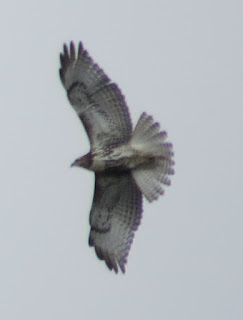 Once we made the turnaround, the habitat was great, but birds were quiet due to the wind (I caught a White-tipped Dove shooting across the road while I was turning around and Ted was still trolling, and we heard some Chachalacas sounding the alarm in the distance).  We did manage some nice looks at both woodpeckers and a Caracara back in the thornscrub, but once back out in the open area things were hunkered down except for a pair of Curve-billed Thrashers that gave great looks!  Then we made our way down to Quicksilver and checked out the Rio Grande access, which was quite birdy:  Brown Pelicans were diving and White Pelicans were sailing by on the Mexican side, but I was shocked to see another black-wingtipped white bird:  a couple of Snow Geese!  A Double-crested Cormorant caught and gagged down a big fish, and several kinds of herons staked out the opposite bank.  Dessert was served by three Long-billed Curlews that flew by!

Ted checks out the south side of Palmito Hill Road 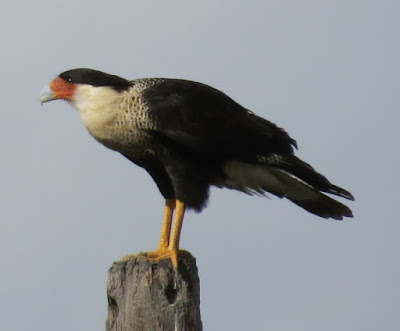 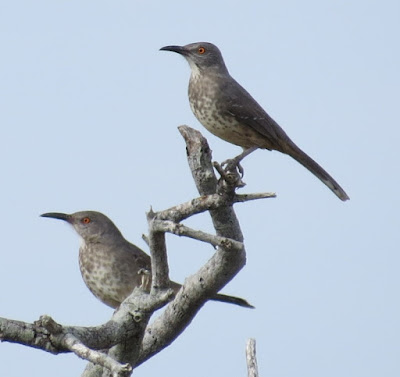 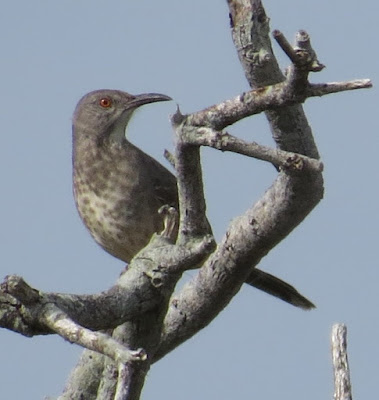 We found some distant shorebirds and both flavors of Reddish Egret on the flats, so we hiked out as far as we dared, and while there was a good mob of peeps, between the wind and the distance the only things I could positively pick out were a Western Sandpiper here, a Sanderling there, and a Greater and Lesser Yellowlegs together!  Continuing on, I almost gave Ted a heart attack by driving through the “soft stuff” at the beach access at the end of the road (it was almost like driving through a snowbank), but Heppy handled it with ease!  Heading south, the beach was in pretty good shape, and for the first time in awhile I was able to make it all the way to the mouth of the Rio Grande!  The hoped-for Bonaparte’s Gulls were nowhere to be found, however, although we were able to add the expected gulls and a few terns (Herring was new for Ted’s trip list).  Ted really got a kick out of the fact that Mexico was “right there” with several fisher-families, and even a cop keeping watch!  Shorebirds were scarce, but several Avocets were near the mouth, and a flock of a dozen Ruddy Turnstones was quite a sight!

Checking the flats for shorebirds 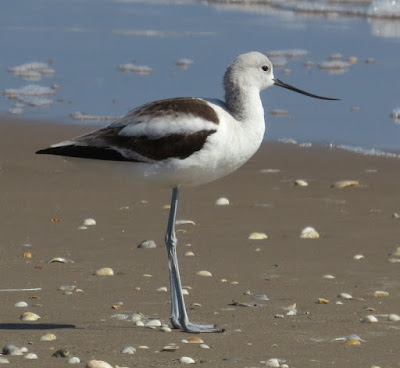 Avocet near the mouth of the Rio Grande 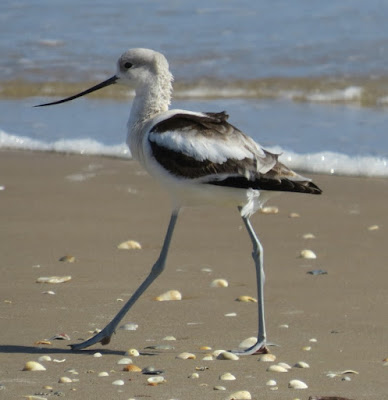 Ted checks out the larid flock on the Mexican side 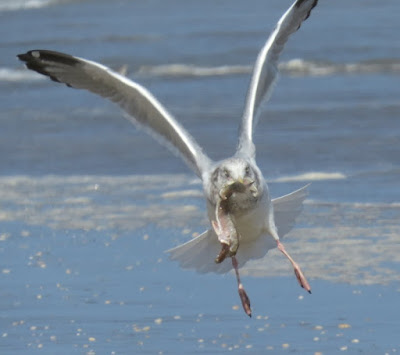 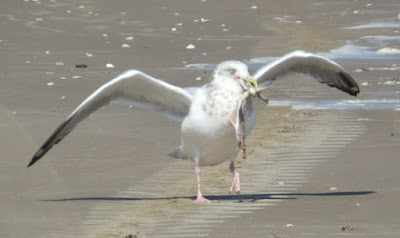 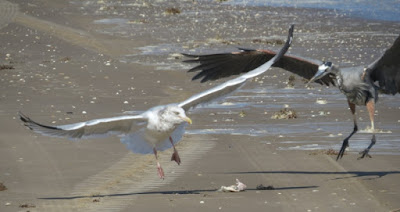 ...but a Great Blue Heron bullies him into dropping it! 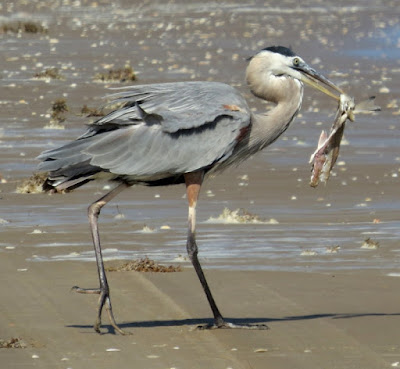 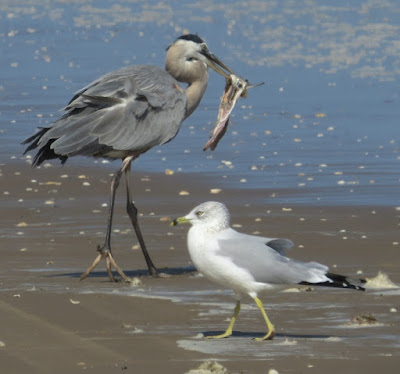 Meanwhile, a Ring-billed Gull stays out of it...

We slipped and slip back onto the main drag, picking up Horned Larks dashing across the road in front of us on the way back.  With what little time we had, we returned to the hotel to get Ted’s car, and decided to drive separately to South Padre so that he could stay there longer when I had to head back to Alamo.  No sign of the crow near the La Quinta (I didn’t even see any grackles this time), and it was pretty windy and quiet when I got to the Convention Centre; I was able to make a quick search for the Woodcock (no go) before Ted caught up with me!


I was really beginning to think it would be a bust there, but as we waited at the water feature, before long a couple of Wilson’s Warblers came in, and one of his target birds, a Hermit Thrush, eventually made a showing!  Talking about driving on the Flats piqued his curiosity, so he wanted to follow me out there, and if he felt uncomfortable taking the rental, he’d hop in Heppy.  Well, it was actually in pretty good shape, so we both went out there, logging the usual suspects lounging on the beach, with the dominant shorebirds being Short-billed Dowitchers and Dunlin.  Ted missed the Red-breasted Merganser that came blasting in and, apparently mistaking the beach for open water, literally crash-landed, but she appeared none the worse for wear as she sat dazed for a moment, and then stood up and started walking towards me!  I thought she was carrying something in her beak until I took a close look at the pictures, and discovered that the poor thing had a deformed bill! L

Ted bravely follows me out onto The Flats in his rental for point-blank looks at shorebirds! 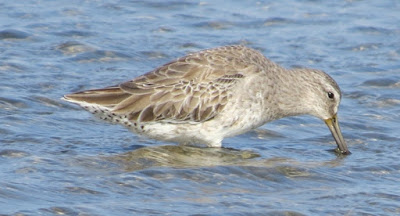 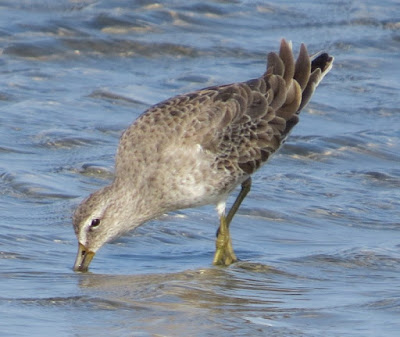 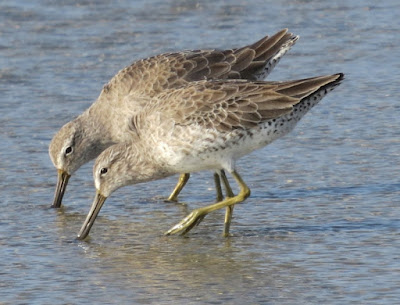 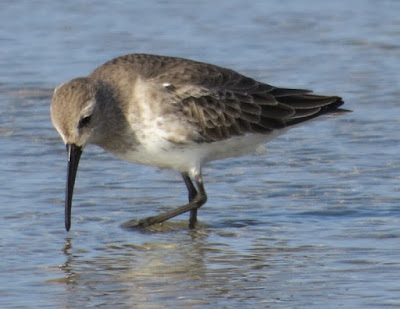 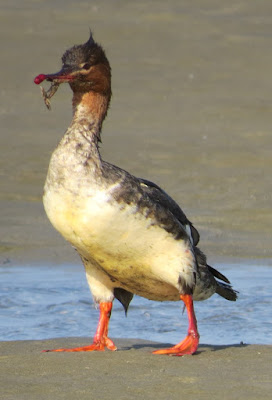 
I still had 15 minutes to kill before I had to head back, so I joined Ted back at the Centre, but not before texting him that his Mourning Doves were on the wire! J  Added nothing new except a cackling gallinule there, so I left Ted to explore the boardwalks and headed on home.  I was surprised that we didn’t clear 70 species with all the shorebirds, but the wind kept the songbirds down.  Bird list: