The cold front hit the Valley with a vengeance today, but thankfully the accompanying rain stayed in Hidalgo County and avoided Starr County, which was our destination this day!  We headed straight to Falcon State Park first, figuring that even with the cold weather early morning would be better for bird activity, but got distracted by a Curve-billed Thrasher on a residential connector street after we made the turn to the park!  (He was posing perfectly until Todd got his camera on him… L)  Along the entrance road to the park a flighty bird that landed on top of one of the gas rigs turned out to be an Eastern Bluebird, and a little further a Bewick’s Wren came in for a great view!  Todd got a shot of a mystery sparrow that I never saw, but his photo looked like it might have been a Lark Bunting, and that was the consensus of my Facebook friends as well!  Just before the entrance kiosk a covey of Bobwhite ran across the road but didn’t linger! 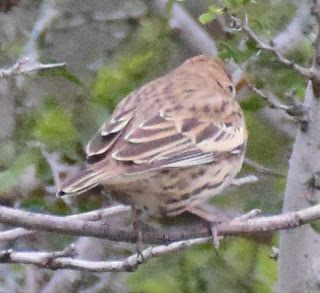 Once we checked in we crawled slowly along the roads; the normal wintering stuff was around, and Verdins chinked enticingly (although Todd said he did finally get a good look at one J).  In the primitive camping area a young Vermilion Flycatcher batted around, but that was the extent of the birdlife until we got out again to pish at some wrens, and a Roadrunner popped up behind us!  The boat launch parking lot was totally empty (the first time in my experience), but with no boats on the lake, the birds had taken over, with over 100 White Pelicans and probably twice as many cormorants floating in the cove!  They would lift off and move around, and we’d end up encountering them every time we found another cove; in the picnic area they were joined by a bunch of Laughing Gulls and a handful of Ringbills!  We had up to four Ospreys at once, and on the way out of the picnic area a pretty Kestrel and handsome Caracara posed for pictures!  We hiked a bit of the Verdin Nature Trail but got more exercise than birds (although another Roadrunner ran out in front of us before he saw us, put the brakes on, and backtracked)!  A day like today (with temps in the 50s) would have been a perfect day to hike the whole three-mile loop trail! 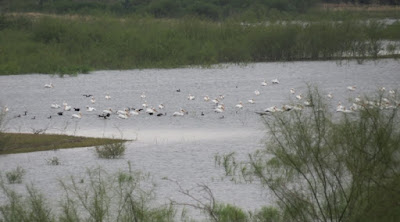 With no boaters on the lake, the pelicans and cormorants take over! 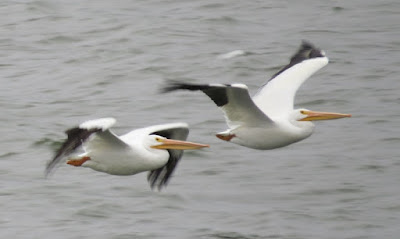 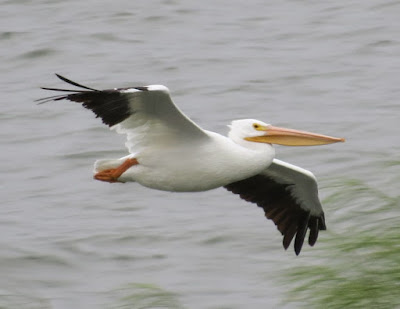 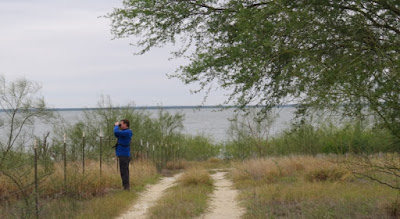 Todd checks the lake from the end of the picnic area 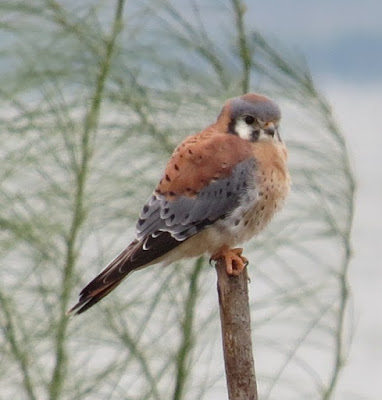 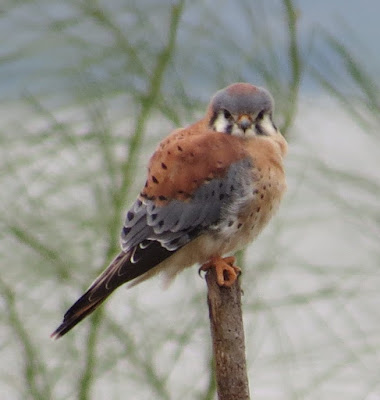 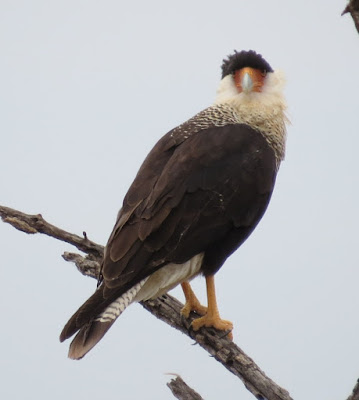 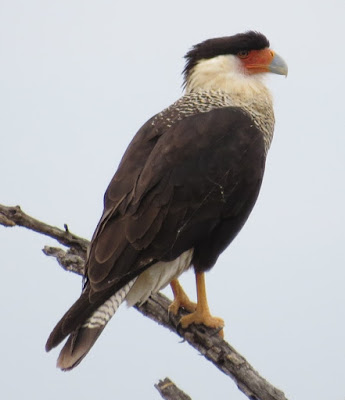 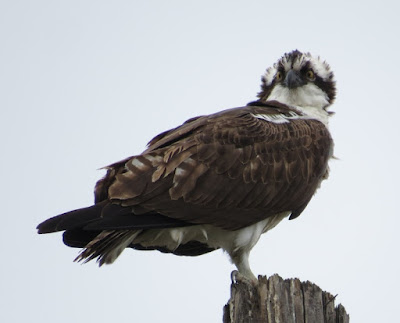 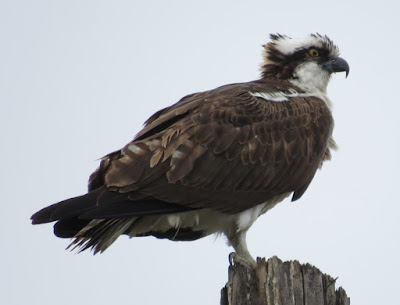 From there we went straight to Salineño, picking up a cooperative Black Phoebe on the road to the river!  We planned to give the feeders at least an hour for the orioles to show up before taking up River Watch – well!  We hadn’t even reached the porta potty before Todd spotted the Audubon’s Oriole!  (Hostess Lois confirmed from his photo that it was "Baldy", the odd-tufted bird from last year...)  There was actually a pair that was feeding on some PB mixture on the other side of the tree, so we continued on to the seating area where Merle and Lois’ “assistant” Mike was holding down the fort!  M&L (and their rescue dog Chamois - pronounced "Shammy") shortly came out when they heard us talking, so we settled in for a great time of catch-up, dog-loving, and feeder-watching!  We joked that we didn’t even have to wait the full hour for the Audubon’s to show up, but in the course of the time we did spend there Todd quickly added Olive Sparrow to his photo list, in addition to more great looks and photos of both woodpeckers, Kiskadees, Green Jays, Cardinals, a Long-billed Thrasher, an Orange-crowned Warbler, White-tipped Doves, and finally the Altamira Oriole!  Sadly the Hooded Oriole hadn’t returned; they were afraid that maybe something happened to the pair that nested in Falcon Heights and provided babies for so many years… 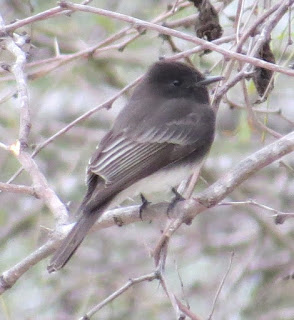 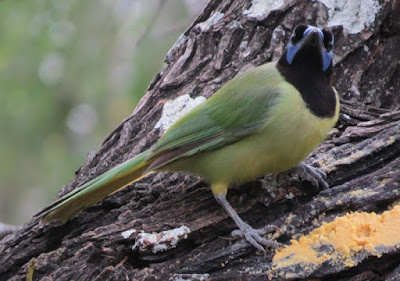 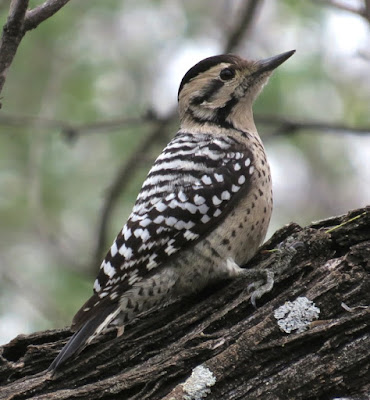 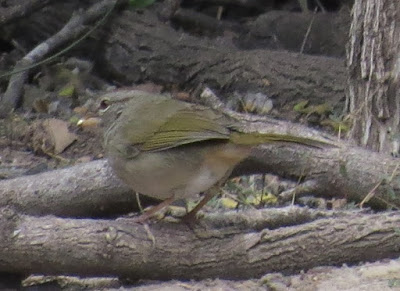 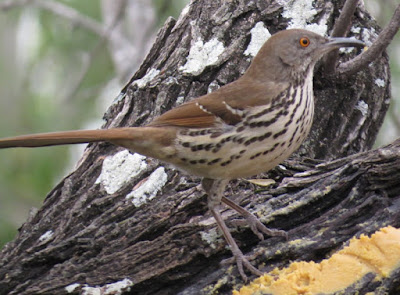 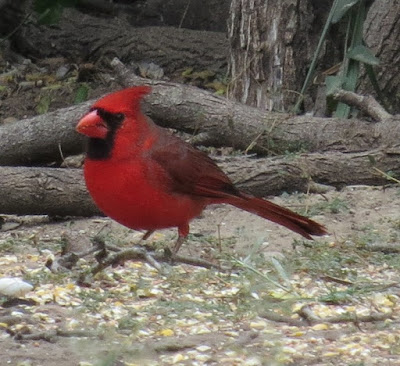 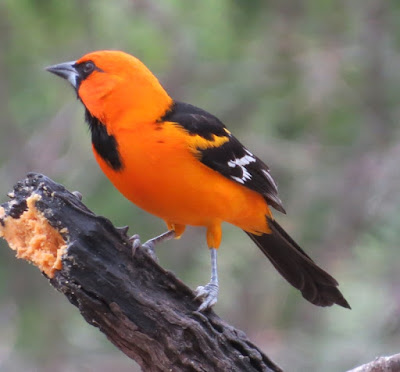 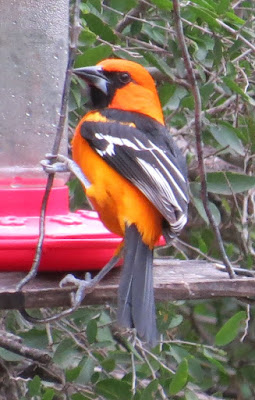 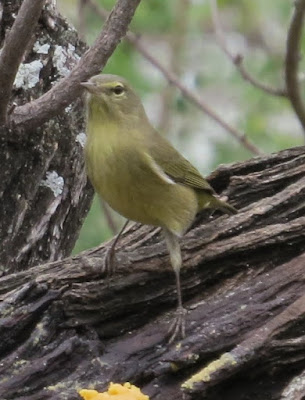 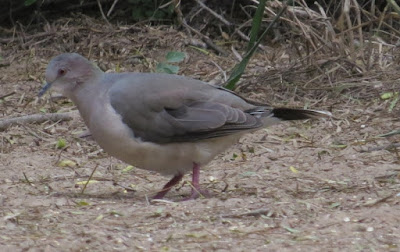 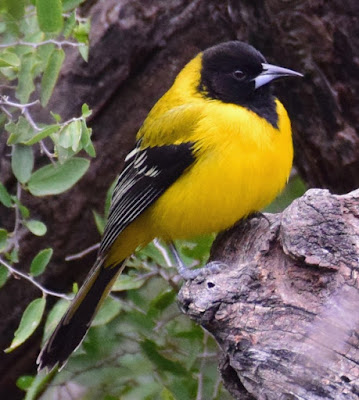 When we finally tore ourselves away from there, the show wasn’t over yet, as a “Turkey Vulture” flying overhead morphed into a Zone-tailed Hawk!  We went ahead and hiked the Seedeater Trail next, but had no seedeaters (or much of anything else, for that matter); the most interesting birds were a flock of “Mexican” Ducks on the river, one with a rather curly tail!  More cormorants lined the logs (mostly Doublecrests with one Neotropic), and a couple of Ospreys hung out here as well.  I heard a Gray Hawk “whine” but wasn’t sure it wasn’t a Green Jay imitation, so we headed up the hill and back down the driveway, and sure enough, the Gray Hawk took off, calling for good measure!  Alas, no Ringed Kingfishers graced us, but the Audubon’s Orioles were calling like crazy down the trail! 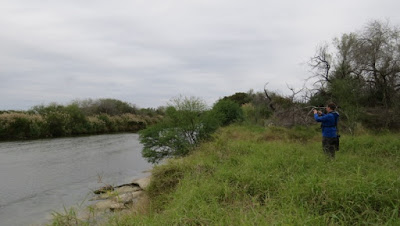 With what little time we had we opted to crawl down the Dump Road, and turning the corner onto the main road hit pay dirt with a beautiful little Black-throated Sparrow right out the window!  He was the climax, however, as the road was as dead as a doornail after that, so we headed on home.  That wasn’t the end of the adventure, however, as driving back through McAllen three Green Parakeets flew across the freeway!  We ended up with a respectable 61 species for the day. 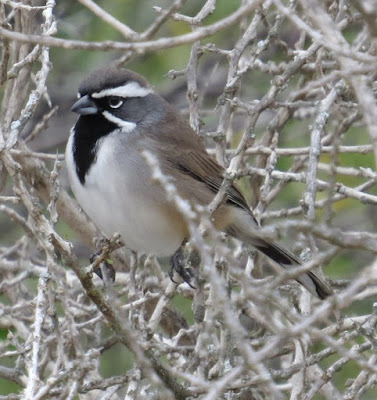