What an adventure!  We started out by heading to Sabal Palm Sanctuary in Brownsville, and after lauding to Mike what a success story the place has been, we drove up only to discover the gates were shut – I had totally forgotten they were closed on Wednesdays! L  So we headed straight to Boca Chica Boulevard from there, going the back way which pretty much parallels the Rio Grande and the Border Wall.  As we were headed north Mike noticed a “bird-nado” in the distance, and as we got closer, we saw a tremendous flock of Red-winged Blackbirds in, around, and over someone’s yard!  They literally carpeted the lawn and filled the roadside trees!  But try as we might, we couldn’t pick out a Yellow-headed… 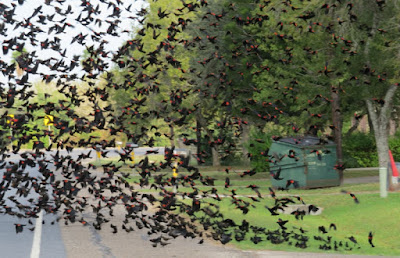 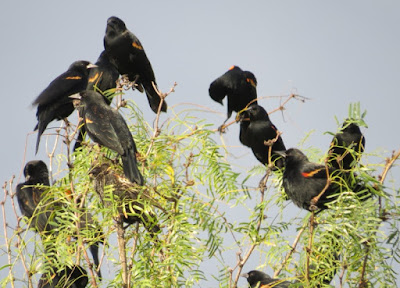 The birds settle across the street to give us good looks! 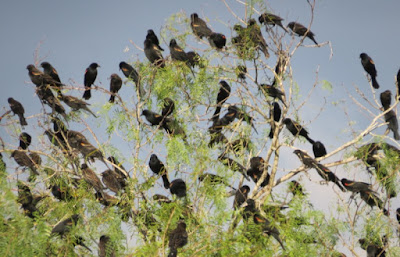 So once at SR 4 we headed east, and just as we were getting ready to pass the checkpoint Mike announced that he had a possible falcon on a post!  So by the time I could stop I was already past the checkpoint, so we turned around and went through, explaining to the (probably) puzzled Border Patrol guys that we thought we saw an Aplomado Falcon and wanted to check it out (and that we’d be coming back)!  The guys smiled and shrugged and waved us through, and as we crawled up to the post, we discovered that the Post Bird was actually an Osprey!  He was very cooperative for pictures, but as Mike snapped away I had a suspiciously-shaped bird about two poles down the road on a wire, so after the Osprey took off, we crawled some more to discover a very cooperative Aplomado Falcon who let us come right up to him!  What a beauty! 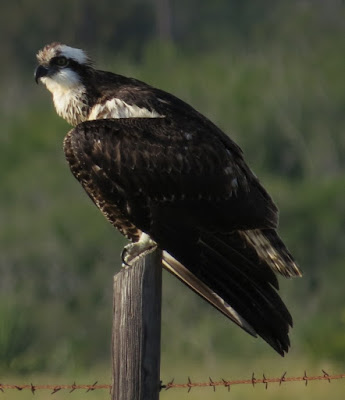 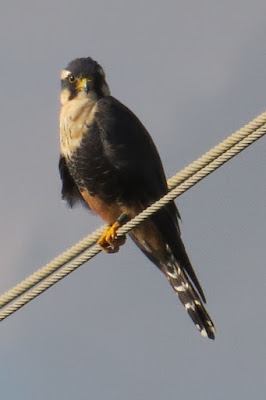 An Aplomado Falcon checks us out as we crawl closer for pictures! 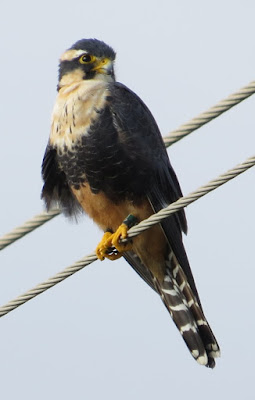 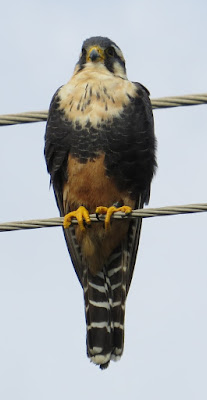 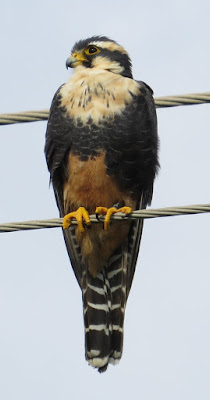 So we swung around and continued down the road, stopping at one point where I heard a Verdin, and who did come out, but in terrible light!  A Harris’ Hawk was more cooperative, and we could see that he had been banded, probably by Bill Clark, our own “raptor man”!  We shortly came to the dirt access road to the refuge where we crawled along, first stopping at the overlook where we interestingly had an adult and immature Altamira Oriole!  Other things like Yellowthroats and sparrows were being stubborn, so we headed on, stopping at what looked like good Cactus Wren habitat, but while we heard a couple, they just didn’t wanna “play ball” as Mike liked to put it.  A Bewick’s Wren was a little more cooperative, and a White-eyed Vireo allowed fleeting glimpses along with an Orange-crowned Warbler, but the Ruby-crowned Kinglet was content to rattle at us.  At one point I heard some croaking overhead and four Chihuahuan Ravens drifted over, shortly catching a thermal with four Black Vultures and a White-tailed Hawk!  A pair of Yellowthroats hopped up on the wire, but birds on wires and autofocus cameras sometimes don’t mix… L 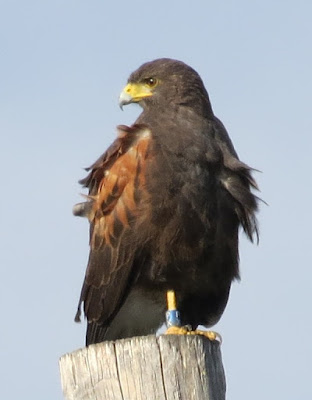 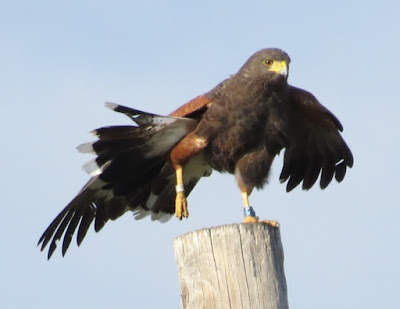 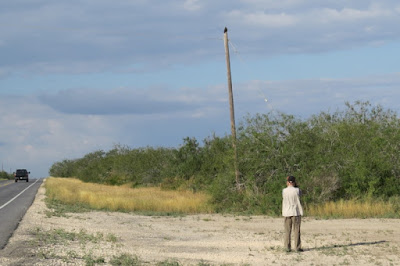 Mike gets his own photo! 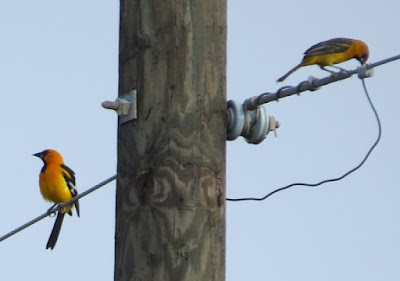 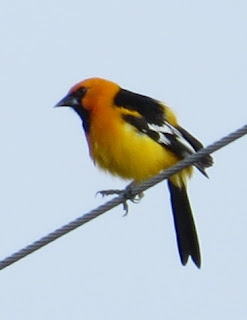 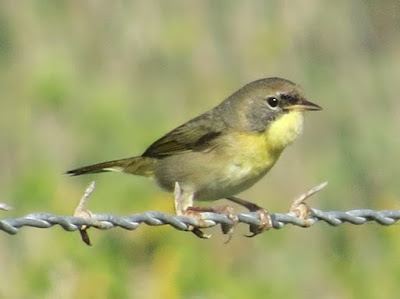 Turning the corner we had more stubborn Verdins, but the prize was a Beardless Tyrannulet that wheeK!ed at us and did allow brief views, but in the sun and not where Mike could get a photo.  While we were trying to lure him out an apparently large covey of Bobwhite were making all sorts of interesting noises on the other side of the bushes!  We took it slow on the way out and still didn’t manage the Cactus Wren, although something flew across the road and promptly disappeared that looked suspicious…


From there Mike was more interested in “scrubby birding” than shorebirds, so he indulged me long enough to stop at the “Happy Face” and look for Xami Hairstreak, a rare and local butterfly that I knew was somewhere along Boca Chica Boulevard but had never found, until Kristy, another one of our guests, had found them a couple of days previously and told me exactly where to look!  When we parked another carful of butterfliers happened to be getting ready to leave, and they confirmed the road to walk down, so while Mike trolled for more Bewick’s Wrens and Verdins, I headed down the road and found one of the little buggers right away!  For some reason the macro on my camera didn’t want to work, so not wanting to leave Mike too long I headed back a little disappointed, but about that point I noticed a Bewick’s Wren right on top of a palmetto!  I managed to get Mike and we headed back down the road, and finally the bird cooperated and Mike was able to get a cracking photograph of the wren!  By now he was curious about the butterfly (and I wanted to try for a better picture J) so we scoured the succulent plants that were their host plants and did manage to scare another one up, and this time was able to get a decent photo!  Mike commented that it looked very similar to their Green Hairstreak in Britain. 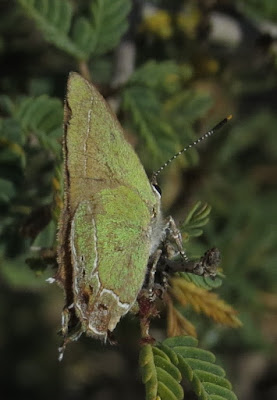 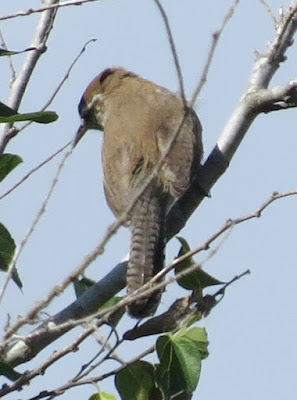 Meanwhile, a Bewick's Wren sits up for a look! 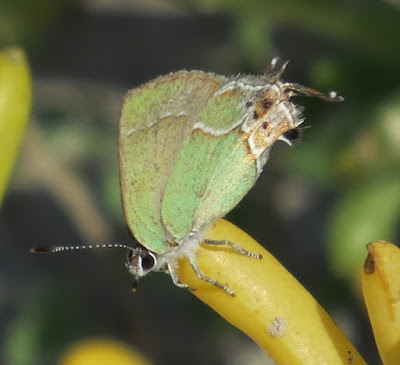 The Xami Hairstreak poses as well!

From there we turned around and headed back to SR 511, stopping to photograph a family group of Harris’ Hawks on the way.  This time when we went through the checkpoint we had a different agent who was actually making a point of studying the local birds (he even had one of those laminated ID cards that we sell at the Inn)!  I showed him a picture of the Aplomado Falcon since he wasn’t aware of that one, and told him that birders from all over the world come down this road to see that bird!  I think he was duly impressed!


From there we headed up to Old Port Isabel Road, which was fairly quiet except for a flock of about 40 Long-billed Curlews that flew across the road ahead of us; thankfully a few individual flew overhead after we stopped!  Again, we stopped several times to troll for Cactus Wrens, but never heard a one; pipeline traffic was pretty heavy, and at one point a fellow from Beaumont who was down here working on the project stopped to chat; he was quite a character!  By the time we made it up to the work area, it initially looked as though the road was blocked with vehicles, but they made room (one well-dressed guy warned us about the shape of the road up ahead, but I assuaged his concerns J).


Once past the work area the road wasn’t as bad as it has been in the past; the “wetland” spot where they actually rebuilt the road was a little dicey, but it was at that spot that we heard a couple of Sedge Wrens!  Neither wanted to come out, of course, and truth be told that was probably the most exciting thing on the whole route!  Some Mottled Ducks were in the canal, but other bird life was pretty sparse except for a pair of Caracaras (or Mexican Eagles as the guy from Beaumont called them…). 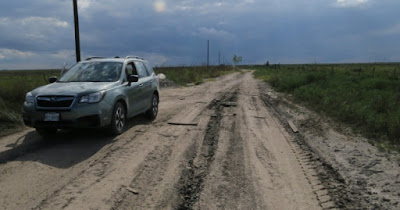 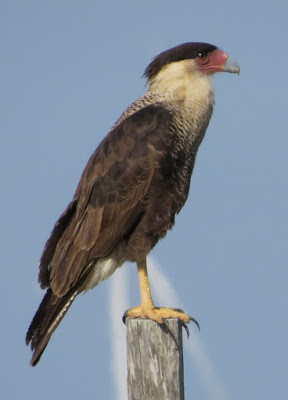 So from there we headed to South Padre with what little time we had, as I had actually talked Mike into trying for the Tamaulipas Crow that was hanging out there!  The last report had him hanging around a dumpster near the La Quinta, so when I saw a large caliche parking area, that’s where we pulled in and just crawled around the circle, and just as we were approaching the exit, there was the crow, flying in front of us!  He landed on a lamppost in the construction area across the street, but the minute I took my eyes off him to watch the traffic, he was gone! L  So we decided to head on to the Convention Centre as Mike wanted to try for more songbirds.


After parking, I left Mike to poke around on his own while I visited the restroom, and upon exiting I made the rounds around the “circular area” looking for him, and found the Centre’s “pet” White Ibis pair probing the grass instead, with one of them trying to gag down a baby turtle!  When I finally found Mike he was in the area where all the action had been the last time we were there, but aside from a Phoebe, it was pretty dead (plus the guy with the blower was making the rounds), so after a quick look at the South Pond to pad the list, we started home with the plan to try for the crow one last time for a photograph. 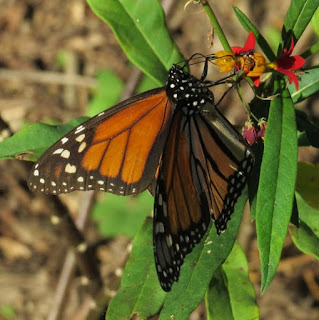 Monarchs are still migrating through!

Well!  While passing the La Quinta there was a little band of birders with cameras pointed skyward led by Gavi Gonzales (the naturalist at the Birding Center), and there was the crow on a post!  We wheeled into the caliche parking area again, and while the crow initially flew to a palm, he eventually flew back across the street and allowed everyone to get cracking photos while he perched on a variety of places!  That was a very fitting end to the day as, during his whole trip Mike had been very reticent to chase a crow despite my periodic nagging that he “needed this bird”, and after finally caving in he admitted that, for a crow, it was very “smart” looking, and he seemed just as excited as the other birders to secure a good photo!  I teased him by saying this was a classic “Green Eggs and Ham” moment (and if you don’t get the joke, you’ve missed a classic Dr. Seuss book J)! 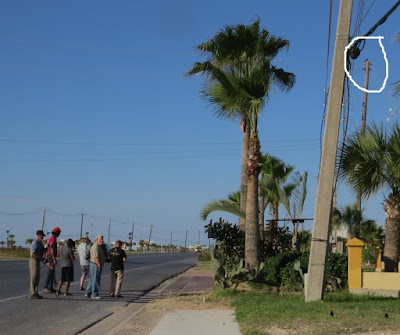 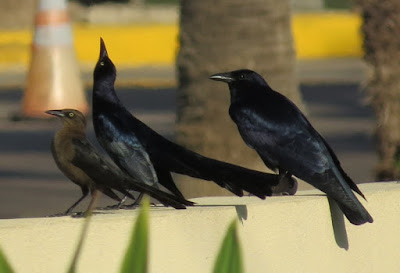 Here he is on the right with a pair of Great-tailed Grackles on the left for comparison. 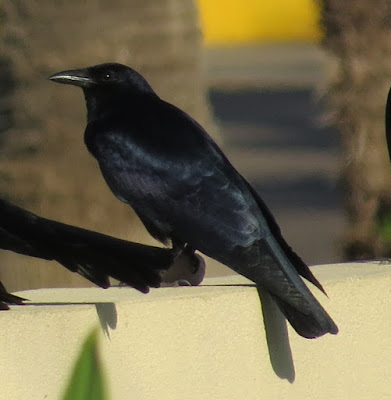 He's quite small for a crow, and has a strange, frog-like croak.  They seem to be making a comeback to the Valley after a ten-year hiatus! 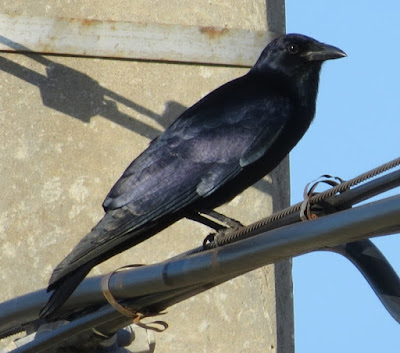 Headed home with 63 species for the day (those in italics were heard-only, and the parakeets were added after I got home…)