In Search of Owls

There was news of a Ferruginous Pygmy Owl at Santa Ana, so we decided to head down there this morning and do the “big hike”, since the spot where the owl was seen was a ways down Willow Lake Trail.  But as we unloaded our gear in the parking lot, the bird of the day so far as rarity goes was calling from a Sabal Palm on an “island” behind us:  a Winter Wren!  Thankfully he gave a brief but identifiable look, and I was able to record his call, so we were able to get some kind of documentation!


Headed out on the Willow Lake Trail after checking in with Ranger Raul and getting last minute directions (although we had heard rumors that so many people had gone out there Thanksgiving Day to find the bird that it probably moved on).  Things were fairly quiet, and while we did run into feeding flocks here and there, most things only gave fleeting looks (if any at all), but we managed to add titmice, kinglets, gnatcatchers, Orange-crowned Warblers, a pair of Altamira Orioles, and even a Pine Warbler and Yellow-bellied Sapsucker to the day list.  At the big culvert we got our first view of the gang of ducks – mostly Gadwall, but with a few Pintail and Coots.  We found the spot where the owl had been seen, but couldn’t find a hint of him, not surprisingly.  A Lincoln’s Sparrow popped up for us as a consolation prize, a buffy-looking Indigo Bunting posed briefly on a slender twig, and White-fronted Geese cackled unseen in the distance. 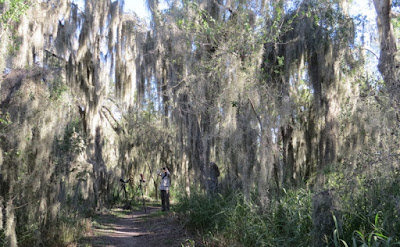 Mike along the Willow Lakes Trail 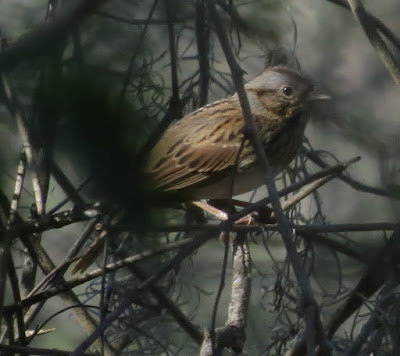 We made the whole loop (which I hadn’t done in years), and enjoyed the new overlook they had recently built, where we added a Lesser Yellowlegs, two soaring Anhingas, and an Osprey to the list!  A pair of Belted Kingfishers were rattling and chasing each other, but never settled down.  We came to the turnoff to the bird blind and decided to check it out, but not before a Beardless Tyrannulet started calling right in front of us, and neither of us could spot him! L  He eventually went off into the sunset… 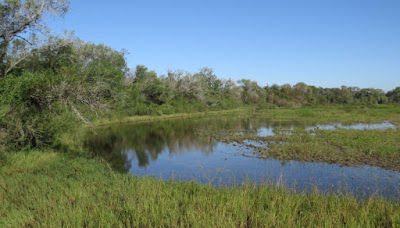 View from the Willow Lake Overlook

The bird blind didn’t even have a water feature going, so we headed to the Tree Tower in hopes of spotting a Hook-billed Kite.  Discovered that Justin (who sometimes guides for us) and Stephanie were already up there, but they’d had nothing but a Harris’ Hawk show itself.  I think we found the same bird, but after 15 minutes nothing even close to a kite showed itself, so we headed back down the staircase and continued on to Pintail Lakes.


That was much more productive!  We found several species of waterfowl, including a nice male Canvasback and a female Bufflehead!  Some stilts and a Least Sandpiper were in a little mucky pond, but over in the far ponds we hit the jackpot:  Mike’s beloved Vermilion Flycatchers were putting on a show, two little males having a dogfight right in front of us!  We finally got into a position when one of them perched in wonderful light right in front of us, and it wasn’t long after that when the male Green Kingfisher we were tracking decided to blast in and perch on the same little branch!  What a show!  The young Harris’ Hawk was almost a yawn! J  Resting on a bench we were able to enjoy the many dragonflies:  a nice Roseate Skimmer posed in front of us, and Mike spotted a pair of Wandering Gliders flying “in the wheel” (usually I only see them in tandem)! 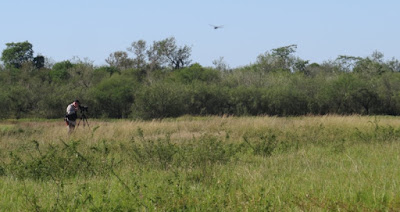 Mile scopes Pintail Lakes while a dragonfly buzzes nearby 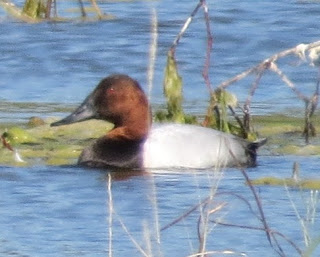 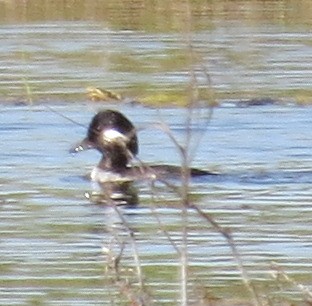 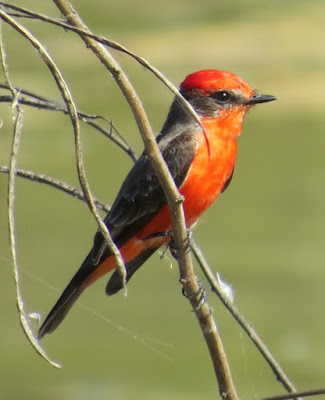 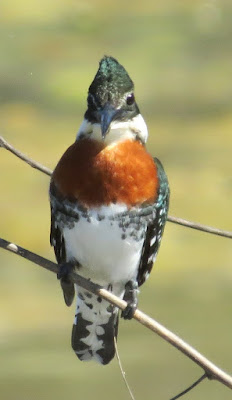 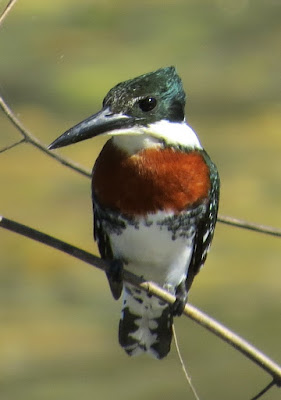 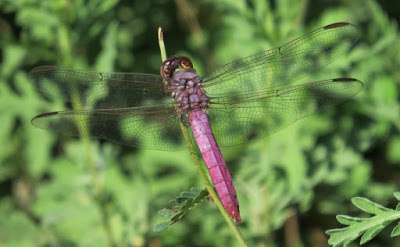 We trudged back, scaring up a pair of Inca Doves on the way, then decided to try for the Burrowing Owls on Border Road, in the ag area just north of the refuge (which is actually my Santa Ana Christmas Bird Count territory).  We went up Tower Road and then came back down Border so that the owls would be on Mike’s side of the car, but we went slow anyway in order to pick up anything else that might be around.  A pair of Northern Harriers was new for him (especially since the split of Hen and Northern Harriers), and occasionally a little Savannah Sparrow would pop up.  We passed many workers in the fields, and along with them many Kestrels on the wires, and even a hapless Ribbon Snake that had lost an encounter with a vehicle!  Coming down Border Mike actually spotted one of the owls in a hidey hole, but the bird flew before he could get a good look, then hunkered down behind the berm, never to be seen again. 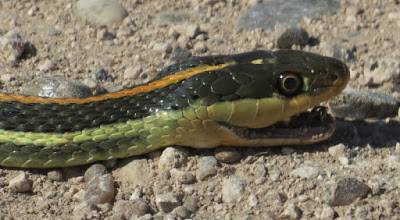 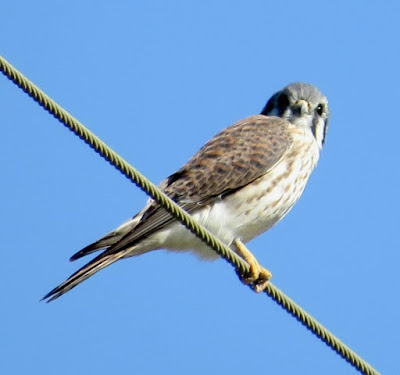 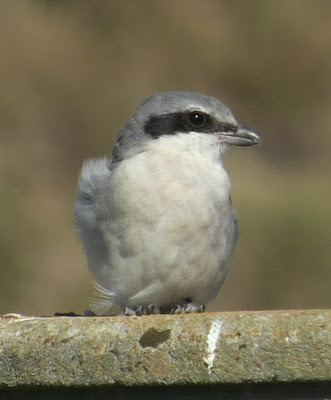 
So from there we decided to go into town to get something to eat, then check out San Juan Wetlands.  The place was closed, surprisingly, so it was decision time:  try for the owl again or head over to Donna Reservoir to close out the day.  Mike suggested the owl, and I’m glad we did that, as we headed down Stewart and then cut over on Dicker to the dirt portion, and just past Tower I heard a Sedge Wren calling in the grassy field!  We stopped to try and call it out, and Mike spotted a hovering White-tailed Kite in the process!  The wren never did come out (although it called several times), so we headed on.


We crossed a canal that had both a Great Egret and Tricolored Heron on a big pipe, and at the next furrowed field a little guy popped up next to the car and back down again; at first I thought it was a meadowlark, but as I backed up and got even with it, I was elated to see that it was a Sprague’s Pipit!  I practically shanghaied Mike’s camera from him as he never would have been able to get a picture from his angle, so he enjoyed the bird while I snapped pictures for him!  We finally reached Border and headed north – nothing.  Turned around and headed south and continued past Dicker, and I was getting ready to make another run when Mike hissed, “Stop!”  A lump of mud morphed into the Burrowing Owl sitting right on top of the berm!  And this time he stayed put!  What a cute little guy! 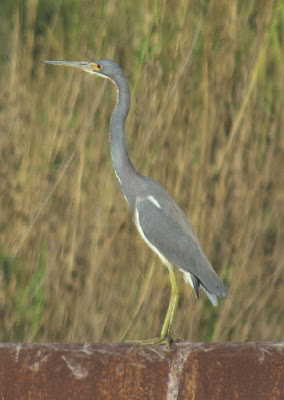 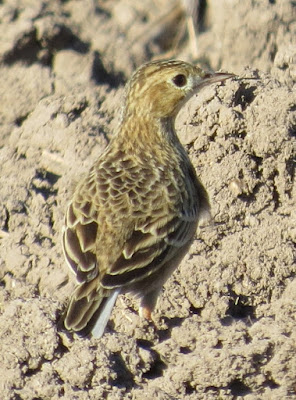 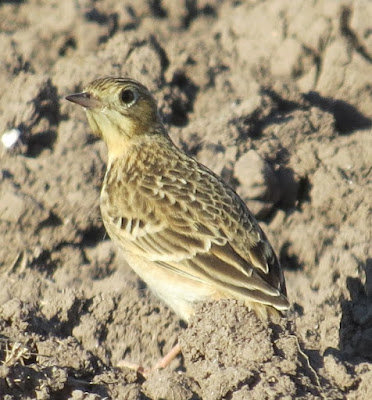 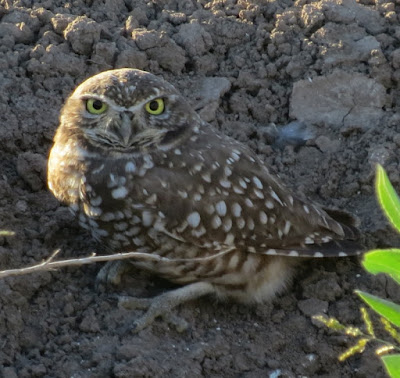 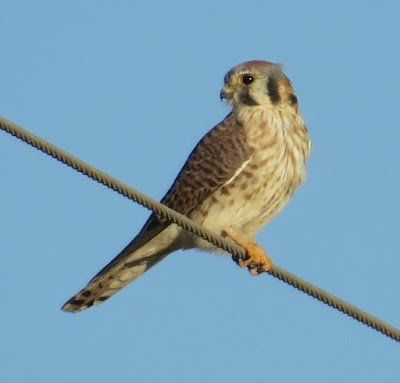 
Continuing on I made a right on Las Milpas (Mike got a laugh out of my assurances that it was a “real road” as it looked more like an unmarked mud track across the field), and we didn’t go far before a flock of American Pipits bounced over and landed next to us!  Thankfully we got scope views as there was a lot of vegetation in the furrows these guys were poking around in!


It was time to head home after that, but we didn’t do bad with 79 species for the day!  (Mike spotted a White-tipped Dove that I missed…)  Bird List: