When the Birds are Uncooperative...

Well, you can’t have it go your way all the time, and we learned that truth big time today on my third trip to Laredo to see the Amazon Kingfisher, only this time she was a no-show.  Steve and Marion had flown in all the way from California and were hoping she’d still be around (and she was indeed reported two days ago), but she was either hiding up the tributary or had flown the joint (plus we were the only birders there today, so it could be that people are just no longer looking for her).  We started off the day with the requisite grackle/cowbird mob in Alamo, then had several handsome Caracaras on the way to Laredo, in addition to some Harris’ Hawks and one “Fuertes’” Red-tailed Hawk (which led to a discussion about Hollywood using Redtail calls for Bald Eagles… J)!  Marion spotted a Merlin as we passed Kestrel after Kestrel, along with shrikes and a Green Jay I never saw as I was focused on driving!


After stocking up on snacks and chicken legs at a Stripes just outside Laredo, we made it to Dos/Tres Laredos Park (this time without getting lost J) and pulled into a shady spot under the Railroad Bridge.  Unlike the time with Howard and Pat, the Amazon was nowhere to be seen, although we had a pair of Black Phoebes, Neotropic Cormorants, an Osprey, a Spotted Sandpiper, and a Black-crowned Night Heron in the vicinity.  We decided to walk the edge of the river, and a “green type” kingfisher did pop up that got us all excited, but alas, she had white spots in the wings (plus we saw her mate nearby).  A Ringed Kingfisher flew overhead calling that was almost ignored while we were initially trying to get the scope on this Amazon wannabe!  A House Finch flew over that I heard but Marion saw, and commented on how dark it looked; I confirmed that the birds we get are probably the redder Mexican birds. 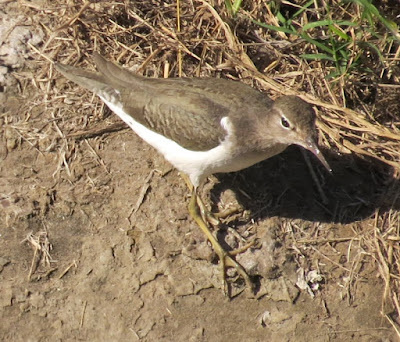 Spotted Sandpiper along a little ditch


We wandered back to the car, picking up a young Green Heron and Couch’s Kingbird for the day, then decided to take a short walk down the nice caliche road that Pat and I had taken in hopes of kicking up some seedeaters.  A Verdin actually gave pretty good views, and the regular winter visitors fed busily in the tamarisks, but there was nothing unusual amongst them.  In the cane, I did hear the whistle of a seedeater, but it never did want to come out (didn’t even call again), so that was rather disappointing (the only thing that seemed upset at our pishing was a male Cardinal). 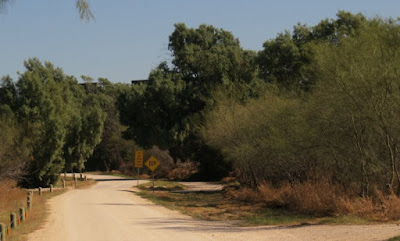 The "trail" off Eagle Pass Road 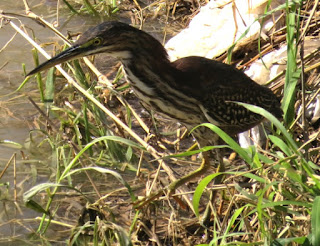 Waiting forlornly for the Amazon to show up...


We dragged ourselves back to the car and munched on chicken, and after some discussion decided to take a look at Zecate Creek, even though the chances of the bird being there this time of day (based only on previous reports) were slim, but Griffin’s report of the seedeaters from the trail there moved us onward.  This time we did get turned around trying to find the place J, and part of the problem was that some prankster had turned the street signs at the very intersection we were supposed to turn!  But we eventually got there and first scanned the creek, picking up a pair of Spotted Sandpipers, but that was about it.  We found Griffin’s trail, which was actually very scenic and pleasant:  you were bordered on the right by picturesque limestone rocks, and bordered on the left by woodland, with the cane stands closer to the river!  Being the time of day it was (and 91 degrees out L) we really didn’t get much out of that trail except some good exercise and a kettle of vultures that included a Cooper’s Hawk making dives at them once in a while, but a female Filagree Skimmer closer to the water was very exciting! 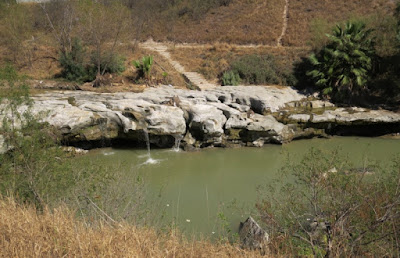 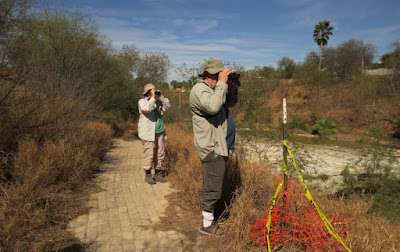 Marion and Steve scan for the Amazon... 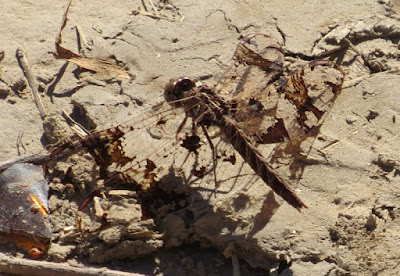 We find a cryptic female Filagree Skimmer instead! 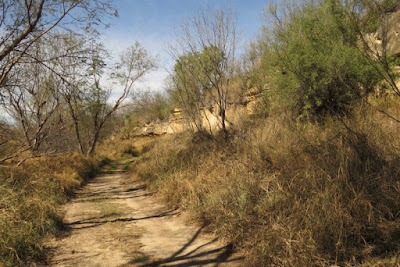 Scenic trail along the Rio Grande


We reluctantly headed home after that, drowning our sorrows (or at least mine, anyway) with a F’Real!  I was surprised we made it up to 51 species for the day (54 including the three additional ones Marion and Steve saw)!  Bird List: