Word gets around, and Keith’s friend George had shared his Amazon Kingfisher adventure with his friend Howard, who in turn made arrangements with his friend Brad to come down and add another hot bird to their ABA lists!  (Howard and Brad, like George, were “twitchers” who would readily hop a plane to chase a mega-rarity!)  Unfortunately Brad caught The Crud and couldn’t make it, so I invited my friend Pat to tag along seeing as she hadn’t seen the bird for the year yet, and off we went


It’s a long drive to Laredo for sure, but it went fast (you get Pat together with most anyone, and especially with someone like Howard who has had such a fascinating career in crystallography) and the conversation was great!  Google sends you north and west through the Brush Country, and with the sun to our backs we had stupendous fly-by looks at Harris’ and White-tailed Hawks, and Crested Caracaras!  This was the first time I had attempted to go straight to Tres Laredos Park (as opposed to going there from Zacate Creek), and after getting turned around trying to “merge” with US83, we finally got on the right road after asking directions the old fashioned way from a nice local guy (as opposed to “Ciri”, who had no clue what Tres Laredos Park was…) and found our way there without accidentally heading into Mexico! J  The bird had been hanging out by the “Railroad Bridge” (where we had seen it last time), so after parking in the pullout just under the bridge, we headed over to the little overlook, and there was lady Amazon, right where we left her last time (and we were gratified to see that she was still there after that horrific cold front last weekend)!  So Howard settled down to enjoy her while Pat scanned for other stuff, and we had a pair of Green Kingfishers and one female Ringed, in addition to a few White-faced Ibis, a couple of herons, some coots, and a Gadwall.  Howard was content to sit and watch so Pat and I explored a little of this good caliche road that paralleled the river in hopes of scaring up some seedeaters.  The most exciting thing we saw along that trail was a pair of flyover Monk Parakeets, so we headed back, and after awhile Howard was ready to go. 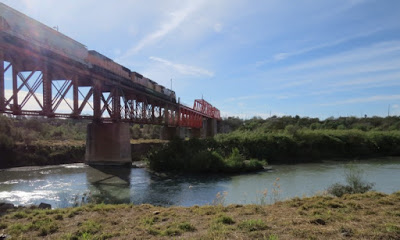 View of the "Railroad Bridge" from the little parking area 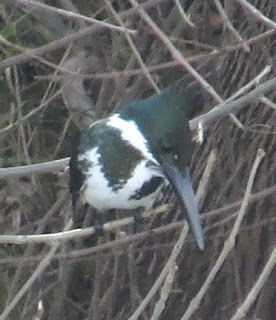 The lady Amazon Kingfisher eyes breakfast below her and readies for the plunge, showing her spotless wings that help separate her from the Green Kingfisher! 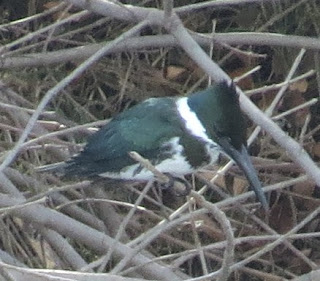 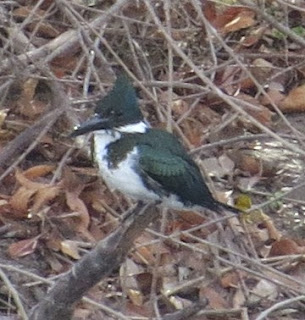 Afterwards she sits on a stick close to the river to shake off the water! 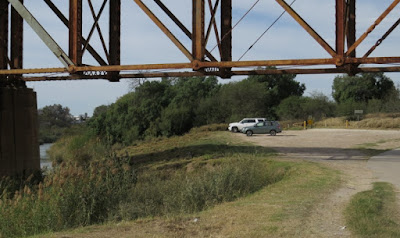 The parking area near the bridge


The Amazon was his only target, but he admitted it’s still fun to see birds you don’t always get to see, so we wheeled by Lake Casa Blanca State Park in hopes of something odd (several years ago a Slaty-backed Gull showed up, and there had been historical reports of Western Grebes and seedeaters).  Had some nice views of a few Least Sandpipers, a family of Black-throated Sparrows, and a Great Egret coming into breeding colors, but the only gulls were Ringbills, so we decided to head on to Salineño on the off chance that a seedeater might come to the boat ramp (but not before Pat talked us all into getting a F’Real at the next Stripes J). 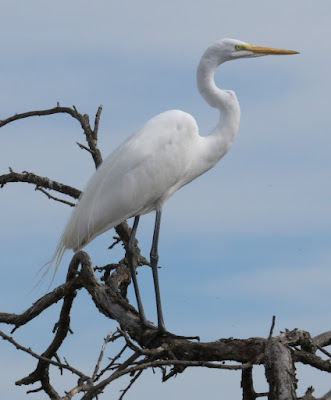 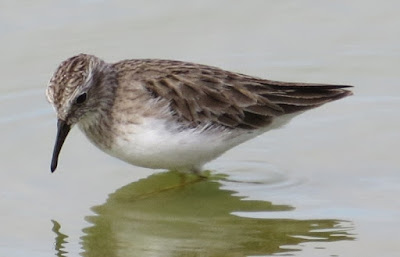 Least Sandpiper (above and below) 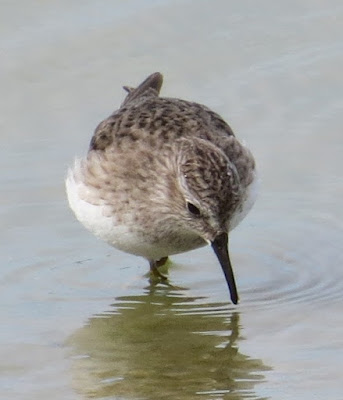 We headed on down, where Howard set up shop and enjoyed the river view while Pat and I poked down the Seedeater Trail for a bit.  It was late and very quiet, so we headed back where Howard agreed that it was time to sit at the feeders!  So we did so, where eventually all the regulars (except for Mr. Audubon) came in and put on a show; five Altamira Orioles at one time was certainly eye candy! 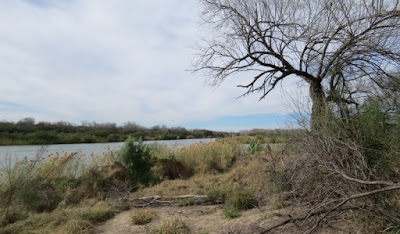 View of the Rio Grande at Salineno, and the cane that the seedeaters like to hang out in 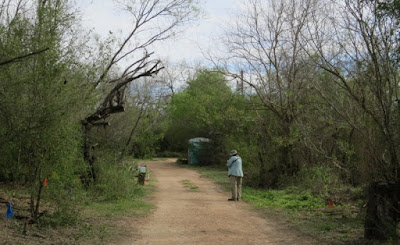 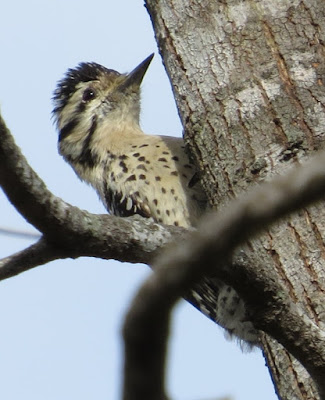 A fuzzy-headed lady Ladder-backed Woodpecker comes in for a treat! 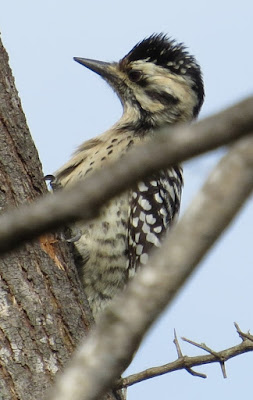 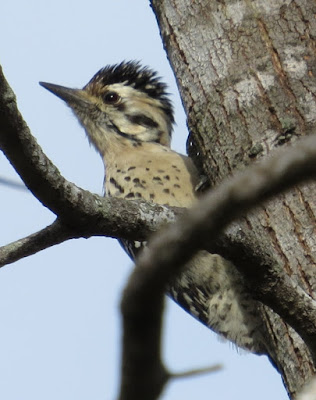 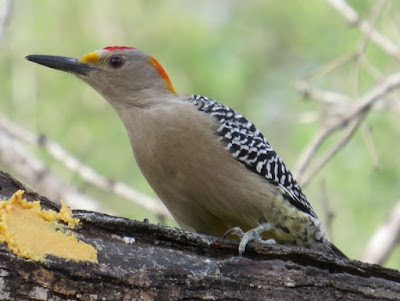 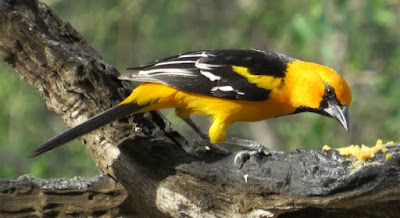 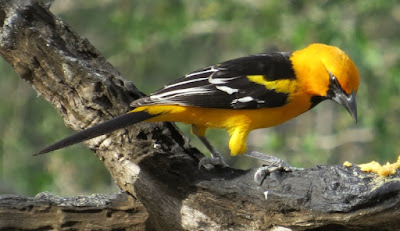 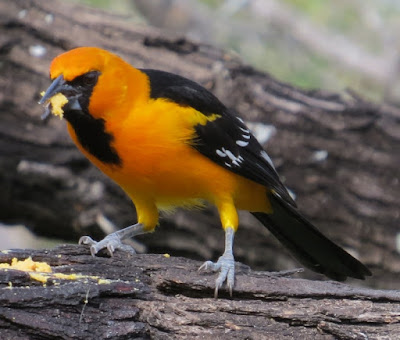 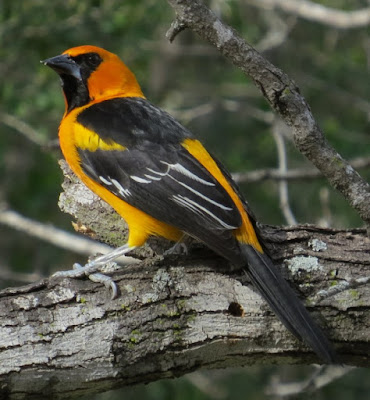 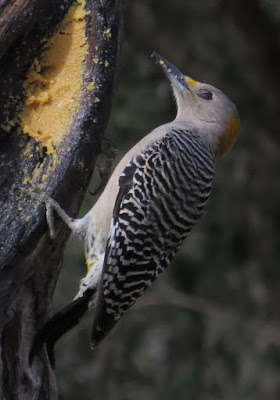 Another Golden-fronted Woodpecker (this one a female) shows her "third eyelid"!


All too soon it was time to head back, with 53 species for the day.  Bird List: