After having birded on their own for several days, there were still a couple of target birds that Robert and Denise needed (mainly for Denise as she was a new birder), so they asked if they could shanghai me for a morning to try and nail Northern Beardless Tyrannulet and Tropical Parula in particular.  There had been several of the latter reported around the Valley (a surprise in and of itself), but one of them was at Santa Ana NWR, and seeing I had heard the tyrannulet when I was there last week with Minda and Harle, I figured that would be a good place to bird for the morning, especially since a female Blue Bunting had also been reported, and the Glossy Ibis was apparently still hanging around!

Heading down Alamo Road, a flyover White-tailed Kite got the day list off to a good start, but unfortunately I was the only one to see it, even after we turned around and tried to refind it.  In the parking lot we were greeted by hundreds of flyover Red-winged Blackbirds and the Starlings hanging on the cell tower, and after crossing the levee we got a brief glimpse of a Bobcat hightailing it into the woods!  We took the beginning of the Willow Lake Trail, where eagle-eyed Robert spotted a couple of Yellow-bellied Sapsuckers on a dead tree!  Eventually winter flocks consisting of Orange-crowned and Yellow-rumped Warblers, Black-crested Titmice, Blue-gray Gnatcatchers, and Ruby-crowned Kinglets came in, but along the cutoff to Chachalaca Trail, Robert spotted a couple of Nashville Warblers!  A Verdin chirped brightly but refused to come in, and a Carolina Wren sang in the background, but as we connected with the main trail, several Altamira Orioles and Green Jays were making a ruckus, but try as we might, we couldn’t find what was causing it.  Scott (another birder staying at the Inn) was around the corner intently looking at something that turned out to be Olive Sparrows that had just flown the coop…


We took a quick look at the lakes just to pad the list:  tons of Blue-winged Teal and Shovelers were “tipping up”, and at the blind a couple of Least Grebes skittered away.  At the lake the ibis had been in last week we had a couple of snipe, a couple of Lesser Yellowlegs, and several Black-necked Stilts.  Continuing on the Willow Lake Trail, some Olive Sparrows were making little noises right beside us, and finally one ran across the path with his tail cocked, enough of a view so Denise could say she saw it! J  Then a Clay-colored Thrush tuck-tucked and finally gave a great view, but in the middle of that I heard the tyrannulet go WeeeeK!  So we hurried along and followed the calls, just getting glimpses as the thing bounced from tree to tree along with the rest of the flock it was hanging with, until finally it gave a great view out on the tour road!  High five!  On the walk out a nice Harris’ Hawk posed on a pole. 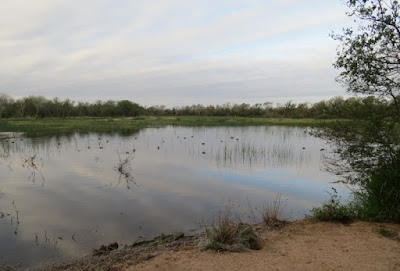 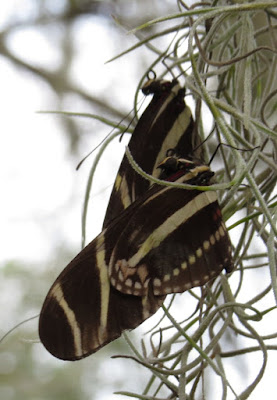 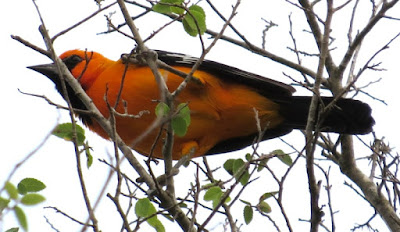 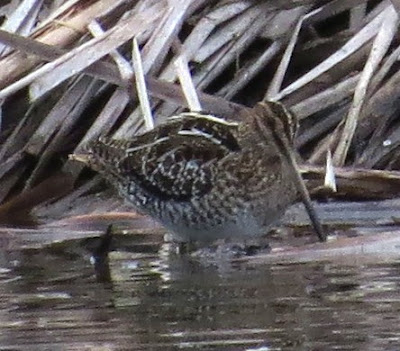 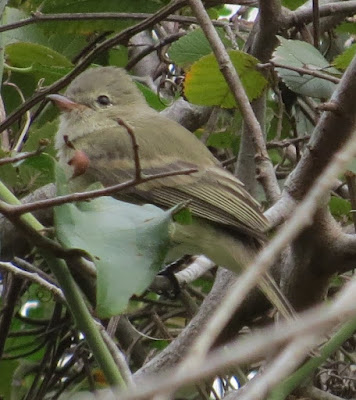 
Of the birds on our “board” at the Inn, the Mountain Plover intrigued Robert, but Sprague’s Pipit was also on his wish list, and I was getting ready to take us out to Anzalduas until I remembered the fiasco from last Friday and was afraid that maybe they’d be closed this Friday, too, due to the upcoming holiday (and the folks in the visitor’s center concurred).  So we opted to blast out to Harlingen to try for the plovers, even though they hadn’t been reported for a while (but there had been no negative reports, either…).  Unfortunately after a thorough scouring of the fields on both sides of FM 1599, we couldn’t even kick up a Killdeer, although several Caracaras and Turkey Vultures sat in the south field, along with several Sandhill Cranes.  I told them that Sprague’s Pipit was remotely possible even here, and while an American Pipit and several Horned Larks flew over, no Sprague’s sounded off, although Robert had a small bird that could have been one; we just couldn’t get a decent look.


We had to head back to Alamo at that point, so after stopping at a roadside fruit stand for a bag of oranges, we flew back home with 52 species for the morning (53 if you count the Cooper’s Hawk that Robert spotted but eluded me).  Bird List: