As a birthday present, Griffin from Connecticut was given his choice of a birding destination, and he chose south Texas! J  So on this first day of his adventure, I met him and his mom Diane outside the Inn and headed in the fog to Bentsen State Park.  They had made a quick visit to Santa Ana the evening before and bagged the easy specialties (and a couple of not-so-easy ones, including the Fulvous Whistling Duck), but still had several on his wish, including Buff-bellied Hummingbird.  So we checked out the garden feeders at the visitor center upon arrival, but instead, what should come to the feeder near the tram stop but a nice male Black-chinned Hummingbird, which was also a life bird for him!  We stopped at the canal to scan, and what should come rowing towards us head-on but a gorgeous male Ringed Kingfisher!  Walking up to the Gatehouse feeders a mob of Chachalacas gathered to await breakfast, and amongst them was a pair of White-tipped Doves!  Quickly a Clay-colored Thrush whizzed in and gave great views, and three Altamira Orioles landed on top of one of the telephone poles on the way out!  Although not a target, a pair of Black Phoebes at the canal was nice for the day list, and Griffin spotted a pair of Olive Sparrows in the bushes near the tram stop; they both agreed that for a “killing time till Anzalduas opens” spot, it was pretty productive! J

A Chachalaca stares us down at Bentsen

The mob waits for breakfast... 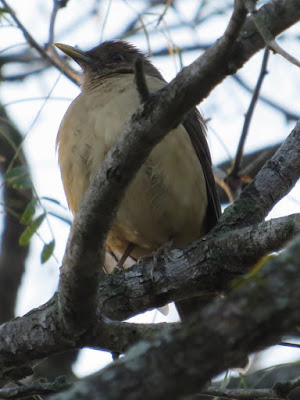 
As the spoiler stated, Anzalduas was the next stop, where we parked and got our feet soaking wet tromping across the field in search of Sprague’s Pipits!  We flushed several, and Griffin was able to get some “belly shots” as a couple of birds bounced overhead, but alas, we couldn’t corner the one bird that decided to land amongst the Western Meadowlarks.  We searched in vain for Zone-tailed Hawk, but a nice Red-shouldered Hawk posed instead.  Another target bird, a pair of Mottled Ducks, showed well, along with Griffin’s life Crested Caracara perched across the way.  Nice “non-targets” included a huge flock of Lesser Scaup, a Vermilion Flycatcher, and both species of cormorant.

The next stop was Quinta Mazatlan for Tropical Kingbird and an off chance at parrots and parakeets, but not before spotting a young White-tailed Hawk along Shary Road that we almost passed off as a Redtail as it had the classic white chest/belly band pattern!  A Tropical Parula had been reported, so when we ran into a good feeding flock with a suspicious bird, the adrenalin started flowing, but when the bird decided to give us a non-backlit view we discovered it to be a classic male Northern Parula (still good for this time of year).  The flock itself was quite varied, with Blue-headed Vireo and Black-throated Green and Black-and-white Warblers in addition to the normal winter birds.  More Chachalacas sat inches from us along the trail, and we finally got great looks at the Buff-bellied Hummingbird around a large cactus that was in bloom.  As is so often the case, the Tropical Kingbird showed up “back at the car”, along with a Curve-billed Thrasher (another “bank bird” in case they decide to split our bird off from the Arizona race). 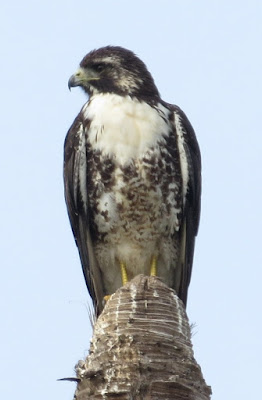 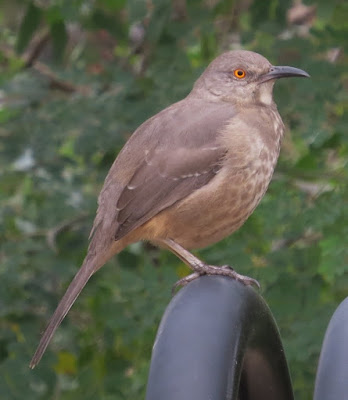 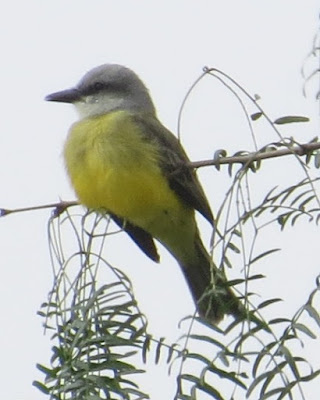 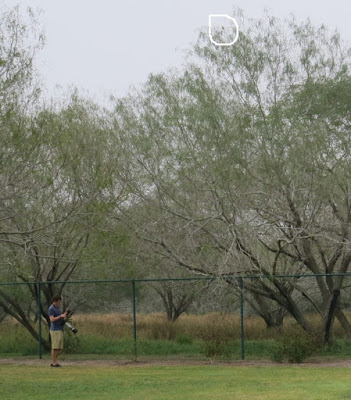 
We decided to make a return visit to Santa Ana for the tyrannulet, and indeed, we heard it shortly after hitting the Chachalaca Trail!  However, the tree it was in was right in the sun, so we continued on hoping the one closer to the tour road would sound off.  It didn’t, so back we trucked, and this time the bird called and came down low near the blind area, giving great looks!  We padded the day list with ducks and grebes in Willow Lake, and Griffin spotted a lovely adult White-tailed Hawk through the trees!


Aside from the obstinate Tropical Parula (several had been reported at various places) and members of the parrot tribe (which you almost have to plan a sunset roost trip to see), we had pretty much cleaned up on Griffin’s targets, so we headed To Estero Llano Grande for the Pauraque and McCall’s Screech Owl!  On the way Griffin thought he had a flock of Snow Geese flying in the distance, so I pulled over to check it out, and it turned out to be a White Pelican Ballet!  Once at Estero we enjoyed more ducks and grebes off the deck (including the Cinnamon Teal), picked up their lifer Couch’s Kingbird along the trail, and chuckled at Diane’s reaction to the huge Alligator in Grebe Marsh! J  The Softshell Turtle was on his same rock at Alligator Lake (along with the night herons), and as we took up our positions behind the Pauraque’s barrier, I almost didn’t see the one bird that had settled so close to said barrier that I was practically within touching distance (and he saw me long before I saw him, as his eye was on me)!  Diane spotted a second bird that was actually shuffling a little bit; they were both surprisingly sitting in the direct sunlight, and we got to wondering if they were thinking about shifting to a more shady spot…  Unfortunately the owl was down inside his box, and both the other stakeouts were not at home, either.  L 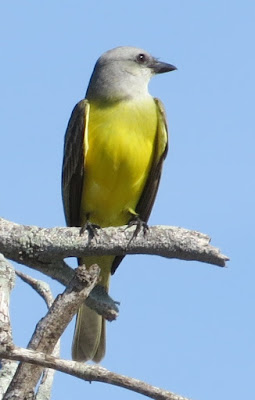 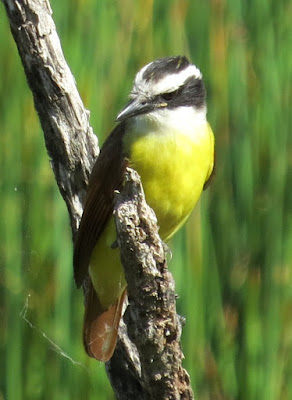 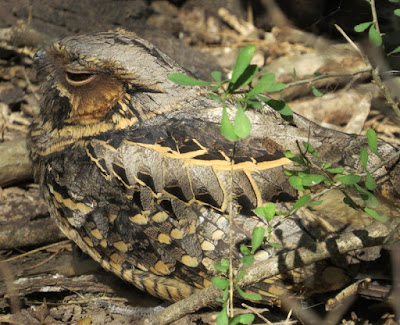 
We headed back to the Tropical Zone as that’s where Estero’s parula had been hanging, and we ran into Huck Hutchins, May and Rick Snider, Mary Gustafson, and Ben Basham all lined up on the benches patiently watching the water puddle!  Huck had indeed seen the parula earlier, but it turned out that’s not what they were waiting for:  an Ovenbird had shown up that morning!  (Diane ruefully said, “We’ll mail you one…” J)  After a few minutes Griffin and I made the loop (as that’s apparently what the parula had been doing) and managed to pick up a Nashville Warbler in with the Orange-crowns, but not much else.  We put in a valiant watch for a good long time (during which we heard Sandhill Cranes in the distance), but then decided to head on home when a visiting birder from Tennessee (whom Griffin and Diane had met at Santa Ana the day before and we had run into again that morning) offered to show us the long-lived Guatemalan Cracker that was still hanging around!  (The Blomfeld’s Beauty was seen that morning but was gone by the time we walked by…)  While looking at that Griffin noticed a raptor coming at us and then circled overhead, which turned out to be a Peregrine! 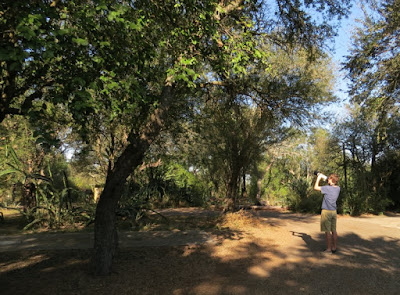 Griffin checks out a feeding flock in the Tropical Zone 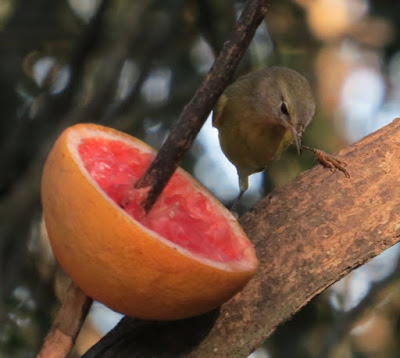 An Orange-crowned Warbler pondering the grapefruit 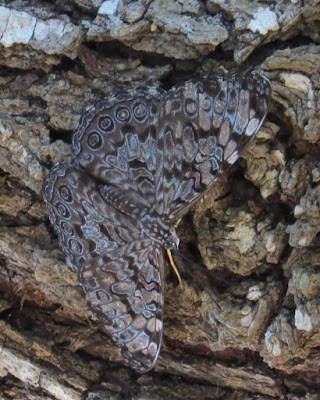 
We actually got back to Alamo a little early, so I offered to take them on a short walk down to Fannin Street in hopes of maybe at least hearing some fly-by parakeets and show them where I had found yet another Tropical Parula the day before (but as we all agreed, these feeding flocks move around and your chances of finding them again are slim).  All we got out of that jaunt was a White-winged Dove, barking dogs, and more exercise J, so we called it a day.


Griffin had caught sight of Eurasian Collared Dove and White-tailed Kite while I was watching traffic, so his two additions made it a “centennial” day! J  Bird list: