Despite our “modern sophistication,” there’s still an instinctive pall about “Friday the 13th”, so I like to believe that, contrarily, a special blessing is in store!  That certainly happened this day, as since Griffin finally got his seedeater way back up Laredo (and the anis finally showed themselves at Falcon State Park), he wanted to target the famous Brownsville Dump as a Vega Gull (the Siberian race of Herring Gull and a candidate for a split down the road) had been reported there.  Trying to find one gull in a flock of a gazillion gulls was gonna be a miracle, I knew, but there was always the chance of finding some other odd gull in the mix as well.


I don’t visit the Dump often, and when I do, the access is always different, and since they actually built a visitor’s center at the entrance (and I noticed on the way out that the old entrance office had a mural of bird paintings on its walls), the new check-in office was actually down the road a bit; the nice man brought out his book for us to sign, and we were on our way!  We had also taken separate cars this time, as Griffin wanted to stay out longer than I’d be able to, so they followed me in and up the old back road, only I noticed to my chagrin that the old “wetlands” to the north of the dump were no more!  (And there were no gulls visible on the hill, either; the garbage is always moving…)  So we headed back down and up the hill where all the action seemed to be, only to find out that we couldn’t go any further due to that being the “active area”, but that nice man directed us back down the hill and to a road that would take us to the back side of the area where they were working (out of harm’s way).  On the way over we stopped to scan some distant gulls in a wetland of sorts, picking up a few large shorebirds for the day, but then decided our best bet was to get up to where the mob was.


And what a mob it was!  If you’ve never been to The Dump, you need to go at least once to experience the thing!  Swarms and swarms of gulls floated around the bulldozers as they moved around the “stuff”, and on the ground Black Vultures and Caracaras were finding nice little morsels for breakfast (ugh) while White-tailed Hawks waited in the wings (I noticed with some amusement that the latter two species were all youngsters – no adults hanging out there)!  A few Chihuahuan Ravens also hung out on the fence, the wind showing their white neck feathers very nicely!  But the gulls were the big show, so we set to work studying those that actually sat down next to the rubbish.  Mostly Laughing Gulls, with a handful of Ring-billed and “regular” Herring Gulls, and I was wondering how in the world I was gonna pick out this bird with a “shade darker” mantle and darker eye, when suddenly Griffin found it!  We all got on it, and it was true:  once you saw the thing and saw how different it was from the other Herrings (he also had a lot of dark mottling on the head), he really stood out!  Superficially, he reminded me of a California Gull with pink legs, as they often have the same amount of mottling on the head, and the mantle shade is about the same, along with the darker eye. 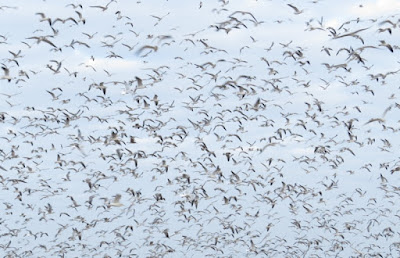 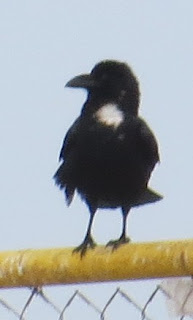 Fuzzy Chihuahuan Raven, showing why they used to be called "White-necked Raven" 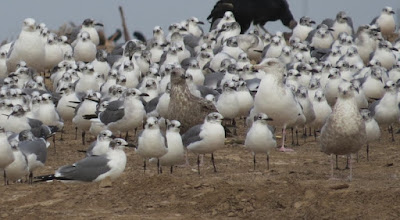 The mob consists mostly of smaller Laughing Gulls, but also has several Herring Gulls of various ages mixed in. 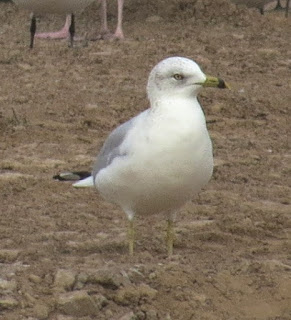 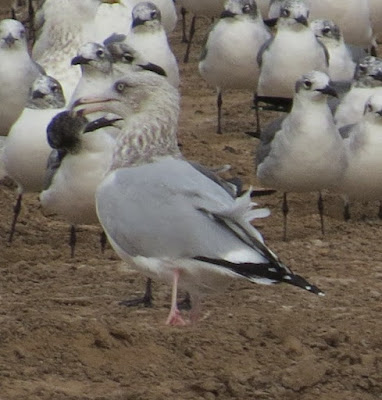 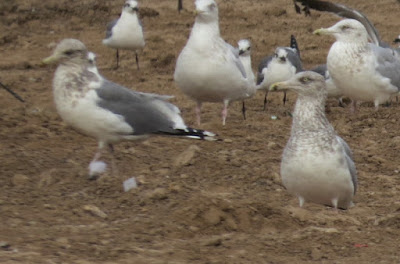 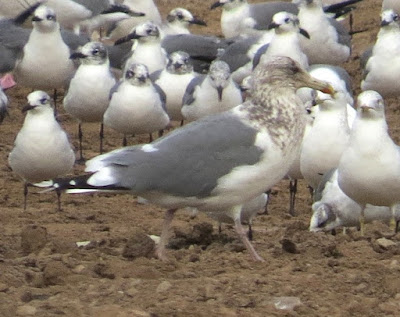 The darker eye also helps separate him from the other Herrings. 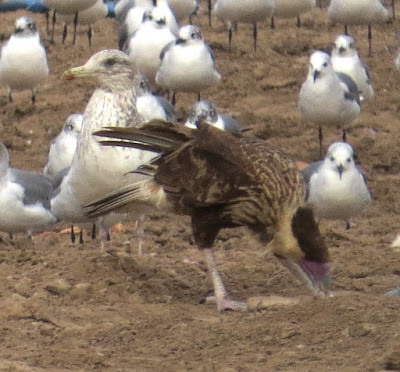 Here he tries to hide behind a young Crested Caracara... 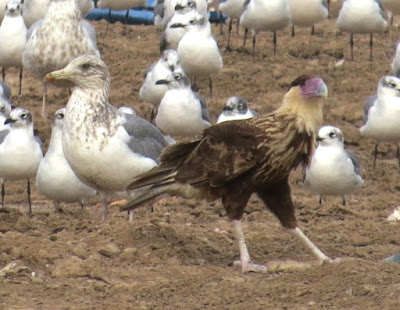 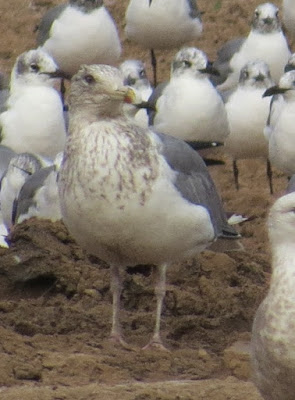 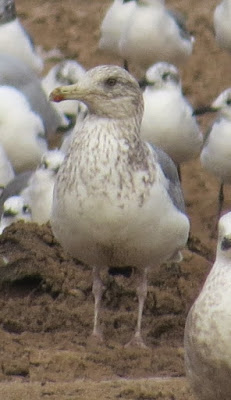 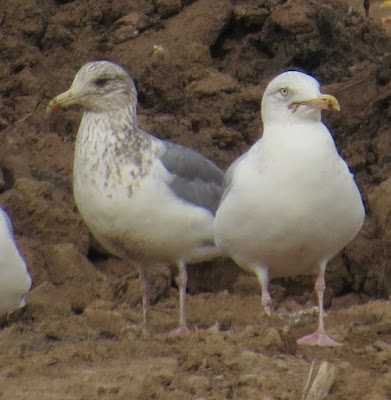 Here he is with another "standard" adult Herring Gull (at right) 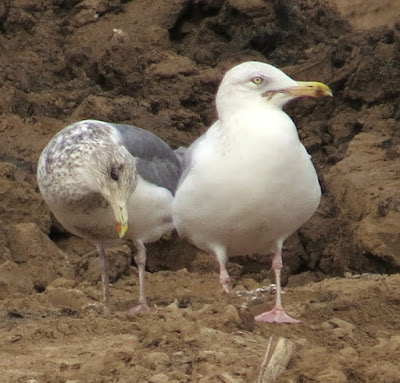 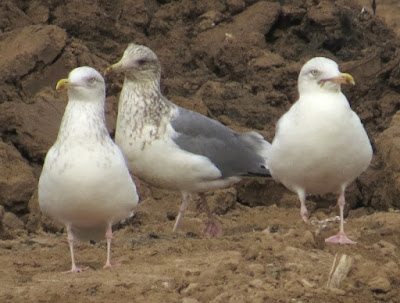 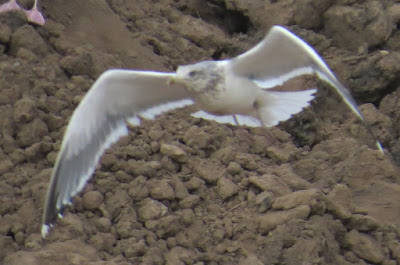 
After enjoying him, we bumped down the road (I was amazing that their little white sedan didn’t bottom out) and headed up to South Padre.  At the Convention Centre (where some kind of market-like event was going on as the place was absolutely packed with people) everyone piled into my car and we headed out onto the flats, which I warned could look a little “scary” to people who weren’t familiar with the (in reality) hard-packed beach with a lot of deep pools strewn all over!  We drove close to a flock of resting larids, but not too close as we noticed someone with a monster lens set up taking pictures, so we got behind them and scanned the flock for Griffin’s only remaining Valley target, the Sandwich Tern!  We initially couldn’t find one (although there were lots of Royals, Forster’s, and Skimmers around), but other nice birds included both flavors of Reddish Egret, Marbled Godwit, Ruddy Turnstone, and a Common Loon out in the bay.

Bumping down the hill to the exit

Brown and White Pelicans together 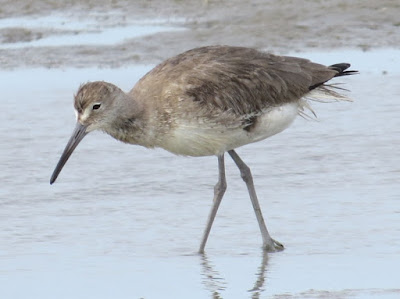 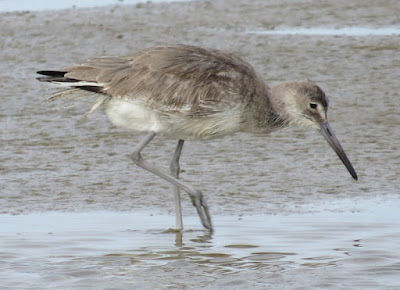 Griffin studies the flock while others beach-comb and photo-shoot... 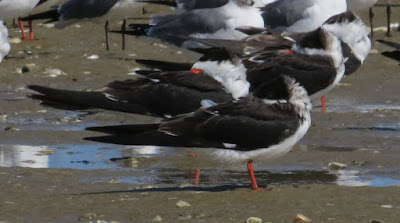 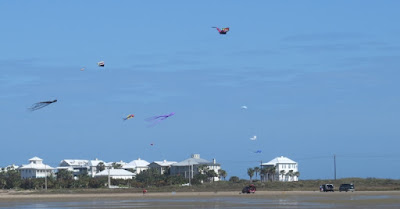 
After awhile they let me talk them into checking the back of the Convention Centre, where a couple of Sedge Wrens calls and one of the flocks was in better light, but no Sandwich Tern.  So then we went down to the Hwy 48 Boat Ramp, as the Sandwich had been seen there a day or two previously, but didn’t get anything out of that trip but a Yellow-crowned Night Heron for the day. L  So we decided to head back to the flats and just wait it out, and patience finally paid off when one lonely little Sandwich Tern showed up in the flock!  That was all we needed!


Griffin was curious about Sabal Palm Grove (and thought it’d be nice to see a Yellow-throated Warbler, although that really wasn’t a target), so we headed down there, and found out that three Tropical Parulas were hanging around down there!  We didn’t run into any of them, and the wind was really starting to whip up, so we headed to the Big Blind willing a Masked Duck to show up J, but the best we could conjure up was a Mottled Duck that definitely had some Northern Mallard blood in him as he had a curly tail!  A hike around the Vireo Loop added a shy Yellow-bellied Sapsucker to the list, and a little feeding flock had a Nashville and Wilson’s Warbler in with them. 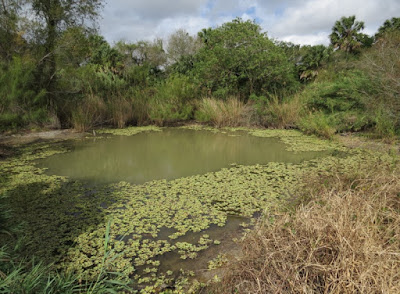 Scene along the Resaca Trail at Sabal Palm Sanctuary

I had to head home about that time, so we kissed goodbye and went our separate ways!  With three additional species seen by Griffin, our day total was 70 on the nose!  Bird List: