I'm calling it "Part 2" because "Day 2" of their adventure was Wednesday when they went up to Laredo on their own to get the Amazon Kingfisher!  Yesterday's adventure was an attempt to bag Aplomado Falcon and Cassin’s Sparrow along Old Port Isabel Road (OPIR), and if possible, the Tropical Parula and Groove-billed Anis that had been reported at Laguna Atascosa.

It was a cool, relatively calm day, and the cloud cover was helpful in that we weren’t looking right into the sun going northeast on OPIR.  Our first stop interestingly had an Olive Sparrow singing from the brush across the field, and a White-tailed Hawk posed on top of one of the railroad crossing barriers (that come down when a train is coming)!  The hacking platform was empty, and no falcons were about, so we just went slow and stopped every mile to see what we could scare up.  Long-billed Curlews were very common and cooperative (and noisy J), and several stops at some “seeps” failed to kick up the Cassin’s.  But finally a flock popped up along the side of the road that had a couple of Savannah Sparrows, but also a great look at a classic Cassin’s!  That was Griffin’s 500th bird, so it was cause for celebration!  But what got me more excited in the group of warblers was a tail-pumping Palm; since Griffin was already out of the car shooting the Cassin’s, I yelled, “Griffin!  Get a picture of that Palm Warbler!”  After several “Where?!”s I was finally able to point the guy out before the flock moved over to my side of the road and I was able to document it as well!  Not a life bird for Griffin (common fall migrant where they are), but an exciting bird for these parts! 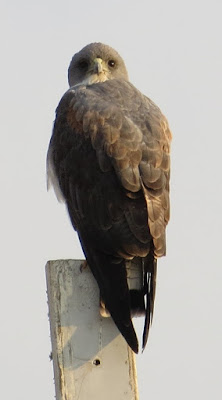 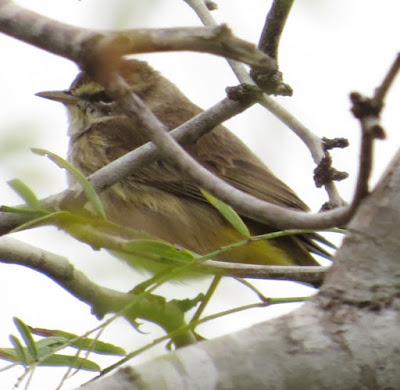 
Continuing on, we were watching the tall power poles, when Griffin spotted something suspicious, and a scope view did indeed reveal a pair of Aplomado Falcons, but waaaay over there!  Miraculously a White-tailed Kite showed up on the scene and the falcon pair went after it (or maybe it was the other way around – it happened too fast), and the next thing we knew the pair landed on a utility pole practically next to us!  What views!  We were debating whether it was a pair or siblings (I incorrectly assumed the buffy coloration on the rear of the supercilium was indicative of a younger bird, but it’s not), and in looking at the pictures, one of the birds looks slightly larger, so it could have been a mated pair.  Definitely thrilled with that! 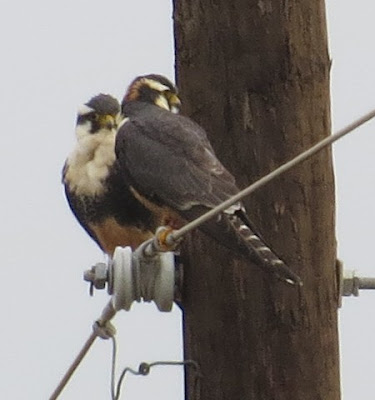 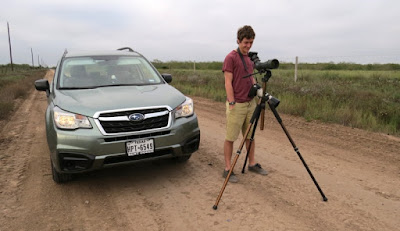 
The powers that be must have recently graded the road, because OPIR was actually in terrific shape (relatively speaking)!  We made it through to SR 100, adding a couple of Caracaras guarding a No Trespassing sign, and some Great Blue Herons and Mottled Ducks in the canal.  Just past the canal I thought I heard some suspicious chinking, so we got out to see if what I was hearing was a Sedge Wren, as it was perfect habitat!  There was definitely a House Wren burbling and scolding in there, and one stubborn wren sure was acting suspicious, but never would give us a view, so we finally gave up and headed on.  While pointing out the other traditional falcon-viewing spots, a Chihuahuan Raven posed on a wire while another flew overhead! 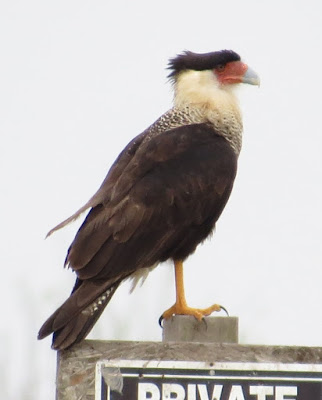 
Crawling through Laguna Vista and onto Buena Vista Road, I again heard a suspicious wren, and once again we got out to check; this time there was no doubt about what I was hearing, and bird seemed to be responding to the tape, but all it did was give us a fleeting view as it darted from one bush to the next.  I consoled them with the strong possibility that they would get tons of ‘em up at Attwater Prairie Chicken NWR!


We continued to crawl up Buena Vista Road, having a small flock of Sandhill Cranes fly overhead and a whole power-line full of Couch’s Kingbirds!  The refuge had been closed for three days, so no one had any recent reports of either bird, so we made an initial wander around the VC area and Kiskadee Trail, enjoying Green Jays at the feeders, but that was about it.  We then headed out to Osprey Overlook where there was an absolute mob of egrets and ibis on the shore, plus gobs of Ruddy Ducks in the water (along with a couple of alligators that were exciting the non-birding tourists J)!  Griffin spotted a huge pod of Pied-billed Grebes engaged in a feeding frenzy on the point, and he also had a white egret that he was hoping was a white morph Reddish, but struck me as an immature Little Blue, as the legs were greenish and the base of the bill was pale blue.  A Roseate Spoonbill fed “like an avocet” he noted; his life birds had flown over at the Stripes earlier, but this was a much better view! J 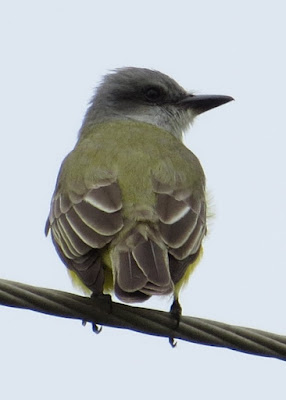 One of at least ten Couch's Kingbirds 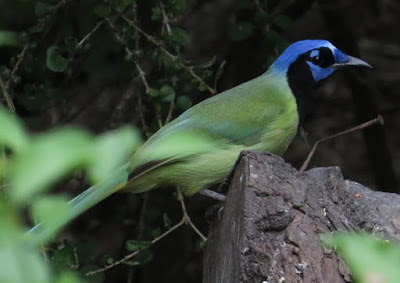 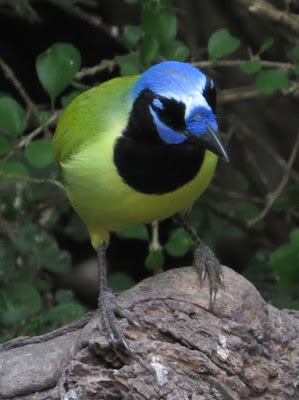 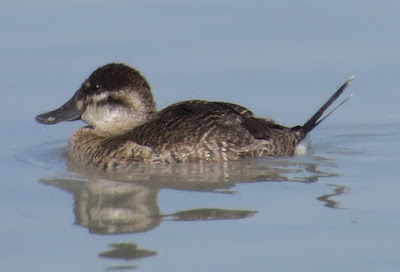 
From there we hiked a bit of the Scum Pond Trail, where apparently anis had been reported, but we didn’t want to do the whole four-mile round-trip hike, so we just hiked in as far as the trail split and then came back.  A suspicious-looking flycatcher flopped around and “pupped” but refused to give a good look, and I had thoughts of Mary Gustafson’s Brown-crested Flycatcher, but alas, it didn’t cooperate.  An Eastern Phoebe on the way back was more cooperative, but the walk was better for exercise than anything else… 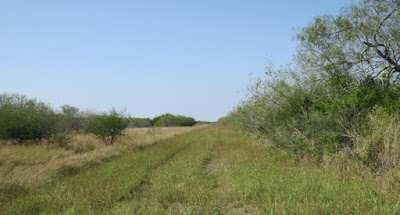 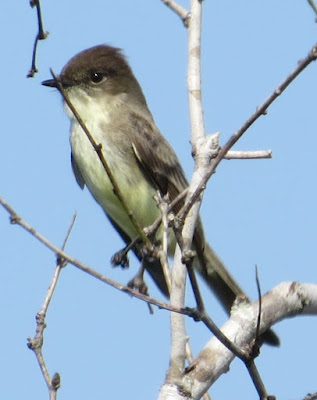 ...and only finding an Eastern Phoebe


We decided to spend the rest of the afternoon waiting to see if the parula would show up, so we split up, and I took the VC shift, finding a pair of mating Mestras in the process!  I eventually heard a feeding flock that led me over to the Kiskadee Trail where Griffin was, where he had a couple of tyrannulets that were pretty good for Cameron County, but otherwise just had more Orangecrowns, titmice, and a Black-and-white Warbler.  We split up again, and I heard some rustling in the leaves, wondering if it was Griffin’s Indigo Snake he had seen earlier, but it turned out to be an Armadillo!  Griffin had found me again by that time, and when I whooped at his little ears (the Armadillo, not Griffin), he suddenly looked up and started running towards us!  What a look!  Unfortunately the only decent shot I could get was his rear end heading back into the bush… 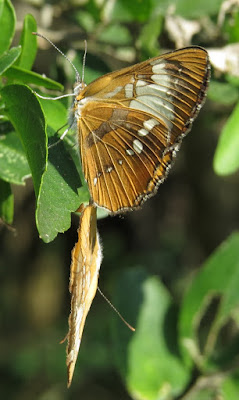 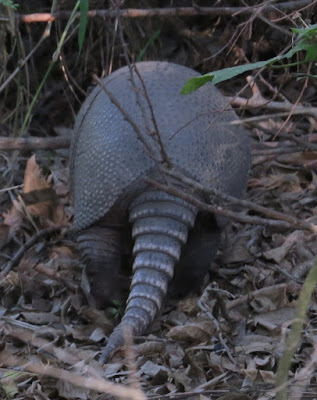 South end of a northbound Armadillo...


Diane wondered if it might be profitable to try for the Santa Ana parula again before our time totally ran out, so we headed back towards Alamo, picking up a Roadrunner on the way out.  But after some on-line EBird research, it was concluded that the Santa Ana parula was being seen in the volunteer “camp” (which is off limit to the public), so he suggested cruising the neighborhood and listening for feeding flocks, hoping my Tropical Parula would make an appearance!  We did run into a flock, but unfortunately Griffin’s camera decided to malfunction about that point, so we called it a day. 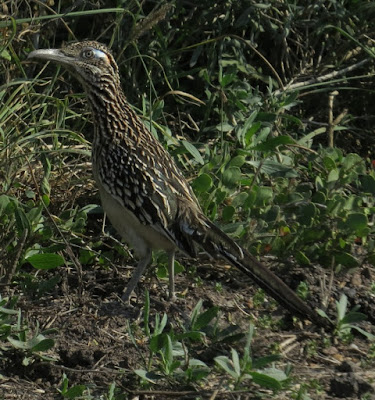