Target Birds for a Baritone


Don from Massachusetts was a member of the “700 Club”, wanting to come down and clean up a few missing South Texas specialties, so he scheduled a day of birding with me before his trip to the King Ranch.  This time of year, I generally split up a full ten-hour guiding day in order to avoid the hottest time of the day, so I had the time perfectly laid out between an early-morning jaunt to Salineño et al, then an evening cruise down 10th for the Green Parakeet show.


Well, long story short, he was delayed in getting here from Houston, so actually ended up getting to the Valley the morning we were scheduled to go to Starr County!  This time of year that is one place you really have to get to by sunrise to avoid melting, so after a quick freshen up we went to Quinta Mazatlan instead in hopes of getting him his parakeets, as they were nesting there.  It was a lovely day, and a Curve-billed Thrasher greeted us just as we pulled into the parking lot!  It was also the first time I’ve had to use the overflow, as it looked as though they were getting ready to have a wedding (or something) on the grounds and the parking lot was stuffed!  It turned out fine, however, as there were very few people on the trails.  Don is a cancer survivor and was just getting his “sea legs” back, so we went slowly and had a gorgeous male Ladder-backed Woodpecker even before getting through the gate, a pair of flyover Red-crowned Parrots, some Chimney Swifts flying over for his trip list, and enjoyed the tame Chachalacas escorting us to the visitor’s center!  After paying the entrance fee we poked along the trails, sat for awhile and listened to the White-winged Doves drowning out everything else J, then headed for the Ebony Grove. 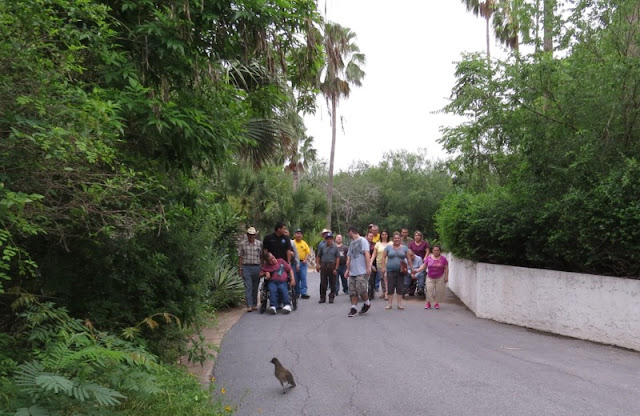 A group at Quinta Mazatlan enjoys the "official greeter" (Plain Chachalaca)!
Only, horror of horrors, it was closed off!!  We could hear the parakeets, but just couldn’t get enough of a window to see them.  I left Don to keep watch and went back to the VC to find out if we could get special permission to go back there, explaining that I had a friend who came all this way just to see the parakeets!  I ended up talking to the supervisor, and she explained that even the staff isn’t allowed to go back there due to construction going on!  Perfectly understandable, so I thanked her and went to find Don with the disappointing news, hoping one would at least fly over (which they did, but it was such a brief look that it really wasn’t “countable”).


After the rough trip down from Houston, Don was pretty beat, so we headed home after that, sharing stories of leading tours, as he’s also organized some small groups (including chartering a helicopter to see the Himalayan Snowcocks in Utah), and about his career as a operatically-trained bass/baritone!  After a good long rest he was ready to hit 10th Street that night for the Parakeet Show, and thankfully we heard them near Dove on our return leg from Trenton (they can show up anywhere along 10th between there and Nolana)!  We ended up pulling into the Lowes’ parking lot (that in itself was amazing to Don – that these little guys favored such urban settings), and he was in hog heaven as a large group of them settled on the wires and proceeded to cuddle and preen each other, and make all sorts of racket!  Don was thrilled! 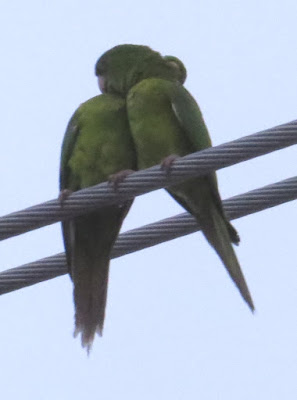 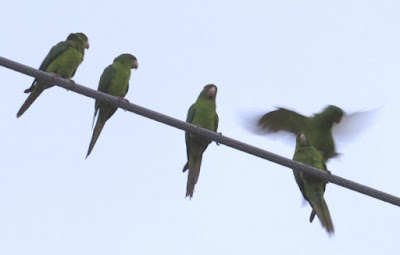 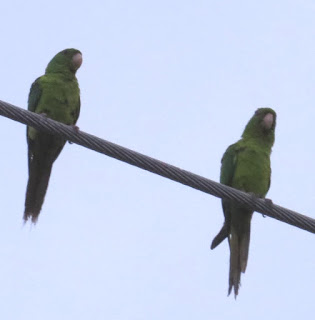 His King Ranch tour was the next day, so we made plans to head up to Salineño the day after that.  He successfully bagged three targets there (Ferruginous Pygmy Owl, Groove-billed Ani, and Tropical Parula), but the next morning I was the one with health issues and had to back out!  He was happy to drive out to Salineño on his own as he had been there previously for the seedeaters and knew exactly where to go to try for Red-billed Pigeon and Muscovy Duck.  He sent the live play-by-play via text J and got to see Audubon’s Oriole, Olive Sparrow, and Pyrrhuloxia, but not the targets, unfortunately (which which can be tough, anyway).  After that he headed straight to Houston for the flight home, hopefully a happy camper (he sounded pretty happy at the boat ramp, anyway J)!