A Dane Makes a Detour - Part 3


The next day we headed out a little earlier in order to get to Sabal Palm Sanctuary by opening time.  Per reported that his trip to Estero Llano Grande SP and the Weslaco Parrot Roost was a great success, so we headed out with great hopes of yet more life birds!


After a little detour (they’re again working on that stretch of FM 511 between Reuben Torres and Boca Chica) we made it to the turnoff to Sabal Palm, where we stopped along the entrance road in a vain attempt to spot a singing Dickcissel (we concluded that he was on the other side of the border fence).  Lots of Couch’s Kingbirds serenaded us, and after paying our entrance fee, we opted to sit at the feeders for awhile seeing as they had just filled them.  We were surrounded by White-tipped Doves, but it took them awhile to come in, and before long a raggedy-looking Green Jay also dove into the pile of feed on the webcam table!  A Buff-bellied Hummingbird and Black-crested Titmouse made a brief appearance, but that was the extent of the feeder action.  We then took the main loop in hopes of spotting Altamira Oriole (we did come upon a nest) or scaring up a Green Kingfisher, but nothing cooperated; even the reported Yellow-green Vireos had apparently moved to the National Butterfly Center… J  We did manage to kick up a young male Hooded Oriole, but the big disappointment was that there wasn’t a bird to be found in the big resaca, even with plenty of water!  We were hoping to pick up the Least Grebe here, but except for a whistling duck that flew over the treetops, it was quite dead. 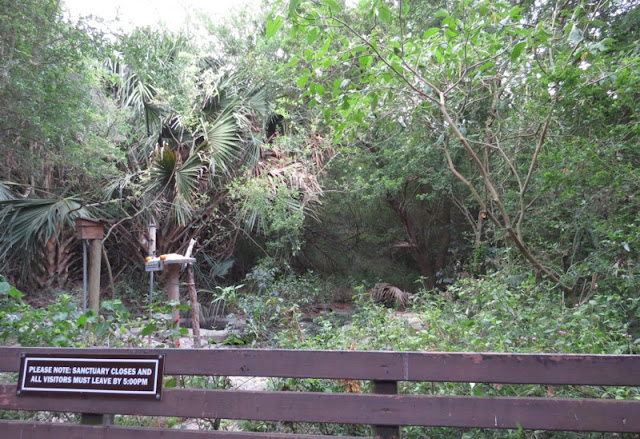 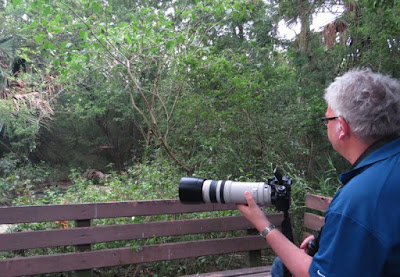 Per waits for his life Green Jay to come in!

Lots of Giant Swallowtails were on the wing. 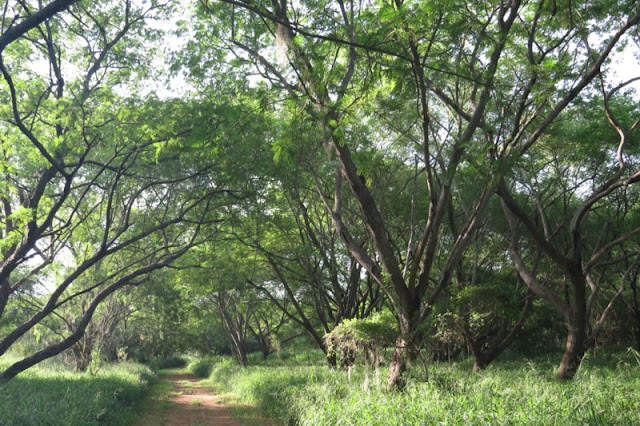 The upper trail in the morning light 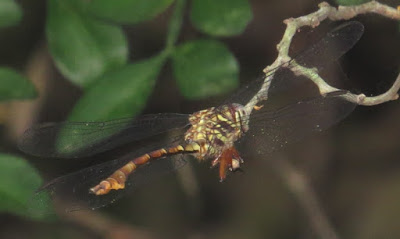 From there we headed straight to the car and went the back way to Boca Chica Boulevard, picking up a nice White-tailed Kite and what looked like a Swainson’s Hawk being chased by something.  Once on the main drag we tootled past the checkpoint and stopped at the appointed pulloff, and thankfully the resident Aplomado Falcon was resting on the nesting platform, right where he was supposed to be! J  That made up for the Least Grebe, but amazingly what should Per spot as we rolled past one of the roadside wetlands but said Least Grebe!!  He got a good enough look to positively ID it before he dove (the grebe, not Per), and just down the road was a Pied-billed Grebe for good comparison!


Continuing on, we found a beautiful White-tailed Hawk close to road eating his breakfast of gopher (or whatever it was – it was pretty big), and turning down the good dirt road that goes into the open tract of the NWR, a Bobwhite was standing sentry on the parking area fence and showed no interest in moving!  We both thought maybe he was stuffed until he moved his head a little! J  Down the road we heard more Dickcissels and got a passable view in the sun (he threw his head back and sang, so that was good enough for Per), and a Botteri’s Sparrow also gave a distant, heat-wave saturated view as he sat on a palm spike (thankfully he started singing as well)!  Per got a kick out of the Willet that came over to investigate us and sat on the wire to do so!  Cactus Wrens were singing in the cactus patches, but refused to come out, so that turned out to be Per’s nemesis bird.  A Blue Grosbeak was also singing, but try as I might, I just couldn’t spot him.  In the wooded area Per spotted an ani that I missed, but we were almost back to the paved road when Per spotted his Blue Grosbeak on the wire!  Yippee! 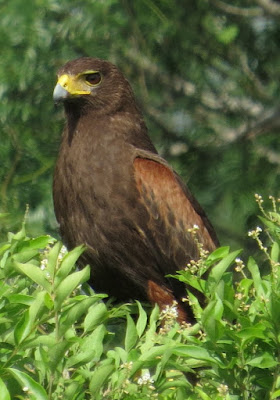 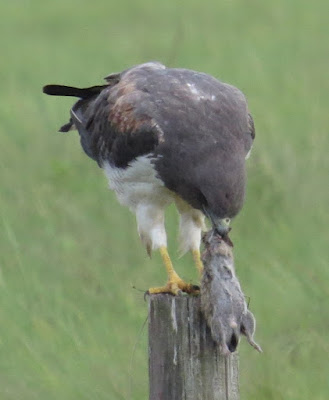 A magnificent White-tailed Hawk and breakfast... 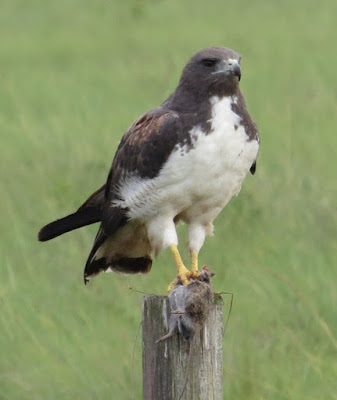 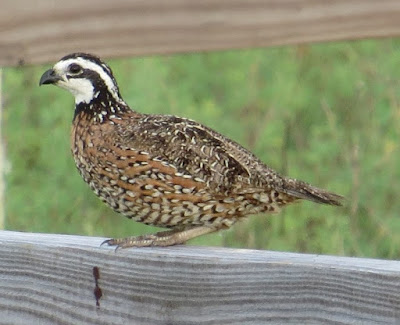 
Continuing down, we stopped at a couple of flats with water, and got distant but passable views of Reddish Egrets and a Snowy Plover.  We turned down the road to the Rio Grande just so Per could say he saw it, and picked up Royal, Sandwich, and Gull-billed Terns for the day.  Another open area had a  bunch of waders that included a spoonbill, which Per was thrilled to see!  At the end of the road the beach was in great shape, so we headed towards the mouth a little, when a cute little Snowy Plover showed up right next to the car!  Both he and a Least Tern played leapfrog with us, but what really surprised me was a flock of Semipalmated Plovers in with some Sanderlings – I didn’t think they were supposed to be here now!  But EBird liked them, so we’re good… J  Also had some Ruddy Turnstones, but because we didn’t know which way the tide was going, we opted to turn around and head back. 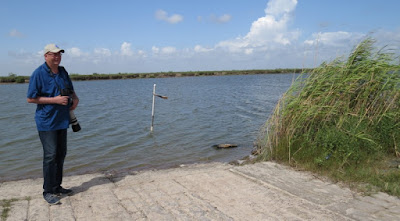 Per at the Rio Grande 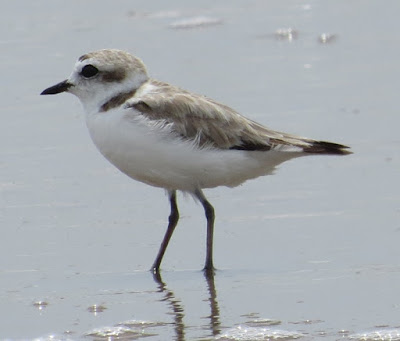 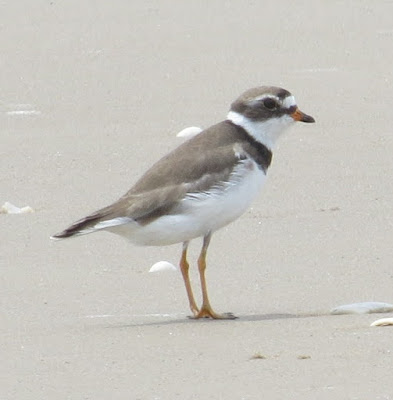 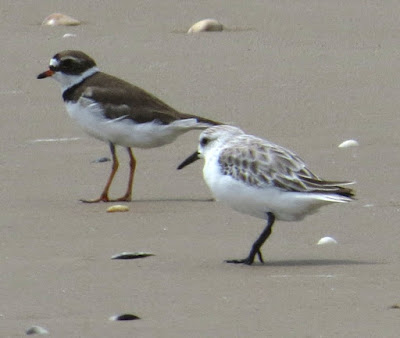 With a Sanderling at right


Per checked on his list while we drove back, and he was thrilled to report that he broke the 100-species goal for this trip (and I think he said he had over 40 lifers)!  And we still had the evening shift to go!  Altamira Oriole was high on his list, so after consulting Birds-Eye (an app that ties into EBird data), I saw where one had been recorded in the Santa Ana parking lot, so we headed down there around 6:00.  We had the whole place to ourselves at that point (except for a Border Patrol guy who wandered in to use the facilities), and while I heard no orioles, we had no less than three Clay-colored Thrushes song-battling in the picnic area!  A Chachalaca posed nicely on a dead tree, and a Buff-bellied Hummingbird was glued to one of the feeders in the manner of the Bobwhite we saw earlier J, but since nothing else was coming in, we decided to head on to Hidalgo, as Per had never seen Monk Parakeets, and it would be a good time-killer until the Green Parakeet Show. 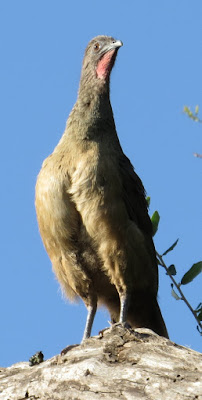 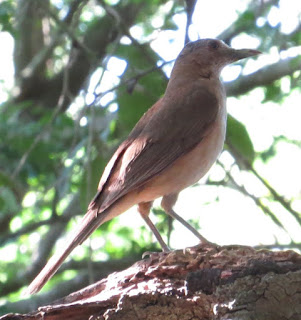 Clay-colored Thrush hiding in the woods


As we rolled down Bridge Street and onto Gardenia, I was pointing out the old pumphouse when suddenly a smallish raptor flew overhead and seemingly into a tree!  Per got a better look at it than I did, but as I turned the corner thankfully the thing called – a Gray Hawk!  We couldn’t refind it, but Per was happy with his look, especially after consulting Sibley!  While we were there we also picked up Tropical Kingbirds for his life list, and a Western Kingbird for his trip list.  Continuing on Gardenia, it didn’t take long to see the ginormous stick nest on the telephone pole and a couple of Monk Parakeets attending it!  The light was perfect, and we both got some nice shots!  We were also treated to long lines of Purple Martins staging! 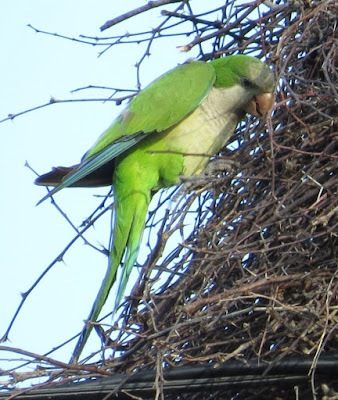 Monk Parakeet attending its stick nest
By then it was time to head up 10th, so we made a brief stop at Quinta Mazatlan (at least the parking lot, as they were closed already) and picked up Inca Dove for the day, but nothing else.  The last time we did this exercise with Don, the parakeets were in the Lowes parking lot off Dove, so I decided to roll in there just to check.  We didn’t see anything initially, but as I pulled into the drive to turn around, we heard the characteristic squawk of the parakeets further down the pike, and there was a pair on the wires, again in perfect light!  They flew over to the top of the building where three or four other birds were, so mission accomplished!  Per passed on continuing the cruise in hopes of seeing “The Show” (where hundreds of parakeets stage on the wires), so taking the morning and evening shifts together, we wrapped up with 86 species for the day!