A Dane Makes a Detour, Part 1


He knew it was the hottest time of the year when he made his reservation, but with a business trip scheduled in the eastern US, Per from Denmark didn’t have much of a choice! J  But the good news was that it was his first time to the Valley, and there are always good birds to see any time of year!


The normal guiding routine is to leave the Inn at 7:00 am and return at 5:00 pm, but this time of year is too blasted hot for that schedule, so my modus operandi is to basically do what I would do if it were just me:  plan on being at the target area by sunrise and quit by noon.  Then, since the client is entitled to ten hours of birding, we work backwards from sunset and use the remaining hours that way.  Today’s target area for the morning was the La Sal del Rey driving route, as some of his “most wanted” birds included Roadrunner, Bobwhite, and Scissor-tailed Flycatcher (along with raptors), and all of those are reasonable along this route.


We headed up around 6:00 and actually got to the starting point before dawn, and quickly added the common “wire birds” such as Couch’s Kingbird and Brown-crested Flycatcher.  Bronzed Cowbirds made an early appearance and soon became junk birds, and a little down the road we were actually able to coax an Olive Sparrow and Yellow-billed Cuckoo out in the open, both very tough birds to actually see sometimes!  We didn’t have to wait long for our first Roadrunners (always a delight), and his first Painted Bunting in horrid light soon gave way to lots more in perfect light, a knock down gorgeous sight!  But what knocked me over was a Verdin that came right out in the open of its own volition; I can’t tell you the number of times I tried to pish one out, but to no avail!  A real treat were all the Groove-billed Anis we saw along the course of the route; they almost became ho-hum! J

Per along Brushline Road at first light 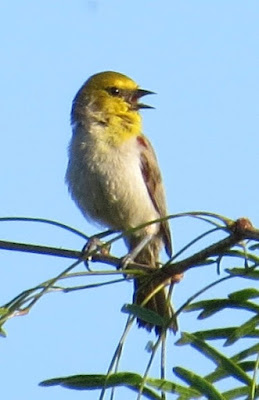 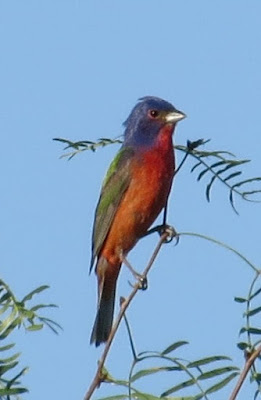 
Arriving at the trailhead to the salt lake, it was obvious that I hadn’t been there in awhile as the place was really grown up from what I remember!  We finally got great looks at a Bewick’s Wren, but unfortunately Per missed the Summer Tanager that flew right over the trail! L  There was nothing at the lake but a pair of Killdeer, but there was lots of water and it was a pretty sight. 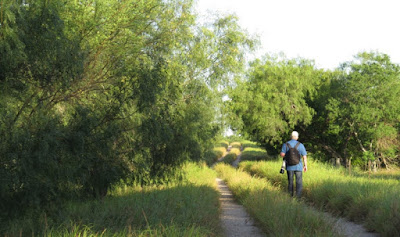 Trail to the lake


Heading on down the road we got great looks at Caracaras on the posts, and eventually his Scissor-tailed Flycatchers starting showing up and showing off!  We had been hearing Bobwhite all morning, and finally a pair here and there would appear by the side of the road and run on ahead of us, their little heads wobbling back and forth!  More Roadrunners showed up (including one that jumped up when I “messed” with it as I can’t help doing J), and we had great views of both White-tailed and Swainson’s Hawks soaring overhead (unfortunately the only Harris’ we saw was making a beeline over the brush).  The Cactus Wrens were uncooperative, but what was even better was a singing Black-throated Sparrow on north Brushline that came right in and sat on the wire fence next to us!  I didn’t hear any Botteri’s Sparrows (this is the only spot in Hidalgo County you can get them), but at one spot along this road we got out to try and spot one of the Green Jays that was making a racket when we suddenly saw why they were making a racket – they had a Great Horned Owl!  He gave us great looks before he decided he had had enough and took off… 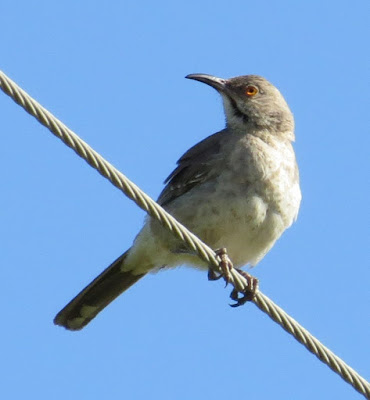 
The pond at the north end of Brushline was absolutely dead (except, again, for a couple of Killdeer) but as we poked ahead to the turnaround point, I heard a Bullock’s Oriole!  So we piled out to try and pish it out, and instead in roared this gorgeous Hooded Oriole!  The Bullock’s never came in, but thankfully we would see another one on the way out.  We had both Black and Turkey Vultures as well, and plenty of Common Ground Doves along the road.  But what really surprised me (and unfortunately took off before I could get a shot) was a Pheucticus-type grosbeak that landed on the wire fence (in awful light of course) that had a darkish head and rusty-ish breast with fine streaks, but that’s all I could make out before it fled.  My gut reaction was Black-headed, but neither are supposed to be here this time of year; it appeared hooded, and the rusty coloration would better fit Black-headed, but it was so backlit that I couldn’t rule out a first-year male Rose-breasted, either, so that was the one that got away… 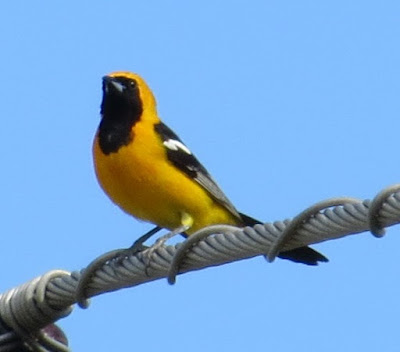 
The most exciting thing along Ken Baker Road was a male Ladder-backed Woodpecker that came right in to a dead tree and gave Per some great photo ops!  We also picked up some Lark Sparrows and had a nice Pyrrhuloxia on the way out.  Since it was getting close to noon, I suggested we take a peek at the ponds at CR20, which had been hosting some oversummering ducks that might be good for his list, so over we went.  We enjoyed tons of Black-bellied Whistling Ducks (and a few Fulvous) and Black-necked Stilts (and a single Avocet), along with some Ruddy and Mottled Ducks and a White-faced Ibis, plus a couple of Gull-billed Terns and some Laughing Gulls.  And we managed to pick up the delinquent Gadwall, Shoveler, and Redhead pair while we were at it, along with a Long-billed Curlew and an unseen chirping Horned Lark.


We were “all done in” by then, but Per was very happy with his list, and including the Lesser Nighthawk that was whinnying at the apartments before we left (and the Lesser Goldfinch I heard before entering my apartment at the end), the species total was 71 species for the morning!  Bird List: