The next day we met at Frontera Audubon Thicket; this was one of the places I was getting near constant reports from on the Rare Bird Text Messaging group, so I was hoping some of those migrants would hang around!  It was a beautiful sunny day, and I actually beat Mary there by about 15 minutes, so I logged several things from the parking lot, including Green Parakeets and a female Summer Tanager. 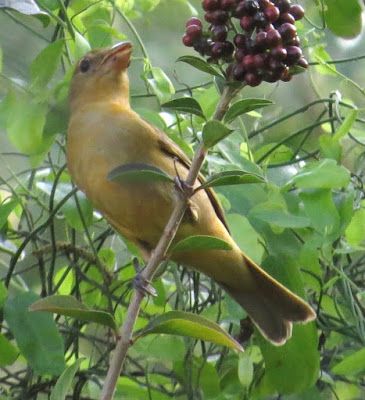 Once checked in we crept along, picking up a Redstart here and a Tennessee there; we sat for five at the little resaca and had a handsome Yellow-crowned Night Heron pose for us!  A Green Kingfisher gave a very brief view, but in the area we found more Philadelphia Vireos and a Blackburnian Warbler!  While sitting on another bench Mary saw a largish bird with a banded tail fly in, then spotted a good-sized nest; I got a glimpse of a pale bird, but putting two and two together it was undoubtedly the resident Gray Hawk! 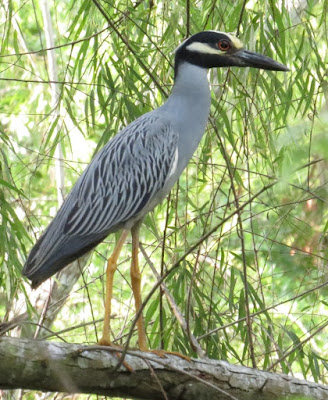 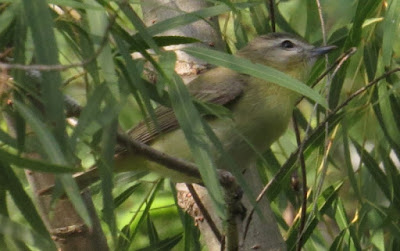 The big lake was rather empty, and as we made the big loop around the property there was no shortage of White-tipped Doves; in fact, Mary made the comment as we were passing through the dark and dingy Sabal Palm Grove that one could be creeped out rather easily if you didn’t know what was making that spooky cooing sound! J  But the most action turned out to be around the feeder areas:  we had a female Bay-breasted Warbler, more Nashvilles and Black-and-whites, and what I felt was the bird of the day – a singing Bell’s Vireo!  He wouldn’t let himself be seen, however, except for the briefest of moments…  The feeders themselves were crawling with Chachalacas and doves, and several Rose-breasted Grosbeaks came in as well.  Further down the trail a Blue-headed Vireo was singing, and he finally did allow us a look!  I showed her the area where the Blue Bunting had been hanging out, but all we could kick up was a Catbird and a lovely Chestnut-sided Warbler along the “dead end trail”.  Somewhere in here we happened upon a Black-throated Green Warbler who had caught himself a huge caterpillar and was trying to figure out how to best devour it; it got kinda gooey after awhile!  Near the blind we heard a Yellow-breasted Chat making some interesting noises, then took the boardwalk back, where we spooked a Green Heron, had a couple of White Ibis and a Great Egret feeding, and heard a Groove-billed Ani call.  Almost back at the gate we had a family of Black-crested Titmice making a ruckus while a female Chestnut-sided Warbler ignored them while she foraged… 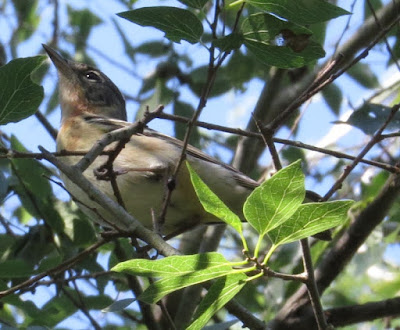 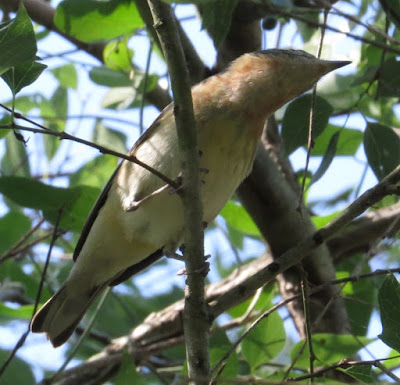 Belly shot (this is often the only look you get at a warbler, so it pays to learn the key field marks from this angle...) 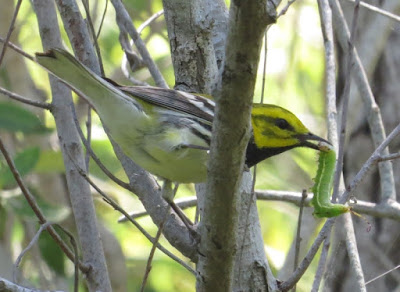 We had to part company by noon, but it was another terrific day of spring migration, with 62 species for the morning!  Bird List:

Posted by Alamo Inn BB Gear and Tours at 7:47 AM