The plan was to check out Orphanage Ponds (as I had never been there before, but they had hosted nesting Masked Ducks in the past and I figured it would be a good spot to start surveying), Monte Meta Cemetery, and Adolph Thomae County Park.  Due to a miscalculation on my part I got to Orphanage Road well before sunrise, but couldn’t for the life of me figure out where the ponds were (unless they were down that horrendous dirt road that I wasn’t gonna touch)!  But I know I had seen them from the freeway, so the next plot was to head north on the frontage road and turn south at the first opportunity and see if I could see anything.  But what I saw was a tremendous thunderstorm coming my way from the west, so the storm-chasing part of me went into gear and pulled over to take video and watch the storm!

When it started spitting, I continued north and got to the “causeway” in Sebastian right about the time the skies opened up, so I found my turnaround and decided to wait out the storm in the sheltered area.  Sounded like a good idea until I started pondering maybe why they made this section of the freeway a “causeway” – could it be prone to flash floods??  Suddenly I didn’t feel so comfortable under there, and to top it off, the low tire indicator suddenly popped on!  Thankfully I had one of those little plug-in generators that pumps air, but no way was I gonna attempt that with lightning shooting off left and right and forward and back!

When it finally let up I risked getting zapped and got the tire up to a reasonable level, then limped back to Harlingen to the Sears auto shop (what did we ever do before IPhones that can tell us where the nearest tire shop is?? J), where I ended up having to replace the tire, but at least the morning was still young and the storm had passed to the south, so I gave up on trying to find the ponds and just headed on to Monte Meta Cemetery, which is northeast of San Benito.  Looking south on the freeway you could see the storm I had just sat through, and the updraft was being fed by a tremendous tail cloud coming in from the west; it was wicked!  But I got off on Sam Houston well north of the storm and headed northeast through the cute little town of San Benito towards the cemetery.  This spot is best in migration with its forest of ebony trees, but the purpose of a survey is to see what’s there all times of year, and the rains had certainly energized the birds!  The place was a cacophony of mockingbirds, White-winged Doves, and Golden-fronted Woodpeckers, and even Chachalacas!  There’s a nice area of thornscrub habitat that under drier conditions you can actually drive into, but I didn’t dare attempt it today, although I did hear a White-tipped Dove moaning from the area.

View of the storm heading south on US 77 (that's the updraft, not a rain shaft; you can just make out the feeder cloud on the bottom right) 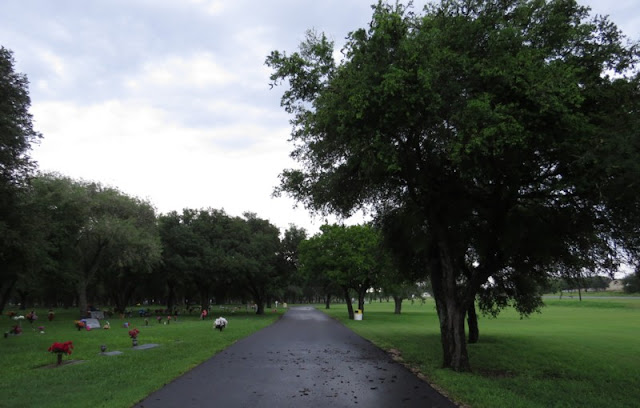 Sam Houston takes you right into Rio Hondo, and from there you can take FM 2925 north and east into Arroyo City.  It also takes you right by the Arroyo Colorado Unit of the Las Palomas WMA, and while it’s closed to the public, you can still bird the little entrance road and get some nice things right by the parking lot, so I decided to swing in and jump out to photograph yet another big storm coming east!  It was fun taking video and having the likes of Common Nighthawk, Lark Sparrow, Eastern Meadowlark, and Bobwhite singing next to the rolling thunder while a Swainson’s Hawk sat unconcernedly on a pole!  In the parking lot I watched a Turkey making tracks down the main trail and towards the woods as the storm made its way relentlessly in my direction, all the while adding goodies like Yellow-billed Cuckoo, Common Ground Dove, Painted Bunting, and a family of Groove-billed Anis!  A Long-billed Thrasher sang out in the open on a wire with a Verdin as company (it always amazes me that I knock myself silly to get a Verdin to come out for a client – and they rarely do – and invariably the silly thing will sit right out in the open when I’m by myself…)! 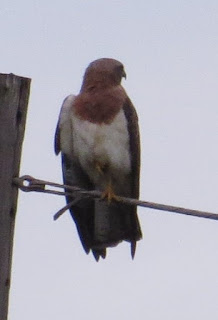 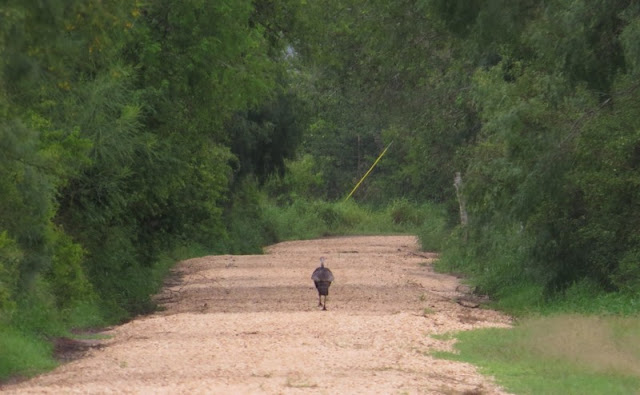 Turkey fleeing down the trail

Was time to skedaddle and try to stay ahead of this thing, so I blasted up and over to Arroyo City, where it looked like the leading edge of the storm was south of me (and the poor folks doing the run at South Padre were getting clobbered, I found out later); the structure was just tremendous, and it looked as though the whole front end could have been rotating, as it had that classic “barber pole” striated look!  The spot where I stopped to shoot the storm happened to have a nice little wetland with a Great and Snowy Egret, some Black-necked Stilts, and another group of Turkeys!  I happened to notice an oncoming car slowing and expected him to stop and ask what I was doing, but then saw that he was slowing for yet another group of Turkeys in the road!  Arroyo City is traditionally a good spot to find them, although never guaranteed by any means. 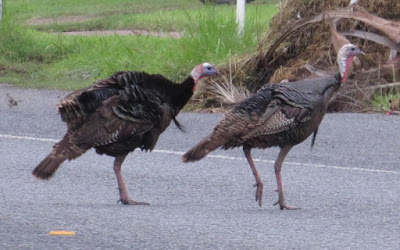 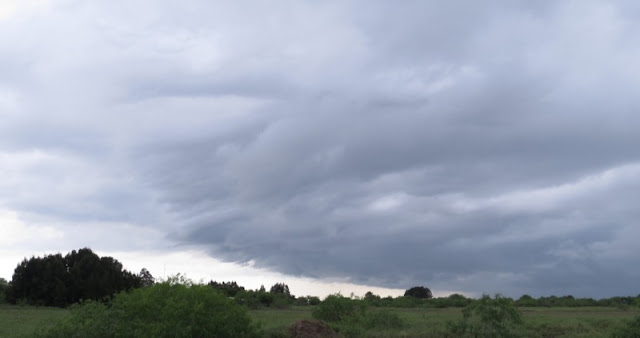 Another view of the storm, showing striations on the left side


Continued on to Adolph Thomae County Park, which has a steep entrance fee but is a delightful little place to bird!  I was surprised at the number of campers there on this lousy weekend, but was even more surprised that, with thunder and lightning clapping all around, people were still out in their boats and fishing on the shoreline!  By the time I got down to the end of the road (I usually go there first and work my way back, as all the pullouts are on the westbound side), the skies once again opened up, and a few brave souls were scurrying to get their boats out of the water!  It was quite the madhouse for awhile, but I found a place to park and wait it out, after which the weekend warriors got their boats back in the water (even though it was still spitting lightning) and the birds started to get energized again!  A pair of Scissor-tailed Flycatchers were going after what I thought was a grackle at first, but turned out to be an ani!  (Not sure if anis actually go after nestlings, or if it was simply a case of mistaken identity…)  Nighthawks were out the yin yang, and I was pleased to hear a Cactus Wren singing across the river.  A couple of “House Sparrows” foraging next to the dumpster turned out to be Olive Sparrows, and a Curve-billed Thrasher gave a nice look.


That took me right up to noon, so headed home after that with 53 species; not a whole lot, but not bad considering the weather!  Bird list: