Today was the hunt for the Aplomado Falcon, and I was praying that the old adage, “Third time’s a charm,” would hold true today, as my last two forays with visiting birders came up empty!  Since Chad also wanted Snowy Plover, I opted to try Boca Chica first, so we headed straight there on this beautifully sunny but chilly (37 degrees) morning, with the traditional coffee pit stop at the Brownsville Dump Stripes!


Turning on to Boca Chica Boulevard, we didn’t even make it to the checkpoint before a suspicious-looking hawk stopped us, which was hidden in brush and right in the sun, of course!  We parked and got out to get a better look, and the culprit lifted off and came around in perfect light – a knock-down gorgeous White-tailed Hawk!  What a way to get a life bird!  A little ways past the checkpoint there’s a dirt road on the right where you can pull off the road (and there aren’t many places to pull off the road safely here) where some scanning revealed nothing but thousands of gulls and a few caracaras at the landfill, but a suspicious pink! got me over to some bushes, and what I thought might have been a White-throated Sparrow actually turned out to be a Northern Waterthrush!  Unfortunately Chad missed it, but thankfully it wasn’t a life bird, as it just refused to come back up (several Yellowthroats were only too obliging, however)! 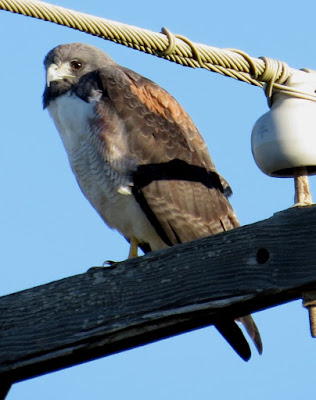 White-tailed Hawk﻿
One last scan and I suddenly spotted a falcon shooting eastbound!  Thankfully it landed on the hacking station, and right away I realized why I had probably missed falcons here before:  the spot where you park is in a direct line with a stunted bush that totally blocks the hacking station!  But even though far away and with his back to us (actually, Marge found a second bird, clearing up the “He’s on the left!”  “No, he’s on the right!” argument J), with the zoom on the scope we were able to see his white supercilium and rusty “pants”!  Boy, was Chad a happy camper after that one (and I was a relieved camper J)!


On we went to the mudflats, where we did have several shorebirds:  the first big flock was almost entirely made up of Black-bellied Plovers, but we also found several Least and Western Sandpipers, the latter which was another lifer for Chad!  We also found Willets and a Sanderling, and Chad spotted a nice buffy Long-billed Curlew, but during one scan I did hear a Snowy Plover, so I pulled out the scope and started looking – no banana.  We scoured every flat we could find after that, and still no Snowy; I was very bummed!  (Chad was gratified with his life Gull-billed Tern that batted by… J)  But heading down to the beach to turn around, Marge was thrilled to see the wild waves of the Gulf and test the waters – I was surprised that we were the only ones down there (besides a couple of Ring-billed Gulls)! 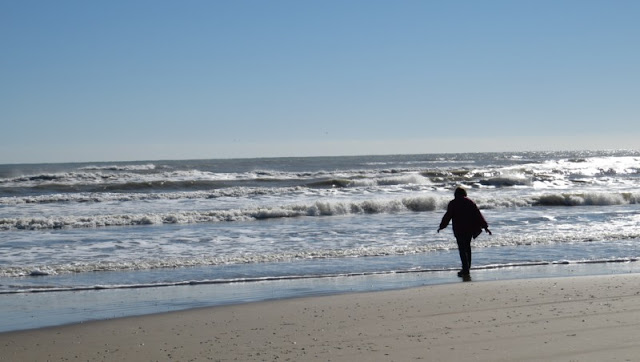 "Marge" on Boca Chica Beach
From there we had to decide whether to try for more plovers at South Padre, or try for Cassin’s Sparrow along Old Port Isabel Road (OPIR), so seeing as time was getting short we opted for OPIR, picking up a Red-shouldered Hawk along the road on the way.  The canal not far past the railroad tracks had several Neotropic Cormorants, a Snowy Egret, a Pied-billed Grebe, and several Coots.  The previously impassable spot at the mile point was now dry, but the road was still horribly rutted, so we poked along, enjoying the Savannah Sparrows and Yellow-rumped Warblers that popped up, but no Cassin’s.  An incongruous pair of Vermilion Flycatchers was on the highest of the high wires, and Chad spotted a flock of White Pelicans soaring ahead of us.  Several Harriers rocked over the fields, but additional Aplomados proved evasive.  We got as far as a point where they basically had re-built an alternate road around the mud, but after that it truly was impassable with mud and deep ruts, so we turned around and called it a day after that, but not before spotting a huge Indigo Snake that was trying to warm up by the side of the road! 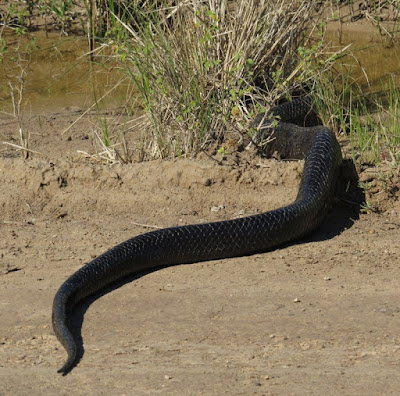 This Indigo Snake was passively sunning along the road!﻿ 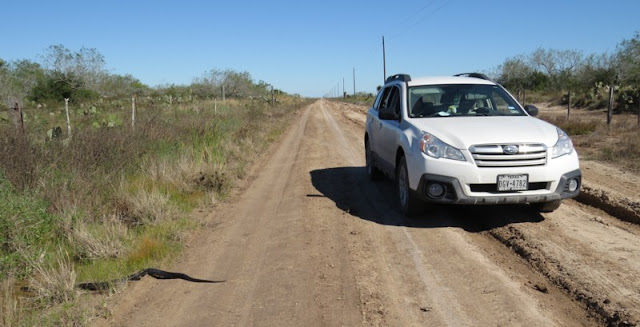 With "Diggory the Subaru"