After analyzing the weather report and what birds were left on their “need list” (taking into consideration what was reasonable as well), we decided to head up to the La Sal del Rey area for Joe and Mary’s last day.  Again, it started off foggy, and as we wheeled onto Nittler Road from FM 493, the Avocets feeding in the little wetland were ghostly!  Continuing north, we headed west on FM 490 to Brushline Road, where we crawled northward, stopping for suspicious chirps and scouring any wetlands we encountered.  The sun actually came out while we were on this road, and even a local landowner stopped by to see what we were up to! J  (At that particular spot we were enjoying a pair of distant Red-tailed Hawks…)  The wetlands held the usual ducks and waders, but one of them had some coveted American Wigeon feeding in the field!  Both Harris’ Hawks and Crested Caracaras gave great photo ops, and even a couple of Kestrels uncharacteristically stuck around!  I was surprised we had no Horned Larks in the plowed fields (except a brief flyover), but Joe and Mary got great looks at Lark, Savannah, and Vesper Sparrows at various stops!  The little reedy wetland that had a Swamp Sparrow when I brought Brad this way last year still had the (uncooperative) Swamp Sparrow, and the “Purple Gallinule Wetland” had an Eared Grebe (along with a bunch of other waterfowl)!  A Peregrine flew over at one stop, and at the intersection with SR 186 a beautiful flock of Sandhill Cranes showed off for us! 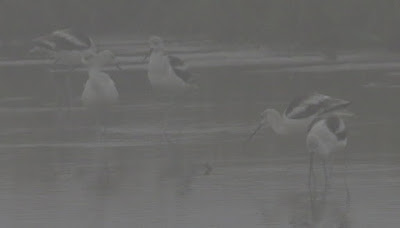 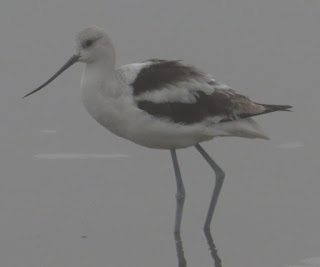 American Avocets in the fog 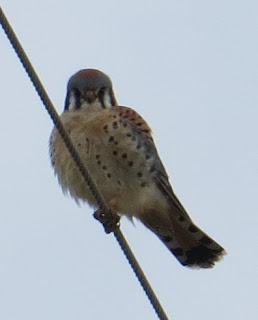 Kestrel checks us out 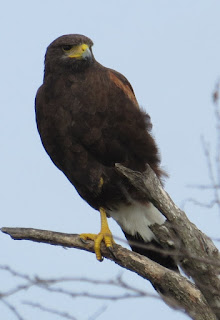 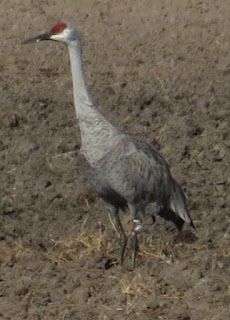 Crossing over, Joe noticed a “clump” by the side of the road about a half mile up, and they couldn’t believe it – it was another Roadrunner!  This one transformed himself into a typical Roadrunner shape as we approached, and Joe was able to get some more pictures!  Two more White-eyed Vireos sang right by the road but would not come out, no matter how much we coaxed them! A little further, another “most wanted” bird, a White-tailed Hawk (albeit a youngster) was circling with a few Turkey Vultures, and at that boggy area that had the road closed for awhile, a nice Vermilion Flycatcher flopped around!  At the intersection with Chapa Road we stopped to see if we could pish out any Cactus Wrens, but as Providence would have it, four potentials lifers all decided to show up at that point:  the White-eyed Vireo finally came out into the open, as did a Verdin (!!!), and behind us both the Cactus and Bewick’s Wrens enticingly called, but we couldn’t get the latter two to show themselves… 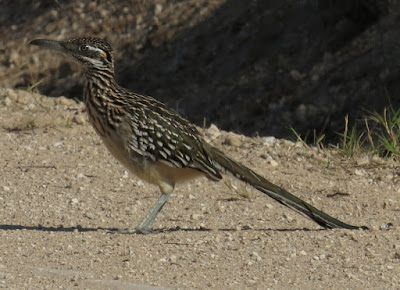 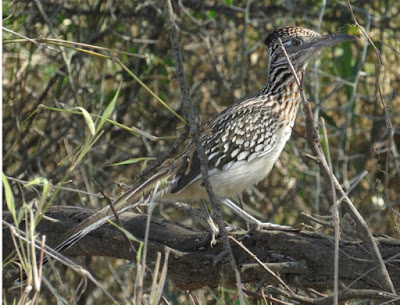 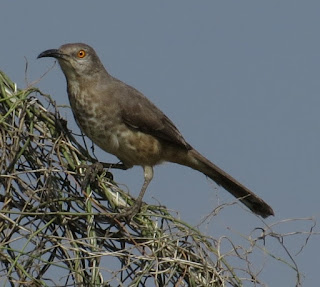 Curve-billed Thrasher
Continuing on Brushline we were thrilled to have an adult White-tailed Hawk hanging in the wind while a Caracara tried to chase him, doing loop-de-loops in the process!  Yet another Roadrunner posed, and somewhere along the route my own personal wish came true, and a Say’s Phoebe (rather rare in the Valley but reported in the area recently) posed on the wire!  At the farm pond near the end of the road we had Roseate Spoonbills and another pair of Wigeon in addition to the regulars.  I headed down to the gate to turn around and hit gold:  in amongst a flock of Savannah Sparrows that popped up on the fence were two beautiful Grasshopper Sparrows!  High fives! 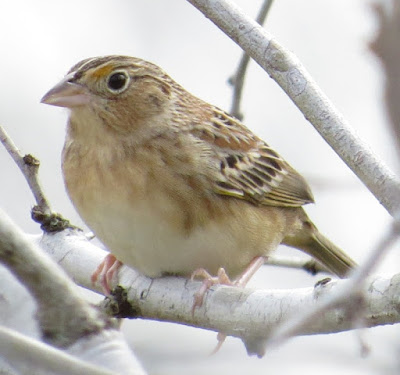 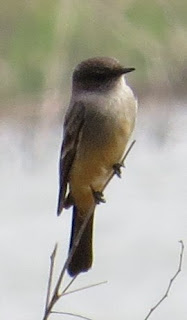 Say's Phoebe, normally pretty scarce in the Valley, but this seems to be a boon winter for them!


We scooted down to Ken Baker (aka GI Road to us old timers J) and continued our crawling, and as we approached Rio Beef Feedyard there wasn’t a blackbird in sight.  I had heard from others that if you ask at the office, they may give you permission to bird the feedlots, so we headed in (picking up yet another Say’s Phoebe in the field), got the coveted permission (just stay in the car, they said), and had crippling views of the needed Brewer’s Blackbirds, along with every redwing, cowbird, and grackle in the area J, but try as we might, we couldn’t pick out a Yellow-headed.  (Joe and Mary got a kick out of the icterids sharing the feeding troughs with the cattle… J)  A flock of Snow Geese fed in a protected area behind the lots, and while they were too far away to pick out any Ross’, a couple of blue morphs were easy to pick out.  Joe was able to pick out a couple of Western Sandpipers next to some Leasts in a nearby wet spot, and a big flock of Black-bellied Whistling Ducks wheeling into the feeding area was fun! 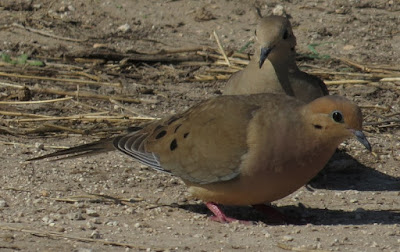 
Continuing on, I hit the brakes for an odd-looking sparrow, and after pishing, a beautiful Black-throated Sparrow popped up!  Mary got a great look, but unfortunately Joe didn’t get on it until it flew… L  I was very bummed, but Joe seemed to take it all in stride…  But unbelievably after that we kicked up yet another Say’s Phoebe!  I couldn’t believe it! 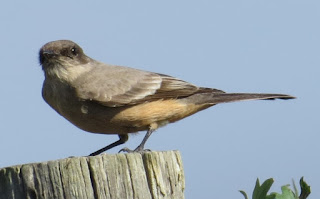 Yet another Say's Phoebe ready to book...
Didn’t pick up much else, so headed on down to Delta Lake to check for shorebirds.  Unfortunately I didn’t realize that the angle of the sun would be horrible, but we were able to at least add their Long-billed Dowitchers, plus Laughing Gull and Caspian Tern to the day list.  A swing around the park proper bagged a nice male Belted Kingfisher and a pretty pair of Redheads (ducks, not people J), but not the hoped-for Green Heron. 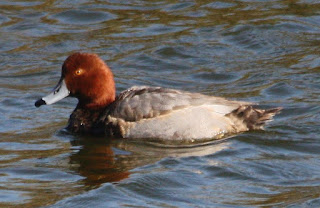 Redhead
Called it a day after that, with 96 species logged, and I believe Joe and Mary had well over 30 lifers!  Bird List: