First Day of the Birding Blitz for Some Brits


“Joe and Mary” (names changed to protect identity) from Birmingham, UK, were waiting for me right outside the “Red Door” on this first day of their Valley Birding Blitz!  Most everything was new, but while visiting their son in Houston they had spent some considerable time birding that area before coming here (and then spent another four hours scouring Santa Ana after arriving here), so a good chunk of what was on their “need list” was already taken care of, and them some!  So since the Crimson-collared Grosbeak (and some other rarities at other Hidalgo County locales) was still being seen, I figured we could hit those hotspots and bag some common Valley specialties along the way.


After cruising the Weslaco neighborhoods pre-dawn in hopes of finding some parrots, we headed over to Frontera Audubon Thicket, where the gates were open early, and almost immediately after we pulled in, Chris Benesh from Field Guides wheeled in with a van full of folks!  Our two groups circled the orchard (as that’s where the bird had been hanging of late), and in the meantime Joe was able to photograph their first Clay-colored Thrush that miraculously perched out in the open!  Red-crowned Parrots were flying over, but just not in an open patch; Mary got to see one, but Joe dipped.  Chris and I exchanged phone numbers and my group went into the thicket to seek additional birds; we carefully checked the resaca for Green Kingfisher while a Green Heron called unseen from the big lake.  Sneaking around the loop I was pleasantly shocked to hear a flock of Wood Ducks (rare in the Valley) take off unseen from a hidden bog, but as we approached the boardwalk, a whole lineup of Black-bellied Whistling Ducks decorated the railing!  As we were enjoying them, a Green Kingfisher flew by and landed on the very end of the boardwalk, but Joe’s camera was able to pick it up nicely!  A Long-billed Thrasher showed close by while one of Joe’s nemesis birds, a White-eyed Vireo, sang across the lake but refused to come out…  It was about that time that Chris texted me and said the bird was seen by another couple and heard by him, so we raced back, only the bird was gone. L  Chris had gotten a fabulous recording of the thing, but alas, she didn’t vocalize for us, so we decided to head on to the next spot. 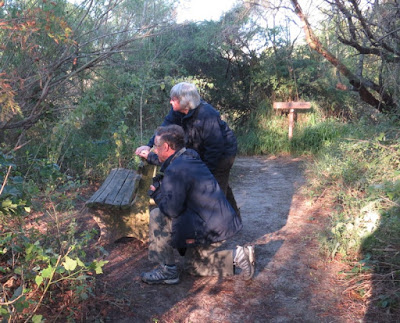 Checking the Resaca for Green Kingfisher 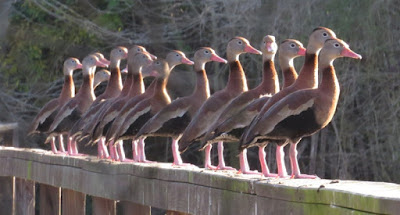 Lineup of Black-bellied Whistling Ducks
And the next spot was Estero Llano Grande, which is a photographer’s paradise!  On the way in a flock of Greater White-fronted Geese flew over with three smaller white geese that I felt comfortable calling Ross’, as Snows are virtually the same size as the Whitefronts.  Right away we got their life Buff-bellied Hummingbird, and while we watched a couple of different Archilochus hummers came in that I felt comfortable IDing as Ruby-throated and Black-chinned, based on bill length and the shape of the outer primary (there was a young male Blackchin hanging around starting to show the purple, but we didn’t see him).  Park Host Huck was manning his post and pointed out a Bronzed Cowbird in a flock of Redwings to us, and we enjoyed the normal contingent of ducks and grebes (a nice Least was very cooperative) before moving on.  None of the three Virginia Rails showed themselves, but a Sora showed off, and when something with a long bill shot behind a clump of reeds, a scope look revealed to just be a Snipe (which is really nothing to sniff at, either).

Waterfowl crowd - can you spot the Cinnamon Teal? 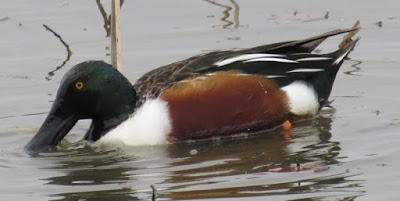 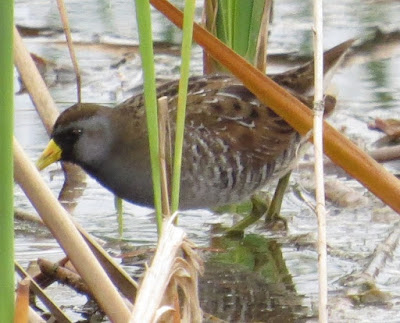 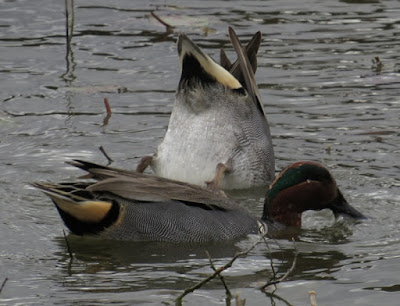 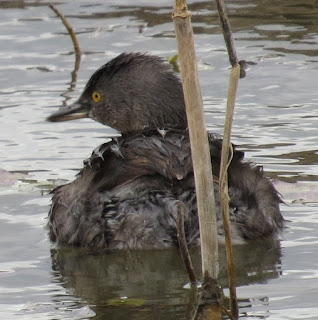 Least Grebe
Sparrows were scarce, as were shorebirds, but at least a Tropical Kingbird vocalized and showed well at Grebe Marsh.  On the way to Alligator Lake both night herons were showing, and one of the resident Pauraques came through famously; Mary was convinced he wasn’t a cardboard cutout only because he moved! J  The Screech Owl was also at his post (a potential split according to some folks), and Joe was very pleased with the photo!  A Cardinal was giving the owl fits, however…  At the overlook at Alligator Lake, Joe found a comrade with a “Big Gun”, so they talked cameras awhile as a pair of Anhingas posed, and a big Alligator lay serenely on the other side.  Another Green Kingfisher came racing in but didn’t stay long enough for a picture.  A short loop around Camino de Aves didn’t produce the hoped for Ground Doves, but a hovering White-tailed Kite was a nice consolation prize!  A parting rest at the VC feeders added the wintering Bullock’s Oriole and some feisty Chachalacas, and a visit to the Tropical Zone yielded great looks at White-tipped Doves, Orange-crowned Warblers, and a nice male Nashville Warbler that came in for a bath and showed off his rusty cap!  Joe was able to photograph the Ruby-crowned Kinglet as he revealed his crown as well!  The weather was lousy for butterflies, but we tried anyway, and managed to find a Sickle-winged Skipper and a very worn Silver-banded Hairstreak! 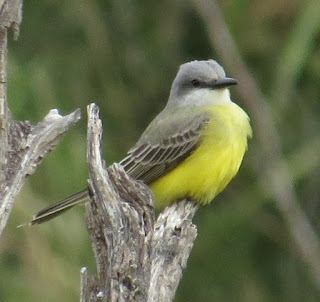 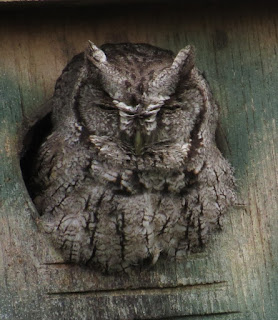 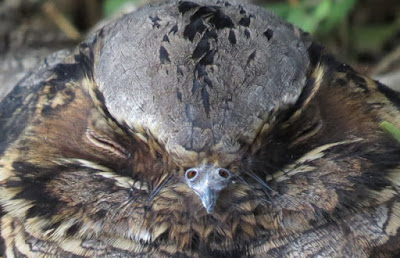 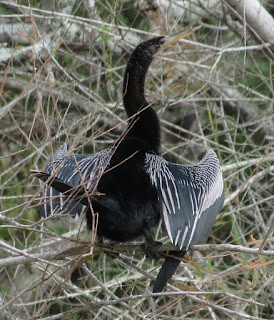 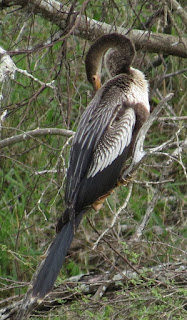 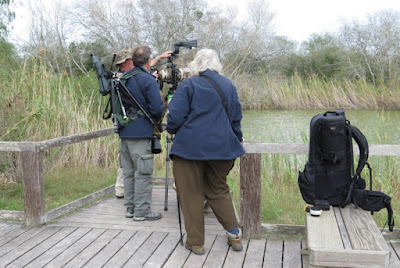 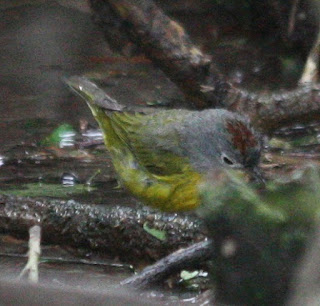 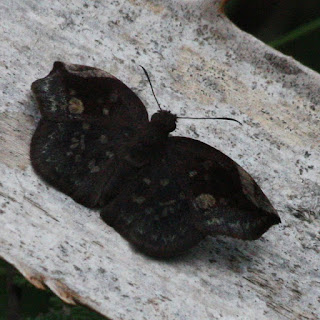 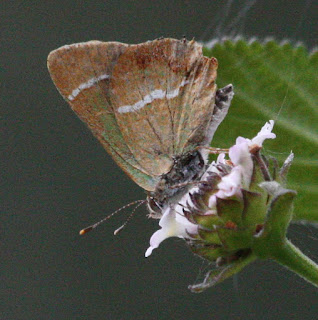 Worn Silver-banded Hairstreak
On the way to Anzalduas we stopped at the famous rock pile (after stopping at a Stripes and introducing my guests to Barbacoa Tacos J), and I was starting to sweat as we couldn’t spot any Burrowing Owls at first!  Finally I spotted one, and Joe announced that he saw it, only he had spotted a different owl!  Before long it became apparent that Mary as well had her own owl, so that was three that were hanging out there (and Mary’s had a rather rusty tone)! 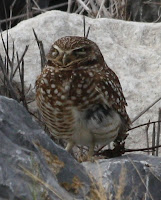 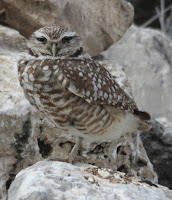 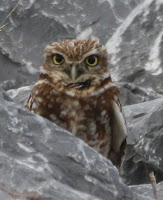 Three different Burrowing Owls near Anzalduas
Having gotten our exercise for the day hiking all over Estero, I promised them that Anzalduas would be a driving route.  Well.  After pulling in and parking at the Big Field, I talked Joe at least into taking a hike to try and flush a Sprague’s Pipit (Americans were all over, as were Western Meadowlarks)!  He was dubious at first as he had visions of past “Pipit Death Marches”, but as we started out with the sun to our backs, it didn’t take long for a couple to pop up, giving their characteristic pike! calls, and we eventually got smashing looks and (more importantly for Joe) a smashing photograph!  High fives all around!


From there we continued the promised “driving route,” but as a Black Phoebe posed in horrible light, we decided to pull into the crossover and park, then walk behind the maintenance area to get a better view while a single House Finch flew over.  The phoebe never showed again, but a Northern Beardless Tyrannulet called, so that took us clear to the other end of the section, where the Greater Pewee made an appearance!  The tyrannulet called again, which took us back to the road, where a flock of Eastern Bluebirds were showing off, and a couple of Lark Sparrows gave Joe fits by refusing to move so he could see where they were! J  Huck pulled up about then, bagged the pewee for the year, then came over to see what we were looking at; by that time Joe had found the unmoving sparrow, but then we went through the same exercise with Huck!  I guess by that time none of us had the wherewithal to think about going back to the car for the scope… J  We let the tyrannulet lead us by the nose over the whole southeast quarter of the park (where a Pine Warbler made a nice appearance) before finally giving up, making one last loop around, and calling it a day!  I was pleasantly surprised to see that we had logged over 100 species for the day!