Big Crowd for a Little Bird


“Stanley” was a big state-lister from Indiana, as well as being a hard-core ABA lister, so there were only a handful of things that he needed.  After consulting his target list and considering the reasonable possibilities, we decided that a trip out to Salineño would be the most profitable, followed by a Wild Plover Hunt up “Sparrow Road” to look for some reported Mountain Plovers.


Stanley and his wife “Candy” drove a Prius, so with the great gas mileage those cars get they opted to drive.  Driving through Rio Grande City a flock of his first target bird, the Green Parakeet, thankfully decided to do a flyover (the lighting wasn’t the best, but it was a good enough look to count J)!  When we arrived at Salineño, the place was packed: Merle’s “parking lot” was full already, and there were two vans down at the boat ramp, indicating a probable tour was also there!  The more eyes, the better, we agreed, and headed out on the “Seedeater Trail.”  We met a couple of folks who said they had just seen it, so we joined the rest who hadn’t been as fortunate as they remained at their vigil, hoping the little guy would return.  I knew the bird had been seen all along that trail, so I left Stanley and Candy with the group (I figured 20 pairs of eyes would be better than my one pair, just in case) and ventured on.  I hadn’t gone far before I heard a booming British voice, and I hurried back to find that Stanley had gotten a brief glimpse, but most of the group hadn’t, so we took up our vigils again.  Stanley and Connie and I moved down to a little spot that was next to the cane, as did the British guy, and in mid-yap I happened to see a little guy bop up right in front of us, and it was the seedeater!!  Our little patch filled up quickly J, but thankfully the bird performed beautifully in wonderful light, so everyone got a great look, including the leader of the tour group! J 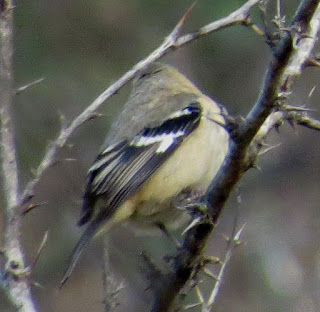 Shy White-collared Seedeater, a bird found only along the Rio Grande in the US 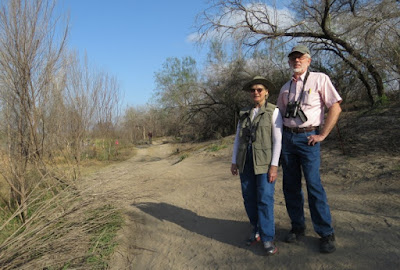 "We got it!"  (And hidden in the brush are other folks still looking...)


Mission accomplished there, the next objective was the Audubon’s Oriole, and what an audience at the feeders!  J  We made the decision to stay as long as it took for the oriole to come in, but in the meantime we had great fun with the usual Altamira Orioles (especially when one was sharing a feeder with the wintering Hooded, giving great size comparisons), Green Jays, Kiskadees, and a special appearance from a Roadrunner coming in for corn!  But the “feeder rarity” of the morning turned out to be a female Black-headed Grosbeak that came in a couple of times!  Finally the Audubon’s came in for repeated great views, and then it was off for a river watch. 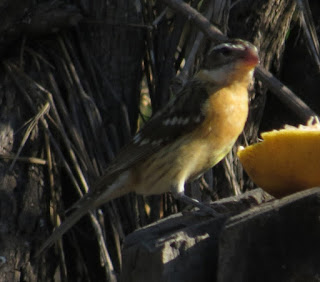 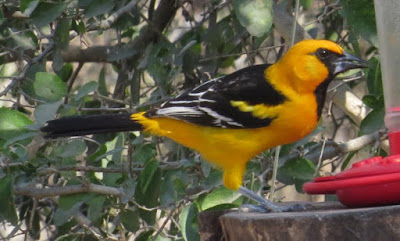 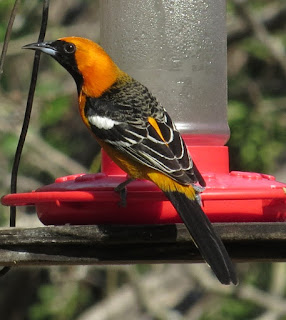 Here are the two together - note the size difference! 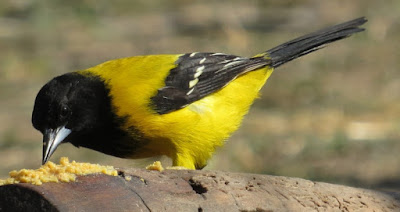 Audubon's Oriole is always the star! 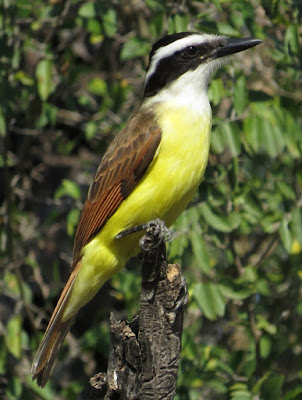 Even the ubiquitous Kiskadees are good for a portrait! 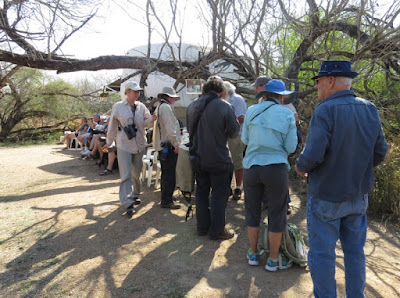 Full house at the Salineno Show!
I had warned Stanley that Muscovy and Red-billed Pigeon were highly unlikely, but we nevertheless had our snacks and enjoyed spotting Ringed Kingfishers, the resident Ospreys, and a Gray Hawk.  A lady from Corpus told us that they had just seen Black-tailed Gnatcatchers on the Seedeater Trail, so we decided to go look for them, but got only Blue-grays and a nice variety of sparrows. 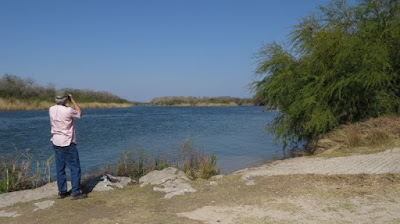 Watching the river for pigeons...
﻿ 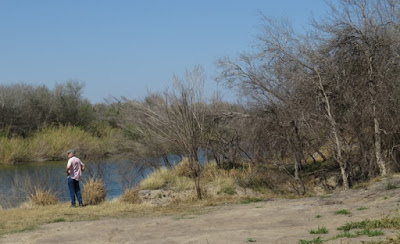 ...and searching the trail for gnatcatchers!
After that it was time to go look for the plovers, so since Stanley was a “country guy” (they owned an apple orchard back home), we took the back way up to FM 490 and over towards McCook.  I mentioned that this route, though barren as can be in places, can have some wonderful birds (Prairie Falcon and Ferruginous Hawk in past years, in addition to the plovers), but by this time it was just too hot and windy; we scoured every field we could and could come up with nothing but Horned Larks and Western Meadowlarks (although we did spook up a Common Ground Dove near a building, and saw a distant White-tailed Hawk).  One interesting sighting was a helicopter stringing high-tension wires like a threat through a needle! 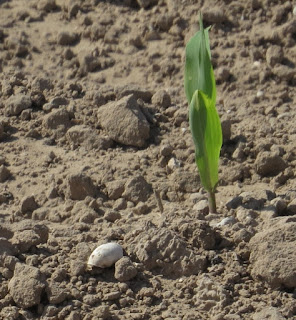 One oddity was dozens of these white shells scattered all over the plowed fields! 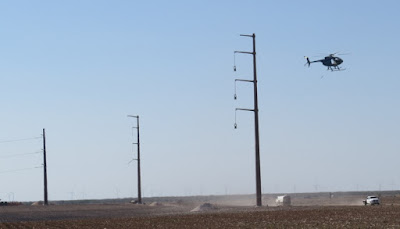 When you can't watch birds, you watch the utility guys string wires...
The species list was low (55), but the quality couldn’t be beat!  Bird List: