They Brought It With Them!

Even though visiting birders Daryl and Jeanette were undoubtedly used to cold and gloomy weather living in San Francisco, I'm sure they were hoping for warmer, sunnier days!  Nevertheless, we headed out into said cold and gloom; I had long ago suggested the La Sal del Rey Route for raptors, and considering the weather it was a perfect day for it!  Just before reaching Hargill we found their first lifer: a beautiful Harris’ Hawk on a pole (followed by another, and another…J)!


Getting onto south Brushline, things were seeping right away, so we got out for a minute, and right away had a Pyrrhuloxia pop up!  An Olive Sparrow gave us a quick peek, and Green Jays piled in to pishing, but we had to work hard for most of the little birds:  intermittent feeding flocks included kinglets, gnatcatchers, House Wrens, and Orange-crowned Warblers for the most part.  We had our first Sandhill Cranes fly across the road, and there was actually water in some of the wetlands where we enjoyed four Snow Geese, Mottled Ducks, Green-winged Teal, Greater Yellowlegs, and a single Avocet!  A few Common Ground Doves shot across the road (along with plenty more Mourning Doves), and Lark Sparrows lined the power lines.  Closer to SR 186 a small flock of Savannah Sparrows sat up for us, and lots of Western Meadowlarks crossed the road and landed in the fields next to us.  Daryl and Janette had already seen Caracaras on the way down from Corpus Christi, but they never got tired of seeing these beauties again as they sat with the Harriers on the posts! 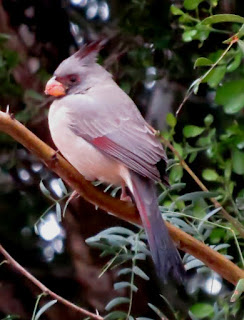 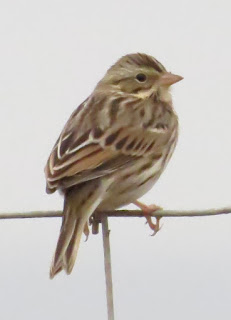 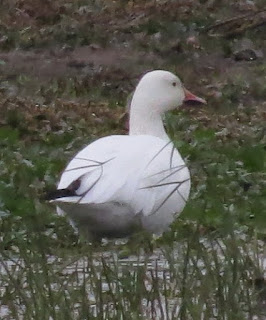 
After crossing over SR 186 we crawled along and heard some Green Jays fussing at something, then heard a Red-shouldered Hawk start to yell, which solved the mystery…  The recent rains had produced many bogs, and in one of these bogs we had several Eastern Phoebes, Lincoln’s Sparrows, and other stubborn dickey birds, including no less than three witting Least Flycatchers!  Everyone opted out of hiking down to the actual Salt Lake due to the cold, but we did find the road-killed Racoon that Colin and Pauline (two of our British guests who are long time photographers) had mentioned to me the day before:  they described several vultures and caracaras descending upon it until a Coyote came up and literally dragged it over to the side of the road!  So you can imagine our incredulity when it looked like the thing had been dragged back into the middle of the road (with said vultures and caracaras)!


Again we ran into feeding flocks here and there:  one flock had a pretty female Black-throated Green Warbler, and another had several Nashvilles in the mix!  The White-eyed Vireos were stubborn, but at one spot a brown tanager-sized bird bolted into the bush, and what I saw of it had nice chestnut-colored wingbars and a big bill – a Blue Grosbeak!  (Pretty late, but several had been reported lately…)  We also had an Indigo Bunting that was anything but indigo, but that didn’t stop it from being one of Janette’s favorite birds of the day!  We also had a Bewick’s Wren briefly show, but the Cactus Wren was content to just scold at us…


Continuing on a lovely White-tailed Hawk posed, and we soon came upon a small flock of Scissor-tailed Flycatchers, which in the overcast light were absolutely stunning (definitely Daryl’s favorite bird)!  Another car full of birders came towards us from the north, and just as we were about to pass each other, two Groove-billed Anis popped up on the fence!  They were definitely late! 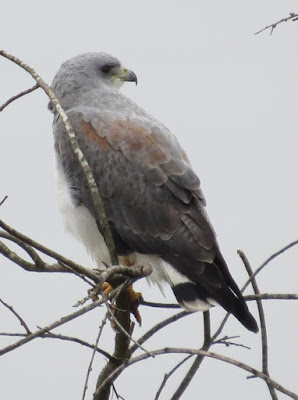 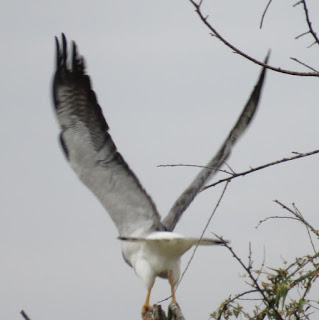 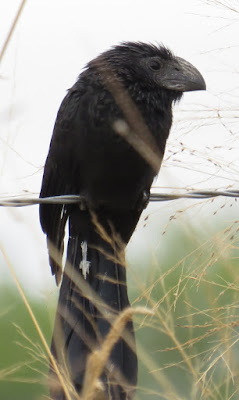 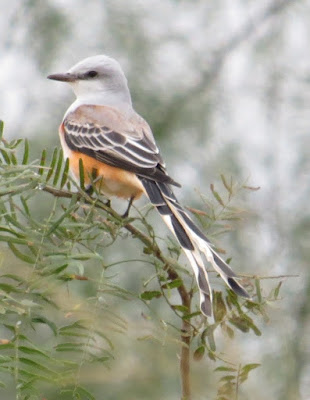 A couple of shots of the Scissor-tailed Flycatcher 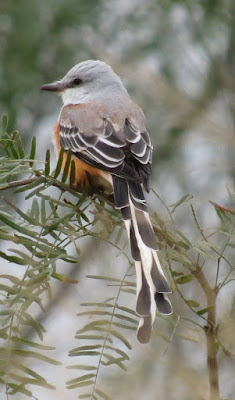 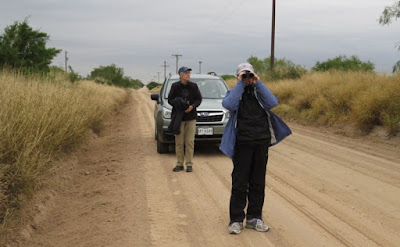 Swinging up to the farm pond at the end of the road, Common Gallinules and a Least Grebe vocalized from the bog on the west side, and we had several Cattle Egrets, Black-necked Stilts, a pair of Gadwall, a Pied-billed Grebe, a Ring-necked Duck, and a female Canvasback on the east side (along with some handsome Blackbuck)!  A Black-and-white Warbler popped up in the dickey department, and at the end of the road where we had to turn around, a bright red Cardinal made the girls’ day!  On the way out three Anhingas kettled up in the sky, and a young male Vermilion Flycatcher posed on the wire. 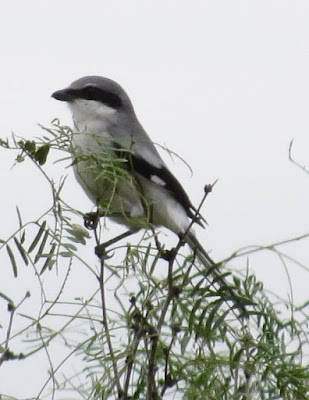 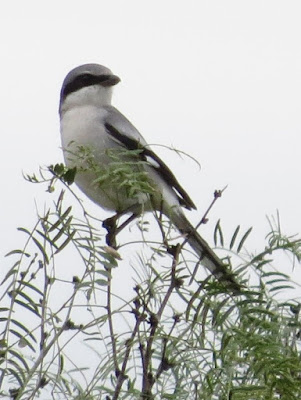 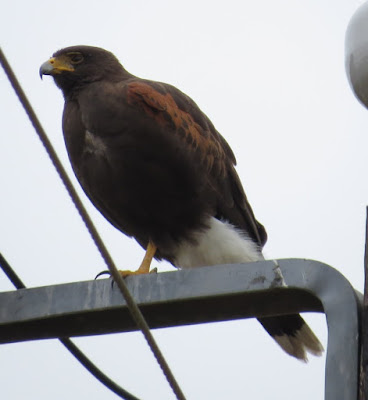 The girls check out the farm pond...

North Brushline on the way out

Heading back down Brushline three Turkeys scrambled behind one of the ranch gates, and after turning on to Ken Baker, we found another pair of Vermilion Flycatchers, one who was trying to gulp down a Snout butterfly that kept getting away from him!  The bog near Rio Beef was back, and had several Sandhill Cranes close to the road, as well as Avocets and more Mottled Ducks.  A very pale Redtail flew over the road that looked good for Krider’s, and a dark morph Swainson’s Hawk also showed well.  The pond out in the barren field had Pintail, and as we wound our way up Jesus Maria to the new NWR tract, we had a tremendous kettle of both Black and Turkey Vultures with a couple of Red-tailed Hawks in with them, one of them a Fuertes’! 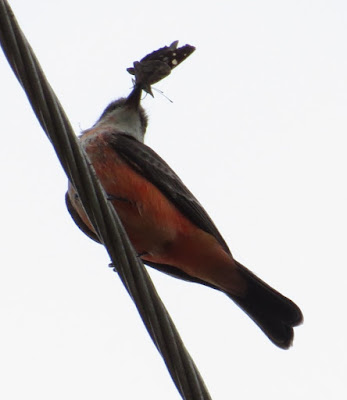 A young male Vermilion Flycatcher with a Snout (note the long nose)! 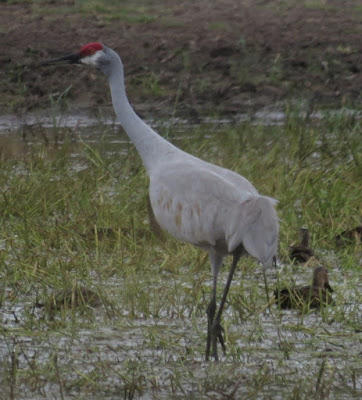 Long-billed Thrashers had been calling all along the route, but stubbornly refused to come out.  Near a wooded area along the new tract, however, another one called, and this time it actually came out, giving the girls great looks!  Daryl also saw what sounded like a first year male Rose-breasted Grosbeak, but since I could never get on it (and it was a “flaggable” bird) I left it off the eBird list.  Near the open fields closer to the north end of the road four Sprague’s Pipits bounced overhead giving their distinctive pike! calls,  and near the residential area at the end of the road one of the silent “yellow-bellied kingbirds” finally vocalized for us, confirming a Couch’s for the day!


We had to head back after that, with 79 species for the trip (plus two subspecies)!  Bird list: