I was really looking forward to this trip, as a) I had never been there before, and b) Tom Lanscheid, one of the official guides with the King Ranch, would be doing most of the work finding the birds! J  He actually joined us in Harlingen, so along with Neil Hayward and a last minute guest guide from the ABA (John Lowry) and a new “Leader in Training” (Isidro Montemeyor), we had a good group of leaders!  We had a bus-load this time, and Neil and John were great helps in passing out the evaluation sheets and eBird info to the folks while I checked them off the roster!  On the drive up Tom gave us some history about the ranch, and how it was originally started by “Captain King”, a steamboat operator, and stayed in the family for over 100 years!  Cattle ranching is their main source of income, of course, but they also grow crops, lease oil fields and hunting areas, and of course give tours, both historical and nature.  The ranch holds the largest population of Ferruginous Pygmy Owls in the U.S., and this was definitely the target bird for most of the folks on this trip! 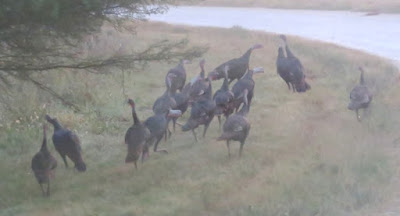 A herd of Turkeys in front of the bus... 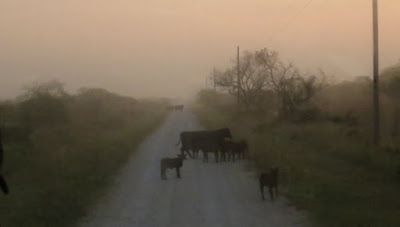 ...followed by cattle and calves! 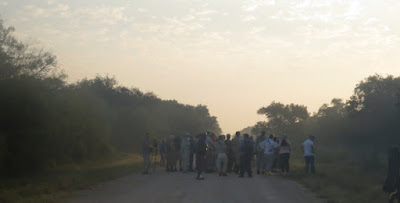 The gang gets ready to spot the Ferruginous Pygmy Owl!

Tom was sweating a little, though, because yesterday’s trip had a calling bird that just did not want to come out!  We stopped at one of the known places, and sure enough, a bird responded, but didn’t seem to want to play ball for a look until one of the participants, Gregg Severson (who also happened to be a guide for Sax-Zim Bog in Minnesota) spotted the thing!  He actually was able to get my scope on it, and eventually everyone got cracking views of the little guy! 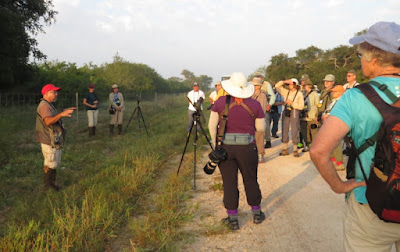 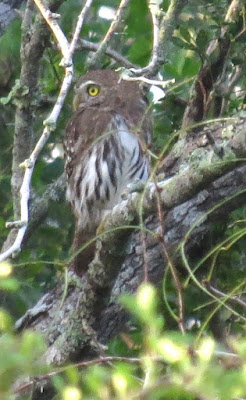 Success!  The little Ferruginous Pygmy Owl looks all around for this interloper... 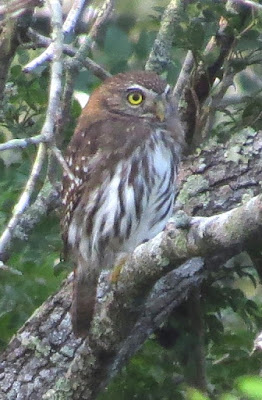 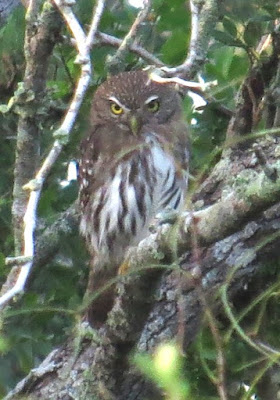 ...and finally glares right at us! 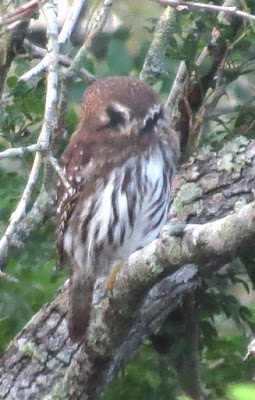 Here you can see the "false eyes" on the back of his head that keep him from being a prey item himself! 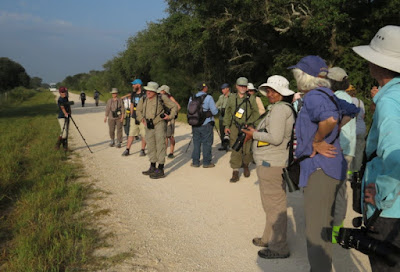 Happy campers after that encounter!

Most everything was gravy after that:  we got fabulous looks at large groups of Turkeys, a very cooperative White-tailed Hawk in a tree, gorgeous fly-by Caracaras, and even a female Nilgai, the Indian antelope that was introduced here and eventually spread all over South Texas!  More walks down the road produced a pair of Audubon’s Orioles, common Valley birds such as Couch’s Kingbird and Long-billed Thrasher, and some wintering things like Blue-gray Gnatcatcher and Ruby-crowned Kinglet.  Even the butterflies were exciting with several Red-crescent Scrub Hairstreaks, which can be a tough bug to see!  Some folks were interested in trying for Vermilion Flycatcher, so we stopped at a wetland that produced the bird, along with a pair of dogfighting “Krider’s” Hawks!  At another stop where we tried to call out a Northern Beardless Tyrannulet, some of the group were distracted by a Sharp-shinned Hawk dogging a Kestrel in a tree! 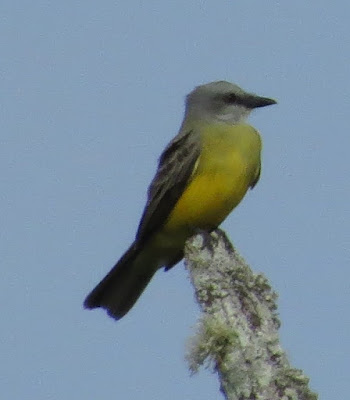 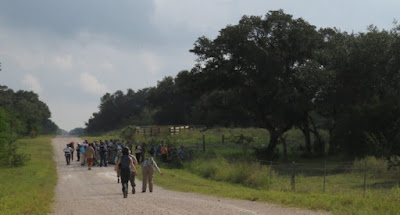 Gang at the tyrannulet stop 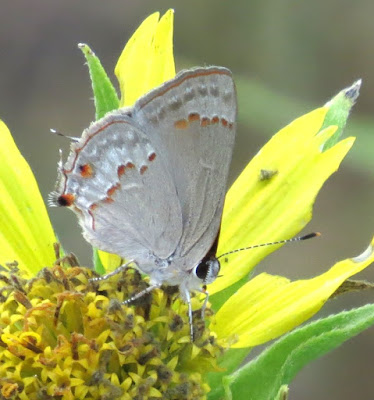 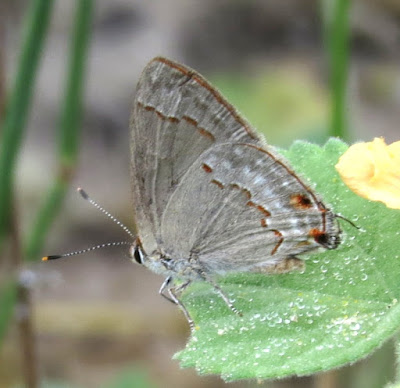 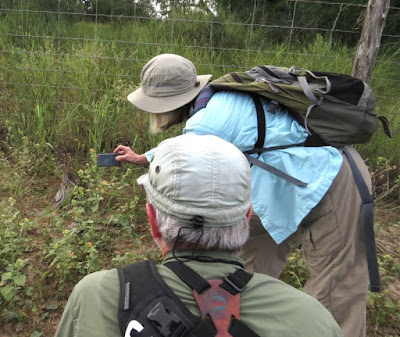 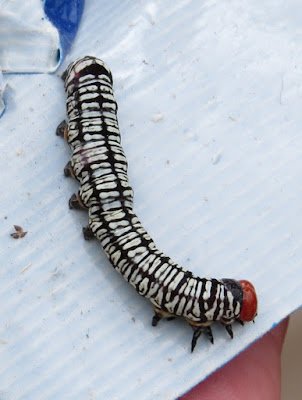 Hieroglyphic Moth caterpillar that hitched a ride on my shoe 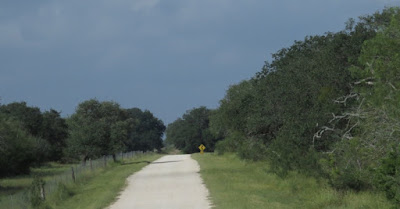 Scene along the road

Wetland that hosted the Vermilion Flycatcher

We eventually made our way to a beautiful open area, near where some of the working families actually live (can you imagine growing up in a beautiful place like that?!).  After piling out, we trekked up a couple of grassy trails in hopes of nailing a Sprague’s Pipit.  We actually split into two groups, and the other group (naturally) actually got one in the scope, while we just saw him fly overhead.  We then headed back to the bus and loaded up, but then Barbara and Whitney (Tom’s fellow King Ranch guides) actually found another pipit (maybe the same bird?) on the paved road, so we all piled out again, but then the bird flew just as we arrived! L  Oh, well…

We really had to get moving, but Tom had one last ditch place for the tyrannulet, so we headed over there, tried calling it in, and that guy put on a great show!  (Unfortunately I wasted a lot of time trying to get him in the scope – which I never could – instead of getting that documentation shot for the blog…)  But everyone agreed that that was the perfect ending to the day! 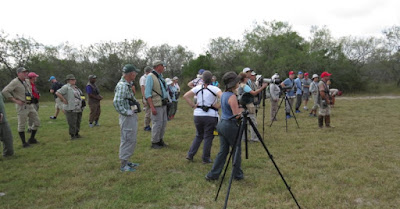 Calling out the tyrannulet

eBird list (which only reflects what I personally saw/heard):