We were all hoping that Derek’s prediction that the rain wouldn’t start until we wrapped up the butterfly trip was true, but while we were all waiting to board the vans in relatively warm temps, it suddenly dropped about ten degrees and started dripping! L  But that didn’t discourage 22 intrepid butterfly-watchers, and we headed out in three vans headed up by Bob Behrstock, Dudley Edmunson, and Mr. Butterfly himself, Derek Muschalek!  Since everyone was a birder as well, we enjoyed the Caracara and White-tailed Kite seen on the way out there!


The dripping was on and off all morning, but Derek knew how to search for cold butterflies hanging tight to the leaves, and right away everyone got to enjoy Snouts, Fiery Skippers, and of course several Queens!  One big brushfoot had us all stumped, but we suspected Mexican Fritillary (which usually sits with its wings open, but not today), so after everyone got good looks and pictures, I tried to coax the little guy onto my finger, when he did briefly show us his dorsal side, which confirmed him as the Mexican Frit.  We also saw a couple of Gulf Fritillaries, and Derek found a Soldier in with the Queens, so he got to point out the “snowballs” (I think he called them) on the ventral hindwing!  (That was probably a better description, as some folks weren’t sure what I meant by a “watermark”…)  In addition to the Fiery Skippers, we also saw Whirlabouts, a Common Mellana,  and plenty of the two dark brown skippers:  Clouded and Fawn-spotted (in fact, one perched on Jean's finger)! 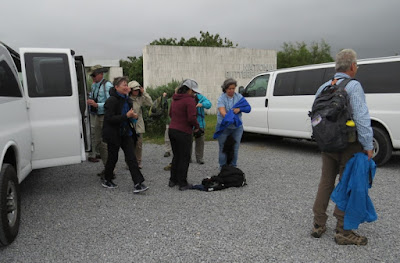 This is South Texas?! 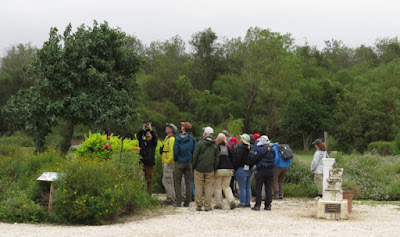 Despite the weather, we still find butterflies! 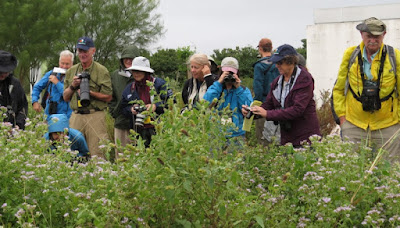 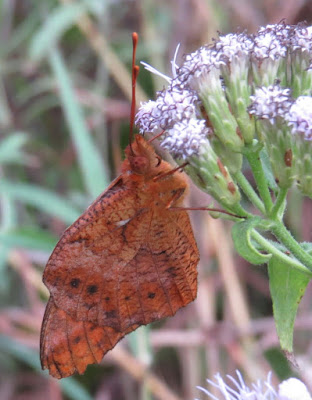 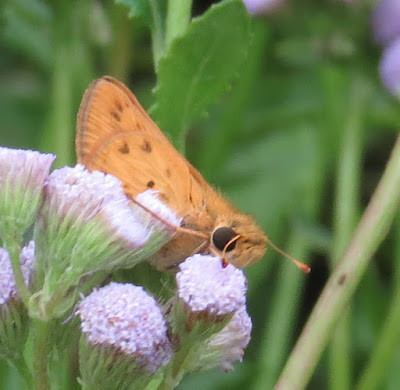 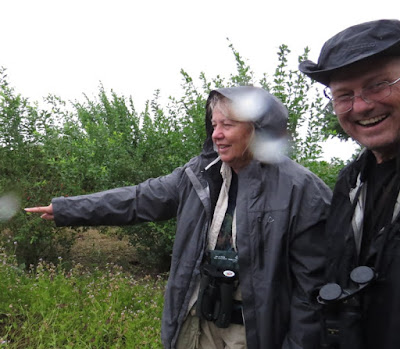 Jean tries to point out a Clouded Skipper and the thing lands on her finger! 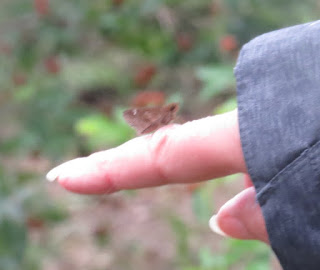 A Roadside Hawk had been photographed there that morning, but it was long gone by the time we got there, along with the Malachite and Gray Cracker that had been hanging out near the woodland trail during warmer times…  But we did find several Tawny Emperors near the bait logs, including one that hitched a ride on my jacket! J  We also saw both Hackberry Emperor and Empress Leilia, but they were hard to pin down as the tell-tale bars on the forewing were hidden!  The Leilia got on my finger and the wind blew her wings open enough that we could see the two solid bars that differentiate her from the Hackberry (who has one bar “hacked”). 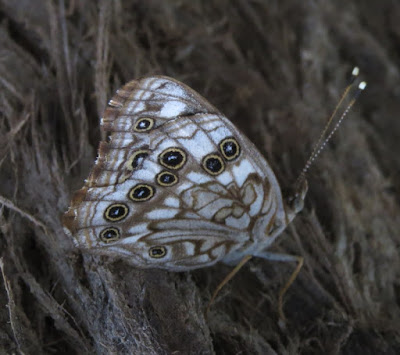 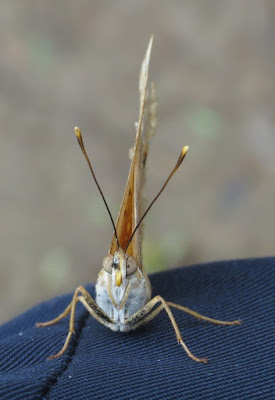 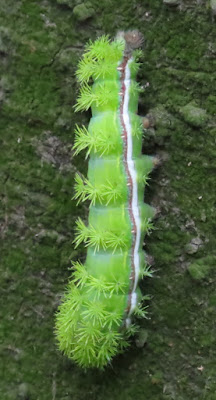 After exploring the Sunken Garden area we actually drove down to the old garden, where we explored the conservatory (which was sheltered) while a brief downpour occurred outside!  But inside we had some nice bugs:  Phaon Crescent, Theona Checkerspot, Laviana White Skipper, and Southern Broken Dash were all winners, plus a huge Vine Sphinx!  We had a bit of a debate over a Fatal/Rounded Metalmark (I deferred to Derek who declared it a Fatal J), and a Short-winged Katydid was a winner in the non-lep department! 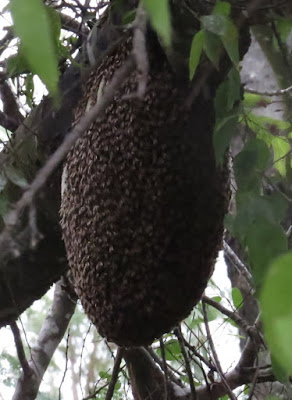 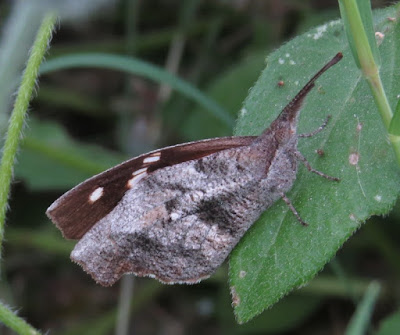 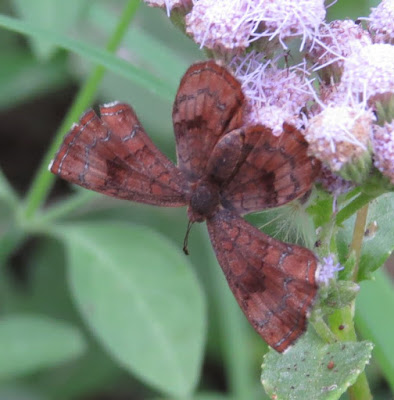 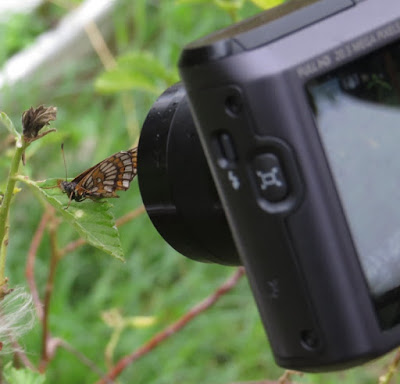 Photo op with a Theona Checkerspot (below) 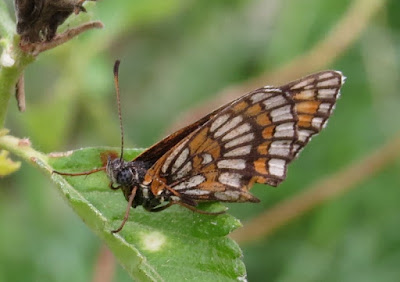 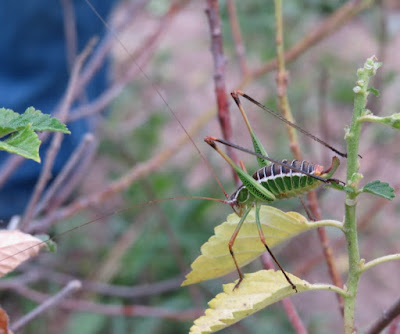 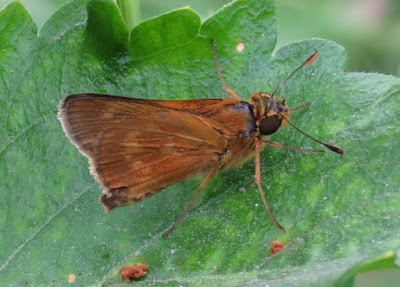 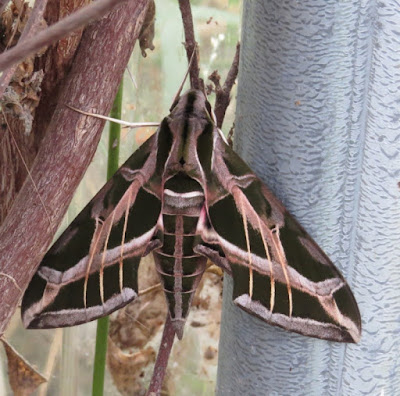 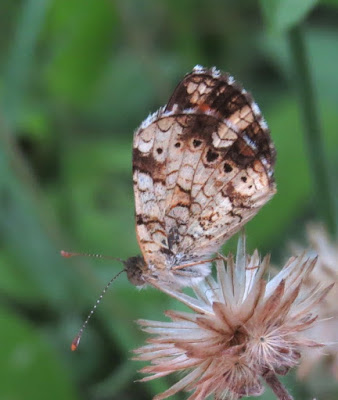 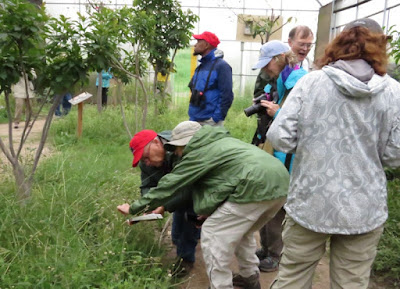 
Once the rain quit we perused the old gardens in hopes of Mexican Bluewings or Red-bordered Pixies, but the most decorative thing we could find was an exquisite little Dusky-blue Groundstreak.  A South Texas Satyr bounced around, inspiring a discussion about the origins of the mythical creature!  Bird-wise we were hoping the vagrant Varied Thrush would put in an appearance, but other forlorn folks had been waiting all morning and it never showed… L  A Gray Hawk flying overhead and calling was the most exciting avian action, along with a mob of Chachalacas that checked out the feeder area; even the Green Jays weren’t interested in coming in! 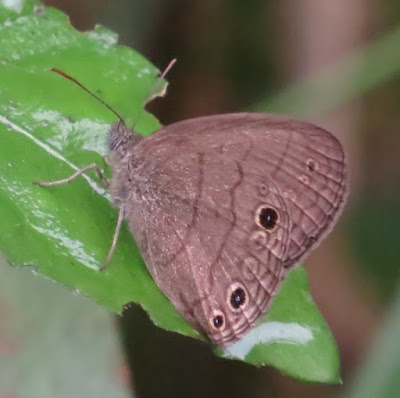 Chachalacas descend upon the feeder area 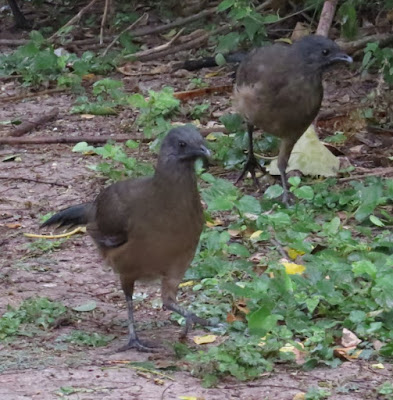 We continue to find butters! 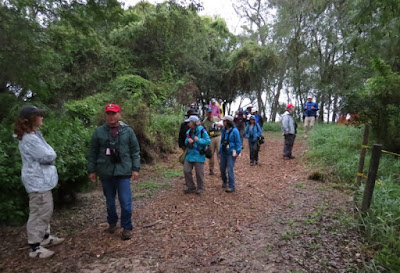 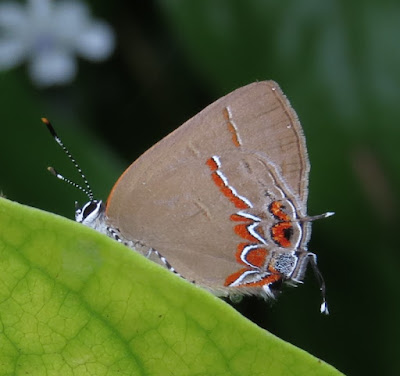 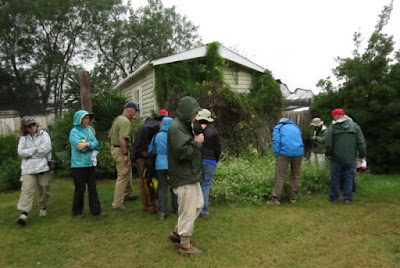 After having lunch in the shelter we packed up and headed to the vans after Derek showed us our last butter for the day:  a hiding Mallow Scrub Hairstreak!  Butter list: