I was really concerned about the weather today, as it was supposed to be cold and rainy, and as one person quipped the day before, “You will get wet!”  But I was pleasantly surprised by the migrant show at the Convention Center (herewith CC)!  I got to meet Jesse Huth, a young man who works for Partnership for International Birding, along with Arturo Kirkconnel (a guide from Cuba, also with PIB) and Rene Valdez, a Mexican bird guide.  We had a small group, so after piling on the bus we headed out and finally arrived at the CC, and thankfully the rain had let up, although it was still very gloomy.  We hadn’t gotten far from the bus before Jesse announced that he had a Brown Creeper climbing the wall!  This is a very rare bird for the Valley (and my first for the area); the bird left only to return and whang into the door and stun himself, but everyone got to see him well as a result; Jesse rescued him and placed him on a little branch in the vegetation!  (Others later would report that he recovered nicely and made a lot of visiting - and local - birders very happy!) 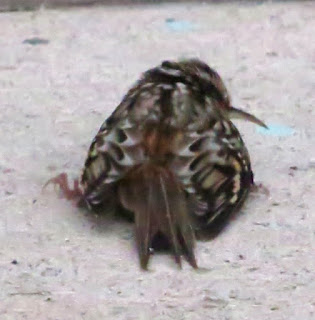 The hapless Brown Creeper after nearly knocking himself out... 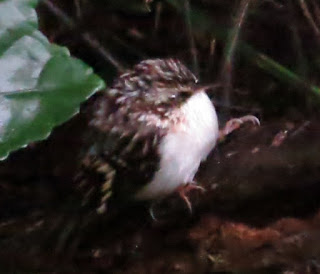 ...and after being rescued by Jesse!

We quickly checked the water feature and then headed onto the southern sidewalk where we noticed skein after skein of ducks and geese flying overhead; we were able to ID a couple of flocks of Snow Geese, but the ducks were way too high to tell (we reasoned later that some of them could have been Redheads).  In the dickey bird department we had a cooperative Eastern Wood Pewee, and others spotted a Summer Tanager and some Ruby-crowned Kinglets.  At one point a warbler we assumed was an Orange-crowned morphed into a Tennessee when Jesse spotted the tell-tale white undertail coverts!


Continuing on, Jesse’s young eyes spotted a Wood Thrush, and other participants spotted both the reported Swainson’s Thrush and also a Hermit (I got a glimpse of the former)!  An American Redstart also showed next to some Collared Doves.  We eventually made it to the Flats Overlook, where good numbers of various lounging larids were out there but quite distant.  We were able to pick out a Reddish Egret in between two Great Blues, some Franklin’s Gulls hiding in with the Laughers, several Black Skimmers, and three species of terns to sort out.  Both White and Brown Pelicans gave good size comparisons, and a lone Pied-billed Grebe stuck its head up like the Loch Ness Monster!  A Sedge Wren called in the middle of all this but of course wouldn’t come out; the Indigo Buntings feeding in the grass were much more cooperative!  On the way back to the boardwalks a Catbird entertained us by trying to swallow a big red berry, and Arturo found a Black-throated Green Warbler (I later saw one without a tail…). 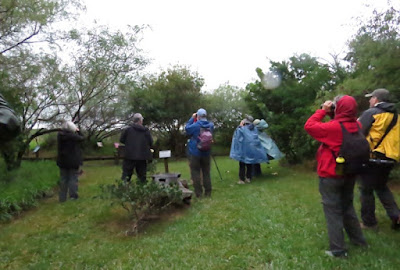 The gang in the Convention Centre's "back yard" 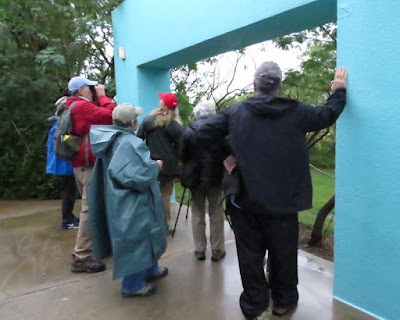 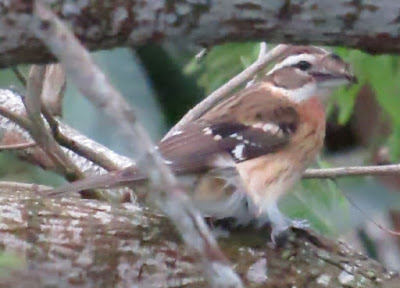 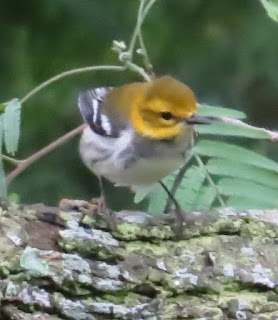 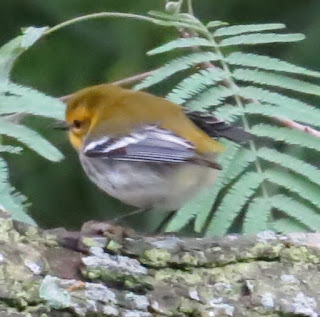 We finally made it out onto the boardwalks where the gloomy sky actually worked in our favor, as we could view the “east pond” with no glare!  We enjoyed snoozing spoonbills, several Blue-winged Teal, coots and gallinules, and a Black-necked Stilt.  A Least Bittern cackled way back in the stuff, but no one wanted to volunteer to go flush it out… J  Jesse found a female Anhinga sitting quietly, while a Belted Kingfisher rattled and darted about.  There was nothing of note at the end of that leg, and we were just getting ready to go down the other leg when someone announced they had a Hooded Warbler at the water feature!  That got everyone back into the “back yard” (and the custodian finally opened up the restrooms to the relief of most everyone J) where people kind of spread out and refound some of the earlier birds:  a Lesser Nighthawk shot through, and Rene found a Yellow-billed Cuckoo back in the foliage! 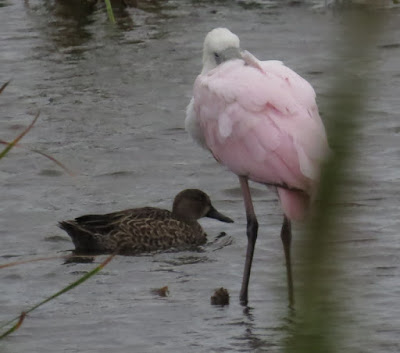 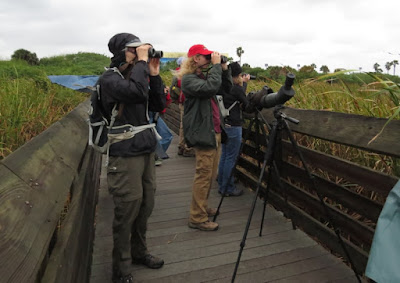 Jesse (in the red hat) looks for goodies along the boardwalk 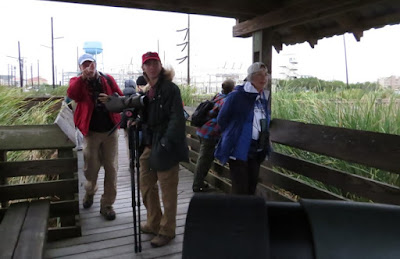 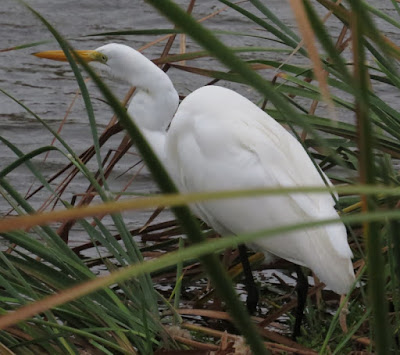 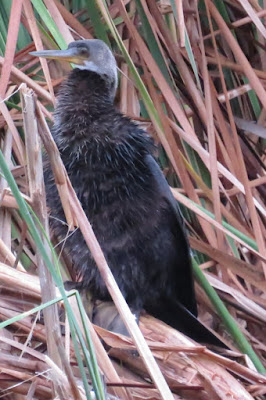 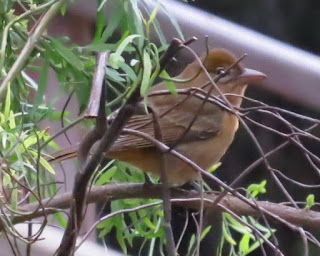 
Before long it was time to recall Jose (who had to park the bus in the “big lot”) and head over to Dolphin Docks for the Bay Cruise, which was also a new experience for me.  It was too blustery for Scarlet Colley to take her group out in her small boat, so Mary G. arranged to have them join us (seeing as we were only 18 people), and spirited away Rene, giving us Chris Benesh (a professional guide for Field Guides) in return!  Scarlet also joined us, and greeted her aquatic charges enthusiastically as we left the dock and were joined by several dolphins! J 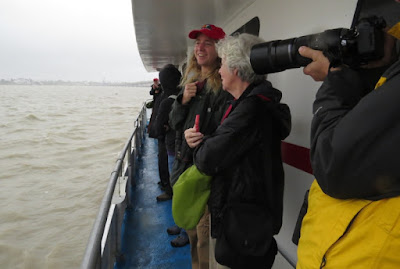 The captain had initially shown reticence at heading across the bay to Pier 19 for the Masked Booby (another very rare bird away from its pelagic haunts), but apparently changed his mind as we made a beeline over there, paralleling the famous causeway!  The booby was actually sitting on the steps of the pier, but when he saw us coming his way he took off and came straight for us!  Landing on the water, he proceeded to bathe and look for tidbits under the surface, but Scarlet confirmed that people were feeding him little bits of fish, so it probably was no surprise that he came to greet us, expecting a treat! 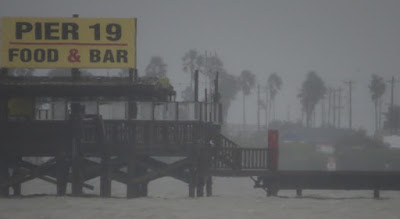 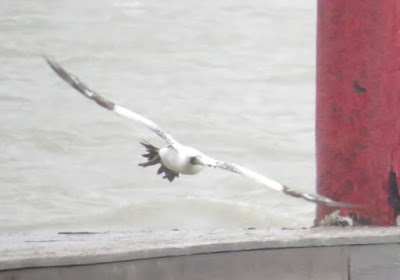 He sees us coming and comes out to meet us! 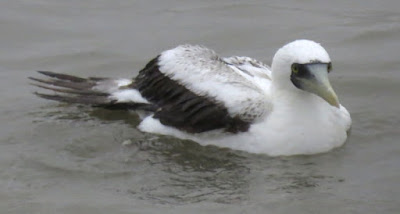 Everything was anticlimactic after that, but Scarlet did have the captain take us over to some mangroves where they had the Mangrove Warbler the day before, but it was probably too blustery even for them!  We did manage glimpses of the Surf Scoters that had been sighted by the causeway along with Scarlet’s first Common Loon of the season, and had more views of various larids and pelicans, best of which was a Sandwich Tern that flew close and provided several folks a great “lifer” view!  Going by some beaches we even managed a Snowy Plover!  We enjoyed a very wet Osprey coming in, but the icing on the cake was back in port where a Peregrine Falcon was sitting on the rigging of a shrimper! 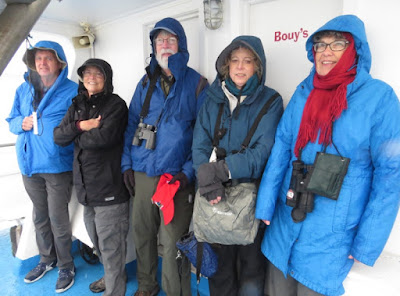 Some of us huddle in the stern, away from the wind!

Sandbars and mangroves where the unique "Mangrove" Yellow Warbler hangs out 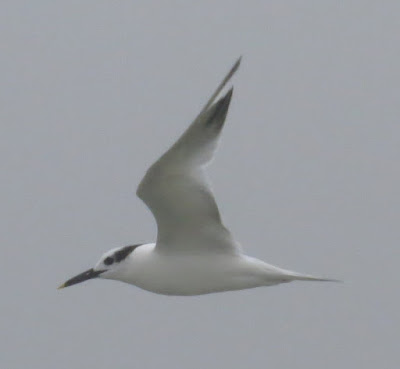 A Sandwich Tern powers by 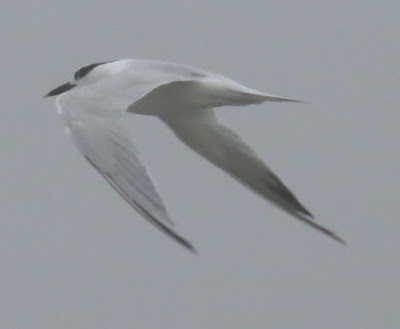 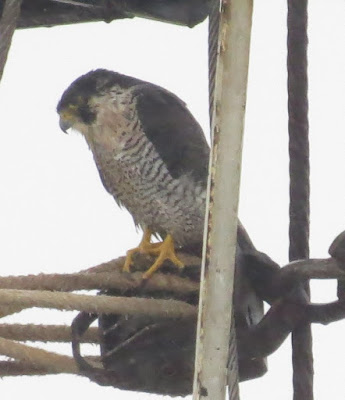 Peregrine Falcon back at port!

We were cold, wet, and tired after that, but it was a great day with lots of birds!  SPI list: