This year I had the privilege of helping guide some of the field trips for the 25th anniversary of the Rio Grande Valley Bird Festival!  My first field trip was with Bob Behrstock from Arizona, and we ended up taking a handful of people to two of our best urban hotspots:  Frontera Audubon Thicket and Valley Nature Center!

Our first stop was Frontera, and right away in the parking lot we had a Clay-colored Thrush that gave us an obscured view.  We then crawled in and checked out the water feature while Bob gave the gal on duty our head count.  Tracy (one of our charges) had already seen the Golden-crowned Warbler (they had already been here a week but George had just arrived the night previously), so she was showing us the areas where the bird had been.  Unfortunately I didn’t heard a tic anywhere on the property, and things were difficult to see and didn’t want to come out to pishing (and George couldn’t count a bird unless he photographed it), so we had several frustrating “heard-onlies”, including the resident Carolina Wren.  We did eventually run into a feeding flock that had the independently-thinking Golden-winged Warbler (expected in spring, but not in the fall), some Black-crested Titmice, and a White-eyed Vireo, and Bob got a glimpse of the Wood Thrush that had been hanging around!  Things were a little more visible at the big pond with a large group of Black-bellied Whistling Ducks, but at the big overlook Herbert (a guide from Uganda) spotted a bird that, by his description, sure sounded like the Golden-crowned Warbler!  I only glimpsed it as it dropped down, but someone else saw it as well, and both confirmed that it was entirely lemon yellow below and grayish above, although neither person saw the head.  We went ahead and counted it for the eBird list… 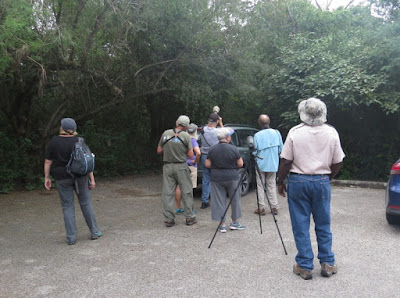 Continuing on, we came across a group of White Ibis lining the boardwalk railing, and someone spotted a hawk sitting on the very end!  Like what happened to the Birder Patrol at Fireman’s Park, we were getting ready to call it a young Cooper’s, when we took that second look and saw the “checkerboard” pattern on the secondaries, revealing it to be a young Red-shouldered Hawk!  (And he called later just to prove it… J)  Chris (Frontera’s “mom”) came by about then reporting about 80 White Pelicans in the big Payne Pond!  That was an amazing sight, along with a couple of Black-crowned Night Herons, a Great Blue, and both Great and Snowy Egrets. 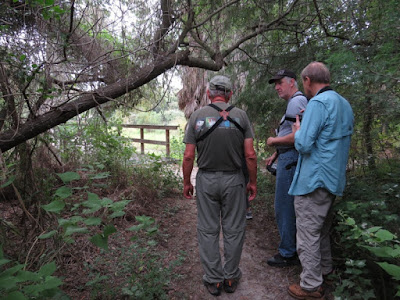 Pausing before the boardwalk in order not to scare off... 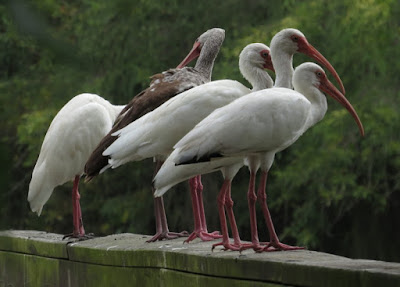 We circled around the back and through the Sabal Palm grove with not much to show, so we headed to the feeders where titmice were coming into the “circular area” but on the back side of the feeder! L  Bob then led everyone to the next feeding area where a White-tipped Dove saw us before most of the folks could see him, and sadly took off…  But a Buff-bellied Hummingbird decided to come in and say hello.  Then we went to the “old” feeding area where the Chachalacas finally came out into the open!  One enjoyed swinging on one of the feeders, while a couple of Long-billed Thrashers called to the side but never came out.  A male Cardinal kept pretty hidden as well, and a Belted Kingfisher flew overhead rattling.  Heading back towards the VC we ran into the feeding flock again, where a Black-throated Green and Black-and-white Warbler showed for some folks.  At the orchard water feature, a nice male Wilson’s Warbler came in, and George was nowhere to be found! L  I think he finally did get that one, along with the titmouse…  We made one more short loop for the warbler and picked up three domestic Muscovies in the Payne Pond and a Green Kingfisher in “his” resaca that a few folks got a glimpse of before he shot back into hiding… 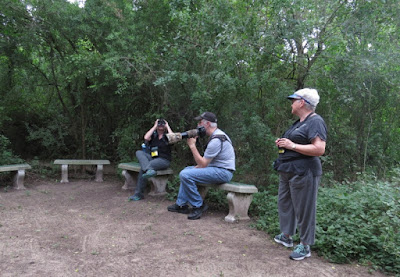 Waiting for a titmouse to come in... 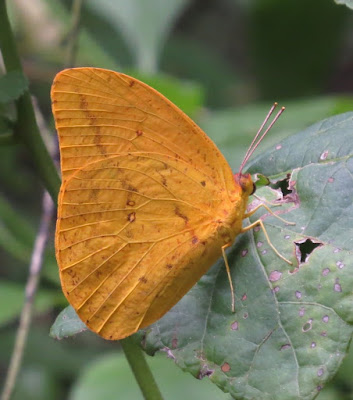 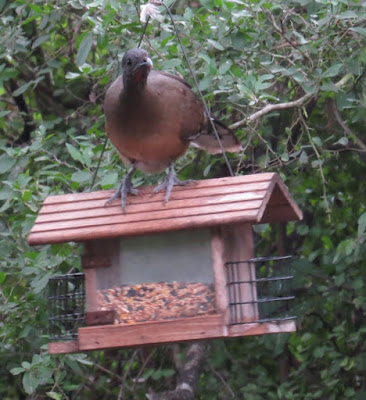 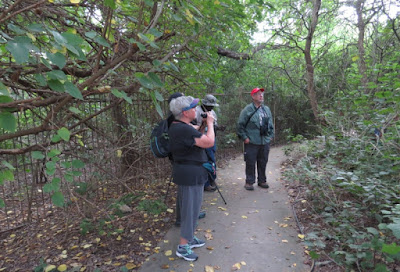 Bob (in the red hat) looks for warblers 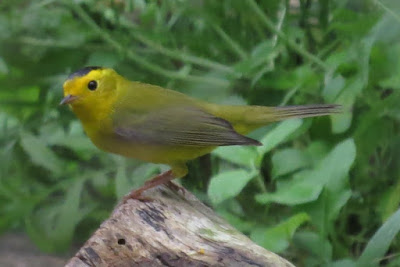 We decided to head on over to Valley Nature Center after that, and Bob was pretty impressed with the new building!  Both Soft-shelled Turtles and Red-eared Sliders approached us while we viewed them from the boardwalk, but come to find out they were actually begging!  That was really the most excitement there as we flushed a couple of Inca and White-winged Doves and spotted their resident leucistic Chachalaca, but there was nothing at the main feeders except a Buff-bellied Hummingbird that took a sip of nectar, so we made a command decision to return to Frontera as there were birds there! 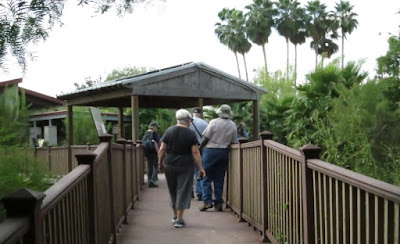 On the walkway connecting the VC with the trails 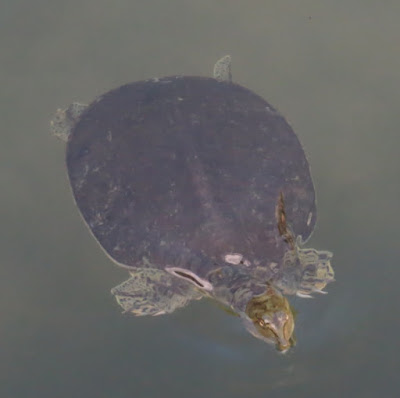 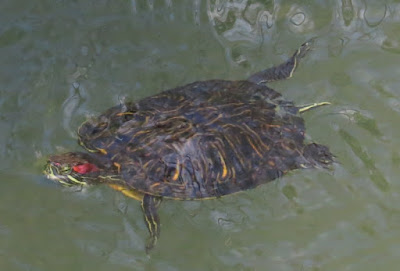 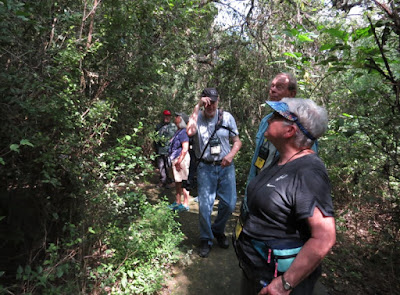 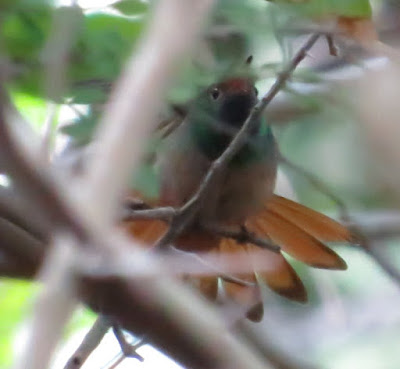 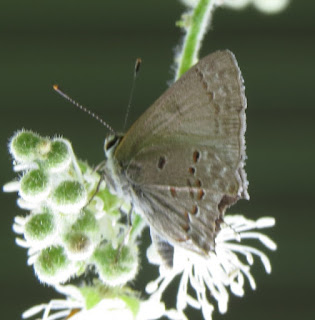 Tracy was adamant that if we broke into smaller segments the warbler might be more willing to come out, so that’s what we ended up doing, and by doing that not only did she and I (plus hubby Jim) get great looks at the Clay-colored Thrushes in the orchard, but the Wood Thrush actually allowed a look!  She was very excited as that was a Texas bird for her!  We went back into the woods looking for the others, and while I was trying to pish out a Carolina Wren for George, Tracy called me back as she had found an odd-looking warbler that turned out to be a Pine!  Bob had taken his party out towards the back and didn’t see much except some Green Jays and a Couch’s Kingbird, and we actually ran into Mary G. leading a small group of people around!  We never did find the Golden-crowned again, but that Wood Thrush made my day (like the Golden-winged Warbler, they’re expected in spring but not in fall, and certainly not this late in the season)!


Since we got started late we stayed out a little later, but we were fading fast, so after having everyone fill out their evaluation forms we called it a day and headed back to the auditorium.  Here are the two eBird lists: