The original plan for the monthly Bird Patrol trip was Port Mansfield, but in the meantime a rare Black-whiskered Vireo (BWVI) showed up at the South Padre Island Convention Centre!  Discussion amongst the core members was had, as the vireo had shown up early in the week and the trip wasn’t until Saturday – would it stick around?  History with Texas BWVIs suggested it wouldn’t, but the majority voted for South Padre anyway (there’s always something to see there regardless), and as it turned out, that was the better choice as the biggest fishing tournament of the year was to take place in Port Mansfield that day!


So meeting at the Jack-in-the-Box on Ed Carey in Harlingen, our group consisted of myself, Norma Friedrich, Sue Griffin and her hubby Billy Snider, Marilyn Vincent, Alicia Cavazos, and Linda DeRosiers (the latter two who met us there).  The bird hadn’t been reported since Wednesday, so we knew  we were taking a chance, and as we arrived we could tell right away that the place was gonna be pretty dead; about all that were around were grackles and mockingbirds (although I thought I heard an oriole at one point).  I mentioned that the BWVIs I had seen in Florida were almost always associated with mangroves, so we decided to head out there before it got too hot. 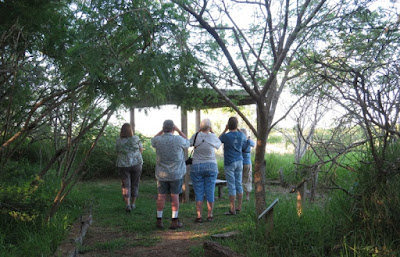 The Birder Patrol checking the back side

We definitely had more action there, although it was all of the waterbird kind (except for the Common Nighthawk batting around):  in the little flat to the north, we found a pair of Wilson’s Plovers along with two adorable babies!  A few Black-bellied Plovers and a Willet were also hanging around along with a few White Ibis, but nothing but blackbirds were in the mangroves.  Out on the pier we had a Pied-billed Grebe and a pair of Neotropic Cormorants, and Alicia spotted some Brown Pelicans way out there, but we ended up sitting under the shelter and schmoozing quite a bit! J  On the way back we tried to pick out what was in the “east pond” (always tough when you’re looking into the sun) and were entertained by several baby Black-necked Stilts, and adult White-rumped Sandpipers being chased by the parent stilts!  Ruddy Turnstone, Dunlin, Reddish Egret, Common Gallinule, Great Blue and Yellow-crowned Night Heron, and a cackling Least Bittern were also added to the list (Billy was the only one to actually see the bittern, though). 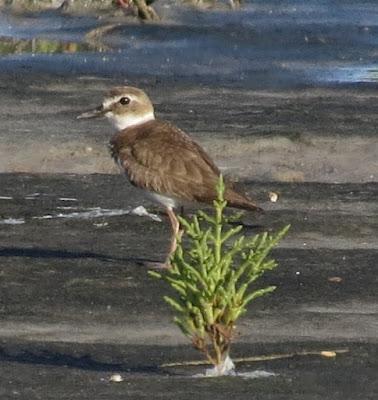 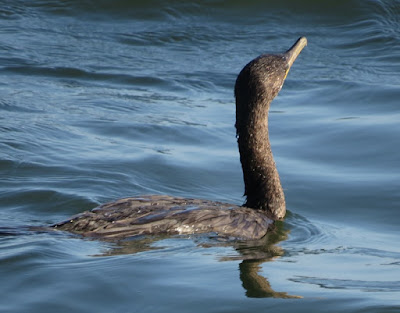 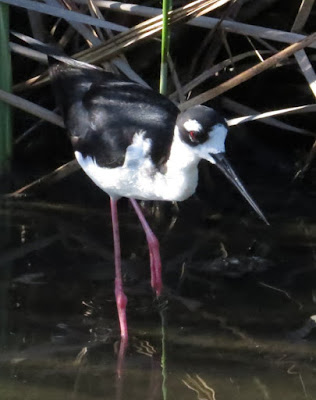 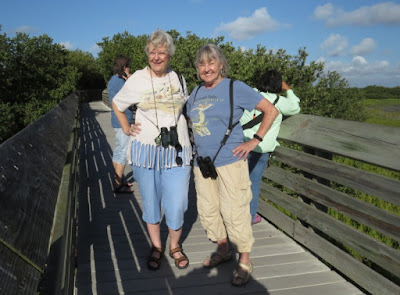 Norma and Linda pose while Alicia checks out the plovers... 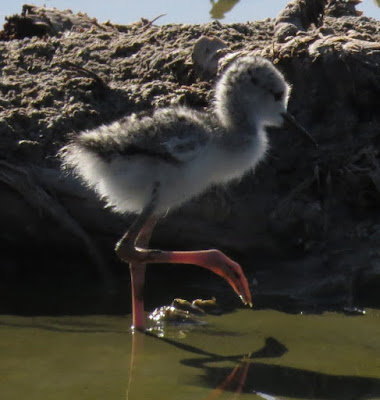 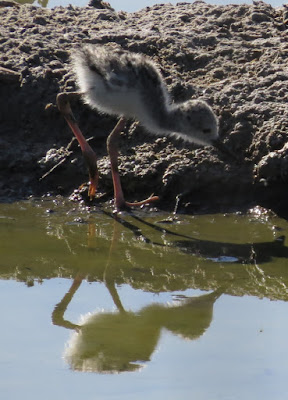 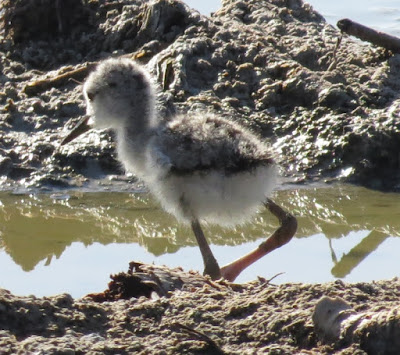 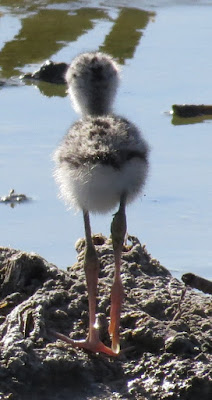 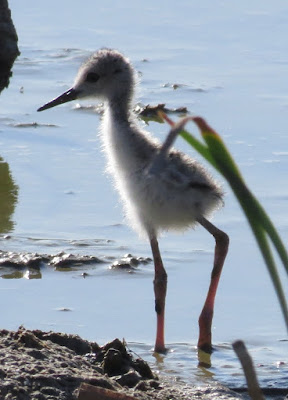 Check out those legs!

After that Norma, Alicia, and Linda had to leave, so the rest of us piled in Marilyn’s van and headed to The Flats in order to give our feet a rest!  The birds weren’t as numerous as they normally are, but we added Royal, Caspian, Sandwich, and Least Terns to the list, as well as a dancing white morph Reddish Egret and a couple of Sanderlings.  After searching in vain for more plovers, we headed over to the Birding Center to use the restrooms and get a book Sue was looking for as a gift.  In the meantime we began chatting with Javi Gonzales, the staff naturalist (who inadvertently got interviewed by the Valley Morning Star while manning the front desk, so everyone was complimenting him on the article) and Stephanie Bilodeau, who was about ready to give a talk on the conservation of coastal birds, so we stayed and listened, but not before taking a peek out back into the wetlands and enjoying a pair of Black-bellied Whistling and Mottled Ducks in great light! J  She shared how her organization (the Coastal Bend Bays and Estuaries Program) is monitoring the nesting birds that are dependent upon coastal habitat (especially the local Snowy and Wilson’s Plovers), and it was very informative (and the baby plovers provided a cuteness overdose… J)!

Royal Terns on The Flats 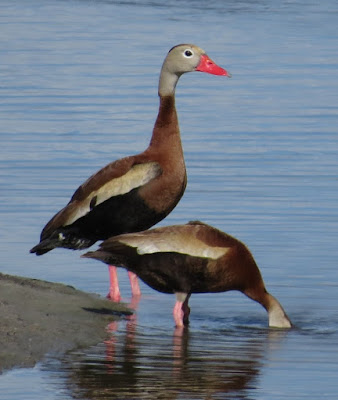 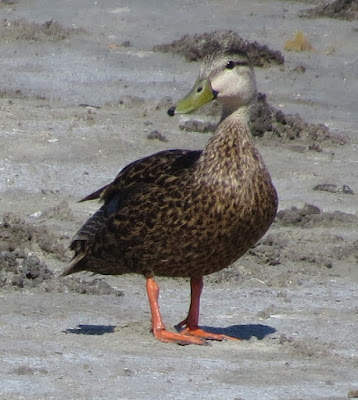 Mottled Duck (with his "muddy duck" mate below) 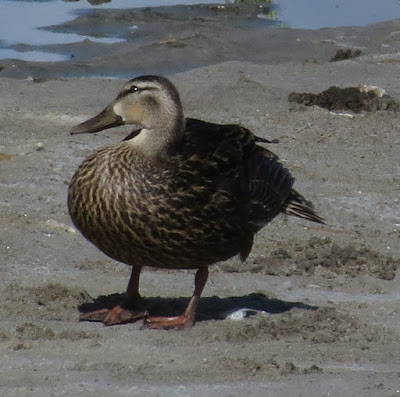 From there we decided to go to the gang’s favorite lunch place, El Papa’s in Port Isabel (and witnessing the traffic coming onto SPI we realized we were leaving just in time), for their fried shrimp fix, and it was a delightful little place!  After lunch we headed down SR 48 to the famous boat ramp, picking up several Chihuahuan Ravens on the way, but alas, there were no oystercatchers about, although we did have a very cooperative Ruddy Turnstone and enjoyed several Black Skimmers sailing around!  Heading back into Port Isabel I think I was the only one to see the Harris’ Hawk on the pole… 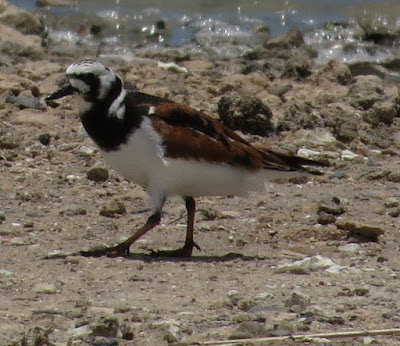 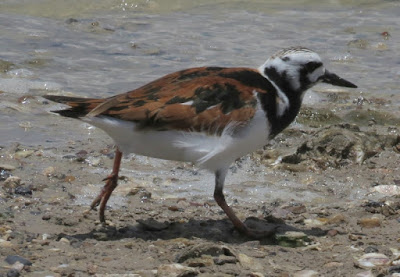 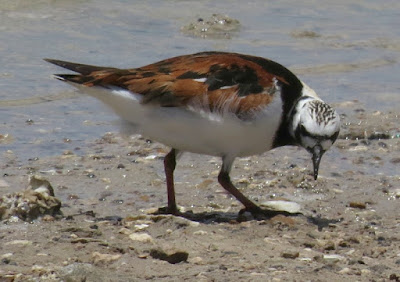 Showing the streaks on the cap 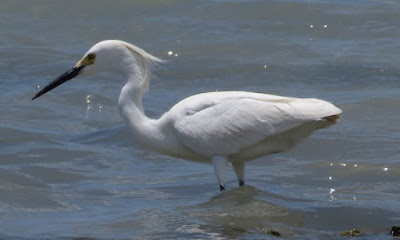 We were going to head back to Ed Carey from there, but while traveling along SR 100 I asked the gang if they knew where this Laguna Vista Nature Park was, as every time I’d try to find it I’d get lost! L  They had, but couldn’t remember how to get there, so we went on a “wild park chase”, first turning north on Mesquite from SR 100, but then realizing we were gonna hit the main drag before finding a park, we made a left on Taylor, and where it T’d with Palm, there it was in front of us (and to the left a little)!  But as we pulled in the caliche lot, Billy saw the paved parking lot across the way and said, “That’s where we parked!”  So from there we headed straight up Palm to Broadway (the road I had originally turned onto from FM 510 where I was told to “turn left after the library and before the church”), hung a left, and continued on Broadway, thinking that would swing around and take us there!  Well, I quickly realized that was the mistake I had originally made wandering around that neighborhood and not being able to find it, so we turned around, tried hanging a right on unmarked Fresno, then another right where it T’d on Palo Blanco, and there it was!  This is a spot that has gotten rave reviews that I always wanted to take our guests to, but could never find it, and I was so happy and thankful to Marilyn for being willing to take this detour!  (Then we had to plot the course going backwards:  after making the turn past the library, you take the second left – Palo Blanco – and just go to the end!)


From there we decided to explore some more and took Ted Hunt north to the newly renovated General Brandt Road; we stopped at a sorghum field to see if any Dickcissels were singing, but it was dead quiet in almost 100-degree temps!  We added Loggerhead Shrike on the way up, but we could find no hawks, and the resacas were bone dry.  So taking the detour around Rio Hondo, we made a brief stop at Lantana Lake on Sam Houston, where we added Avocet, Stilt Sandpiper, and a lovely Wilson’s Phalarope to the list.


Finally made it back to the JITB after a wonderful day of birding; even though the species list was scanty (compared to what you usually get after an outing to SPI), the fellowship was great!  Bird List: