I had been wanting to “survey” the resurrected McAllen Nature Center for a while, and finally was able to get over there last Saturday!  When I first visited the place in 2006 (when I still lived in San Diego), I definitely got a “creepy” feeling, and come to find out the place was a hangout for drug dealers and other nefarious sorts, and eventually the park was closed.  After I moved to Texas, the area was threatened to be turned into a tennis court, but thankfully the citizens voted to keep the acreage as a nature park and restore it to its previous beauty.  The “new and improved” McAllen Nature Center is now a beautiful and safe place to bird, with many volunteers manning the entrance and the park during the day (and a patrol at night, I understand), with butterfly gardens, feeder areas (stocked during the winter), and good trails through the thornscrub.  A fence now separates the nature center from the larger city park next door, so that also helps in keeping out the riff-raff.  Near this fence is a nice little patch of marshy reeds; while I had no water birds there Saturday, the Cave Swallows were obviously nesting under the culvert as they came out in droves! 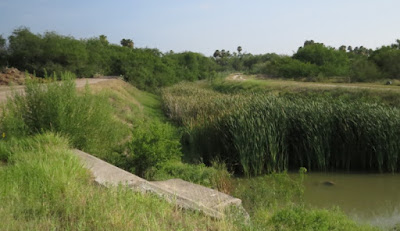 Wetland near the center

But I’m getting ahead of myself:  they technically open at eight, but I left Alamo at seven with plans to bird the area outside the parking lot (also fenced off) until they opened.  There’s a canal running parallel to the entrance road, and in here I had a Yellow-crowned Night Heron and a female Green Kingfisher!  The crew actually showed up early, so I wheeled in, parked, and headed down to the sign-in trailer; this road is bordered by tall woodland and on past trips was great for migrants.  After signing in (the park is free) I ran into Ernest, one of the naturalists there, who told me to be on the alert for “their” House Finches!  After that went and sat for five at a picnic table under a huge ebony (I think) and watched the Purple Martins playing around their apartments (along with a couple of House Sparrows).  A Clay-colored Thrush also apparently had a nest nearby as I watched it shoot past with nesting material! 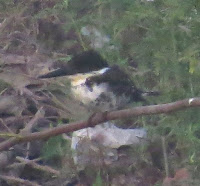 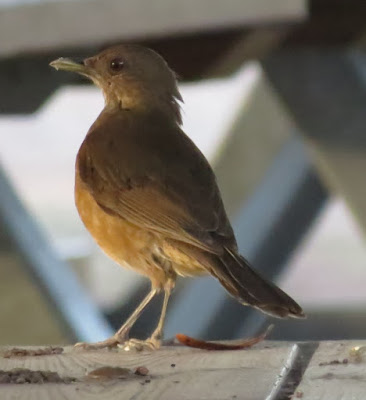 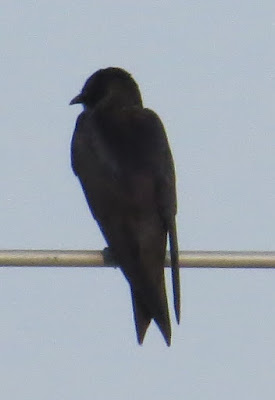 Purple Martins (female on left below) 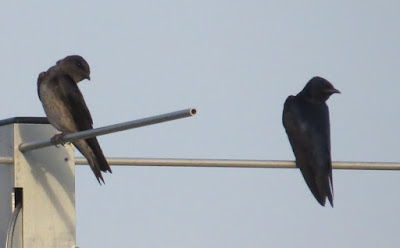 After that I headed into the thornscrub maze, where more “babies” showed themselves:  Curve-billed Thrashers were especially curious, and as I kept to the right, I came upon a “new” area that circled a more open patch of thornscrub where a Chachalaca came up to look at me curiously!  It was in this more open stuff that I heard a Blue Grosbeak as well.  Back in the thicker stuff a Long-billed Thrasher sat up top and sang, and it was fun to watch the White-tipped Doves strutting across the floor and cooing at one another as well.  One White-eyed Vireo finally showed himself, and a Common Ground Dove was at one cul-de-sac.  Even though there’s quite a bit of Cactus here, I was surprised to hear a Cactus Wren singing and scolding, as I expect them in areas where the cactus isn’t quite so isolated!  Out the other side and near the park fence, a Hooded Oriole “wheeped” from a palm tree.  One young man excitedly pointed to the area where he had seen a “Black Mambo”, and although it was long gone I assured him that what he had probably seen was a harmless Indigo Snake! 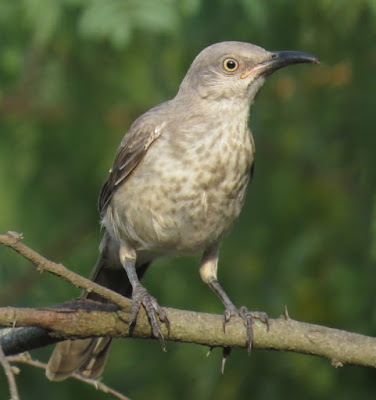 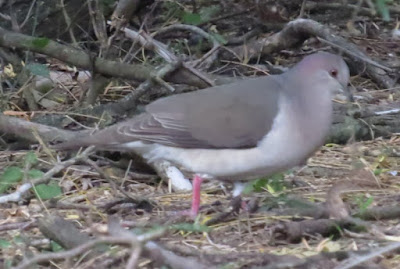 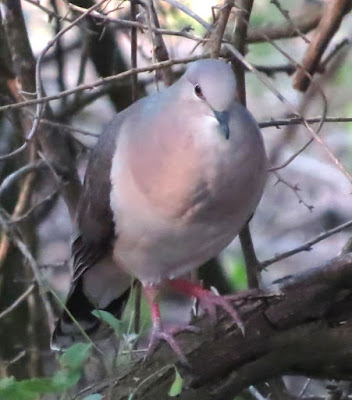 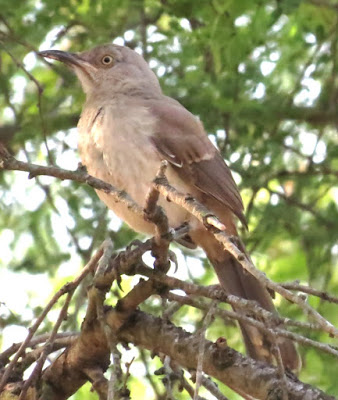 Another baby Curve-billed Thrasher, not quite as spotty as the other one 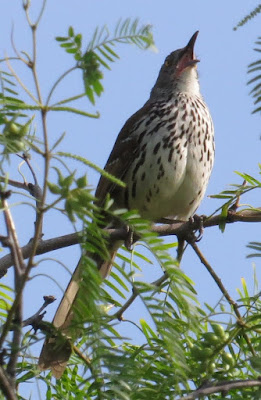 Circling back around, the Buff-bellied Hummingbirds liked the little butterfly garden, where not much was flying yet except a Brown Longtail and White Peacock.  There’s a trail up a hill that was new since my last visit, so I crawled up, hearing Ernest’s House Finch singing away in the palm at the top!  By the time I got up there he flew off with his mate, but it was basically a nice overlook with several benches to rest on.  Back down at the bottom, a Black-chinned Hummingbird sat briefly in a twig before I checked out another trail that went south towards the city park and emptied close to the aforementioned wetland with the reeds. 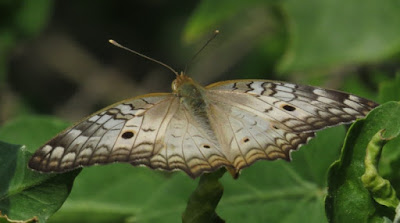 From there I headed up to Edinburg Scenic Wetlands, fully planning on surveying both the north and south sections, but by the time I got there it was so hot that I decided to stick with the north pond!  (I at least heard a Black-necked Stilt coming from the south pond, and had a Black-bellied Whistling Duck fly overhead…)  Despite the heat there were some nice birds; I made a loop around the perimeter and enjoyed the “tame” pair of Long-billed Thrashers bopping along the trail, then spotted a couple of Chachalacas deep in the scrub!  Along the “Forest Trail” a Groove-billed Ani flopped across the trail and gave me the looking over, then showed up again near the pond with some grackles!  A Green Heron was hiding close to the shoreline, while the east side of the pond was lined with the usual Neotropic Cormorants and Great and Snowy Egrets.  While sitting at the deck Ken Wilson wandered by and announced he had a Guava Skipper back on the tenaza!  (I couldn’t find the little bugger, though… L)  So continuing on to the next overlook, there seemed to be a little more action when all of a sudden a big mob of cormorants came in and started feeding, shortly joined by a White Pelican (which should be long gone by now, I would think)!  Down by the spillway a Forster’s Tern, plus two Gull-billed Terns, were batting around as well. 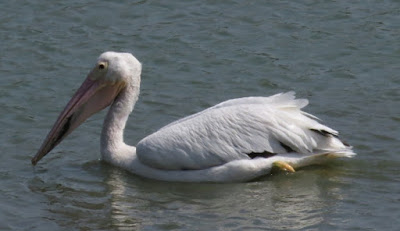 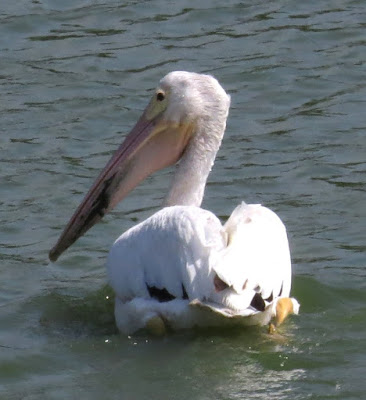 Decided to walk down the inner trail paralleling the canal and sat at the colorful children’s blind for a while; except for a bubbly White-eyed Vireo, it was deathly quiet until I pished, and then a female American Redstart popped up!  She definitely was supposed to be gone by now!  As I got up to leave a Green Kingfisher rattled from the canal.


Called it quits after that, but still took a quick look at the big pond at the east end of Doolittle Park where a few families were feeding the domestic ducks; another White Pelican was on the shore, but nothing else “wild” to add to the list.


Here are the eBird lists, first from McAllen Nature Center, and then from Edinburg Scenic Wetlands: