Having had to postpone the Hidalgo County Birdathon until May 3rd due to a blown tire and ruined rim L, I was hoping the later date wouldn’t affect the species count too much!  But while I missed some things I had last year, this year was much more productive!


It started outside the apartment with a Western Kingbird (1) singing his dawn song and Purple Martins (2) gurgling overhead unseen in the dark.  Our nesting Lesser Nighthawks (3) came through as they both whinnied and trilled!  A White-winged Dove (4) tuned up in the distance, and of course the cacophony of Great-tailed Grackles (5) on the wires along Business 83 could be heard even through the car windows!


Arrived at Bentsen an hour before dawn as planned, but was concerned about how the wind might affect hearing any night birds.  Thankfully the Pauraques (6) were not only vocal, but even allowed looks as their red eyes reflected in my flashlight, and one even wafted by silently, with just enough light from the moon to illuminate his white wing patches!  At the resting bench a Common Gallinule (7) cackled from the hidden resaca, and both Brown-crested Flycatchers (8) and Couch’s Kingbirds (9) started tuning up.  Heard the barking of the Elf Owls (10) as I neared the resaca, but hadn’t heard any Screech Owls yet, so I went onto the Kiskadee Trail for a bit to listen; just picked up Mourning Dove (11), Cardinal (12), and thankfully a Great Horned Owl (13), but no Screech L.  Heading over to my regular spot overlooking the resaca, a Beardless Tyrannulet (14) was belting out his dawn song, and as the morning gradually broke added Kiskadee (15) and  Red-winged Blackbird (16) to the list.  Swarms of swallows wheeled over the resaca, but in the poor light the only ones I could positively ID were Barn (17) and Rough-winged (18).  A White-faced Ibis (19) flew by, and one of the swallows proved to be a Bank (20) with his rapid-fire chattering.  More early-morning songsters started up, including Olive Sparrow (21), Altamira Oriole (22), and Golden-fronted Woodpecker (23).  Started back at dawn, adding a Mockingbird (24) to the list, but was very glad to get the Mississippi Kite (25) flying overhead!  Between the Resaca and the canal added Hooded Oriole (26), Ladder-backed Woodpecker (27), Long-billed Thrasher (28), Verdin (29), Chimney Swift (30), Black-crested Titmouse (31), the morning chorus of Chachalacas (32), a flyover Dickcissel (33), Green Jay (34), White-eyed Vireo (35), and a single Tennessee Warbler (36) that came out to pishing.  A Clay-colored Thrush (37) gave its mournful song as I headed out of the woods, and Cave Swallows (38) were flying around the canal, along with the Black Phoebe pair (39).  A Buff-bellied Hummingbird (40) was chattering around the garden, and an Inca Dove (41) flushed just before getting to the parking lot. 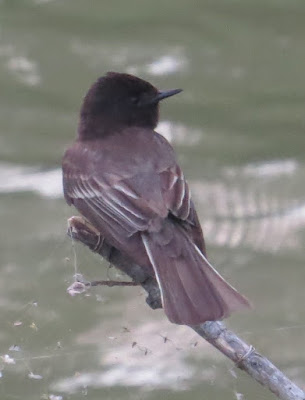 
Heading down Old Military Highway, I stopped and backed up for a bird that was feeding on the grass, which turned out to be a Curve-billed Thrasher (42)!  Heard an Eastern Meadowlark (43) on the way to my first stop where the Butterfly Center’s Walking Trail terminates at the road.  Heard a Yellowthroat (44) in the brush, and a Bronzed Cowbird (45) was on the wire, but I was pleased to get the Blue Grosbeak (46) in the same spot I had him last year!  What was an even bigger surprise was a group of Eastern Bluebirds (47) that should be long gone by now, and when they finally got into a position where I wasn't looking at them against the sun, they turned out to be spotty babies!  Later I would find out that someone actually put up a nest box in the Butterfly Center, and the wintering bluebirds apparently decided to stay and raise a family! 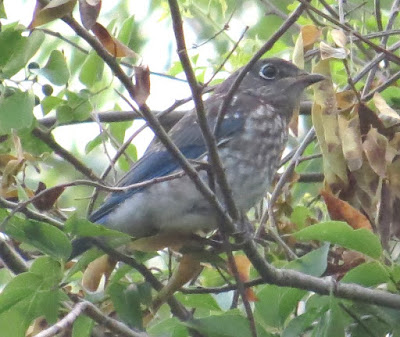 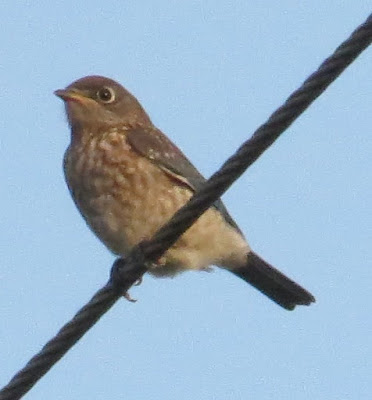 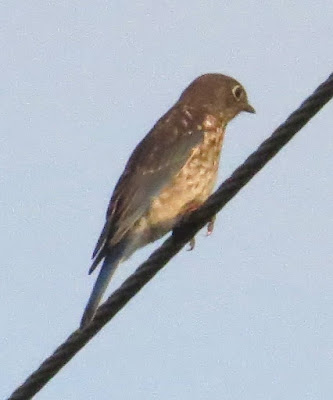 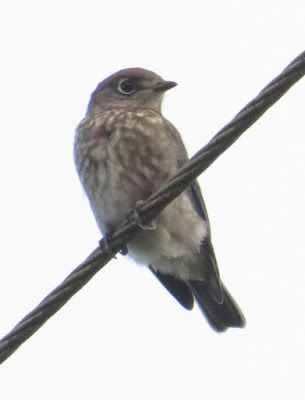 Continuing onto the levee, added Lesser Goldfinch (48), Cattle Egret (49), Black-bellied Whistling Duck (50) and Groove-billed Ani (51) calling from the thornscrub!  A Swainson’s Hawk (52) soared overhead as well, and once at Chimney Park and the more “urban” part of the levee added three of the four “Euro-trash” birds (Rock Pigeon – 53, House Sparrow – 54, and European Starling – 55).  Cutting down to FM 494 a Lark Sparrow (56) was singing in the field.


Picked up Loggerhead Shrike (57) on a wire along the entrance road to Anzalduas, and a Least Grebe (58) in the spillway.  A few Coots (59) were still in the river, and a Mottled Duck (60) was on a little platform in said river.  A Turkey Vulture (61) sailed overhead along with a Laughing Gull (62), and Killdeer (63) were in the grass near the dam.  A few lingering Lesser Scaup (64) were in the same area, along with a pair of feral Muscovy Ducks (65), although the one had all the characteristics of a wild bird!  Neotropic Cormorants (66) were behind the dam, and picked up the nesting Cliff Swallows (76) on the dam!  Heard a Bobwhite (68) calling from the fields on the way out, and while going through Granjeno with the window open I couldn’t believe it:  a Common Nighthawk (69) was batting around and beenting! 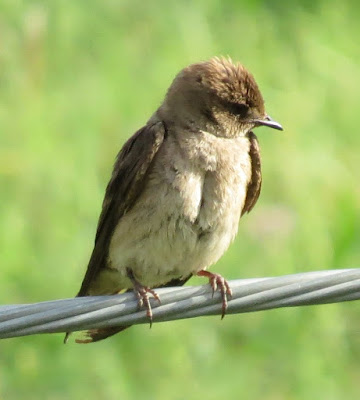 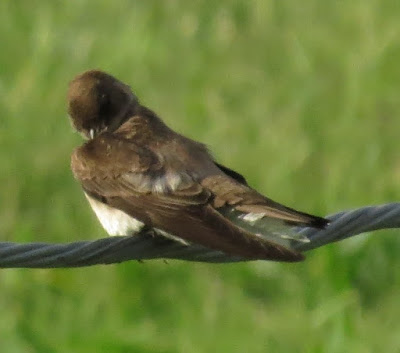 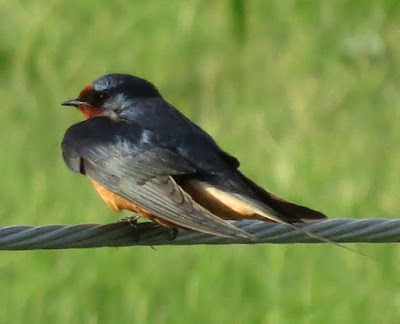 
The next destination was Quinta Mazatlan, where the next bird was an uninspiring Brown-headed Cowbird (70), but the woodlands produced some nice migrants, including a pretty male American Redstart (71) and a female Scarlet Tanager (72), which I was very pleased to get for the year!  Baltimore Oriole (73) also got added, and at the dragonfly pond a lingering Lincoln’s Sparrow (74) was skulking near the fence.  Heard a Yellow-billed Cuckoo (75) give its cou cou cou call on the way out.


Picked up the last of the “Euro-trash” (Eurasian Collared Dove – 76) on the way up to Brushline Road and the La Sal del Rey Route, adding the expected “open country” and “desert thornscrub” stuff:  Common Ground Dove (77), Painted Bunting (78), Caracara (79), Scissor-tailed Flycatcher (80), Harris’ Hawk (81), Roadrunner (82), Bewick’s Wren (83), Pyrrhuloxia (84), Bullock’s Oriole (85), Cactus Wren (86), and Cassin’s Sparrow (87).  Was very pleased to bag Black-throated Sparrow (88), as this is really on the edge of their range here!  Up at the farm pond added the Stilt Sandpiper (89) right away, but a pleasant surprise was a pair of mating Least Terns (90), new for my La Sal del Rey list!  Also added the more expected Least Sandpiper (91) and Black-necked Stilt (92) to the list, plus our Baird’s Sandpiper (93) and Snowy Egret (94) from our last visit here with the Dutch folks.  Heading down Ken Baker added Black Vulture (95), but am sorry to say I dipped on the White-tailed Hawk… L 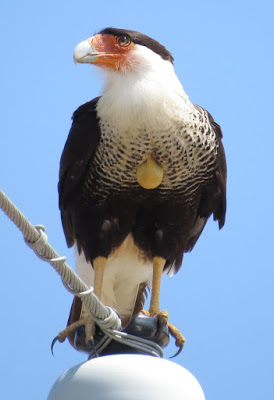 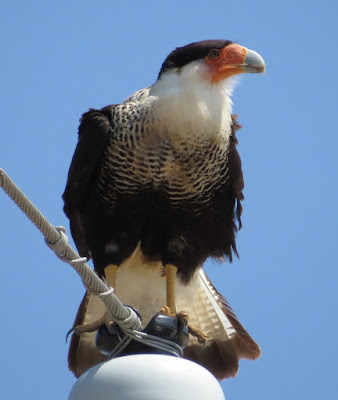 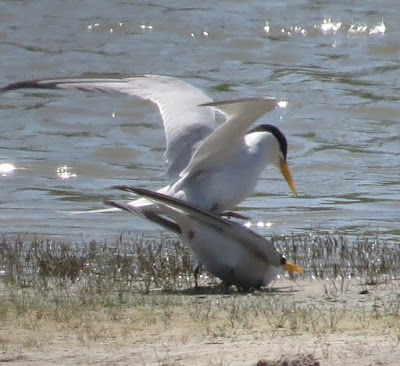 
Made a quick stop at the “FM 1015 Pond” directly east of Delta Lake, as you never know what’s gonna show up there; this time just added Blue-winged Teal (95), which I got elsewhere, but the Gadwall (97) was unique for the day, so it was worth the stop!


I had made arrangements with Javier Jimenez the day before to include Valley Acres Reservoir this time around in lieu of Delta Lake (as the latter had nothing I didn’t get elsewhere last year), and that was a great switch, as I had several birds there that I logged nowhere else!  With permission, you can drive all around the reservoir, and good birds often hang out in the lake’s central island, so in addition to the Horned Lark (98) added on the way in, a Greater Yellowlegs (99) was first on the list, and White Pelican had the honor of being bird #100 this time around!  Before even starting the trek around the lake added Roseate Spoonbill (101), Gull-billed Tern (102; Least Terns were at this location as well), a pair of pink Franklin’s Gulls (103), and a group of Long-billed Dowitchers (104) to the list!  Spooked a White-tailed Kite (105) at the Boy Scout camp, and both Green Heron (106) and Black-crowned Night Heron (107) going past the tamarisks.  Just before the exit I took another look at the lineup out on the spit (which was mostly pelicans and cormorants), and noticed that some cormorants were noticeably bigger than the others, so I could safely add Double-crested Cormorant (108) to the list, along with a Great Egret (109) that was closer by. 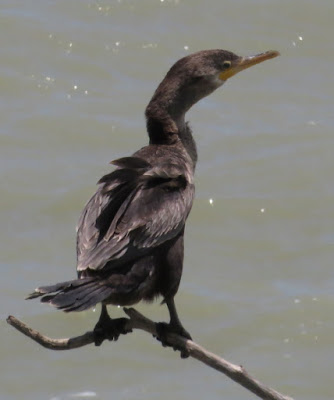 Lineup of White Pelicans and both types of cormorants

Frontera Thicket was next, in hopes of some migrants, but got much more than that; an Eastern Wood Pewee (110) was nice, but had I not been looking up I would have missed the pair of Yellow-crowned Night Herons (111) up in the trees!  The Green Kingfisher (112) ticked and splatted from the pond, and added Northern Parula (113) and Warbling Vireo (114) in the feeder area.  A Yellow Warbler (115) was near the front water feature, and just as I was heading back to the car some Green Parakeets (116) screeched overhead! 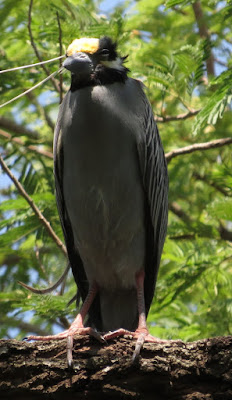 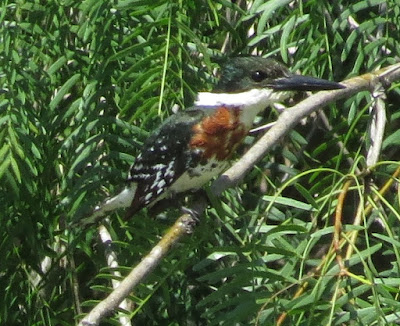 Off to Estero Llano Grande State Park, which provided a mess of shorebirds in Ibis Pond!  The afternoon light was great, so had wonderful looks at Wilson’s Phalarope (117), Pectoral Sandpiper (118), and White-rumped Sandpiper (119).  A Sora (120) called, and the truly spotted Spotted Sandpiper (221) wheeled in!  Circling back to the Tropical Zone, added a singing Carolina Wren (122), a Catbird (123) at the drip, and on the way out the McCall’s Screech Owl (124) was thankfully in his box, as they hadn’t come through for me at Bentsen!  A little excitement was had as this huge tree had fallen over and blocked the entrance after my arrival, so the crews were there chopping it up, and Ranger Javier was there directing foot traffic and giving a hand where needed! 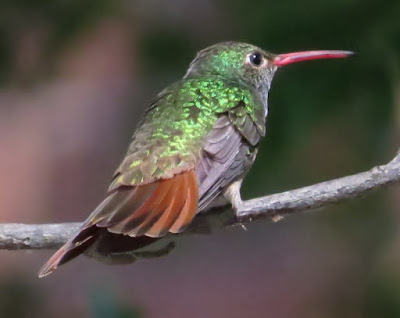 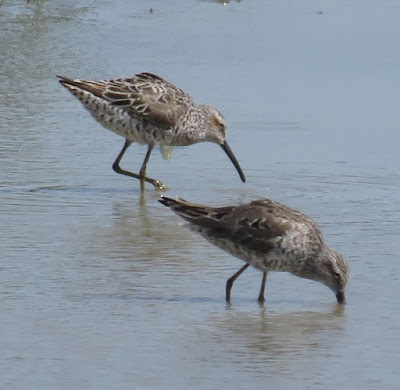 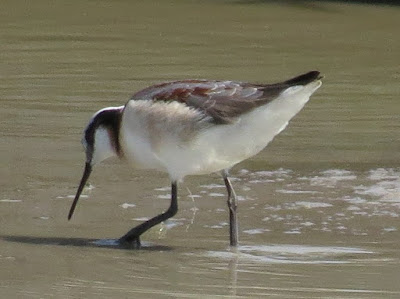 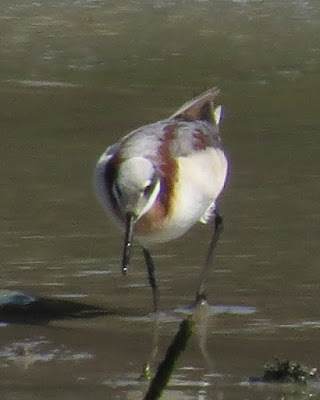 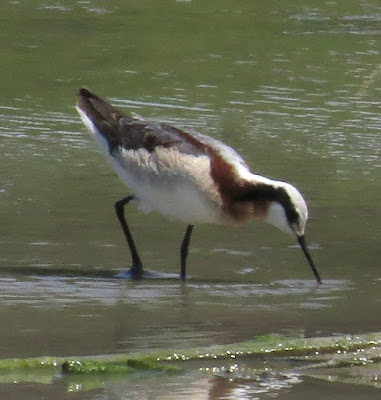 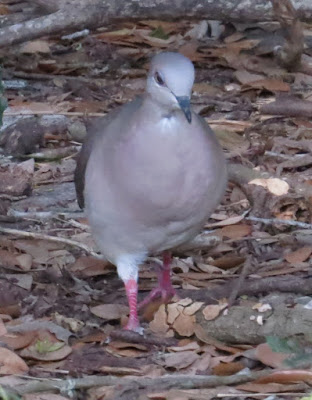 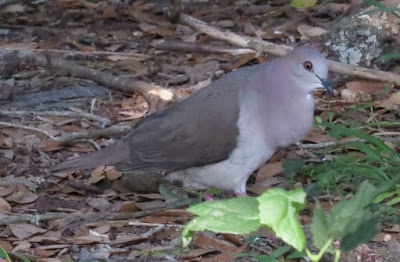 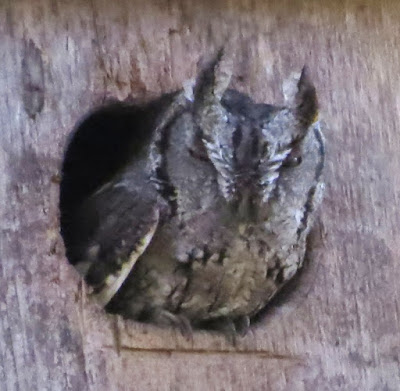 The Progresso Sod Farms were disappointing, only because stuff was way out there and the wind was horrendous, so the only thing I could see well enough to positively ID was a Lesser Yellowlegs (125).  So headed on to Santa Ana NWR, which turned out to be much more productive than last year, adding Black-throated Green Warbler (126) in the migrant department, and Tropical Kingbird (127) in the non-migrant department!  Willow Lake was housing a bunch of stuff; new birds included Tricolored Heron (128) and a lingering male Cinnamon Teal (129) and Shoveler (130).  I thought that was it for the day, but when comparing my BirdBase list (entered from a pre-printed checklist that reminds me of what I saw each day) to the written list, I discovered I had forgotten to jot down the White-tipped Doves (131) singing at Bentsen (and later coming to the drip at Estero)! 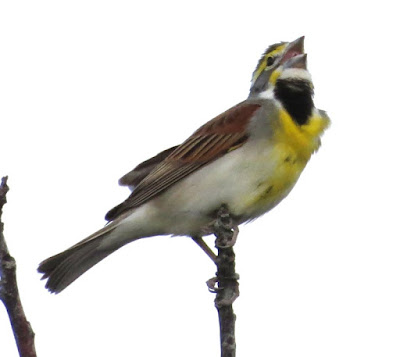 Dickcissel at the Progresso Sod Farms 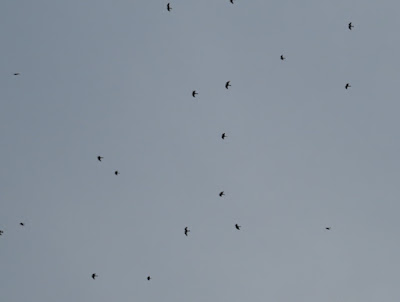 Just a few of the hordes of Mississippi Kites sailing over at Santa Ana! 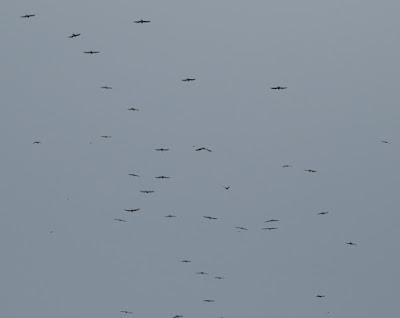 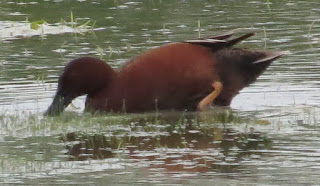 A lingering Cinnamon Teal was flagged by eBird!