Today’s half day was sort of a “clean-up” day for the girls, but as we discussed options on Wednesday, they mentioned that they had missed the Tropical Parula at Santa Ana when they visited on Monday (the fact that it was pouring rain probably didn’t help L), so since that was close, we chose to go there first.  Almost immediately along the Chachalaca Trail we heard a Clay-colored Thrush giving its querulous call, and before long he had displaced a Couch’s Kingbird in a dead tree right over the trail!  In the course of conversation it was revealed that the Beardless Tyrannulet was another target, and we hadn’t gone very far beyond the thrush before we heard a distant one, which I didn’t hold out much hope of finding.  But before long it came closer and closer, until it was right next to us on the trail!  I sent Barbara on ahead (as she would probably spot the thing before I did J), and she caught it as it darted out of the tree and across the trail!  When it called again distantly I said, “That was definitely it!” giving her an excuse to do a Happy Dance – that was good enough for her! J 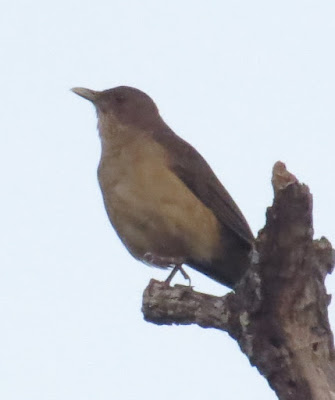 I pointed out the Olive Sparrows’ bouncy-ball song (similar to their Field Sparrows in the Hill Country, she observed), and an oriole shot through and landed, proving himself to be an Altamira, another target!  At the first Willow Lake overlook we padded the list with a few Shovelers, Blue-winged Teal, and dowitchers, plus a single Great Egret and Harris’ Hawk, then continued on the connector trail to the Willow Lakes Trail and hung a left, passing by the culvert where we added a trilling Least Grebe, some Gadwall, a Neotropic Cormorant, and Black-necked Stilts to the list.  We continued on, planning on backtracking if I hadn’t heard the parula by the time we got to the wooden deck, but thankfully we heard the buzzy trill in the distance, and before long Barbara was able to spot the little guy singing his heart out in a Spanish Moss-laden mesquite!  Everyone got great looks (although this wasn’t a lifer for Barb – she had gotten hers in Refugio)! 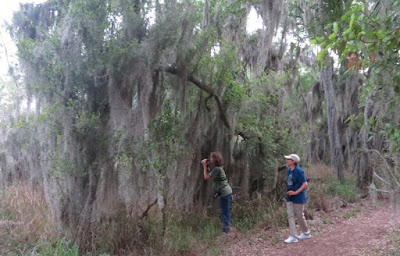 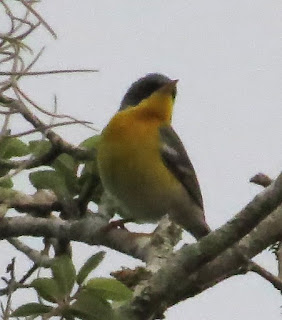 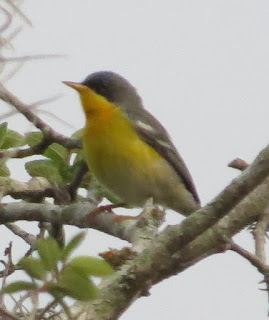 At that point we decided to do the whole loop and make a morning out of it, as it was overcast and windy (not the greatest butterfly weather, as we were initially gonna nab the parula and then go straight to the National Butterfly Center for butters and the Altamira, which we had just gotten anyway), so we continued on to the deck, where we enjoyed two Little Blue Herons, some fly-in Black-bellied Whistling Ducks, a Tropical Kingbird, and a female Orchard Oriole.  I then gave them a choice of taking South Pintail (to see the Rio Grande) or cut down to North Pintail (to watch the skies for raptors), and Joyce voted for North Pintail, but in the meantime Barbara asked about Anzalduas, and I said that if you wanted an easy way to see the Rio Grande, that was the place to go!  The girls were game, as Barbara especially had heard so much about the place and wanted to see it (and we were all thinking more about the restroom than anything else at that point), so we headed straight back to the Visitor’s Center, and while I checked us in Barbara waited for the Buff-bellied Hummingbird to return to the feeder for a picture (which he never did L). 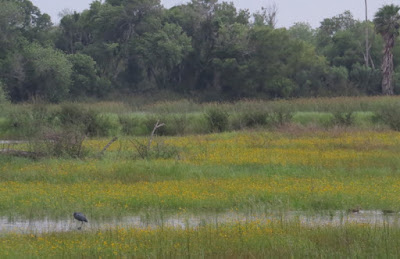 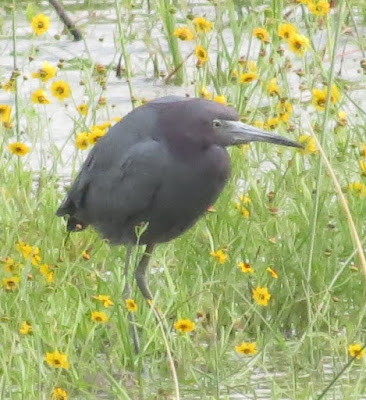 Close-up of the Little Blue Heron in the above shot 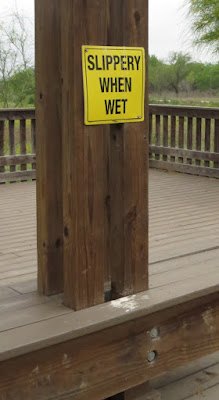 I don't think that's what they had in mind...


We went the back way to the park, picking up a Pied-billed Grebe in the spillway on the way in, and while I figured the Sprague’s Pipits were probably gone by now, it was worth taking a shot, so we did the last Pipit Poke of the season, scaring up only Savannah Sparrows and hearing only Eastern Meadowlarks.  A couple of Coots were the only water birds (a flyover Bank Swallow was nice), so we returned to the car where we heard a Hooded Oriole calling from the palms.  We started crawling (in the car), spotting an Osprey on a stump in the river eating breakfast, and a couple of Laughing Gulls and Forster’s Terns were new for Barbara’s Hidalgo County list!  She also spotted our resident Black Phoebes on the chain link fence by the boat ramp, and a Ringed Kingfisher gave a brief view as he shot upriver close to the bank!  Both Couch’s and Tropical Kingbirds posed for pictures, along with a Scissor-tailed Flycatcher on the back end.  We enjoyed the Cliff Swallows going in and out of their nests on the dam, and Barbara spotted her Lesser Scaup for the county nearby!  Paralleling the levee, a smaller bird on the wire rope turned out to be a lingering Eastern Bluebird, and a slow chattering got us out of the car to chase down an uncooperative Bullock’s Oriole…  An odd raptor turned out to be a Black Vulture dangling his legs, and a Lark Sparrow not only showed off his pattern but his snorting song as well!  Checking out the “middle road” gave us another great look at the Altamira Oriole as he performed acrobatics to feed! 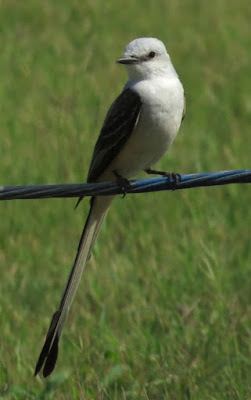 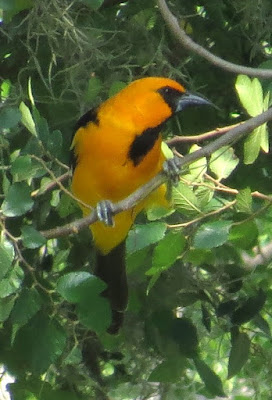 We had a few minutes to spare before we had to head back, so since I had mentioned the Monk Parakeets in Hidalgo, we swung by there (where Barbara spotted a Swainson’s Hawk coming off the 115), and I was a little nervous because the one and only time I took “guidees” there and we didn’t see them was on a horribly windy day!  But fortunately this time we did see several working on their nests, and the girls got great looks and pictures! 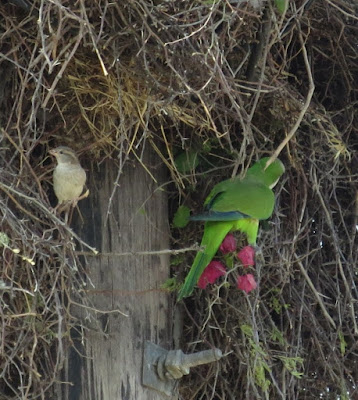 Monk Parakeet shares his apartment complex with a pair of House Sparrows (female above, male below) 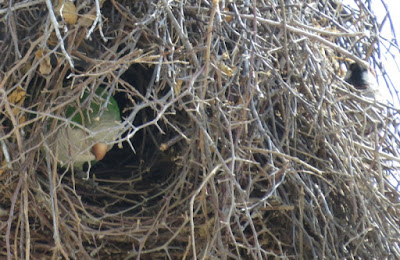 We called it a day and took the back way to Alamo, surprisingly picking up a pair of Tricolored Herons flying over the road when we entered town!  That made it a respectable 73 species – not bad for a blustery half day!  Bird List: