Off the Beaten Track

Don and Dorca were from New Brunswick, and they were interested in seeing “out of the way” places, as they planned on visiting the well-known parks on their own.  I though the La Sal Del Rey area would be a good choice, as I often get a variety of birds along that route.  We went straight to Brushline Road, to the area north of SR 186, where many birds came right out:  a Brown-crested Flycatcher showed nicely, as did a Long-billed Thrasher, Olive Sparrow, Pyrrhuloxia, Bewick’s Wren, and a friendly Curve-billed Thrasher up on a wire!  A Cassin’s Sparrow sang on a bush for scope views, Scissor-tailed Flycatchers posed on the wires, and a big surprise was a flock of Cedar Waxwings down the road!  An even bigger surprise was a big flock of Lark Buntings, when they should have been long gone by now! 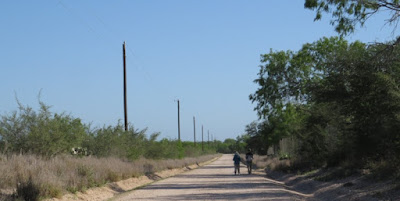 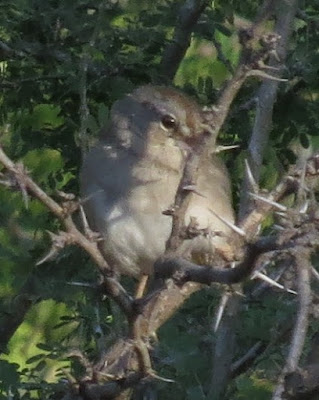 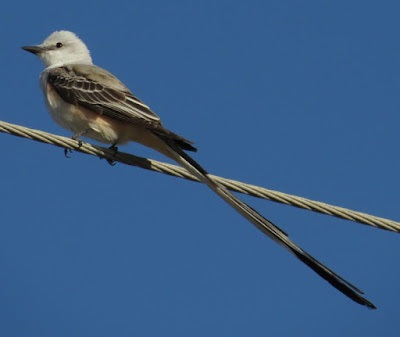 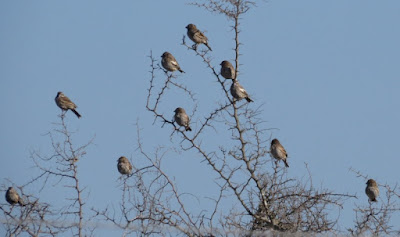 Small part of a large flock of Lark Buntings! 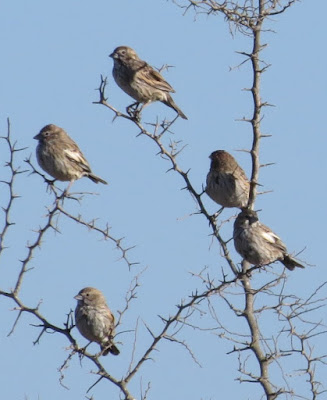 Here the tell-tale buffy wing patch is evident on these birds. 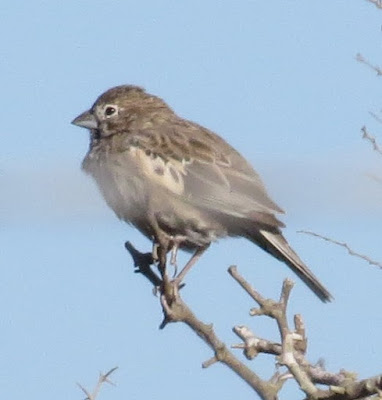 Close-up of one of the birds (with an inconvenient fence wire through the middle...) 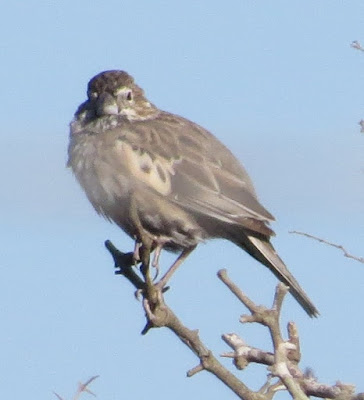 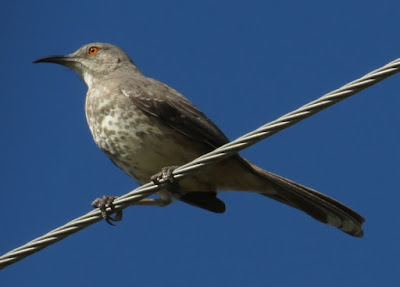 
The pond at the end of Brushline had some interesting birds to pad the list, including American Wigeon, Black-necked Stilts, Cattle Egrets grazing with the horses, and an Emu!  (He didn’t go on eBird… J)  Backtracking, a pair of Harris’ Hawks posed on a pole, and Don got to see his Roadrunner!  (I missed that one, but heard one later…)  Because of the angle of the sun, I opted to blast down to SR 186 and head east to Rio Beef, come up that road, and go west on Ken Baker so the sun would be to our backs, but on the way we nearly went in the ditch stopping to enjoy a tom Turkey “in the strut”!  Continuing to Ken Baker, I was sweating the White-tailed Hawk until one finally gave us a good view!

An Emu seems out of place with horses and Cattle Egrets (at least in North America)! 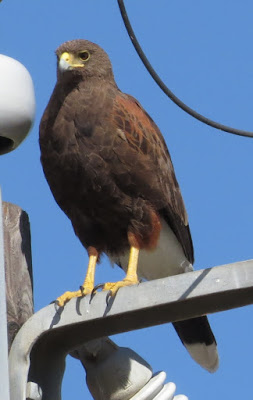 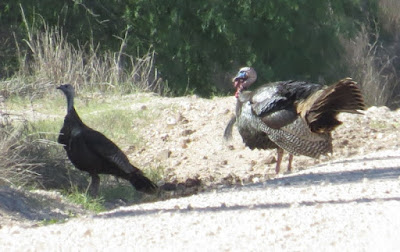 We stumble upon a tom Turkey trying to impress a hen! 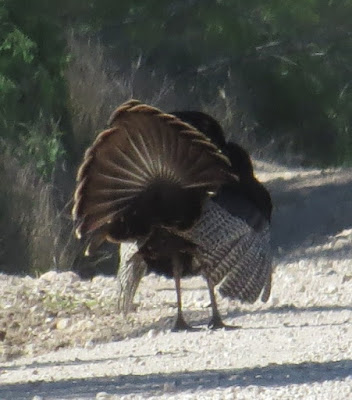 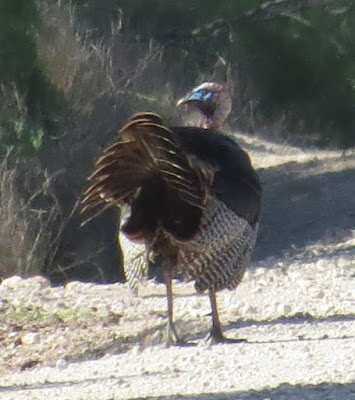 "She's not even looking!" 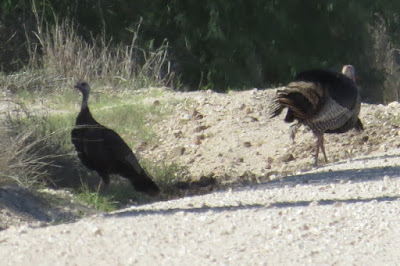 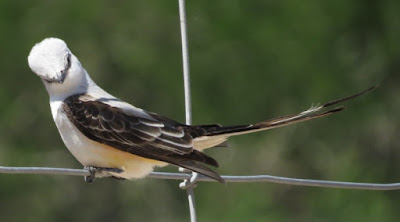 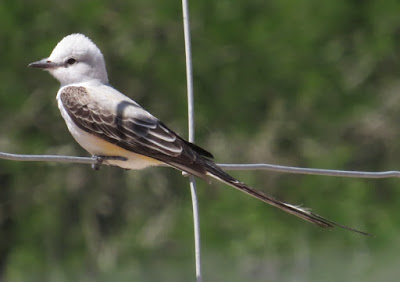 Delta Lake was too high for shorebirds, so we swung in the park mainly to use the restrooms, but birdwise it was pretty much a bust except for Cave Swallows swirling around the little bridge and a Green Heron in the same area.  Conversely, the “Back Pond” along FM 1015 was great with Fulvous Whistling Ducks and others water birds!  Sugarhouse Pond had the proverbial “zilch, zero, nada,” but after that disappointment that “still small voice” suggested I give Javier over at Valley Acres Reservoir a call, and he gave the go-ahead to come on in and bird!  (This is a restricted area, but so long as you call Javier and ask, they usually don’t have a problem with birders coming on the property…)  That was a great decision:  tons of White Pelicans, Franklin’s Gulls, and shorebirds graced us (including Baird’s Sandpiper)!  A gorgeous Roseate Spoonbill was a hit, too, and a nice surprise was an American Golden Plover!  The “back leg” had a line of tamarisks that were hiding tons of Black-crowned Night Herons, which took off one by one as we passed! 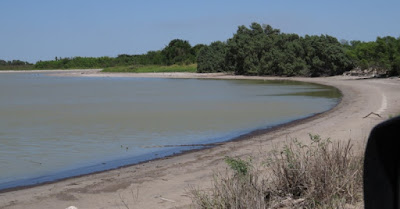 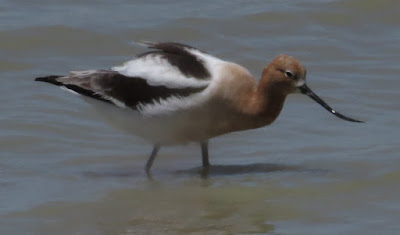 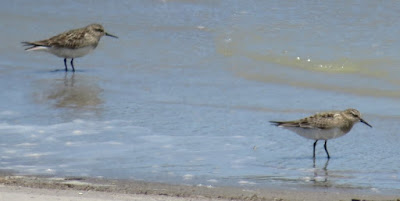 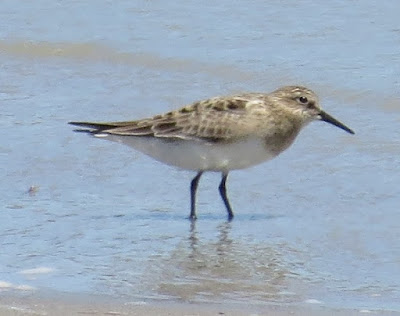 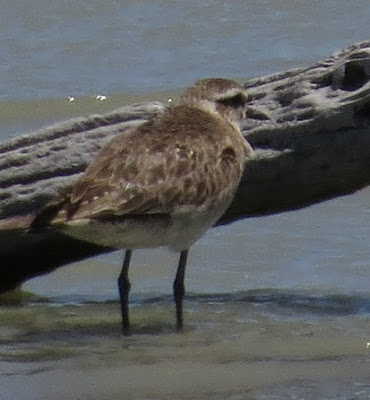 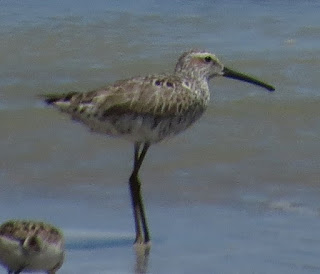 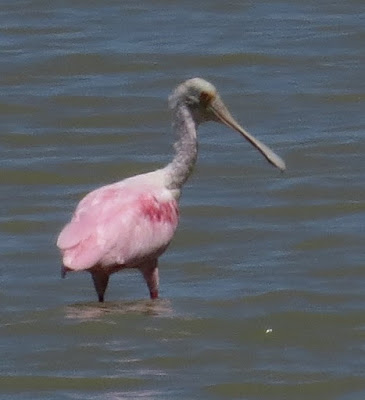 
Our last stop was the Progresso Sod Farms, where we found several Upland Sandpipers and a few more Golden Plovers, along with some nice Swainson’s Hawks.  Discovered to my chagrin that you can no longer drive up on the levee to access Pomelo Road to the east, but thankfully you can at least drive the road the parallels the levee to get there!  There was simply a “No Trespassing” sign that was enough to deter me, but I’m glad I didn’t cave to temptation and get up there anyway, as we saw a huge block of concrete crossing the old access road down to Pomelo!!


Headed home after that, with 91 species for the day!  Bird list: