Met Josh, an enthusiastic young birder from Massachusetts, at the airport after he dropped off his rental car, and we were off through the fog, heading to Cameron County!  He had flown in the day before and had gotten a slew of life birds at Estero Llano Grande SP on his own (this was his first time to Texas), so he was off to a good start!  As we discussed the route for the day, he happened to ask if King Rail was a possibility, and his timing couldn’t have been better as we were two exits short of Kansas City Road, the exit for Tiocano Lake!  So we wheeled off and over to this often very productive little wetland, logging a pair of White-tailed Kites on the way in!


We crawled along the road until we found a somewhat safe pullout, and it didn’t take long before we heard a distant King Rail “clapping”, then one closer, and eventually we heard one so close that you could hear the “throaty” sound of the clap!  Both Neotropic and Double-crested Cormorants flew over together, so that was handy to see the size difference!  A Least Bittern let loose with its cackle, which Josh had never heard before!  A Sora whinnied, a young Cooper’s Hawk sailed in, and Swamp and Lincoln’s Sparrows called, but down near the north end an odd sound turned out to be a Sedge Wren at our feet (that actually sat up for pictures)!  We couldn’t believe it!  The Marsh Wren calling back at the car was definitely anticlimactic! 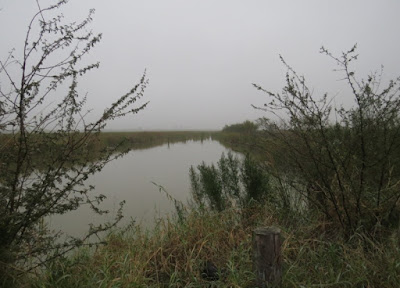 A foggy view of part of Tiocano Lake 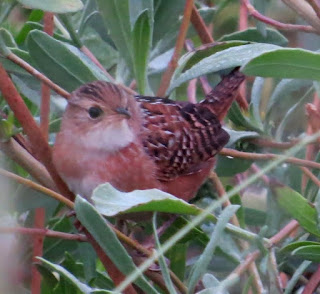 ...and we get a cooperative (and cute) little Sedge Wren instead! 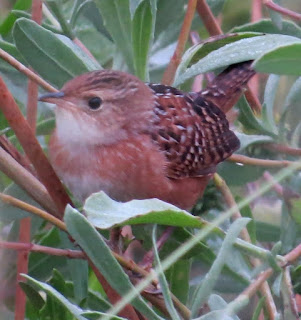 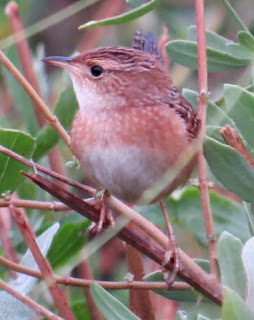 From there we headed straight out to SR 100 towards South Padre Island, seeing as the Tamaulipas Crow hanging there had been seen recently, so we wanted to try that location first.  We stopped at the traditional “falcon stops” along 100 with no success, but we had plenty of other raptors:  lots of White-tailed and Harris’ Hawks, Kestrels, Ospreys, and even a Red-tailed Hawk!  The Island was socked in, and no crow was along the main drag that we could see, but we poked out onto the Flats anyway and had nice looks at the usual suspects through the haze; unfortunately Josh’s two targets (Snowy Plover and Sandwich Tern) were nowhere to be seen, although I was happy with the cute little Piping Plover (almost a yawn where he comes from J), and a Reddish Egret making a grand entrance was his first in 20 years, so that was exciting!  A Franklin’s Gull had been reported, which would also have been a lifer, but we just couldn’t pick one out.

Josh shoots some skimmers (below) through the haze 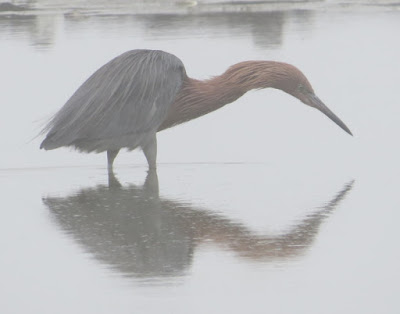 Reddish Egret in the fog


Rather than spend more time on the Island we opted to head towards Old Port Isabel Road (OPIR), but I thought we might have a chance at the Snowy at Port Isabel Reservoir, so we headed up that way.  On the way Josh saw a raft of ducks in the bay, and again, his timing of the mention was perfect, as we had just reached the turnoff for the Bejarano-McFarland Memorial County Park in Laguna Heights where you can walk out onto a little overlook into the bay!  Sure enough, there was a nice raft of Redheads (along with one Gadwall and a couple of Coots), and we also added Little Blue Heron to the list here.  He was just astounded with the sheer number of birds he was seeing down here! 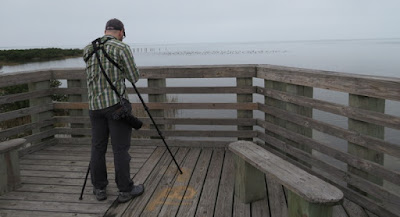 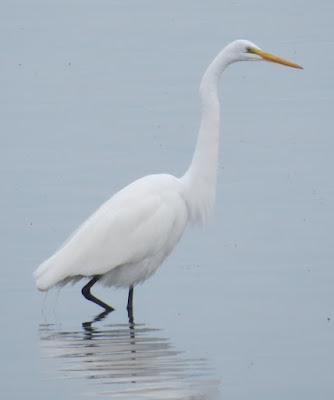 
We finally made it to the reservoir, and by this time the fog was starting to lift and the light there was great, so we were treated to a great show of Shovelers, Pintail, Green-winged Teal, stilts and avocets, Stilt and Western Sandpipers, and Long-billed Dowitchers.  But in the process of scanning Josh spotted yet another surprise lifer:  a Gull-billed Tern sitting on a post like a pillow!  Back at the car Josh’s coveted Long-billed Curlews suddenly put in an appearance by crying and flying all around!


After wrapping that up we saw a kettle of vultures along Holly Beach Road, so since a Zone-tailed Hawk had been reported repeatedly in the area, we decided to drive down and check them out.  Just Turkeys and Blackies, but we were also treated to a beautiful White Pelican Ballet in the sky!  Once we turned around and headed out, the dead Raccoon we passed had been discovered by a Caracara in addition to the vultures!


On the way out it dawned on me that the Dump closes around 3:30, so I made a command decision to return to Port Isabel and take SR 48 down to SR 511 and straight to the Dump.  There were good numbers of birds in the shrimp basin area, and Josh called out a pair of Oystercatchers that I just happened to get a glimpse of!  Once at our destination we wheeled in and checked in, and as I explained to him, I’m always a little concerned whenever I go there as “the pile” is always being moved around, and you never really know where you can drive and where you can’t (you’re just admonished to stay out of the “active area”).  This time there seemed to be only one road open, and it led directly into the “stuff”, so I parked off the main drag as best I could and we walked along the road, checking every grackle.  Josh happened to catch sight of an odd gull, and as it landed, I couldn’t believe it:  we had a Franklin’s!  He was thrilled to get that lifer, along with the Chihuahuan Ravens flying around and croaking!  At one point we walked over the ridge and saw some settling ponds that were just stuffed with gulls (and other things); best bird there actually was a pair of Roseate Spoonbills!  Try as we might, we couldn’t pick out a Lesser Blackback, but Josh was able to get wonderful pictures of an adult White-tailed Hawk (see his eBird report for that day: http://ebird.org/ebird/view/checklist/S41448013) working on a chicken bone (and that made a liar out of me, because I told him that I couldn’t recall ever seeing any adult Whitetails there)!  Caracaras of course were all over, along with Cattle Egrets and both flavors of vultures, and the Starlings were performing murmurations, but we just couldn’t pick out a crow.  Josh heard an odd sound that I said kinda sounded like a crane, and sure enough, he spotted the thing way up there; I could barely see it!  I was very glad to have his sharp eyes during the course of the day! 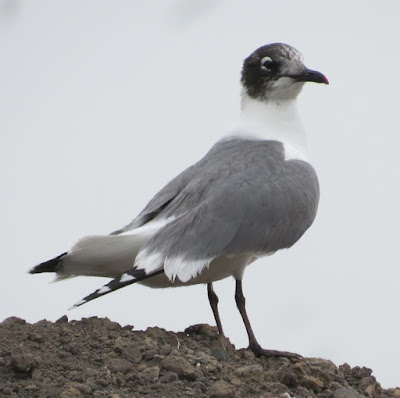 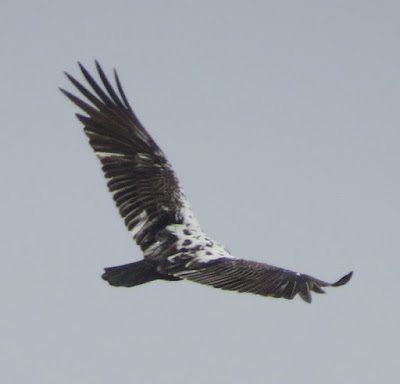 Leucistic Turkey Vulture (either that, or he was pooped on a lot...) 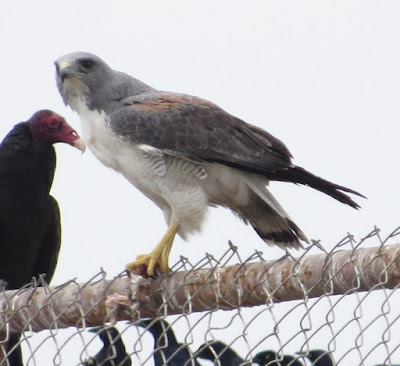 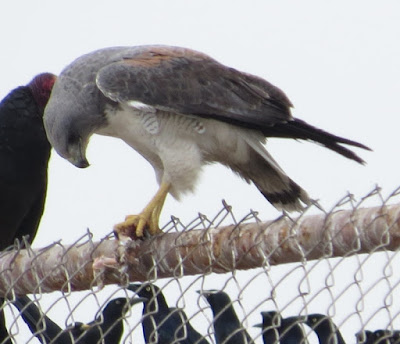 (with a lineup of grackles behind him...)

Since Boca Chica Boulevard was right there, we decided to just go in as far as Yolanda Road to check the falcon hacking platform, but there were no falcons to be had (although we had a nice Red-shouldered Hawk on the wire), so we headed on up to OPIR, where we again dipped on the falcon but had lots of Eastern Meadowlarks, Shrikes, and even another big group of curlews!  We even had another Sedge Wren calling at the “dicey spot”, and a Savannah Sparrow sat up pretty on an isolated bush.  At the canal we spooked up a couple of Spotted Sandpipers in addition to more ducks and herons, along with a few Lincoln’s Sparrows. 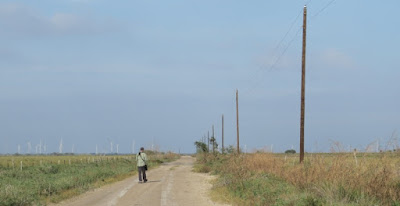 Checking for goodies along OPIR 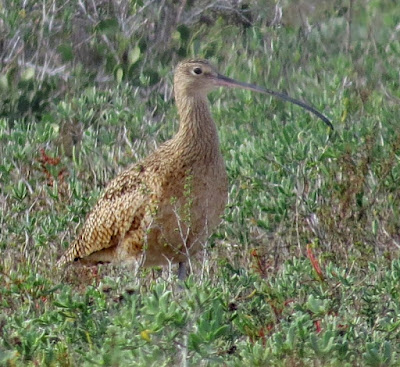 From there we had to head back, but with a respectable 97 species for the day (and Josh probably had some I didn’t)!  Bird list: