With a Red Flag Warning in the mix, we decided to make this day our scheduled “half day”, and spent the morning at Santa Ana NWR, as that was a place Bill and Sue really wanted to see.  Most everything was new, and since the sun hadn’t even come up yet by the time we left, we made a detour to the nearest convenience store and picked up some food and drink before hitting the refuge (and spotting a Striped Skunk in the process)!


It was actually quite calm and foggy when we first started out (and the sun coming up through the haze was beautiful), and while I took a potty break at the refuge Sue announced later that she got the first of two birds she really wanted to see:  the Green Jay!  A Kiskadee was hanging with a flock of Redwings in the parking lot, but I assured Bill that he’d get better looks later!  We headed up over the levee and into the woods, and we immediately ran into a feeding flock even before getting to the “roundabout”:  Orange-crowned Warblers, titmice, gnatcatchers, and kinglets were all in the mix, but they were most excited about the Nashville Warblers that also showed up!  A nice Ladder-backed Woodpecker perched behind us, and the Carolina Wrens had begun to vocalize, which they noticed sounded quite different from the ones they were used to in Pennsylvania!  We initially headed out towards Pintail Lakes, as that’s what the official bird walk had done the previous day to see the birds “before the wind picked up”, and came across a very cooperative Harris’ Hawk sitting off the trail!  But once we got out into the open the lakes were so socked in that we decided to skip it and head back into the woods (but not before adding a tooking Western Meadowlark)! 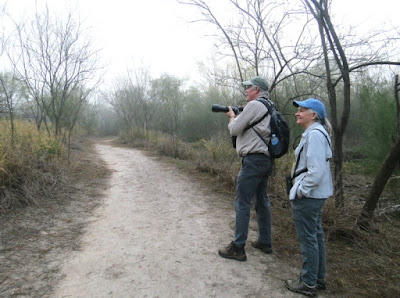 Bill and Sue enjoy a hazy Harris' Hawk (below) along the Pintail Lake Trail! 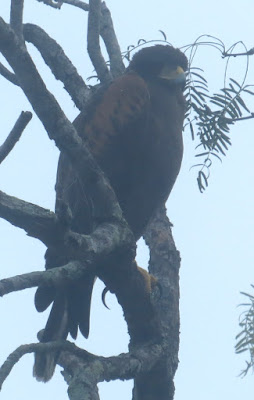 We came to the Tower area where the becard had been sighted, but once on the sidewalk Sue stopped me short:  there was a trio of Chachalacas right in front of us on a log!  They seemed unconcerned as we enjoyed them at close range, but what was even better was a “wren wannabe” shuffling around nearly at our feet, which turned out to be an Olive Sparrow!  Great looks! 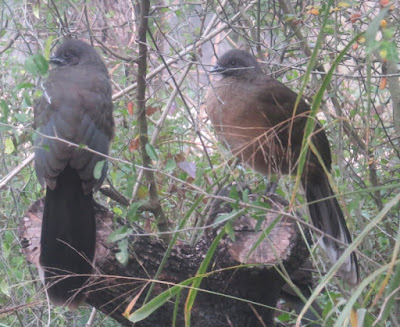 There was no sign of the becard, so at the trail intersection we looked at the map and I gave them the option of continuing on the Willow Lakes Trail which would get us closer to wetland habitat, and they readily agreed (Bill works in the area of “cleaning up wastewater”, so he’s very familiar with the practice of transforming sewer ponds into wetlands)!  At the overlook we had nice views of dowitchers, Greater Yellowlegs, various ducks, and a White-faced Ibis I was unsuccessfully trying to turn into a Glossy (although the Whiteface was new for them)!  While scrutinizing the ibis a pretty Cinnamon Teal floated into view!  We continued around, trying vainly to get a Long-billed Thrasher to come out, but ran into many more feeding flocks with the same players as before (one such flock had a Ruby-crowned Kinglet actually showing his ruby crown in all his glory!).  At one overlook where we were checking the ducks, a Mottled Duck came barreling in, which was another lifer for them!  A Snipe fed along the grasses, another pair of Harris’ Hawks were across the way, and we heard a Belted Kingfisher rattling occasionally, but scanned in vain for a Ringed. 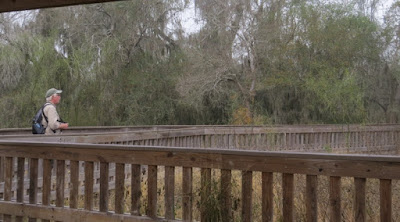 Bill on the new boardwalk

We finally made it to the viewing areas along the Chachalaca Trail, where in addition to adding Lesser Scaup and Ring-necked Duck, we also had both Least and Pied-billed Grebes.  But hearing the WheeK! of a Beardless Tyrannulet drove us onward, where we got sidetracked by a pair of “Mexican” Ducks out with the others, one showing broad white speculum borders, and the other showing what looked like a little “Northern” Mallard blood in him!  A Green Kingfisher gave its splat! call, but he was definitely in a position where he wasn’t visible… L  The tyrannulet sounded closer, but would then move down the trail, so we added Yellow-rumped Warblers along the way, and heard an Altamira Oriole that we chased down at the cutoff to Pintail Lakes, where it was down on the ground of all places and very upset!  We got great looks, but what was interesting were two Olive Sparrows that were also agitated and seemingly hanging around with the oriole! We continued on the trail where we ran into another feeding flock (and also trying to draw out a Verdin in the process), getting great looks at a Blue-headed Vireo, but what should finally pop into view but the tyrannulet!  He finally dropped down to where a tree was behind him and we could see his detail (although most of the time he sat against the sky), but what looks!  He showed off every field mark, which isn’t always the case with these guys!  High fives all around! 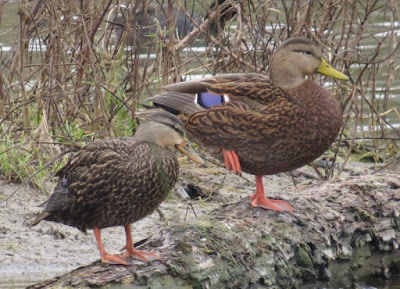 "Mexican" Duck (considered a race of the Mallard), best told from the Mottled by the broad white borders on the speculum. 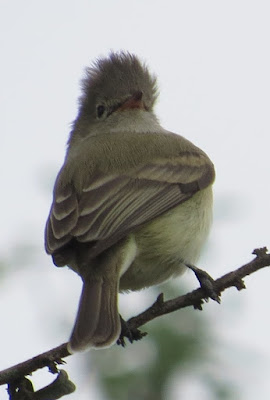 Northern Beardless Tyrannulet having a "bad hair day" above, and showing a more normal look below... 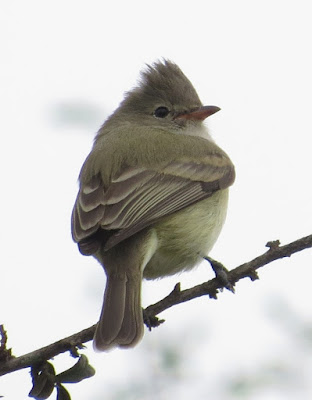 Since it was really too late to leave and go somewhere else, we decided just to casually finish the loop and wound up back at the roundabout, and eventually the visitor’s center, where Sue bought a souvenir T-shirt and Bill discovered the back feeders! J  I had asked Ranger Christine where this “staked out” Pauraque was, and she showed us the general area, but said that they don’t like to advertise it because people go back there and spook it… L  Apparently it had already been spooked (or else it was hiding really well), as we couldn’t find it…  So we went to view the feeders from the outside wall, adding Inca Doves to the list, before heading into the VC again and going over the eBird list (and adding White-tipped Doves out the window; somewhere in here Bill had snuck out to the other feeders along the walkway and photographed a Clay-colored Thrush, to Sue’s chagrin… J). 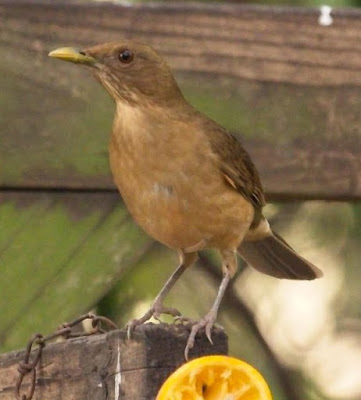 Headed home after that, giving them suggestions as to where to go that afternoon to stay out of the wind (we’re still under a Red Flag Warning as I write), with 56 species for the morning (picking up a couple of Caracaras in a field on the way)!  Bird List: