Since Friday was designated a “clean-up” day, and parrots were high on their list, we opted to start a little later so that we could include Oliviera Park (the only reliable parrot roost in the Valley) in Brownsville at sunset for the Parrot Show!  Fran still needed Sprague’s Pipit, so we headed back to Anzalduas first, and were just pulling up onto the levee when I heard a distant Ringed Kingfisher that shortly rowed up, circled a couple times, and landed right on the wire ahead of us!  He posed beautifully while we all got great shots (and he even stayed put as I snuck out and retrieved my camera out of the hatchback…)!  There were also about nine Great Egrets all lined up on either side of us, along with a couple of Snowies! 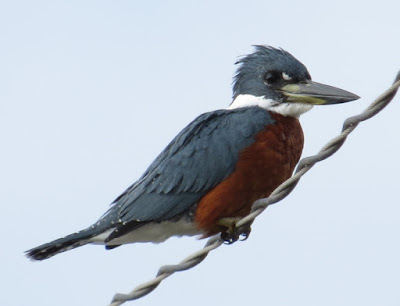 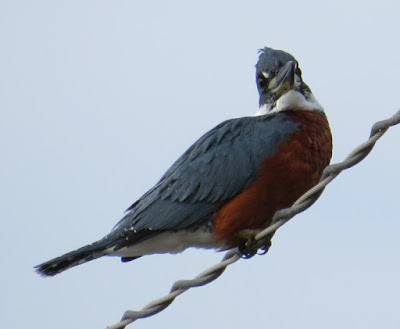 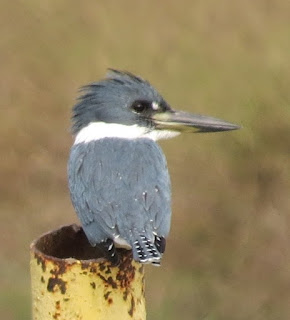 After he flew to a distant pipe

Once in the park, this time everyone made the trek, carefully avoiding the model plane a guy was flying (and subsequently crashed; Kathie mentioned that Dale would have been heartbroken, as flying model planes is a real passion of his)!  This time we had the Western Meadowlarks, and we didn’t have to go far before the Sprague’s popped up, piked quite nicely, and gave everyone a satisfying flight view.  We didn’t linger, as we had a lot of places to try and visit, so we headed straight back to Granjeño, but unfortunately dipped on the Burrowing Owl (we needed Dale’s eagle eyes for that one J).


Next stop was Hidalgo and the Monk Parakeets, and Kathie was awestruck with the nests!  Fortunately we didn’t have to circle around quite so much before the birds showed up, making that raucous call that differentiates them from the Greens.  There was also a Curve-billed Thrasher that sat right up in a bush behind us as if to say, “Hey!  Pay some attention to me, will ya?”  After pointing out Old Hidalgo Pumphouse as a possible site for them to visit on their own, we were off to Quinta Mazatlan. 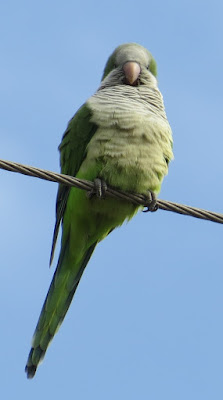 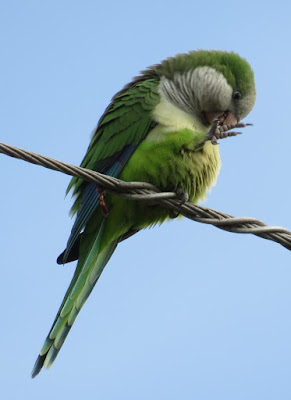 Chewing on his foot... 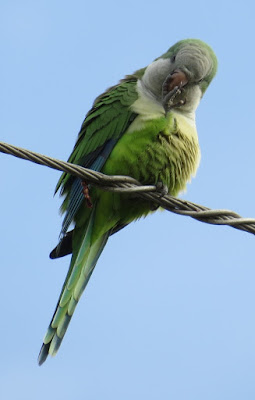 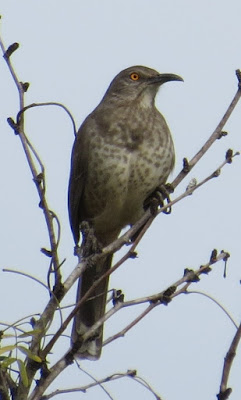 Everyone had restrooms on their mind, but it was quickly forgotten when the Clay-colored Thrush troupe started playing hard-to-get along the entrance road before coming right out into the open, gobbling down all those anacua berries!  Fran especially was entranced with the bird’s big red eye!  A Buff-bellied Hummer rattled at us as we went into the hacienda to check in, and the gal even had a map showing all the spots where the Blue Bunting had been seen!  After taking care of necessities we decided to check the area where it had last been seen, which was around the head of the little creek going into the Ebony Grove.  As we slowly poked around and listened, I heard an Orange-crowned Warbler, but then something called from the same area that definitely had a more metallic tone to it, and I was convinced we had the bird, but we just couldn’t get it to come out (which has been my experience – except in Belize…).  Shortly a young man came our way who said he had just seen it briefly before it took off, so I figured that was it, but the young man turned out to be Gabriel Rodriguez, who had posted about it several times on Facebook, so it was fun to put a face to a name!  Someone had seen Screech Owls in their boxes, so we checked those in the Ebony Grove to no avail.  We made the loop (as the bird had been found in several spots), but the only thing we added was a cute Black-and-white Warbler poking along the tree trunk, so after awhile decided to call it quits and head to the next spot. 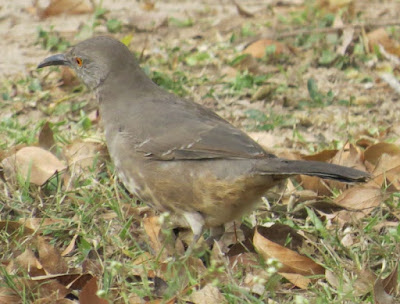 Another Curve-billed Thrasher in the parking lot 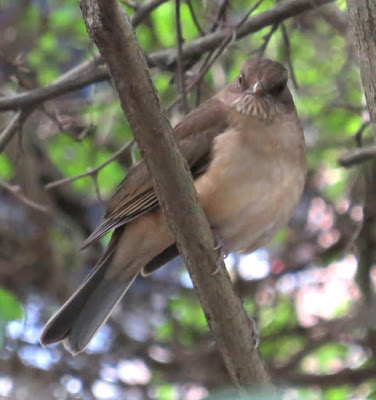 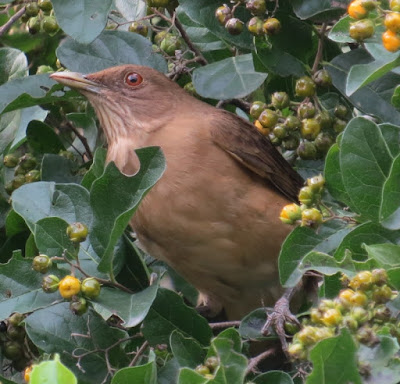 In good light you can see the red eye! 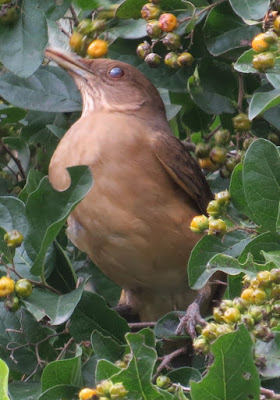 Here you can see the nictitating membrane flash across the eye! 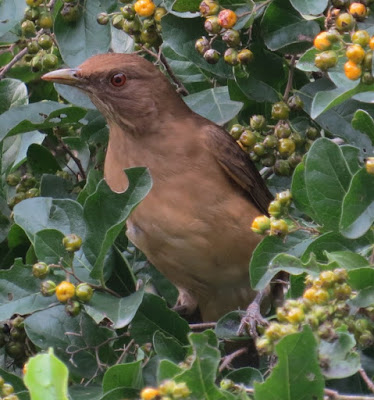 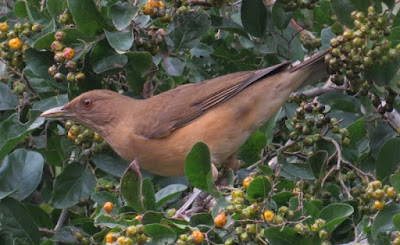 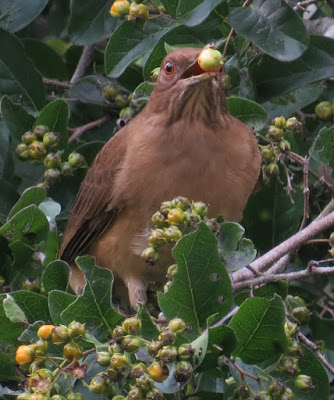 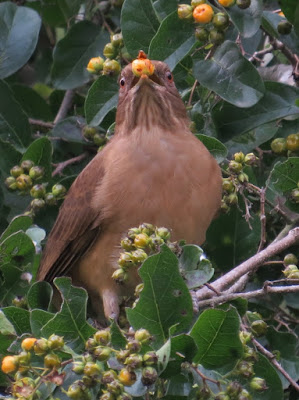 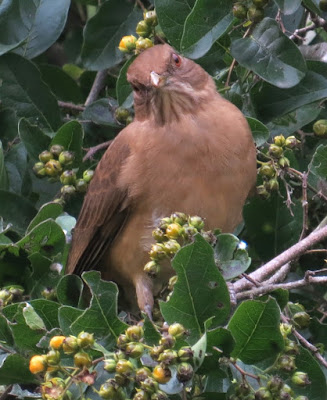 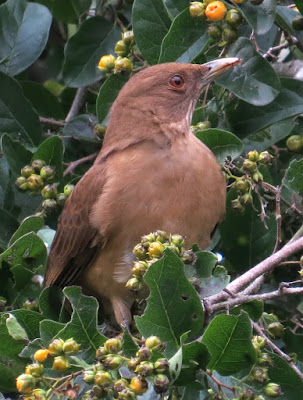 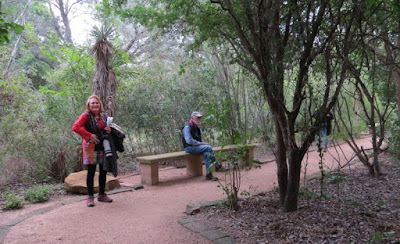 Kathie and Jim on the trail

I had scheduled the San Juan Wetlands for a shot at Swamp Sparrow, Stilt Sandpiper, and Long-billed Dowitcher, but considering the time I opted to head straight to Santa Ana, as they were also reporting the female Rose-throated Becard, plus we had a chance at the tyrannulet there.  We took the Chachalaca Trail to Willow Lakes and logged the usual ducks for the day, plus a small flock of Sandhill Cranes flying over, but way in the distance there were some shorebirds that included both flavors of yellowlegs and our coveted Long-billed Dowitchers!  Didn’t hear any tyrannulets along the trail, and the tower area had no becard (that we could find, anyway, but Elena had a ball climbing both the tower and the canopy walk J), so we headed on to Pintail Lake for a try at the sparrow and sandpiper.  Again, considering the time (and the hike; Jim had already abandoned us for the Visitor’s Center), we went straight and got a lovely view of what was in the closest lake – in particular, two Wilson’s Snipes at point blank!  Scanning the lake I came across what looked like a hybrid Cinnamon x Blue-winged Teal (mostly the former), plus a more pure-looking Cinnamon, along with the other expected ducks.  Not able to find any more shorebirds, we headed back, and as we approached the old tower parking area Fran and I heard some major shuffling in the leaves next to us, followed by an explosion of Bobwhite (nearly gave her a heart attack)!  After crossing the levee I spotted a gorgeous female Green Kingfisher right over the canal (which Fran really wanted to see)!  Jim reported that he saw lots of cool birds from the comfort of the VC as well, while enjoying their feeders! J 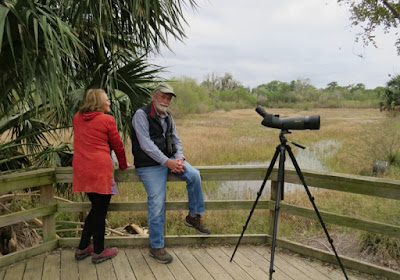 Kathie and Jim pause along the Chachalaca Trail 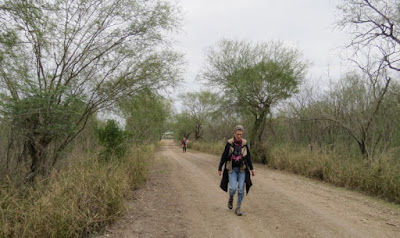 Fran on the Pintail Lakes Trail

Dan Jones had reported a couple of Fulvous Whistling Ducks in the Resaca in his back yard, so we made arrangements to head over there next, and after finally finding the place (“Google-Garman” let us down), Dan met us and escorted us back there, announcing that he had just found a yard bird:  a Virginia Rail had peeked out of the grass across the way!  A Sora was also with it, and they were both gone, of course, but Kathie was ready to die, as those were both birds she really wanted to see!  Alas, the Fulvous were also hiding, but the mob of Black-bellied Whistling Ducks was just incredible – even more of a mass than was at Harlingen Lake!  He also had a couple of White Pelicans loafing around, both night herons for the day, and both Ringed and Belted Kingfishers in the same scope view!  He agreed that if we wanted to hit the Parrot Show we needed to scoot, so after adding the feral Muscovies in his neighbor’s yard on the way out, we stopped for gas and then headed to Brownsville, picking up a pair of White-tailed Kites on the way! 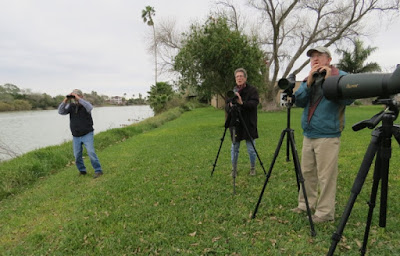 Jim, Fran, and Dan scan the opposite bank for Fulvous Whistling Ducks and rails!

“Google-Garman” got me turned around again on the way there L, but after going around the block we found the road we were supposed  to take, and made it to the park fine.  After explaining what I planned to do, we cruised the little road with the windows down until I heard some parrots, then parked and jumped out; almost immediately a pair of Yellow-headed Parrots started flying circles over us and giving their throaty Ralph! calls!  I could hear Redcrowns in the distance, but before anything else flew in a familiar voice addressed me from behind, and there was Mr. Parrot himself, Simon Kiacz, who was doing a study on the Valley’s parrot population!  He pointed out a pair of Red-lored Parrots on the wire, and said we missed the White-fronted Parrot show about an hour previously, but just as he said that a flock of said parrots wheeled in and landed, and we all got great views!  I was tempted to go chase the parrots I was hearing, but Simon assured us that they’d come in eventually, and sure enough, here came the Redcrowns, who blended in almost the minute they landed!  Simon found a Lilac-crowned in with them, but we could never get on it, as it disappeared within the foliage…


Before long it got too dark to really discern any field marks (and the parrots quieted down quite abruptly), so Fran and crew took off for a nice Brownsville steakhouse to celebrate while I headed on home!  Kathie mentioned that she and Dale had started a non-profit to help troubled kids beat their addictions (mostly through creative endeavors), that was borne from their own journey with one of their own kids, and she gave me permission to share their link: