Return of the Plovers

Everyone had been wondering when the Mountain Plovers were going to show up this winter, so I was thrilled to see an eBird report stating that Simon Kiacz had discovered some during the Laguna Atascosa CBC!  The planned itinerary for my “guidees” Frank and Margaret targeted Cameron County, as they were big county listers and needed to pad their lists, so the temptation of adding Mountain Plover was too much to resist!  So we headed over to General Brandt Road, as that’s where the initial eBird report said the birds were, stopping and listening occasionally (which was difficult as it was cold and windy), so we managed to pick up a few songbirds in the brush.  But that “still small voice” was telling me that I should probably text Simon to find out exactly where he had these things!  Glad I did, as the spot was way north of General Brandt, actually along East Fernando Road off FM 1847!  His coordinates placed us right next to a little cemetery, where we shortly started scanning the fields where a tractor was plowing and birds were following, including a couple of Gull-billed Terns!  We easily found some Killdeer, but after a little patience we finally zeroed in on some small, light brown bodies doing that famous “start-n-stop” motion – Mountain Plovers!  High fives all around!

We decided to go back and do the whole of General Brandt since we were up there, as the Aplomado Falcon is occasionally seen along that road, and that bird was high on their list!  On the way we spotted a group of Snow and Blue Geese in a field, and along General Brandt itself we logged Red-tailed, Harris’, and White-tailed Hawks, but didn’t stop very often because of the weather.  I did decide to stop at the bridge over that nice wetland, and we managed a handful of hardy water birds (Blue-winged Teal was new for their county list), but the real prize was several Swamp Sparrows that popped up and gave us great views! 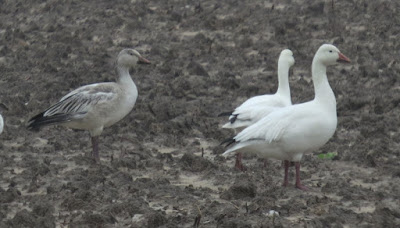 "Blue Goose" (dark morph of the Snow); adult on left, immature on right


Since we were near the visitor’s center, we decided to go on in for a potty break.  By the time I found them at the open feeders, they had spotted a Roadrunner coming in for a snack – that definitely was a first for me (although we commonly get them along the entrance road)!  The normal Green Jays were around, and they had seen some White-tipped Doves while I was preoccupied, but having done what we needed to do we headed out and down Ted Hunt Road, where that nice resaca was bone dry, but we found another one that had some egrets in it.  At FM 510 we headed down to SR 100 and headed west to the dirt road opposite the “Blue Shack” where we pulled in to look for falcons.  Nada, so I pulled up to turn around, and that road was slick as snot; getting out of there was an adventure (Heppy was definitely spraying mud once we got on the pavement)!  We made a U-ie when we could and tried the north end of Old Port Isabel Road (OPIR), and we made it past the skeet range and as far as a pull-in to a gas well before the road again got slick, but we managed to enjoy Eastern Meadowlarks, Savannah Sparrows, and some Long-billed Curlews at that stop.


Backtracked, made another U-ie (the median barrier prevents anyone from turning directly onto OPIR from the north side, and conversely prevents you from turning left out of OPIR), and headed south to FM 511 by way of Los Fresnos to try the south end of OPIR, which is usually pretty decent (up to a point).  Alas, no falcons greeted us here, either, and again, the weather prevented us from getting out much, but a Curve-billed Thrasher popped up close to the car in response to pishing, so that was great!  We tried for Cassin’s Sparrow, as I heard some seeping that was suspect, but the birds were smarter than us and stayed hunkered down.  We got as far as the pipeline work area, where no one was working, but a very cold security guard came out to meet us, and after a pleasant exchange we turned around, as the road north of there was hopeless…


Next stop was the Brownsville Dump in hopes of bagging the crow, but it wasn’t meant to be; it was so miserable that none of us even wanted to step out but were content to watch the show from the relative comfort of the car!  We spotted a suspected Franklin’s in the mix but I wasn’t convinced, and when the bird flew it didn’t show the classic white band on the wing.  However, a darker-mantled gull did make an appearance on one of the mounds, but he took off before I could discern the leg color; I’m presuming Lesser Black-backed at this point (as they do show up regularly), but he didn’t show a lot of mottling on the head, either, as many LBB’s show.  I was really disappointed that not even a Chihuahuan Raven showed up, as that would have been a life bird for Margaret!  A pretty Black-necked Stilt fed next to car as a consolation prize… 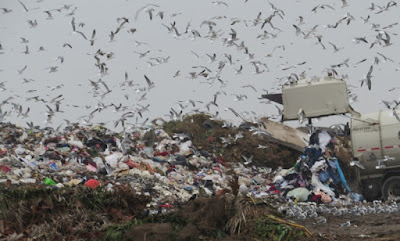 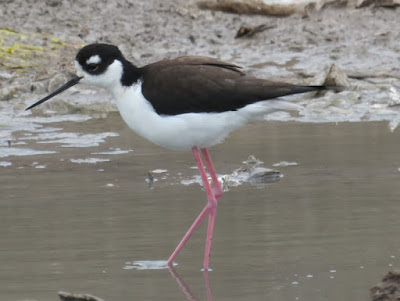 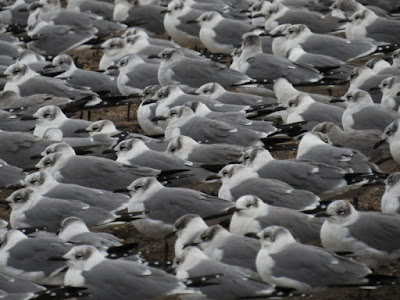 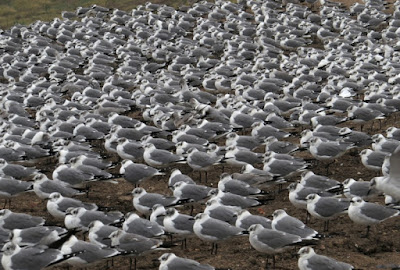 Our last ditch chance for the Aplomado was along Boca Chica Boulevard, so we headed down there, with the biggest show being about 20 Gull-billed Terns dancing across the road!  But even normally solid Palmito Hill Road was slimy, so we only went as far as the overlook (where we had a distant Red-tailed Hawk), then headed on down to the flats for shorebirds.  The wind was still brutal but Frank did spot a huge group of Pintail and Scaup out on the mud, so that was fun (it was a challenge trying to scope from inside the car, as none of us wanted to go out in the “stuff”)!


We had to head back after that, logging only 63 species for the day.  Bird list: