A Cold Day in the Desert

It was somewhat dry when I went to pick up Josh this morning, but it wasn’t long before we got into the mist and the wet and the yuck heading to Starr County!  We logged a very damp Red-shouldered Hawk on the way, and once there decided to do Falcon State Park first, not only because birds are more active there in the morning, but it was still misting and I didn’t care to be “out” in it!  We did end up stopping along the road several time just to try and pish up things, but weren’t very successful (except for Orange-crowned Warblers and a Ruby-crowned Kinglet actually showing his ruby crown)!


After checking in we slowly made the rounds, and I was very relieved when a wet Roadrunner made an appearance – that was definitely one of Josh’s targets!  Bewick’s Wrens were singing but never gave views, and both flavors of Yellow-rumped Warblers chipped here and there.  We decided to walk around the overflow lot a little (and added several inches to our height due to the clay) where we added some gulls and fly-by Least Sandpipers to the list, but a sparrow popped up just for a couple of seconds that struck me as a Field, but struck Josh as a Cassin’s (and of course both of us were claiming it looked nothing like what the other claimed J), but as I got to thinking later, it possibly could have been a Brewer’s, but all I remembered was a peachy cap, eyering, pinkish bill, and striped back.  Josh thought the back looked more mottled, but unfortunately the thing never came back up, so that was the one that got away; we managed to add a Savannah that we could agree on instead… J  Closer to the lake we had great comparative looks at both species of cormorants flying over, and White Pelicans drifted past in a nice “V”.   On the way out I heard yet another Olive Sparrow that Josh talked me into trying to pish out (up till now they had all been very uncooperative), and lo and behold, this one came right up and gave him a great look! 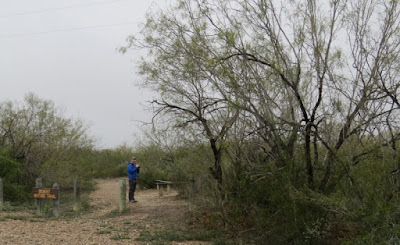 Checking for dickeys near one of the trail entrances 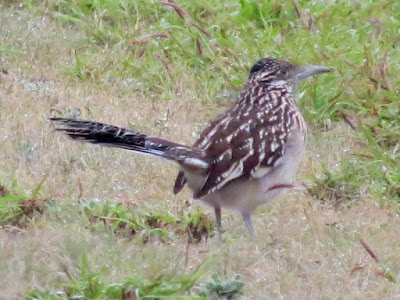 We finished the roads (including the campgrounds, where Josh finally got a Black-throated Sparrow), then headed over to Salineño.  Since the mist had let up somewhat, we decided to hike the Seedeater Trail, which looked like it had been “graded” somewhat and was a bit easier to navigate (there was also a new fence alongside it).  It was dead quiet, although we kinda hit the jackpot at the “midway overlook” where there’s a little trail that goes down into the cane: a harsh crack! alerted me to a Ringed Kingfisher somewhere, and Josh got on it flying downriver before I even said anything!  A little later I heard a splat, and Josh again spotted the Green Kingfisher doing the same!  I heard a plaintive keeerrr! and warned Josh that it was either a Gray Hawk or a Green Jay doing a Gray Hawk (which I suspected after hearing jay-chatter shortly afterwards), but it started sounding like the real deal, and sure enough, Josh spotted the hawk sitting on a dead tree down the trail! 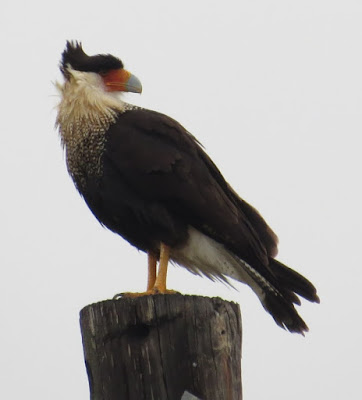 We made it to the canyon with no seedeater, but you could actually walk across the rocks and into the little canyon (I couldn’t go very far due to an unnegotiable knoll, but Josh clamored over it fine), so while Josh disappeared around the corner I waited and listened.  He later returned and felt confident that if the birds had been there, he would have found them, so we headed back a little crestfallen.  We spotted a somewhat pale raptor amongst the Black Vultures that we concluded was a pale immature Redtail (just couldn’t turn it into a Ferrugie…), and flushed a couple of ducks, one which was a definite “Mexican” Duck!  The consolation prize was an Audubon’s Oriole doing its Scrub Jay-like shack shack call, and we got lovely looks along the trail!


Even though we didn’t “need” the oriole now, we still wanted some photo ops, so we headed up to the feeders where a couple of other guys were already there, and one of them happened to be Bob Miller, an old birding acquaintance from San Diego!  After the birds got used to us they came back in a flurry and cameras started whirring:  Kiskadees, Green Jays, Cardinals, both the orioles, both woodpeckers, and even another Olive Sparrow!  A little later a White-crowned Sparrow came in (which I was very happy to see), and Josh was very happy with the mob of Chachalacas, as he had missed them at Estero!  We heard the Long-billed Thrasher but sadly he didn’t make an appearance…  (I concentrated on videos that morning, so will upload some links soon...)  On the way to US83 we had a suspicious-looking raptor that turned out to be what appeared to be a dark morph Redtail!


We wanted to leave early in order to try for the Sprague’s Pipit at Anzalduas, so we headed back, warming up with some Pumpkin Spice Cappuccino on the way! J  We had what we thought was a nice adult White-tailed Hawk along the entrance road, but when it flew, its underparts were clearly immature – he was apparently in one of those “in between” plumages!  It had started misting again when we got there, so since my feet were soaked to the skin after that romp in the mud and water at Falcon (and he had waterproof shoes), we reviewed the Sprague’s’ flight call and I sent him across the field!  As I watched him from the comfort of the car, I could see that he flushed another target bird quite quickly – the flock of Western Meadowlarks!  I couldn’t see anything else he flushed (aside from a flock of Killdeer), but after a few starts and stops and checking out the duck raft in the river, he came jogging back, declaring victory!  I was very happy he got that one!

Josh checks out the ducks on the river

With what time we had we crawled the roads, adding Ring-necked Ducks to the scaup and coot mob, and getting scope looks at the meadowlark flock so Josh could see the details (which was tough as they were all wet…)!  As we made the circle towards the dam, we were both focused on a cooperative Vermilion Flycatcher when I heard a peep, and sent Josh out the door to go get his life Black Phoebe!  I then pulled over and got out myself when he called for help trying to find it, and I spotted the thing way up on the building, hunkered next to the windows and getting bugs up there!  After that we cut across on the middle road, informing him that this was the most reliable place to find (drum roll) House Finch in the Valley, which gave him a laugh, but we indeed ran into a flock, so I razzed him about needing to do a writeup in eBird for them! J  But things got quite birdy on the way out with two more Vermilion Flycatchers, the bluebirds, a flock of Yellow-rumped Warblers that included a nice male Audubon’s, some American Goldfinches (although he needed Lesser L), and some Chipping Sparrows! 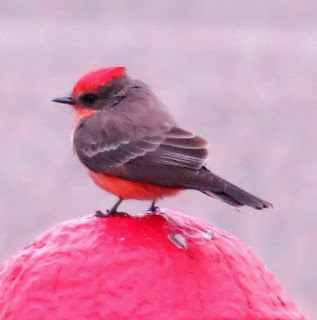 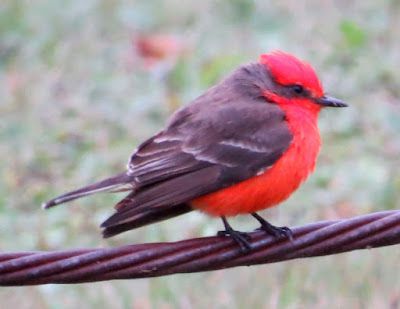 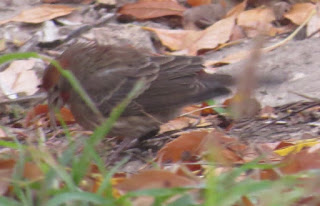 Fuzzy "documentation shot" of one of the House Finches 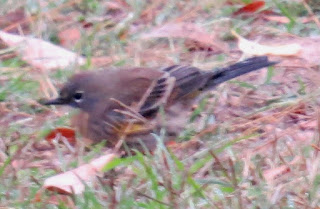 We had to get going after that, so we headed to the airport so he could get his rental for the next day, and said our goodbyes.  Between the two of us we racked up 83 species for the day, which isn’t bad, considering the crappy weather!  Bird list: