They said it hadn’t been this cold in the Valley since 2003 (or thereabouts), so my “guidees” from Missouri were shocked when they thought they were gonna escape the cold weather and enjoy birding in a milder climate!  But they were troopers:  Fran and Jim, along with their daughter Kathie and her husband Dale, braved the 30+ degree weather all day (the granddaughter, Elena, opted to stay at the Inn J) as we made the trek up to Salineño (with the requisite stop at Stripes for a Pumpkin Spice Cappuccino J)!


Despite the bitter cold, they were eager to try the Seedeater Trail first, and since the wind wasn’t blowing it really wasn’t too bad to start.  Everyone had bundled up well, and the first thing to greet us when we parked at the boat ramp was a big ol’ Osprey enjoying his breakfast on a pole!  There were also several Double-crested Cormorants in the river, along with a pillow-like White Pelican, while a Spotted Sandpiper delighted the folks as he bobbed along!  The trail itself was pretty quiet except for flyover Red-winged Blackbirds, and at the cul-de-sac I heard a Ringed Kingfisher way in the distance, but he never came close.  We ran into a couple of “unknown birders” at the little overlook trail (where we also had an Eastern Phoebe) and again at the cul-de-sac, where we enjoyed a female Vermilion Flycatcher sallying out from the cane and a Yellowthroat skulking around.  We scoped a couple of Ospreys that were sitting up, as well as a distant Altamira Oriole as a taste of what was to come!  We were on our way back when the kingfisher sounded like he was closer, so we all barreled back where the two guys were on a Green Kingfisher that was giving his typewriter-like rattle!  Kathie and I got a glimpse of him as he shot across the river, but we never could refind him (and the Ringed stayed frustratingly upriver…). 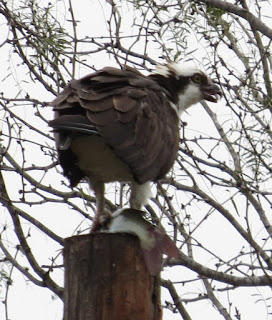 The gang scours the Rio Grande for goodies 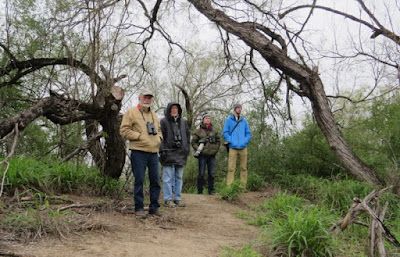 Jim and Fran with the two "unknown birders" 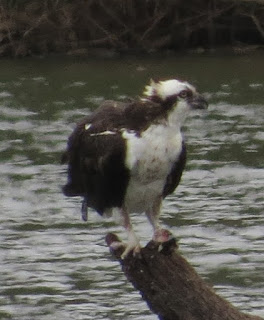 Another Osprey with another fish

Giving up on the seedeaters, we decided to hit the feeders, where the visit to the porta-potty was interrupted by several Chachalacas running across the road!  Settling down, it didn’t take long for the regulars to come in (including the Audubon’s Oriole), but the gang was especially blown away by the Altamira Orioles!  The Kiskadees definitely provided comedy relief as they fought with each other and gave the alarm to send everyone scrambling, but they never stayed away long: pretty soon the Ladder-backed Woodpeckers would come in, look around, and then hitch backwards to make their way to the peanut butter smear, the White-crowned Sparrow was back doing the “towhee shuffle”, and even the Long-billed Thrasher made an appearance! 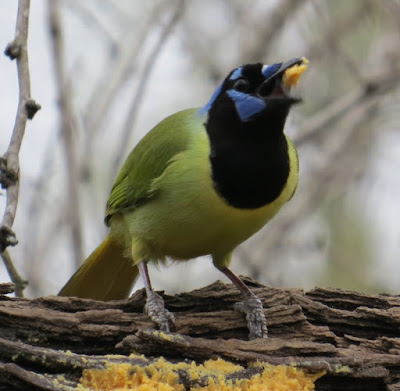 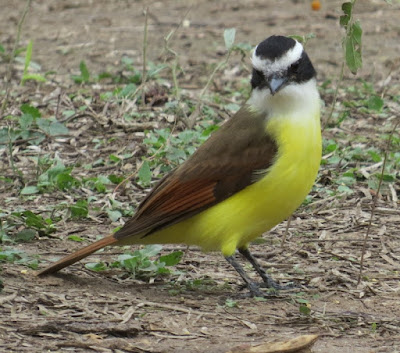 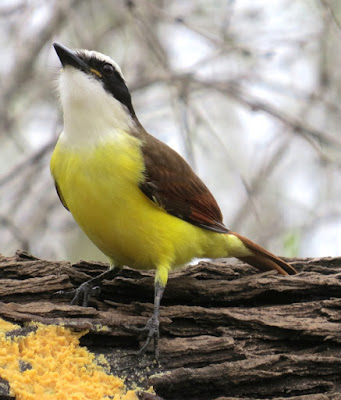 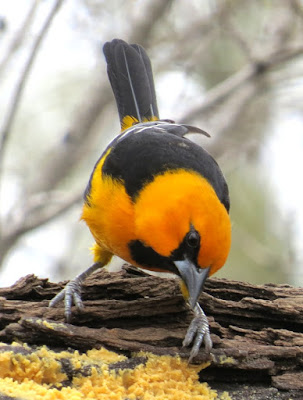 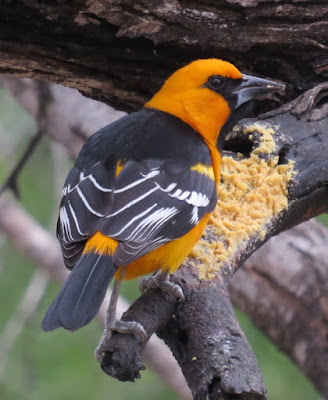 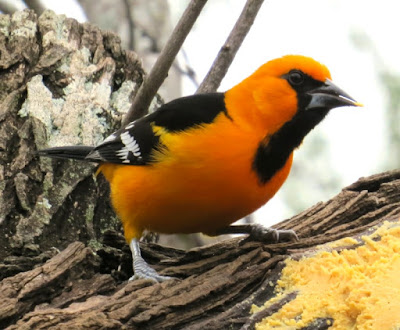 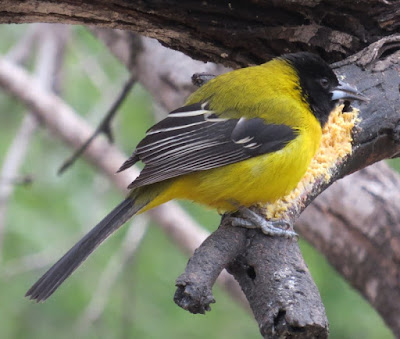 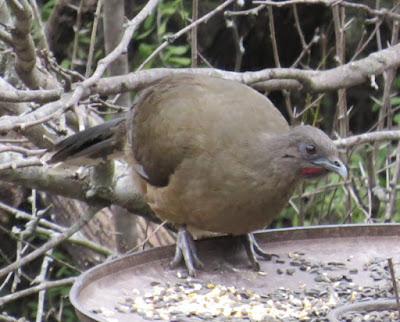 Chachalacas go for the seed tray in the back... 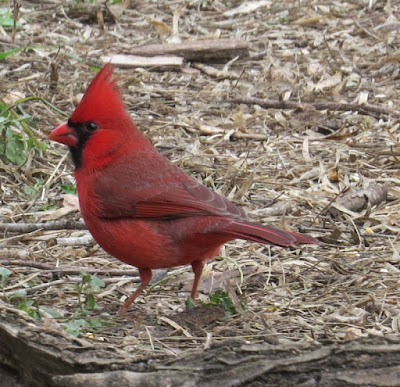 ...while Cardinals (male above, female below) come closer! 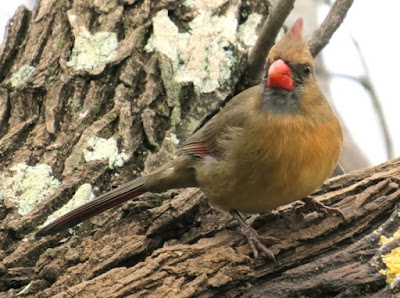 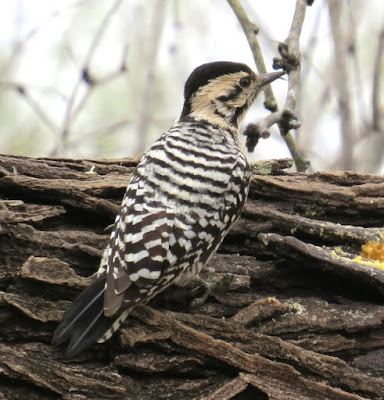 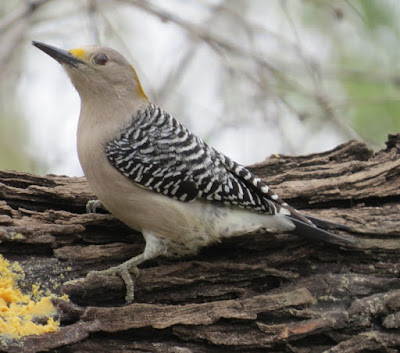 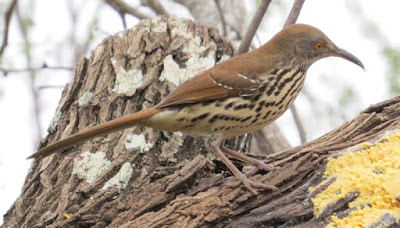 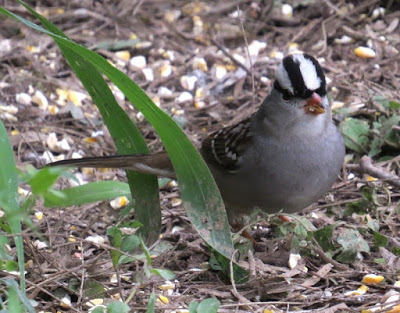 Falcon State Park was slow at first, but braving the overflow lot bagged us Great and Snowy Egrets, Coots, and a couple of gulls (the roads down to the shore were under water…).  The primitive camping area was surprisingly birdy, with a male Vermilion Flycatcher and a snappy Black-throated Sparrow being the highlights.  The picnic area was not very birdy, however, except for a couple of Harris’ Hawks on a pole.  The most action was on the way to and in the hookup campground,  where a Javelina crossed the road, and a Pyrrhuloxia showed off right next to the road!  More Pyrrs were in the campground, and comedy relief was provided by a male Cardinal who came barreling at Heppy (my car), made a brief attempt at attacking the mirror, then landed on the hood!  Dale and Jim spotted a Lark Sparrow on the ground behind us before we wrapped up and headed back to Salineño, but I couldn’t believe we dipped on Roadrunner!!  Thankfully they didn’t need that one… 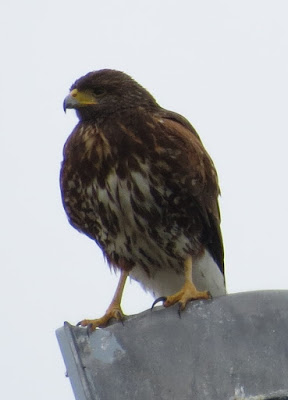 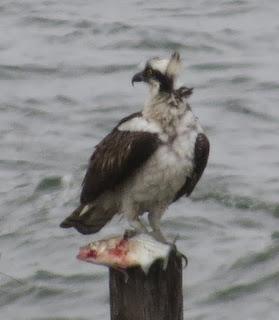 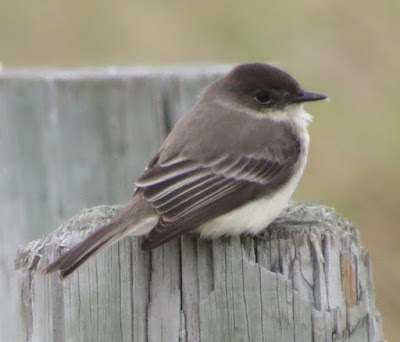 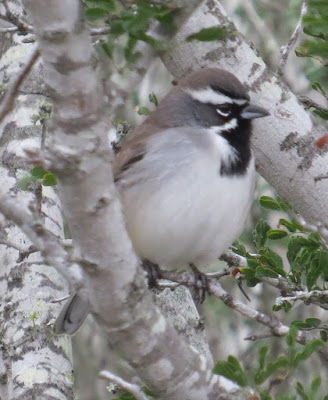 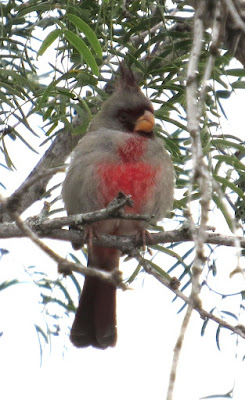 By the time we returned to Salineño it had begun to mist (plus the wind had picked up), but we decided to brave it anyway; no seedeater (and not much of anything, really), so we retreated to the feeders until it was time to go, but not before Fran finally saw her White-tipped Dove! 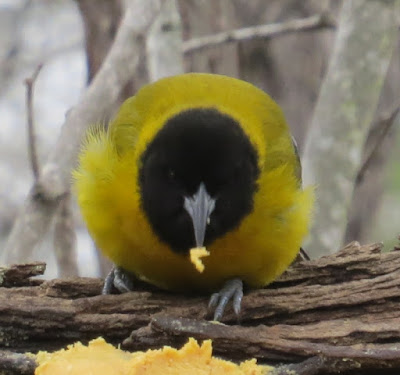 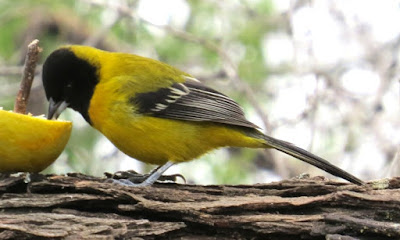