The Long Drive from New York

Priscilla and Peter were escaping the cold and snow of upstate New York, and had driven all the way down, birding and shooting photographs along the way (especially the Whooping Cranes at Big Tree)!  Peter had the “big gun” while Priscilla had the same camera I have (only a newer model), and we had a beautiful, sunny, and windless day to start up on Brushline Road!


As we crawled along the first surprise was a Verdin coming out in plain view, along with a Curve-billed Thrasher and a brief look at a Lark Sparrow.  A Ladder-backed Woodpecker showed well, and the mesquites and ebonies held little flocks of things (Orange-crowned Warblers were very cooperative, but quickly became a junk bird J).  One sparrow flock had a nice combination of both Vespers and Savannahs (good size comparison), and a big highlight was a Harris’ Hawk perched in the vegetation in great light (and not on a pole)!  Western Meadowlarks (another lifer) joined the Mourning Doves in the fields, and we occasionally got a little Common Ground Dove to pose.  But at one spot I couldn’t believe my eyes – yet another Say’s Phoebe showed up on the wire!  (See yesterday’s blog…J)  I heard a couple of Sandhill Cranes in the distance, but we never saw any… L 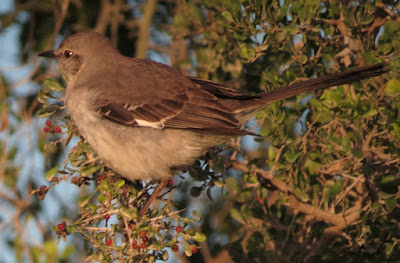 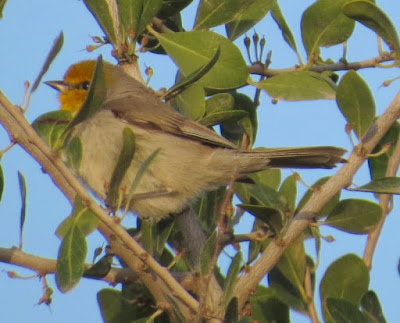 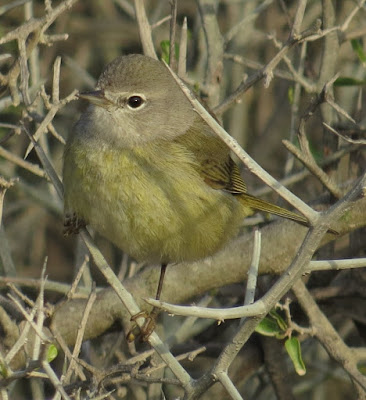 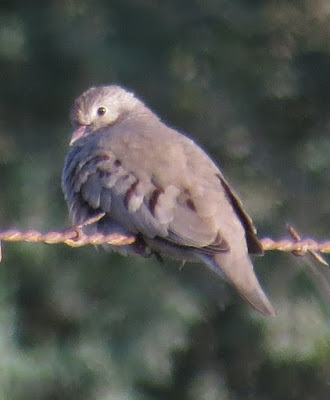 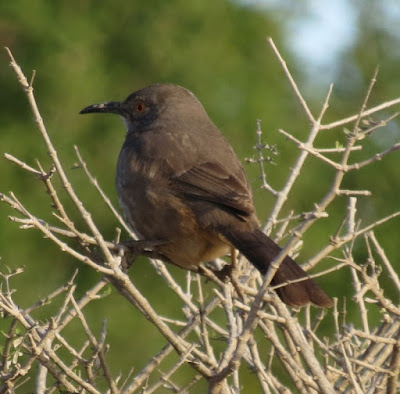 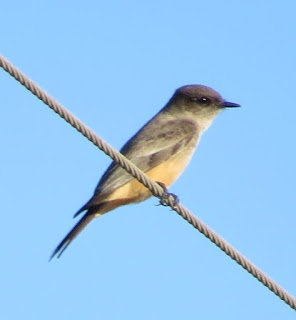 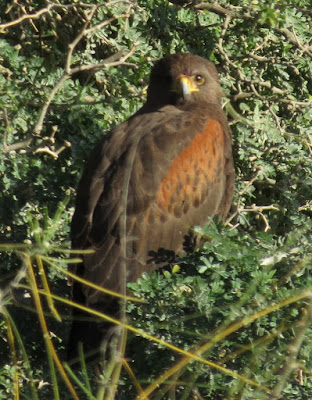 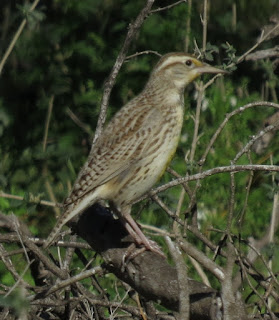 On the north side of SR 186 we bagged more life birds:  the coveted Pyrrhuloxia showed in all his glory, and one would sit right next to the car outside Tres Presas Ranch and sing for us!  (Peter said we could go home after that encounter! J)  A Bewick’s Wren was a little less cooperative (gave Priscilla a good look but Peter couldn’t get his shot), and the Cactus Wren even less cooperative!  A couple of White-eyed Vireos (one looked like a youngster) were very (and uncharacteristically) out in the open, and a couple of Black-crested Titmice and a flock of Yellow-rumped Warblers gave great views.  Peter wanted to try and get an in-flight shot of a Caracara, mentioning that his experience with them was that they spooked easily.  Well.  We came upon one on a pole and I had him get out and stalk the thing, and I think he was right under the bird before it finally took off!  They’re not easily spooked around here!  The farm pond had a nice selection of ducks, herons, both grebes, stilts, a Greater Yellowlegs, and a nice flock of White Pelicans that lifted off from behind the island!  After checking that out we scooted over to Estero Llano Grande, having a nice White-tailed Hawk on the way out (but no Roadrunner, sadly L). 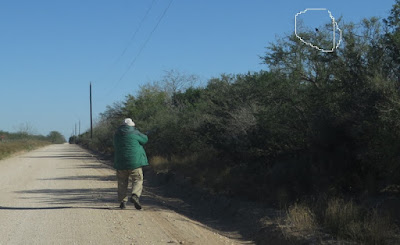 Peter stalking a Caracara (circled - not the same bird described in the narrative...) 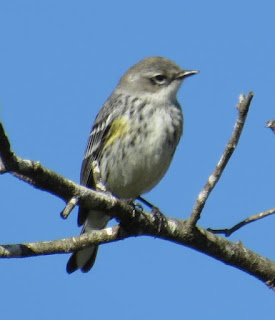 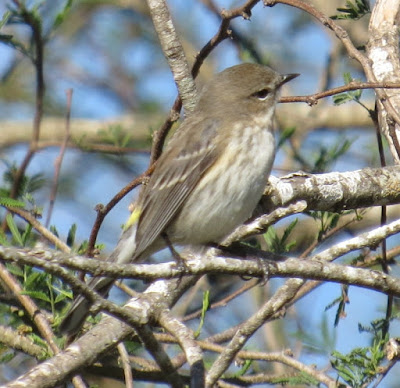 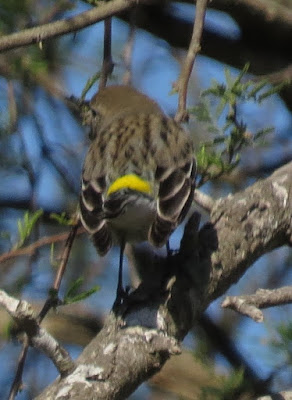 Where the nickname "Butterbutt" comes from... 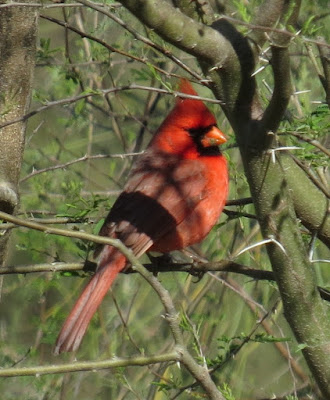 
It wasn’t supposed to get over 70 this day, so we figured the walk out to Alligator Lake wouldn’t be too bad.  But we got there about the same time a big German group showed up, so after we got checked in and took a cursory look at Ibis Pond (where Peter found the Snipe off the deck, and we made sure we were looking at a White-faced Ibis and not a Glossy), we headed straight out to Alligator Lake, enjoying the Least Grebes and Coots challenging each other at Grebe Marsh.  I was surprised that the night herons had disappeared, but we had at least one Yellow-crowned Nightie show for us, plus a noisy Anhinga.  Heading down the trail, thankfully another couple had already spotted the Pauraque, and even being just feet from the trail, Priscilla still had a little trouble spotting him (it’s always fun to see their reaction when they finally do spot the thing J)!  We crept around the corner in hopes that our McCall’s Screech Owl was home, and for the first time in a long time, he was!  That was a wonderful encounter! 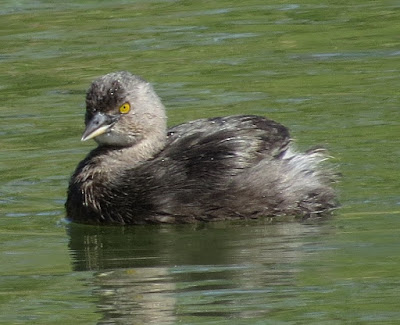 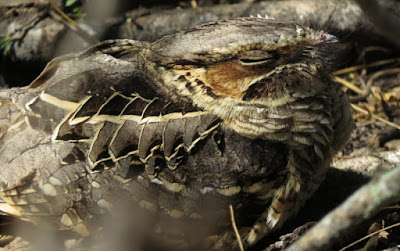 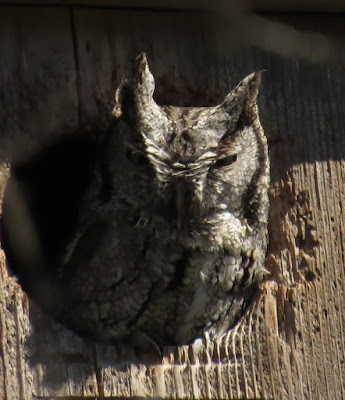 We bagged the White-tailed Kite from the “little overlook” and a couple of Neotropic Cormorants (another lifer) at the “big overlook”, along with a Black-crowned Night Heron and Snowy Egret, then headed back, where another couple had spotted a second Pauraque!  We considered making the loop around Dowitcher Pond, but Priscilla’s new boots were giving her problems, so we hobbled back slowly the way we came, enjoying the Spotted Sandpiper on his log at Dowitcher Pond, along with some Least Sandpipers and several ducks (just not the coveted Cinnamon Teal).  We sat Priscilla down at the “restroom feeders” in hopes that the Buff-bellied Hummingbird would come in, so while I deposited the scope and yet another jacket back at the car, Peter snuck around the building and out onto the boardwalk, and not only found his Cinnamon Teal, but a knockout male Vermilion Flycatcher that posed for him! 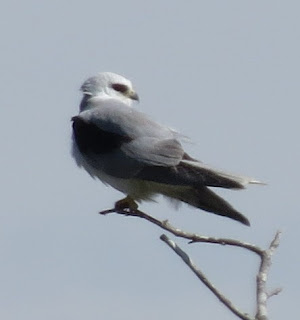 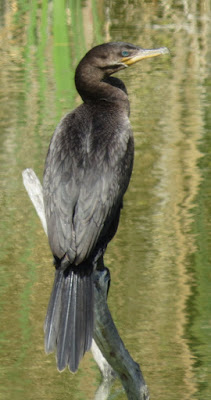 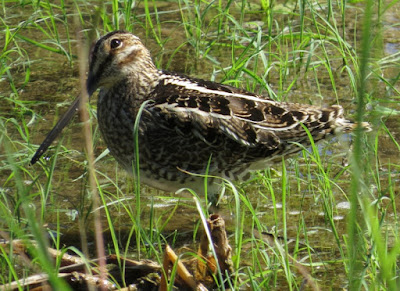 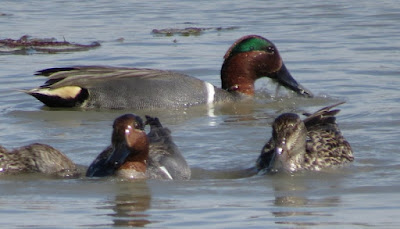 Both sexes have the buffy patch near the tail, but the female's is more subdued. 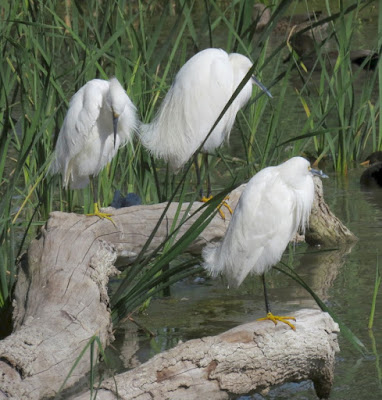 After I returned he and I headed out to the Tropical Zone while Priscilla rested some more (three chachalacas were running around the feeder area before we left, and a quick look off the deck added a female Cinnamon Teal so I could at least count it J).  We headed out by way of the little trail behind the visitor’s center, where a few butterflies were showing off – common stuff like Brown Longtail, Fiery Skipper, Laviana White Skipper, Reakirt’s Blue, and Tropical Checkered Skipper (we had had a Cassius Blue on the way in).  It was rather quiet by the time we got back to the Zone, but an Olive Sparrow made a brief appearance just short of the picnic table, but didn’t stick around long enough for Peter’s camera… L  The feeders (both at the picnic table and the Indigo Blind) were quiet as well except for a couple of White-tipped Doves and a Buff-bellied Hummer that insisted on sitting on the back of the feeder!  We checked the butterfly garden, which was pretty dead except for one bush where we had Clouded Skipper and Sachems in addition to the butters we had earlier.  Peter was getting pretty tired by that point, too, so we headed out, shooting a pretty Red Admiral that landed on the road!  Priscilla had made her way out to the camp host area and was talking to a lady who was advising her on where to find parrots in the area! 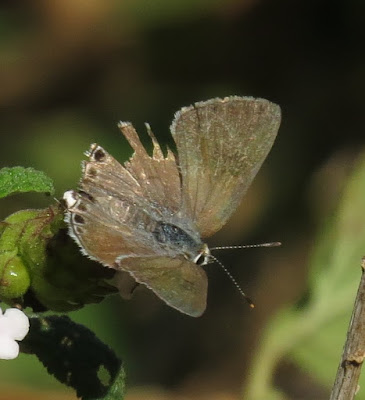 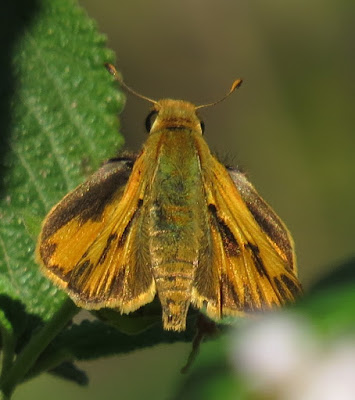 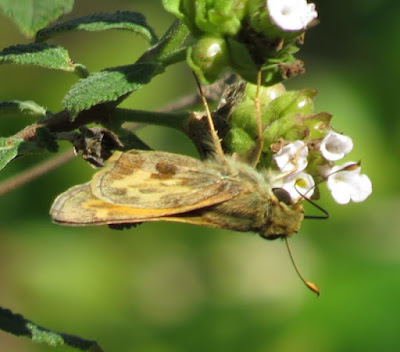 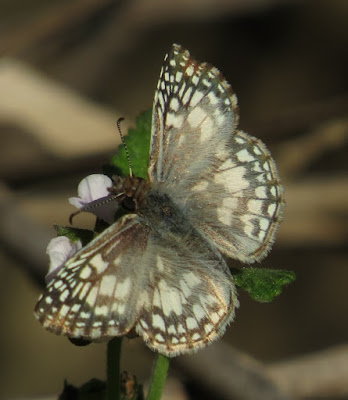 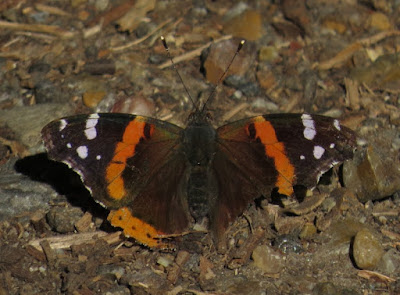 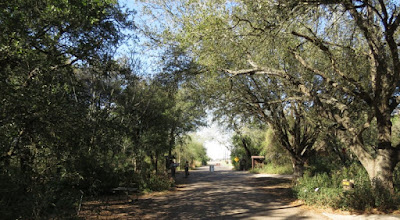 Priscilla chats with one of the park hosts in the Tropical Zone!

We headed home tired but happy campers after that, with a respectable 79 species for the day!  Bird list: