No Room at the Inn

Janie, Linda, and Vicki (who had all worked for ATT up in Houston) were making their regular trip to the Valley and usually would stay with us at the Inn, but this time we were full up! L  They still wanted some guiding, though, so this trip Vicki brought her teenaged grandson Kaden with her (and left hubby at home J) and we all piled in Linda’s mini-van and headed up to Brushline Road in the fog!


Linda offered to let me drive once we got there, so we started the crawl in the fog, which made things pretty quiet except for occasional Green Jay and Cardinal.  At one stop a cooperative White-eyed Vireo showed briefly, and while we had a semi-hidden view of a female Pyrrhuloxia, down the road was a whole mess of ‘em which showed beautifully!  The ag fields had Horned Larks and Savannah Sparrows, and our only House Wren of the day burbled unseen from a hedge.  There were quite a few Common Ground Doves along the road, and an Inca Dove was singing at one spot where we turned off the motor so Vicki could get a picture!  We had a nice look at a male Northern Harrier glide by, while a female sailed by on the other side of the road.  We spotted some Caracaras out in a field, but something looked a little weird; I took some pictures but couldn’t make a definitive ID before the thing took off and stayed very low below the ridges, but once home and getting the pics on the computer, the mystery bird turned out to be a Peregrine Falcon! 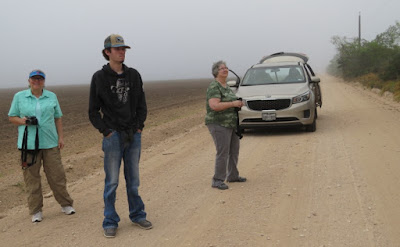 Vicki, Kaden, and Linda along Brushline (Janie is hidden...) 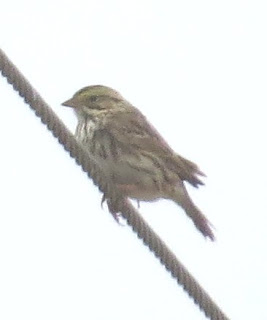 Savannah Sparrow in the fog 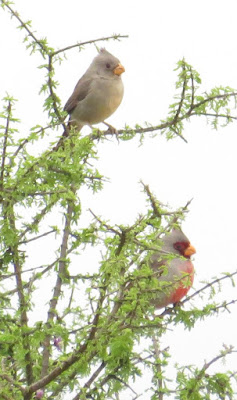 Pyrrhuloxias (female above, male below) 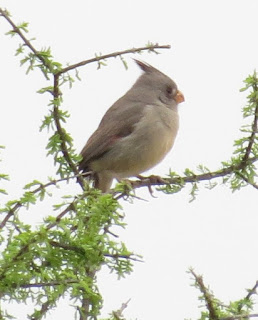 Close-up of the female 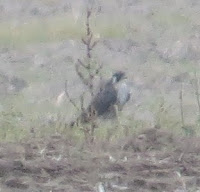 Better than a scope (sometimes)!  The Powershot revealed this distant blob as a Peregrine!


Continuing on, a little pale flycatcher turned out to be a female Vermilion, and an accipiter that kept making passes in and out of the woods finally crossed the road and allowed us to get an identifiable look:  a Sharp-shinned!  Bewick’s Wrens were all over; one finally sat out in the open right on top of a stick!  A large hawk on one of those big stand pipes turned out to be a Red-tailed, and a pretty Kestrel shared a tree with a bunch of Red-winged Blackbirds.  At one stop a burro came over to see what was going on, and Linda made friends with him right away! J  Just before we got to 186 another Red-tailed Hawk sat close to the road (this was a youngster), and a few Lark Sparrows and shrikes posed on the wires.  As an aside, Kaden was a great spotter and a great direction-giver; he would make a superb guide! 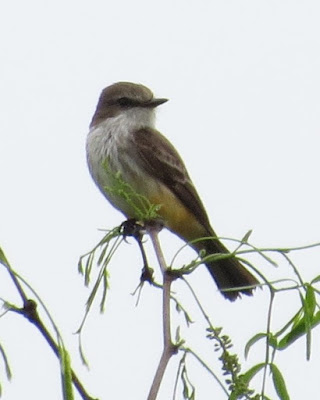 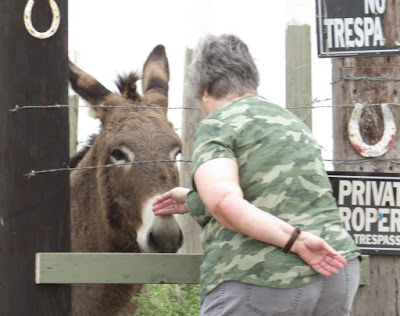 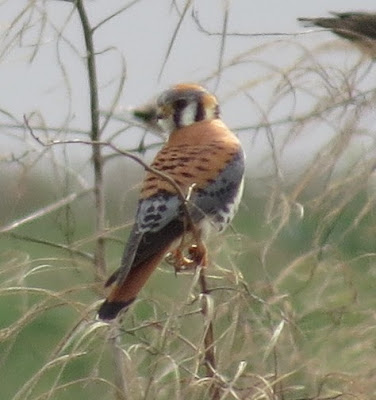 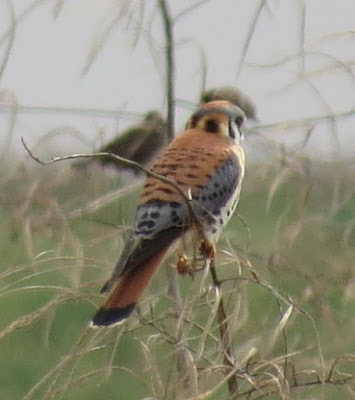 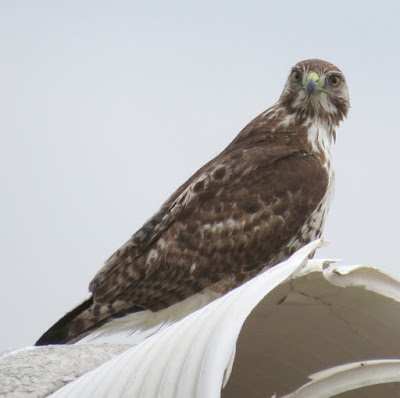 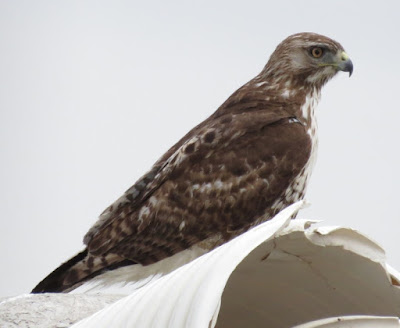 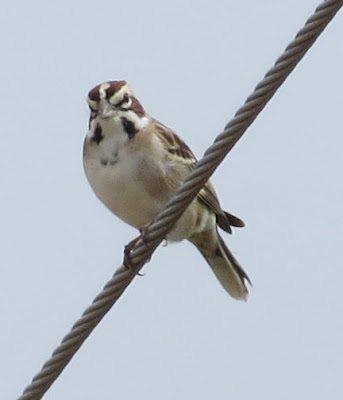 North of SR 186 the Verdins were also all over, but they didn’t wanna cooperate.  Same with the Black-throated Sparrows; one morphed into a Yellow-rumped Warbler, and another one did give a brief look, but not everyone got on him… L  At one point we had a Cassin’s Sparrow on one side of the road and a Cactus Wren on the other; the Cassin’s did do a little skylark for us, but the wren stayed hidden.


The gang was up for the hike out to La Sal del Rey, so we gathered our water and scope and headed out!  An Orange-crowned Warbler and Blue-gray Gnatcatcher gave a brief look while we tried to get another Black-throated Sparrow to come out, and more Verdins were teasing us with fleeting views while a Red-shouldered Hawk yelled in the distance.  A beautiful male Ladder-backed Woodpecker showed well, which was good as only the female showed up for the gang at the Salineño feeders!  We were wondering about this huge crowd of people coming at us from the lake, but it turned out to be some organized group with mostly moms and their kids (and one did not want to walk back! J)!  The only thing at the lake were two Laughing Gulls, and we spotted another Bewick’s Wren on the way back, but everyone was pretty overheated by then (no one cared about the Ruby-crowned Kinglet rattling, either J) so we dragged ourselves back to the car to eat lunch and recover! 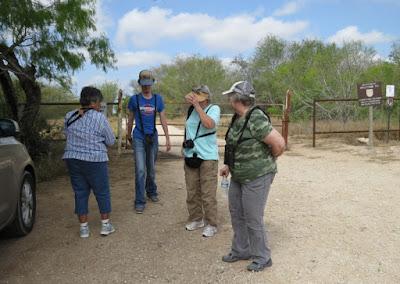 Getting ready for the big hike!  (L-R:  Janie, Kaden, Vicki, and Linda) 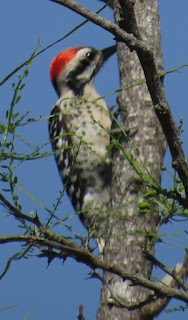 It was all road-birding after that, and shortly before we reached Chapa someone piped, “What’s that?!”  A beautiful White-tailed Hawk was perched right on the ground to the left, but didn’t stay put long!  Thankfully everyone got at least a flight look, but I went up to Chapa to turn around and see if we could refind him.  Sure enough, we spotted him soaring around and got great looks!  I had heard another Cassin’s Sparrow and was trying to coax him out to no avail, but then Kaden spotted another raptor hidden in the tree next to us; I couldn’t see any field marks to save my life, but he let loose with his distinct “Arrr ahRAH ahRAH ahRAH aRAH!”  Another Whitetail!  (He took off, too…)


Making the jog east on Brushline we caught sight of another buteo soaring overhead that turned out to be a Krider’s Redtail!  Several Caracaras posed along the way as well, but the Harris’ Hawks (although numerous) weren’t as cooperative.  A couple of lizards posed on posts that my best guess on was Texas Spiny, but they might have been Mesquite Lizards as well – will have to get feedback on them!   Heading north, Kaden spotted a deer along the fence line, and when I backed up and got a look, it was a female Nilgai!  (We had also seen what looked like Impala on the other side…)  An Armadillo lumbered across the road for another mammal sighting!  The pond was somewhat sparse, but we were able to pad the list with some female Green-winged Teal, a few Least Sandpipers and Long-billed Dowitchers, some Long-billed Curlews, and singletons of Great Egret, Pied-billed Grebe, and Greater Yellowlegs.  I thought I might have had a Baird’s Sandpiper, but I just wasn’t sure…  A couple of Black Vultures joined the Turkey Vultures and a Caracara that had found something dead in the game ranch.  Another Verdin was calling right by the car, so we tried to find that one, and finally he was cooperative!  The gang was happy! J 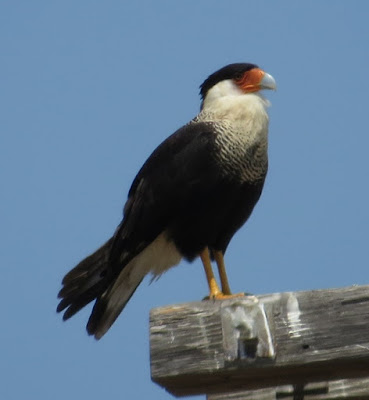 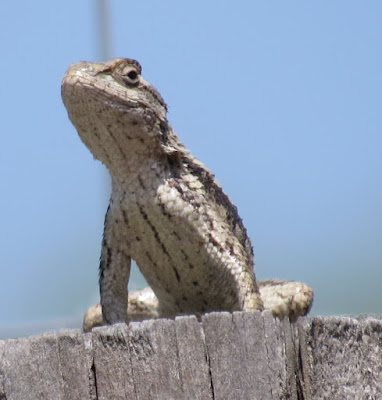 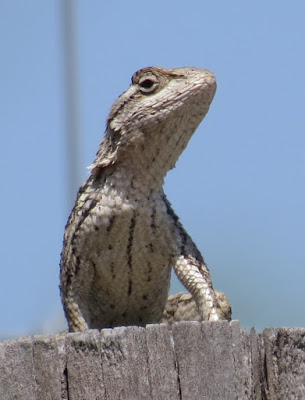 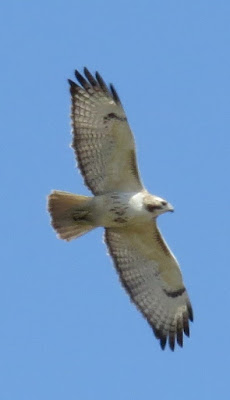 Several views of the Krider's Redtail, considered merely a pale morph by many 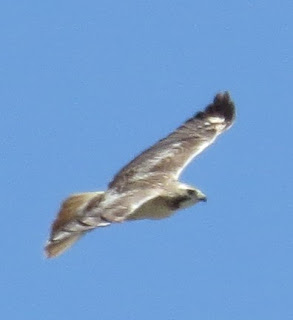 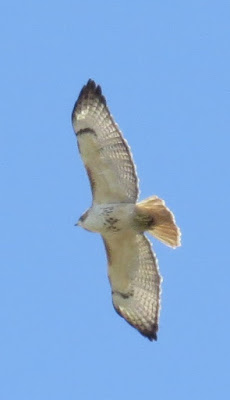 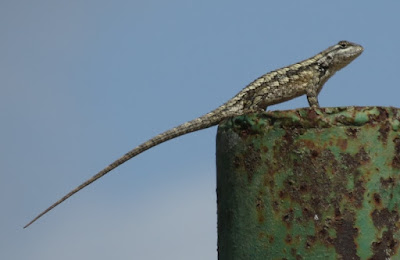 Yet another Texas Spiny Lizard


We scooted out of there and headed down Ken Baker; it was actually more birdy where the cattle were, adding cowbirds and grackles to the list, but also a very cooperative Roadrunner!  More shrikes and kestrels were on the wires, along with a handful of Western Meadowlarks that conveniently wheeped,  but it was already 88 out there and we weren’t kicking up much else, so we called it a day and headed on home with 57 species for the trip, plus an additional subspecies (or whatever they’re calling it now) with the Krider’s! 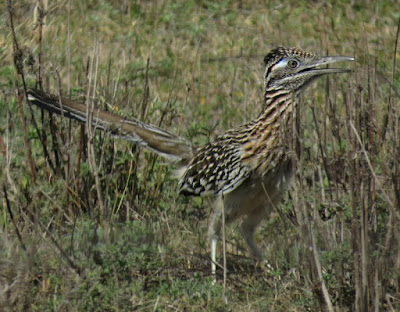 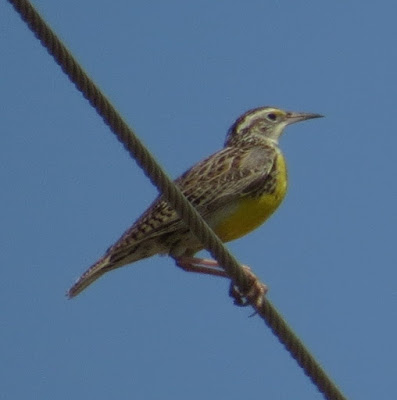