With our normally busy spring guiding season having gone bye-bye with the travel restrictions set in place as a result of the COVID-19 crisis, Birder Patroller Deb was moved to help out and actually hired me to help her with vocalizations!  J  So since Elf Owls had returned to Bentsen (and Whippoorwills were possible), we decided to head into the park an hour before dawn and hear what we could hear!  Thankfully the predicted wind advisory was not to materialize until noon, so it was quite pleasant, with a clear, star-studded sky.  But things were very quiet to start: we did pick up a distant Great Horned Owl (that we eventually got closer to), and a Cardinal was the first songbird to start tuning up.  Ironically it was when the sky started lightening in the east that the Pauraques started sounding off, and at one point we actually spotted one on the road behind us, doing “knee bends” like a Rock Wren, then periodically jumping up to snatch a bug!  The “McCall’s” Screech Owls were softly trilling, and thankfully a pair started calling close to the road so Deb could hear them!


Sadly, that was it for the night birds; the normal players (particularly Couch’s Kingbirds and Mockingbirds) brought the morning to life, and a Long-billed Thrasher started fussing right next to us, giving off all three common call notes (the smack, the duit, and the faaaaaa!)!  A Clay-colored Thrush called, but was a little too distant for Deb to pick out amongst the rising cacophony.


Instead of “waiting in the dawn” at the resaca as I do on my Birdathons, we continued on and did the loop through Acacia Circle.  We heard a Beardless Tyrannulet do its dear dear dear song near the restrooms, sounding like we were right on top of him, but could we find him??  Of course not!  We finally gave up and continued on, when Deb spotted the Gray Hawk in a tree which was undoubtedly the same one we had heard whistling!  A White-tailed Kite sailed overhead, but in the gloom Deb couldn’t see any detail.


Once in the loop we spotted a Bronzed Cowbird on the wire and a White-winged Dove in a dead tree.  We then took the Kiskadee Trail back to the resaca, where we found the trail’s namesake on the nest (there were two nests, in fact)!  They had a little spat when one of them tried to bring in some nesting material while the other was still sitting on said nest…  A Verdin was chinking brightly (but refused to come out as usual), and heading over to the resaca an Upland Sandpiper called overhead!  We logged a pair of Pied-billed Grebes and a distant Anhinga; Deb spotted a Great Blue Heron go past, and a Great Egret also flew over the road at one point. 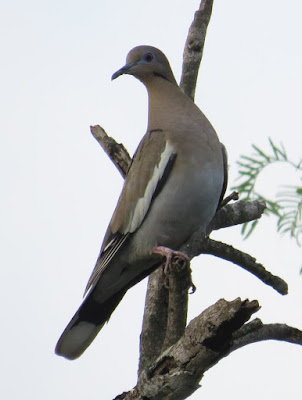 It was shortly after that as we were headed out (and I was trying to video a singing Cardinal) that one of the rangers pulled up and informed us that they were closing the park! L  Hidalgo County had just issued their own “shelter in place” order the night before, but according to the order (of which I had a copy in my pocket with pertinent lines highlighted), one could still travel to parks and outdoor areas (in or out of Hidalgo County) to “recreate”, so long as you abided by the “Social Distancing Guidelines” (Deb and I had done our part by driving separately…)!  The ranger (who was very nice and really seemed pained to have to break this news to us) said this was a state-wide thing from Texas Parks & Wildlife, so we (along with several other people we passed who were also biking or walking their dogs) were horrified at the prospect that our beloved state parks were now off limits!  (Hold that thought…) 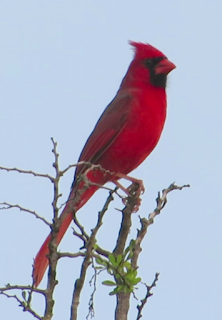 Video grab of a Cardinal

So we continued on, picking up a trio of Chachalacas and a lonely White-tipped Dove at the Nature Center area (they all seemed to be saying, “Where’s our breakfast??” as feeding had discontinued earlier in the month), and somewhere in here I heard a Roadrunner cooing amongst the similar-sounding doves!  Cave Swallows wheeled over the canal area while a single Barn sat on the wire, and the Black Phoebe actually sat up high in a tree near headquarters!  A buzzy “Zoo-zee-zoozoo-zee!” betrayed a Black-throated Green Warbler, who refused to come out…  We went to check the bathrooms (which were closed), logging a singing House Wren and Inca Dove on the way.

Chachalaca finding something else to eat besides oranges... 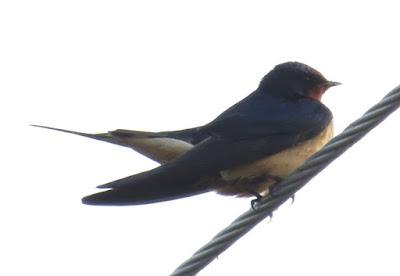 I was in dire need of said bathroom, so we agreed to meet at the El Tigre near the freeway.  While I was taking care of things (and grabbing a package of Ramen noodles that I haven’t been able to find anywhere J) Deb called Estero Llano Grande, where Ranger Javier assured her that “the wetlands awaited”! J  Apparently the decision to close was on a park-by-park basis (the Bentsen ranger told us that Resaca de la Palma had also closed), and I blessed Javier a million times over for keeping Estero open!  Once we got there we headed straight into the Tropical Zone (after enjoying a Long-billed Thrasher in the parking lot that was serenading us), but the migrant show that was so prevalent on Sunday seemed to have had dissipated, as the only warbler we encountered was the ubiquitous Orange-crowned.


As we strolled, an Olive Sparrow sang his bright bouncing-ball song, and a Myiarchus flycatcher gave a fleeting glimpse, which could have been the reported Great Crested, but we never saw it again (and never heard it call L).  The Buff-bellied Hummingbirds were chattering around that exotic cactus they love, and an accipiter that blasted over revealed his identity as a Cooper’s when he started calling!  Over by the Indigo Blind a female Hooded Oriole wheeped (and got chased off by another), then I tried to remember exactly where Ben had showed me the Great Horned Owl nest!  We ran into a gal named Tracy who had worked with Deb at the RGV Birding Festival, and she pointed the nest out to us, this time with Momma in it!  While we were chatting a Ruby-crowned Kinglet actually sang a little of its bubbly song! 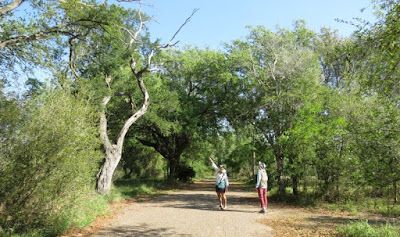 Tracy points out the Great Horned Owl nest (below) to Deb 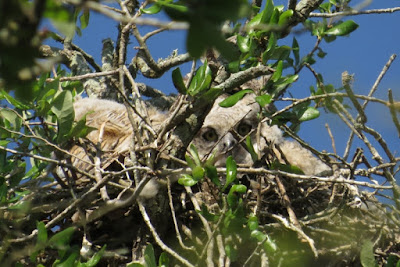 From there we headed to the drip by way of the butterfly garden, where a Carolina Wren was sitting up and calling in plain sight, but unfortunately Deb couldn’t get on him before he ducked down… L  We gave the two drips about 15 minutes each, where someone had placed some grapefruit that a couple of Mexican Bluewings were taking advantage of!  Eventually a Green Jay and Orange-crowned Warbler came in to the “Pauraque Hall” drip, while only a White-tipped Dove came in to the “Picnic Table” drip.  Black-crested Titmice came to the tray feeder occasionally, and somewhere in here Deb spotted a Ruby-throated Hummingbird!  A Purple Martin wheeled overhead, and a young Altamira Oriole was working on sewing up the ever-present nest on the wire (even if it only consisted of a few strands J)!  The adult came blasting over before we ran into “Salineño Mike” and started chatting about the voluminous number of Red-billed Pigeons that were reported along the Seedeater Trail! 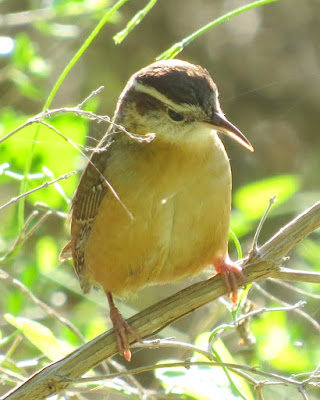 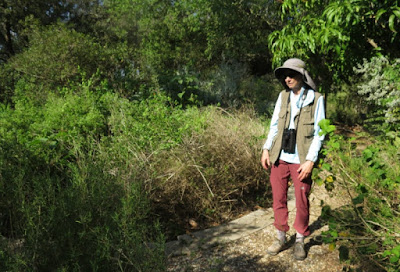 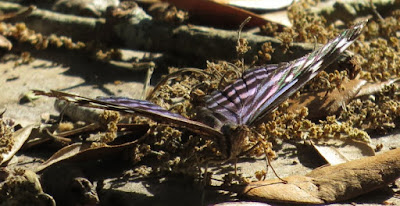 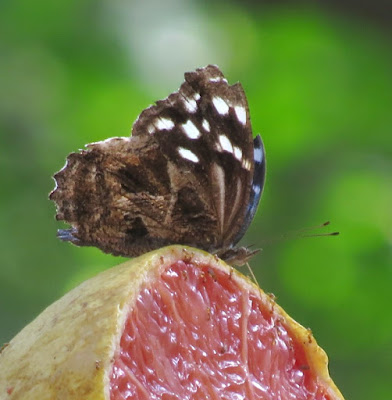 He made it to the grapefruit! 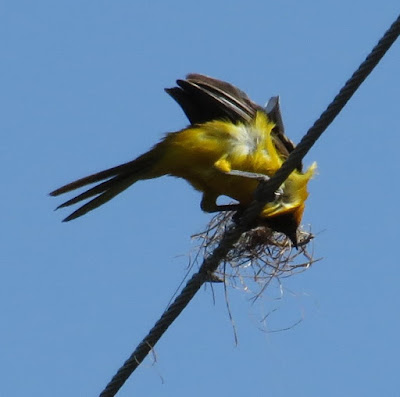 A young Altamira Oriole practices weaving a nest from the wire 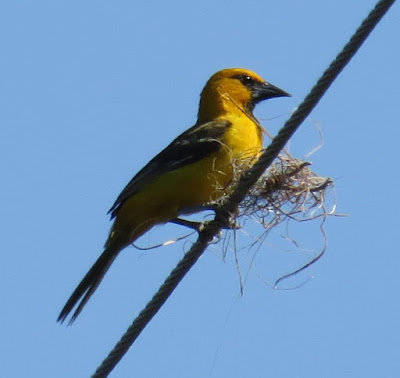 Continuing to the Park Host Area, we logged a bunch of Mourning Doves (MODOs to the jaded) and spotted a pair of Curve-billed Thrashers running around on the floor!  From there we decided to check out “Mary’s Drip” at the start of the Green Jay Trail (so called because she was the one to cotton me onto that one J), but since the bench was in the sun and it was currently inactive, we decided to go to the deck and finish the morning there.


We had the usual players in Ibis Pond:  Least Grebes, Shovelers, Blue-winged Teal, Mottled Ducks, and tons of Black-bellied Whistling Ducks – a whole herd was resting under the “feeder tree” next to the building like so many lazing cows on a hot day!  A Common Gallinule was poking around some lily pads that looked great for Purple (which would have gotten a lot of people excited), and another White-tailed Kite sailed by amongst the Turkey Vultures!  More Purple Martins wheeled around (expected since their martin house was just out of sight), and Deb looked in vain for Vermilion Flycatchers … 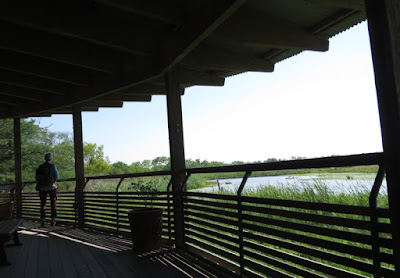 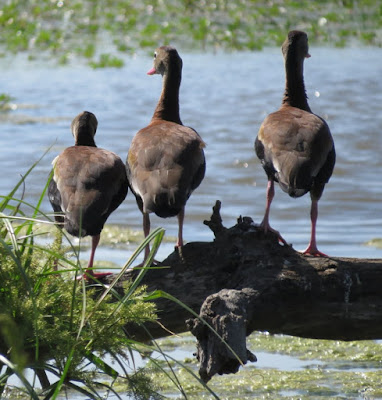 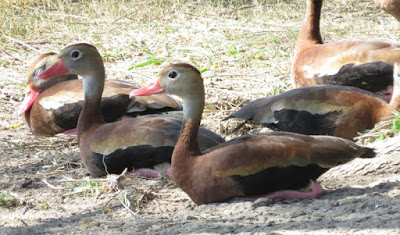 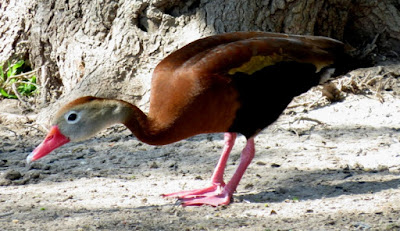 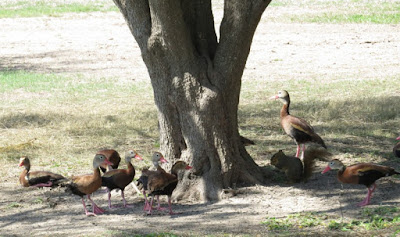 Finding a bit of shade... 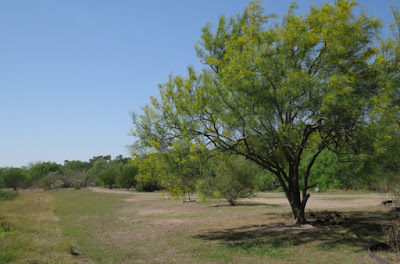 The back trail from the Tropical Zone to the VC

We called it a day, but not before watching a little White-eyed Vireo quivering his wings right next to us in the parking lot!  We finished with a modest 61 species for the morning.  Bird list: