Sharing the Valley With Friends, Part 2

I was totally unprepared:  it was 73 when I walked out the door, with the weather app promising that it was only going to get warmer, so with nothing more than a light jacket, I joined the gang at the main building and we shortly headed out to “Sparrow Road”  (aka 7 Mile off Jara Chinas Road), and before long it misted up and the temps dropped down into the 50s!!  It wasn’t too bad to start:  we immediately had some beautiful Pyrrhuloxias, and at a culvert where folks have had towhees in the past, we stopped and walked a bit to see what we could scare up.  A threesome of Harris’ Hawks was nice, and several little things flitted around like Blue-gray Gnatcatcher and Orange-crowned Warbler (Barbara was very pleased with a photo she got of the latter in some Huisache blossoms), but I think I was the only one to see the Verdin L and Richard was the only one to see the Black-throated Sparrow!  But worse than that was a Lincoln’s Sparrow that was buzzing and refused to come out, and that’s one he really wanted to see…

Jeff and Sandy looking for goodies along Mile Seven Road 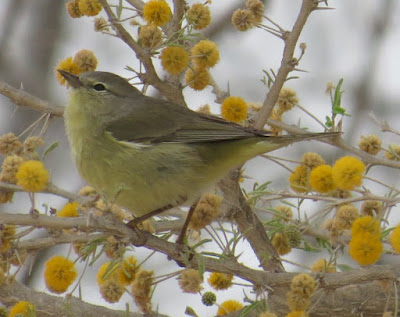 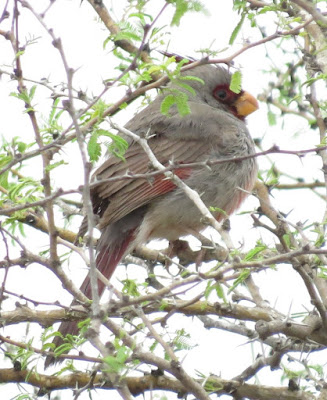 The spitting got worse, so we just crawled along the zig-zaggy road for the most part and only got out to procure photos (which was a trick at times as Barbara was in the “rumble seat” and it was tough to get out)!  Some of the nicer birds we were able to zero in on included an adult White-tailed Hawk on a pole, a Curve-billed Thrasher, and a hunkered down Roadrunner down a dirt road across from a ranch.  We finally got an Eastern Phoebe to come out amongst the thornscrub, but thankfully my charges were entertained by other things besides birds:  one of the ranches had a portrait of what we assumed were the owners painted on their water tank (that was certainly new since the last time I went through there), and the gang appropriately gawked at the huge mansion next door!  As usual, some of the best birds were around the habitations, and we found a lovely Vermilion Flycatcher in the yard, but also three female Brewer’s Blackbirds back near their barn!  Gave an ID lesson on the Collared Doves vs. Mourning Doves, but a Say’s Phoebe along the fence line was definitely the prize! 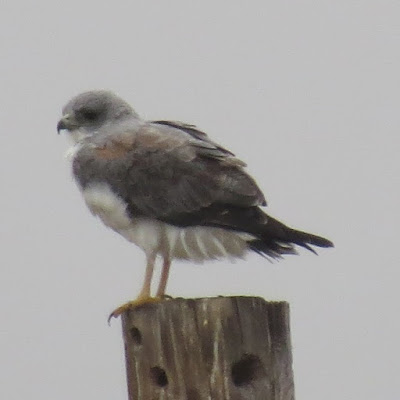 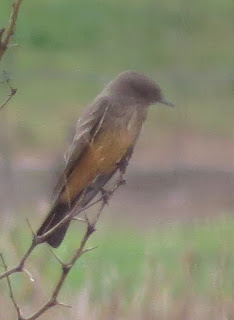 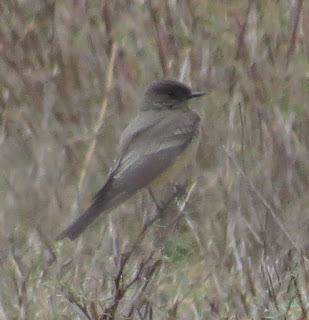 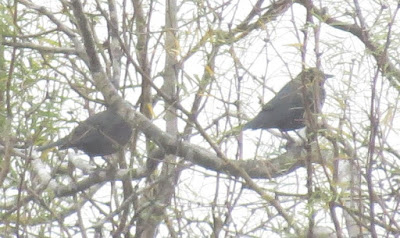 "Proof shot" of a couple of female Brewer's Blackbirds, a "flaggable" bird in Hidalgo County. 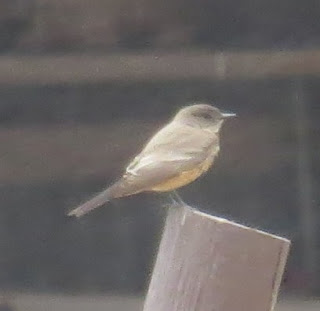 The barren fields had the occasional Western Meadowlark poking around in them, but a little further down we had a “Sparrow Bonanza” as a large flock of Savannah Sparrows fed in the plowed field next to the road (Jeff described it as “the ground moving”), but a little pishing also brought up a lovely Vesper!  At one point Richard and I were debating the ID of a wire bird:  he thought it was a shrike and I bet him an ice cream that it was a Mocker – turned out to be the latter, so I “ordered” a Ben & Jerry’s hot fudge sundae J after which the “ice cream bet” became a running joke…  We also had a bit of excitement in that a fire producing thick, black smoke was roaring behind a farm building close to the road; we had no idea whether they were purposely burning something or if something had caught fire, so we reported it, but the two vehicles that passed us (along with the farm dogs) didn’t seem to be alarmed… 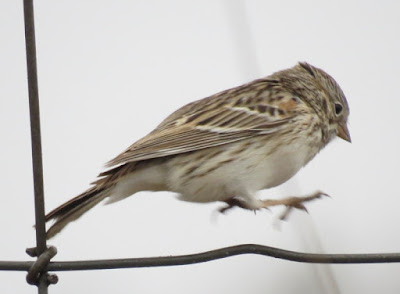 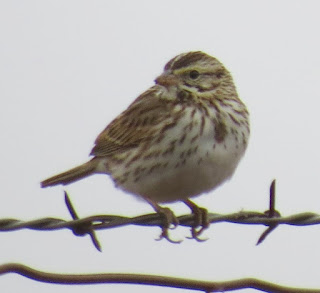 The intersection with Pipeline Road was decision time:  go straight to Estero Llano Grande or try for Rick’s Ferruginous Hawk south of McCook?  (He gave me precise directions when we ran into him the day before, explaining why I missed the thing on Saturday’s chase day…)  We decided to chase the hawk, so we headed north on Pipeline to FM 490 and headed towards McCook, this time with no hawks on the poles!  (In this weather I didn’t blame them…)  After a restroom break at the little gas station (where we all fell off the wagon buying some decidedly unhealthy snacks) we headed south on FM 2058, where we did have a big buteo that turned out just to be a Red-tailed Hawk.  A Killdeer ran down a dirt road and out onto to the pavement to take a drink, and when we came to Mile 16, Richard suggested we take a look, which was a great idea, as it was a dirt road I had never explored!  It was quite productive:  again, near someone’s homestead was a flock of Lark Sparrows, but even better were several Long-billed Curlews! 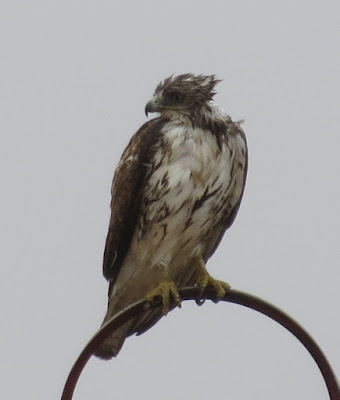 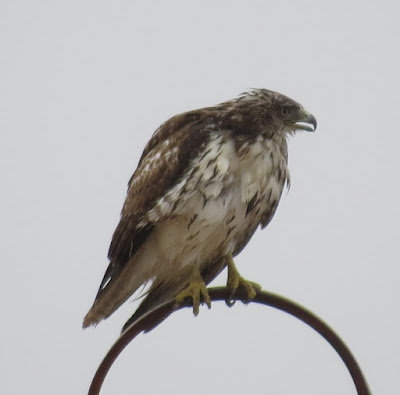 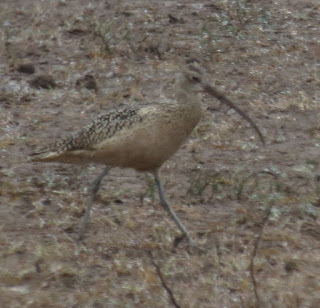 As we approached the barren fields the Horned Larks started showing up, which delighted the gang – that got voted the Bird of the Day for some!  I got quite the education about the wind turbines and their blades and inner workings from the guys (primarily Jeff, I think), and after traversing through unending fields (one of the guys facetiously asked, “Does any of this look familiar?” J) we finally reached Jara Chinas and made a left.  That was where we had a small falcon dart across the road that struck me as a Merlin, but when Richard spotted where he landed in the distance and we were both able to get some not-so-sharp shots (at least on my end), it seemed to have more of a hood than I would expect of a Merlin, but it certainly seemed too small for a Peregrine (and was very streaky below and had an obviously banded tail to boot).  A Kestrel also flew up and tried to land on one of those huge power poles but failed (we think he got blown off), but that distracted us enough that we lost the Merlin Wannabe and therefore were unable to get better shots.  But after getting home and looking at the pics on the computer, it proved to indeed be a Merlin; with the wet weather and poor light, the dark area on the head looked more “hood-like” initially. 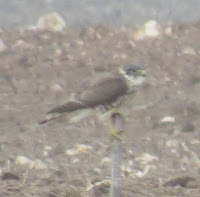 When we made the jog onto Mile 14, it was decision time again:  the weather was really pretty crummy and wasn’t conducive to running over to Estero to hike out for the Pauraque (that was the main target there), so we decided to continue road-birding Mile 14 to its terminus, then return and finish up Jara Chinas.  That turned out to be a great decision as we hadn’t gone far before a whole flock of Black-throated Sparrows showed off for the whole group!  Then as we continued, yet another Say’s Phoebe popped up and put on just a great show and giving great photo ops to boot!  (Something was telling us that this was our third Say’s Phoebe of the route, but none of us could remember where #2 supposedly was until, again, after going through the pictures, I remembered that we had two birds near the fancy homestead along County Line Road…)  One field had no less than five male Cardinals flopping around in it, and some Caracaras gave wonderful views!  After turning around at the ranch (the gang got a kick out of the gate artwork that looked like a guy was shooting a windmill J) one of the girls spotted a very cooperative Curve-billed Thrasher by the road, and another White-tailed Hawk posed nicely! 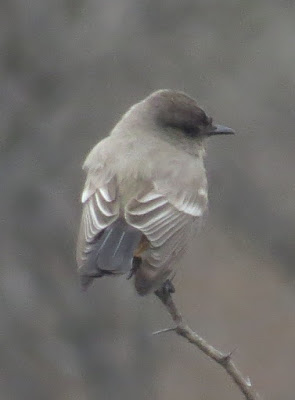 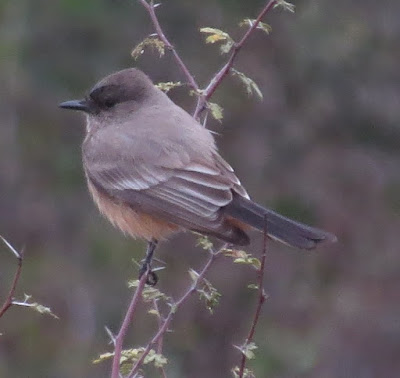 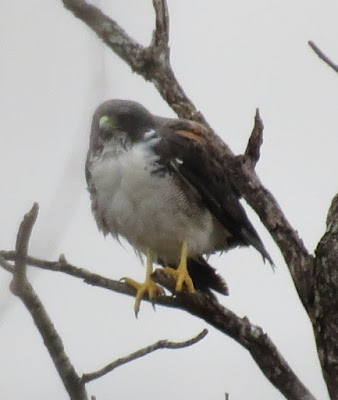 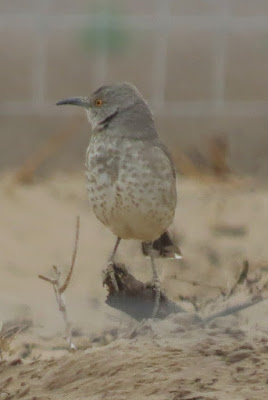 We decided to head home a little early as the gang wanted to do laundry, so we scooted after that.  The species list was a little bare compared to yesterday with only 43, but we certainly had some quality birds!  Bird list: