The Gals from Galveston, Part 2

Well, God let me off the hook on two accounts:  first, the girls decided they wanted to meet me here in Alamo and bird locally rather than have me drive to Brownsville where they were staying (and try to find the condo they were staying in); and second, the threatened 60% chance of rain suddenly went away! J  So we were free to do what the ladies had in mind, and that was to explore as many of the World Birding Centers (WBCs) in this neck of the Valley as they could!


This time Alice Ann drove (it was her car, after all J), and we headed west towards Bentsen Rio Grande SP.  I gave everyone a head’s up that the Green Parakeets sometimes are present in the morning along the wires at Business 83 and Breyfogle, and sure enough, there they were!  Alice Ann performed a couple of U-ies and turns in order for everyone to get the best views, and then we were back on the road! 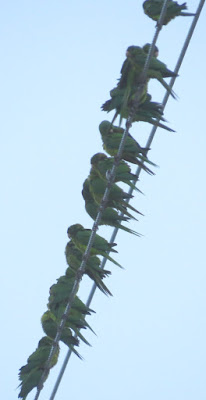 It was misting ever so slightly when we got to the park (not even really noticeable), so everyone agreed to walk as far as the resaca and then come back.  A Sharp-shinned Hawk flew overhead in the parking lot, and after a restroom break we waited in vain for the Buff-bellied Hummers to show (probably too cold yet, after the front that went through the night before), then hiked up to the canal.  Nada there as well (I think it was Jean that mentioned that every time she came there, a Green Kingfisher was hanging out, but not this time L), so we plodded on, and they showed me where they had seen a Bobcat and her cub on one occasion (we managed a pair of Coyotes crossing the road)!  The feeders hadn’t been filled yet, so nothing was around (except two young photographers), but there was some activity at Feeder #4, where the Rose-throated Becard had been hanging out.  It hadn’t been reported in several days (and we certainly didn’t find it among the blackbirds), so we headed on to the resaca, which was pretty empty except for a Great Egret, some scaup, and a couple of Pied-billed Grebes.  I was trying to discern whether a bird on the island was an Anhinga (it was) when a soft rain started descending, so we headed for the shelter to wait it out! 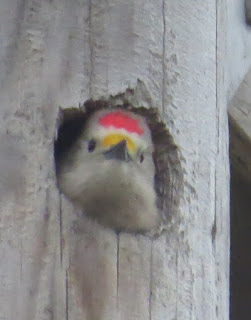 A Golden-fronted Woodpecker has hijacked the Elf Owl's hole! 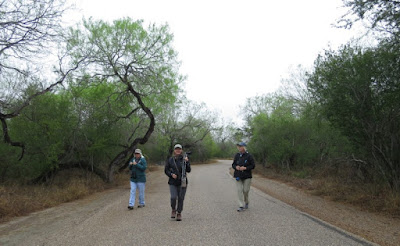 The girls on the main drag at Bentsen

Thankfully the “tram” came by shortly after that (which was really an old van they were using for the time being), so the ranger gave us a ride around the park; an Inca Dove darted in front of us, and on the way back a Chachalaca narrowly missed being nailed as he blasted across, squawking the whole time (we envisioned his buddies back in the woods saying to him, “We dare you to fly in front of that van!”)!  We asked to be dropped off at the Nature Center (it had quit raining by that time) and enjoyed the mob of Chachalacas at the feeders that, after a while, not only started sounding the alarm, but then started chorusing!  We then saw a lady with two dogs coming our way and wondered if that’s what got them going…  Still no kingfishers on the way back (or Black Phoebe for that matter), but after another visit to the restrooms (and the VC to check in and buy stuff J), an Archilochus hummingbird came to the feeder that showed the classic long bill and blobby wingtips of a Black-chinned, then was promptly chased away by the Buff-bellied!  A small feeding flock came through that included a Blue-headed Vireo and Black-throated Green Warbler, and what I thought was a loud Orange-crowned Warbler behind us turned out to be an Olive Sparrow hopping around under the bench in the breezeway!!  (I banged on the VC window to get two of the gals out for that one!)  On the way back to the car Alice Ann got to see her Long-billed Thrasher thrashing on the floor! 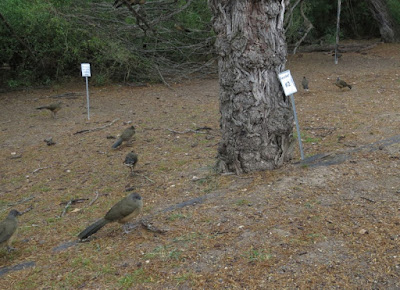 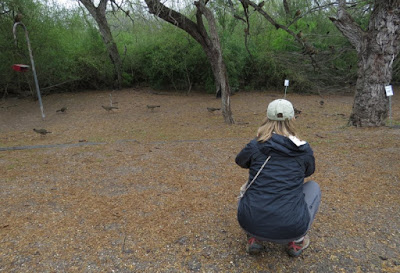 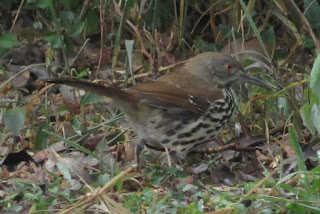 Although not a WBC, the girls were game to give the Audubon’s Orioles at the National Butterfly Center a chance, so we headed over there, picking up a Peregrine Falcon on a pole!  (There were certainly plenty of pigeons in the field for him…)  We got checked in (and got tempted to buy more stuff J), then slowly headed down towards the feeder area as I told the gals that the wintering Field Sparrow had been reported recently, which surprisingly was an exciting bird even in Galveston!  I heard a feeding flock and we jumped out, but they were only Orange-crowned Warblers…  Alice Ann actually took the car down to the Old Gardens while the rest of us continued walking, only we didn’t pick up anything new.  A big tour group was just leaving the feeder area as we arrived; no Audubon’s, but plenty of other stuff was coming in, and Alice Ann was in Seventh Heaven as she’s also a big plant person and was enjoying that aspect of the park to the max!  The same players as the day before eventually came in:  tons of Cardinals, two immature Altamira Orioles in addition to the adult, Green Jays, titmice, White-tipped Doves, and even the gimpy Long-billed Thrasher! One target was the Clay-colored Thrush, and he finally came in to the water feature for a good long drink!  We gave it almost a half hour before something spooked them all, so we gave up on the Audubon’s and took a walk around the garden just to see it, then headed back out, stopping for a Savannah Sparrow in one of the trees.  Then it was on to the next WBC:  Quinta Mazatlan (we decided to skip Hidalgo Pumphouse). 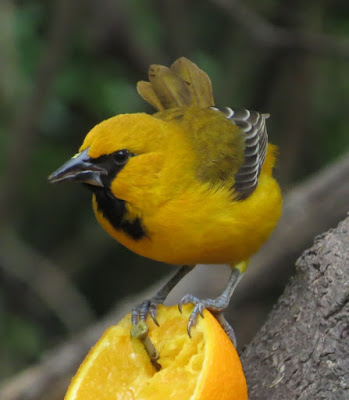 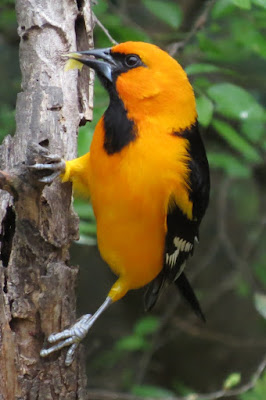 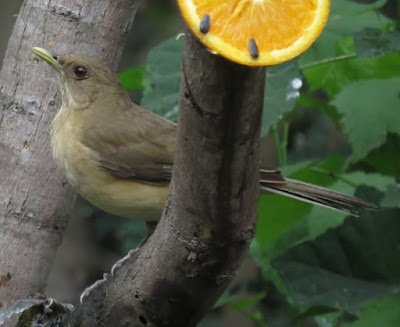 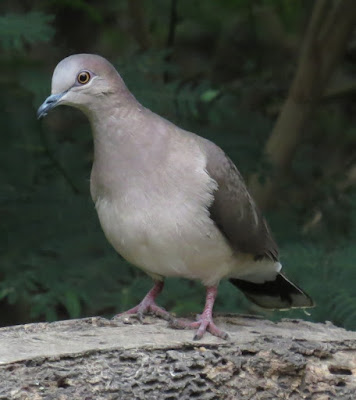 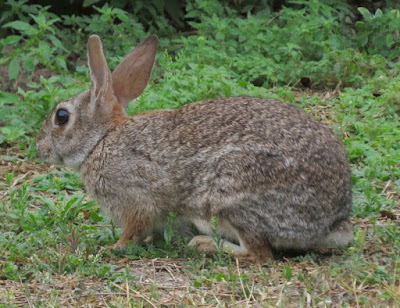 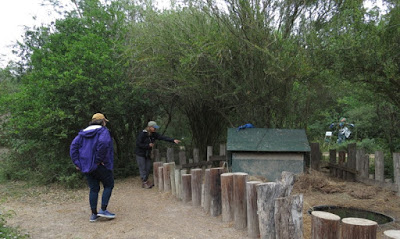 Liz points out some Chachalacas behind Spike's enclosure

It was still pretty quiet when we got there, but dutifully “marched” around the trail (as Alice Ann described their last visit) and enjoyed the statuary; near the back side a Carolina Wren started singing unseen, while the highlight was just inside the Ebony Grove Trail:  a pair of Curve-billed Thrashers whispering and chasing each other!  The rest of the trail was pretty dead (the draw was that sometimes I’d get sparrows back in there) except for a Chachalaca that seemed interested in Liz J, so we eventually made it to the VC (another opportunity to buy stuff) and chatted with staff naturalist John Brush a bit; Alice Ann had asked me if the Ebony Tree was “special” to any birds, and I remembered from one of John’s walks that the tree was very good for a variety of organisms, so I asked him to clarify, which he did! 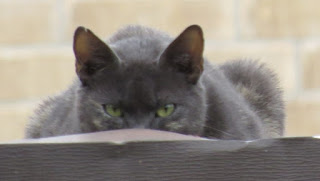 Cat giving us the evil eye 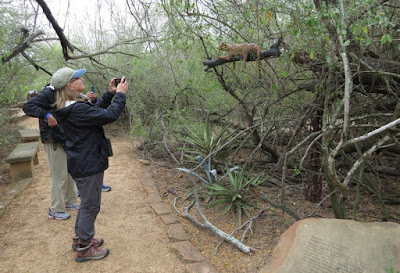 The girls enjoy the "fake" Ocelot! 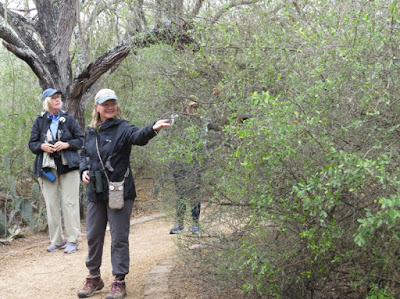 Liz tries to entice a Chachalaca to inspect her hand! 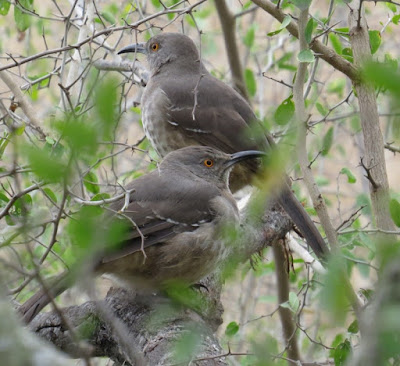 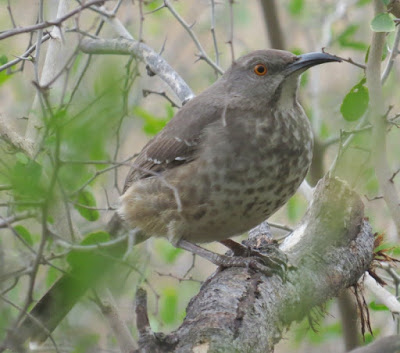 We went down Memory Lane as we passed the spot where the Green-breasted Mango hung out a few years previously (the girls thought they could have been there themselves the same day Todd and I went over to see the bird) and added a singing White-winged Dove to the list, but then headed out without anything else of interest.  From there we headed up to Edinburg Wetlands, where Becky told us that their Audubon’s Oriole was coming in quite regularly to the tray across from the entrance station!  So the girls gathered their picnic gear and we all headed over to the tables where we had an unobstructed view of the feeder!  Nothing but Cardinals and titmice came in while we were there, but a feral cat went prancing down the trail, and as Becky came out to try and shoo it away, the Audubon’s suddenly started calling!  He never did let us actually see him, but at least it was a good listen…  One of the titmice also had me fooled into thinking it was a House Sparrow at first – its song sounded just like that husky call the sparrow can make! 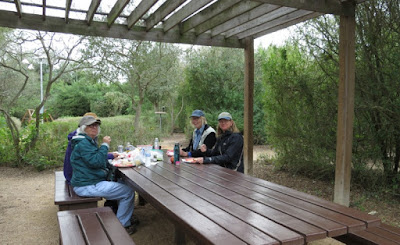 From there (after putting our stuff away) we made the loop, and had a beautiful male Lesser Goldfinch on the trail!  An interesting-looking Ruby-crowned Kinglet came in close (looked like he had “specs” more than a broken eyering, but the black wing bar assured us he was not a Hutton’s Vireo J), along with a White-eyed Vireo playing games.  Other than that it was quiet, but the North Pond had the usual array of egrets, grunting cormorants, a young White Ibis, an Osprey, a few Anhingas, and a single Black-crowned Night Heron.  There was also a pair of snoozing Mottled Ducks near the edge and some more Pied-billed Grebes and Coots, but no kingfishers… L  Both a Long-billed and Curve-billed Thrasher somewhat made up for that, though!  Walking back, we tried again for the oriole but had a couple of Purple Martins gurgle overhead instead.  After taking a group picture under the giant Great Blue Heron in the VC (instead of buying more stuff J), we headed south to Santa Ana. 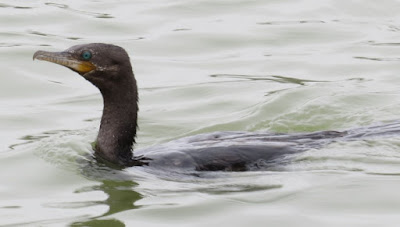 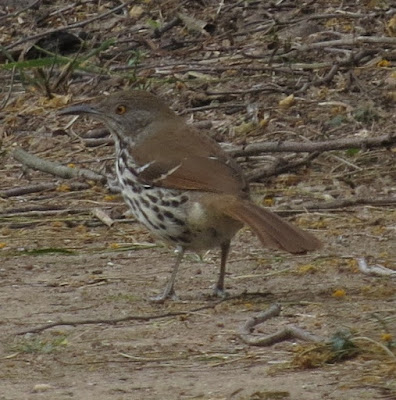 Long-billed Thrasher with his eye on something... 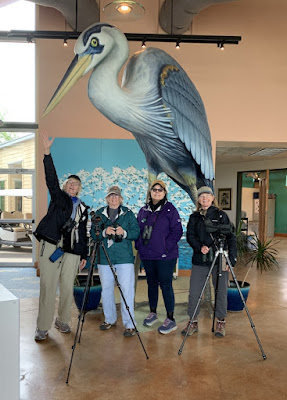 Jean, Alice Ann, Brenda, and Liz pose with the Giant Heron!
By now it was really quiet, and we were pretty bushed, but we first checked out the VC feeders where someone thought he had just had the Hooded Oriole, but nothing much came in while we were there, so we headed out on the Chachalaca Trail.  Virtually nothing was on the wooded part of the trail, but Willow Lake had some Least and Pied-billed Grebes (the latter was hooting) and a few ducks.  The Harris’ Hawk was across the way, and a Sora called unseen, but we soon heard the flight call of the Ringed Kingfisher, and most of us at least got a glimpse of him as he shot overhead, but we could never refind him.  Even the Green Kingfisher was gone from the culvert area, and except for another Clay-colored Thrush and a Yellowthroat that we really had to work for, things were quiet along the Pintail Lake Cutoff Trail as well.  Instead of circling the lakes we took the trail that continues straight to the first pond, and added stilts and several ducks to the list, plus the little Vermilion Flycatcher.  Tropical Kingbirds tittered off to the side, and both Barn and Rough-winged Swallows swooped and fluttered overhead, but it was still cool and overcast, and about that time we had to head back, so we dragged ourselves back to the car (the girls wanted to buy more stuff but the VC was closed) and headed out, adding a Cooper’s Hawk shooting across the entrance road as the (almost) last bird of the day (last one was a Starling…)!

Dragging ourselves away from Pintail Lake

The list wasn’t as long as Monday’s, but still respectable considering the weather, with 74 species for the day!  (And back at the Inn, the girls had a ball buying more stuff J!)  Bird list: