Met Matt and Jill, a delightful and fun couple from South Carolina (complete with accents J), outside the Inn Friday morning; they opted to drive as they were heading straight to the airport after the field trip.  They had already birded a few days before meeting me, but the initial itinerary I sent them still sounded good (they claimed to be very casual birders), so we headed straight to Estero Llano Grande as planned.  A Tropical Kingbird tittered from a wire along the entrance road to start the day, and for comparison we found a “pupping” Couch’s Kingbird in the Tropical Zone!  Sneaking by the park host area, we had various wintering things as well as the titmice (Matt and Jill loved to travel, so they had already bagged that bird in Fort Davis).  A Verdin that was calling refused to come out (as per usual), and the blind was also quiet as breakfast hadn’t arrived yet, but a Kiskadee and White-tipped Dove eventually came in for a look.  But the picnic table feeders were where all the action was:  Matt was hoping Jill could see the Chachalacas as she had missed them previously, and he got his wish in spades as the place was crawling with them!  They were even starting to get feisty, as a couple fluffed up and faced off, jumping up and down and all over each other!  More White-tipped Doves paraded across the floor seemingly unaffected by all the hoopla going on, while the Green Jays sat in the wings and made funny noises…

The screech owl wasn’t in his hole in the white shack this time, but as we made our way to the Visitor’s Center via the trail next to Ibis Pond, a nice Black Phoebe performed well, and just before the building an Altamira Oriole sat overhead!  Something shuffled noisily in the palm tree inches away from us before being spooked – a pair of Curve-billed Thrashers, another bird they really wanted to see!  Being a former hunter, Matt was particularly interested in the pretty ducks (teal were good eating; Shovelers weren’t…), and we had the  regulars to enjoy in Ibis Pond; one of them (I think it was Jill) asked about this close bird in the mud that was so camouflaged, and it was one of the several Wilson’s Snipes that had been reported!  What a look!  Matt was trying to get me on something way across in Avocet Pond when I suddenly noticed one of his other most-wanted birds, a Vermilion Flycatcher, sitting on a post!  That was pretty exciting! 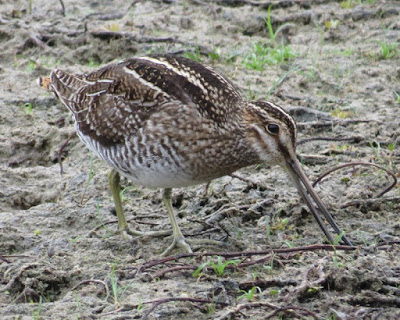 Heading over to Alligator Lake, we checked Dowitcher Pond and were able to nail down a couple of Cinnamon Teal, although still coming out of eclipse plumage.  Jill noticed a long line of something that turned out to be distant Snow Geese!  (Wanted to turn what looked like a smaller one in the lead into a Ross’, but it could have been an optical illusion…)  A small flock of Lesser Yellowlegs flew by, and at Grebe Marsh we enjoyed the pond’s namesake as finally a Least Grebe stayed on the surface long enough for Jill to see him! J  As we approached Alligator Lake I heard the tick-ticking of the Green Kingfisher and were thankfully able to spot him across the way!  (We all agreed that some of the standard descriptions, like “sounds like a typewriter,” may not compute with the younger generation… J)  The night herons showed well, and a gentleman walking his dog cottoned us onto a White-tailed Kite perched in plain view at the “little overlook”!  (The kingfisher blasted over to us and ticked annoyedly as if to say, “Hey, don’t look at him – lookit me!” J) A Neotropic Cormorant flew over, showing the long-tailed shape well, and thankfully we found the Pauraque right away, which elicited the proper ooos and ahs!  A Ringed Kingfisher machine-gunning in the distance made me run back to the open area, but he was too distant to spot…  At the “big overlook” a nice male Anhinga posed, a bird both beautiful and ugly at the same time, they said! 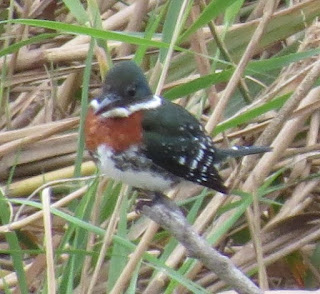 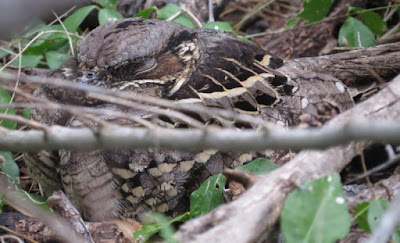 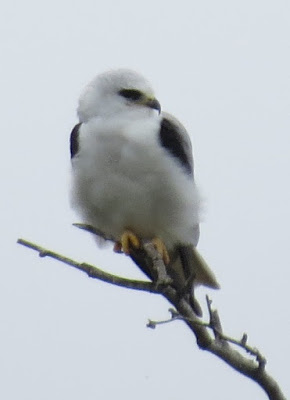 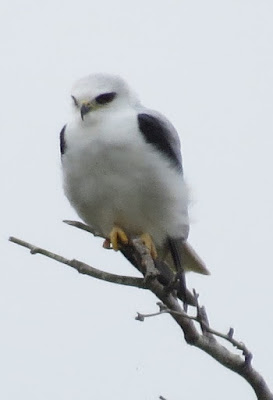 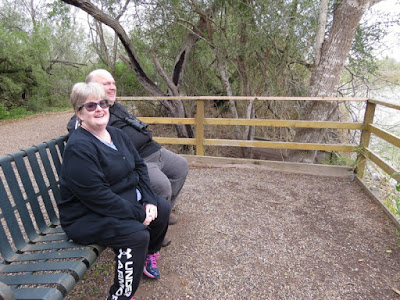 Jill and Matt at the "Little Overlook" 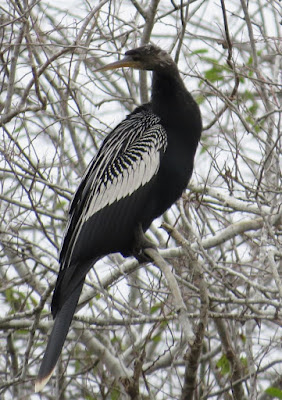 
We made our way back to the Visitor’s Center, enjoying some close-up Least Sandpipers on the shore of Dowitcher Pond (and later Ibis Pond), plus the Spotted Sandpiper that always seems to be there!  We and sat at the feeders for awhile, and thankfully the Buff-bellied Hummer came through!  A Lincoln’s Sparrow skulked on the ground (Matt got to see it but I think Jill missed it L), and when we checked the ponds again an Eastern Phoebe was over where the Vermilion was before. On the way to Progresso, what should be sitting on the wire over the actual Estero Llano than the Ringed Kingfisher!  We made a Uie and everyone had a great view – he’s getting to be a regular at that spot!

Green-winged Teal (male above, females below) 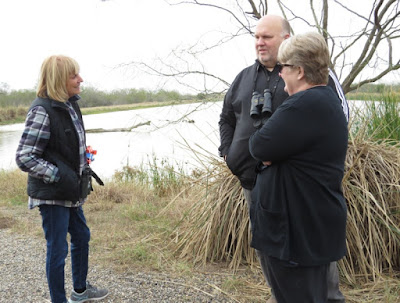 We run into long-time Alamo Inn Winter Texan Kathy on the way back! 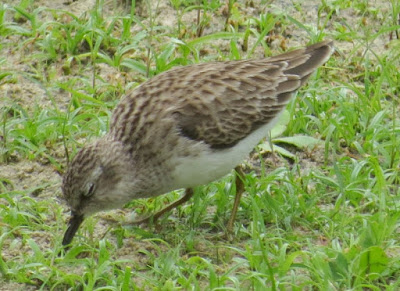 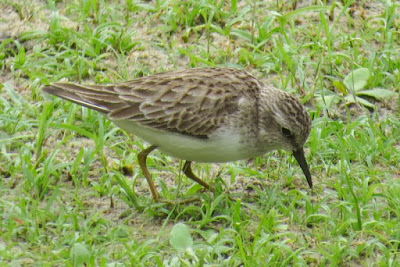 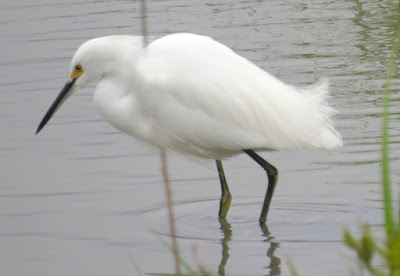 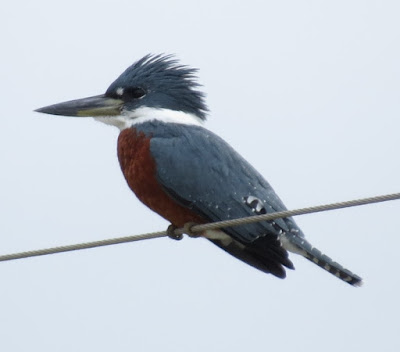 When Matt mentioned that he really wanted to see whistling ducks, I texted my friend Dan Jones and asked if we could drop by, as his resaca is the whistling duck capital of the Valley!  We had barely stepped out of the car when we saw the mob in his back yard instead of across the resaca in the neighbors’ yards! J  Dan himself shortly came out with his scope and encouraged us to go on back while he set up shop and started scanning.  I ribbed Matt and said, “You wanna see whistling ducks?” and pointed him towards the lawn down the way on the opposite side that was just carpeted with ducks – Matt and Jill were duly blown away! The feral Muscovies got logged, and Dan spotted a Red-tailed Hawk perched on a pole.  Both Caspian Tern and Rough-winged Swallows flew over (the latter was Dan’s first for the year), and we added a chipping Yellow-rumped Warbler in his awesome butterfly garden. 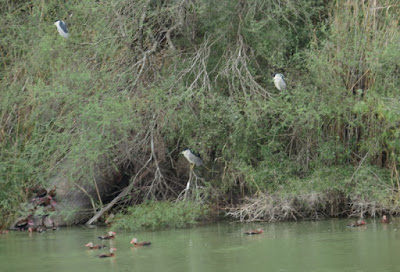 ...always has lots of cool birds! 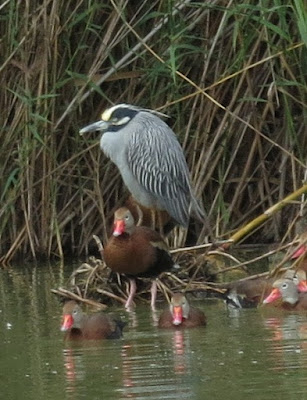 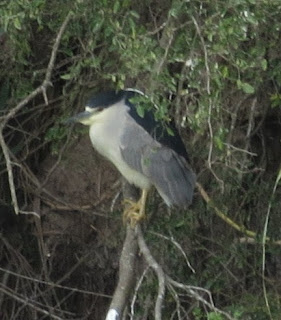 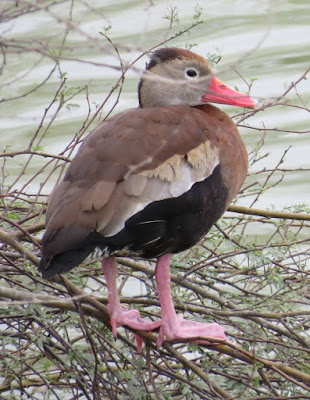 After kissing Dan goodbye we headed over to the Progresso Silos, as Bronzed Cowbird would have been a life bird.  We had Inca Doves going in, and of course tons of redwings, but as we turned south on a dirt road we found several Bronzed Cowbirds right outside the car, and one male even did a little bit of The Helicopter!  Continuing down, we were able to pick out a handful of Yellow-headed Blackbirds in the mix, as well as Brown-headed Cowbirds.  Heading north on another dirt road, we had a pale buteo that could have been a Krider’s Redtail, but I just didn’t get a good enough look to tell as it flew by…  We took a slight detour eastbound on US 281 to enjoy a nice Harris’ Hawk on a pole! 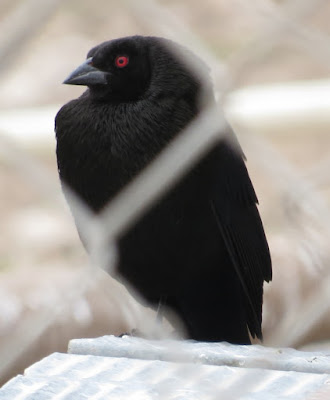 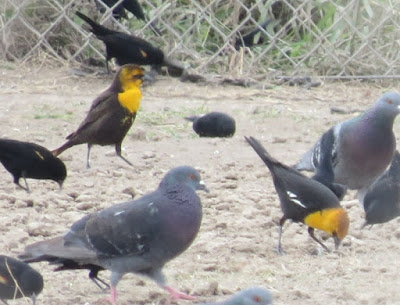 A couple of Yellow-headed Blackbirds hide amongst the mob 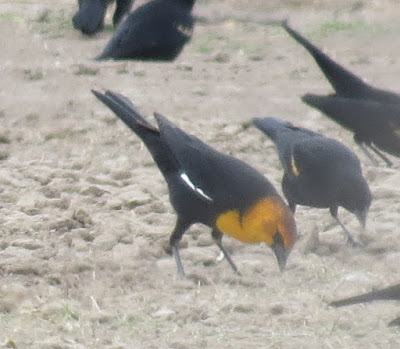 Matt had mentioned in passing that he had never seen a Peregrine, so after a requisite stop at Stripes (when I mentioned it in my e-mail, he thought I was talking about some fancy restaurant J), we made a stop at Tower Road on the way to Anzalduas, and thankfully he was on the water tower!  Since they were also looking for Horned Larks and both pipits, we continued up Tower and came back on Border, just to see if we could kick up anything in the ag fields; nada in the target department, but we did see several Long-billed Curlews and Savannah Sparrows, plus a couple of Coyotes running into the sugar cane fields.  Dipped on the Burrowing Owls (thankfully they didn’t really need that one), but the big show was a tremendous cane burn that was so big it was generating its own cumulus clouds! 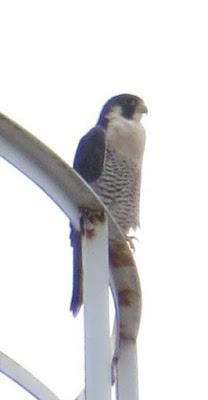 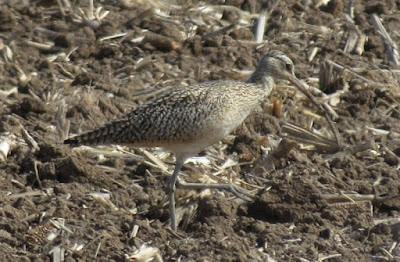 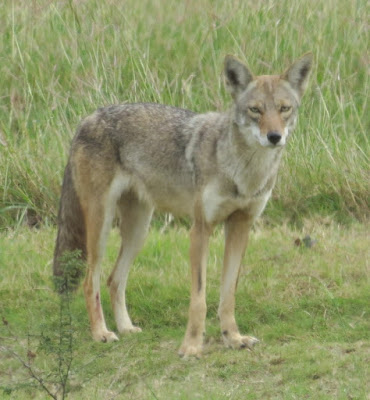 Anzalduas was next, and it was clear the Hawk Show was over, as we only picked up a couple of Great Blue Herons in the field north of the park (which they still thought was pretty cool).  Bagged the Vesper Sparrow along the entrance road, and the Say’s Phoebe was still on his pole in the big field, as well as the Green-winged Teal in the spillway!  We parked past the entrance building and started the Pipit Poke through the field, and this time I took Father Tom’s advice and went slower than usual (I never see the things until they flush L)!  Jill spotted a couple of small birds bouncing around not too far away; one was definitely a Savannah Sparrow, but the other one looked suspicious, and when I got the scope on it, it did indeed turn out to be the Sprague’s Pipit!  Everyone got great looks (still not sure I would have spotted the thing before flushing it…)!  There were also lots of Western Meadowlarks of course, and walking over to the Rio Grande we added coots and Lesser Scaup, plus another Ringed Kingfisher!  Lots of Tree Swallows were swooping around as well. 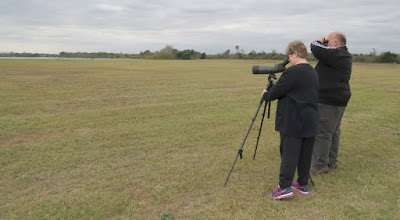 Jill spots the Sprague's Pipit (below)! 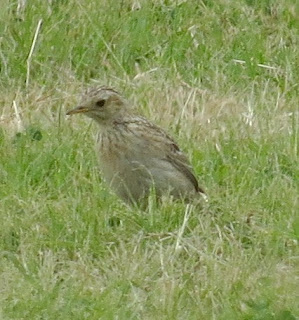 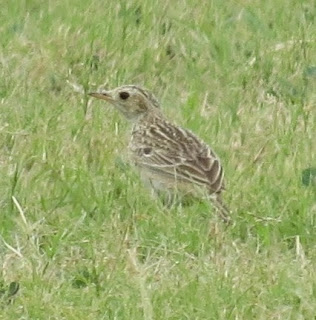 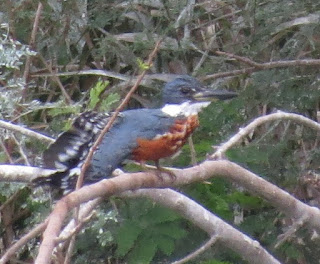 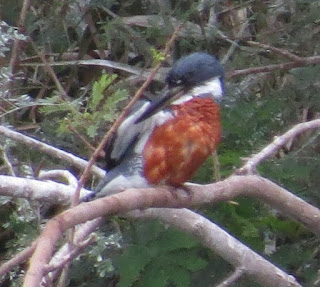 Made our way back to the car and continued on; turning the corner we ran into another group that was staying at the Inn who were looking at a bird they thought might be the Say’s Phoebe (it was a female Vermilion Flycatcher – depending on the plumage that can be an easy mishap), and in turn they told us about the Eared Grebe, which would have been another lifer for Jill and Matt!  So after pointing the way they took off on their own Pipit Poke while we finally got looks at the grebe when it wasn’t diving!  Also in the mix was a single female Ruddy Duck and several Least Grebes.  The resident Osprey was enjoying lunch until the kingfisher came over and started harassing him, and a feeding flock had a brilliant male Vermilion Flycatcher (probably the same one we had with Selimah and Elizabeth, but it rightfully wowed Matt and Jill)!  A lone Cattle Egret was on the raft in the middle of the river, and another Black Phoebe was at the boat ramp.  The Tropical Kingbirds were near the “Government Area” as before, and a single Gadwall was in the river as we approached the dam.  Rock Wren was indeed a life bird, and after warning them that it took some people two hours to get the bird (they weren’t willing to wait that long, understandably), we parked, stepped out, and there was the silly Rock Wren sitting right on top of the barbed wire!!  Couldn’t believe it! 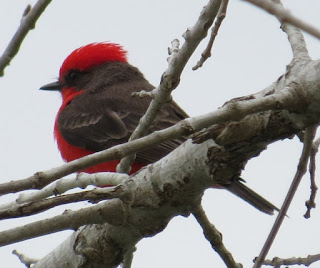 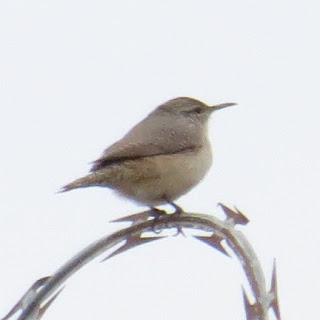 From there we headed home, adding House Finch to the list and pointing out a Green Jay doing a Gray Hawk scream... J    On the way over the levee we spotted a distant Caracara flying by, and we made a brief stop in Hidalgo for the Monk Parakeet (singular, although a flock blasted over on the way there that could have been either species, I suppose…). 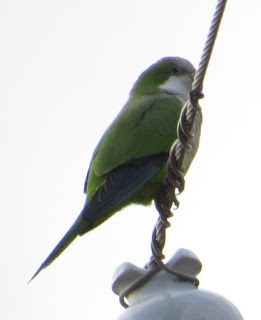 We had a great time sharing local idioms (they had never heard the term “grouse” – as in “complain” – before), and ended the day with a respectable 95 species!  Bird list: