Boy, what a change from the day before! L  The cold front came through with a vengeance, and thankfully we weren’t heading to a destination that involved a lot of hiking!  We headed west towards Starr County, and while the first planned stop was Salineño, it was actually misting by the time we got to the turnoff, so I decided to take us down the Chapeño Road where 15 Red-billed Pigeons had been reported the day before!  We crawled along the road going in just to make sure we didn’t miss any good thornscrub birds, but it was so windy that what did chirp just didn’t wanna come out (although a Caracara seemed to enjoy being blown around)!  We got to the bend in the road and saw a couple of other vehicles at the other end, which prompted the story of the owner of El Rio RV Park warning us (on a previous trip) not to go down to the boat ramp because there was some “activity” going on! L  Turned out to be other birders, who hadn’t seen hide nor feather of the pigeons, so we also turned around at the end, only to see the whole crowd in one of the vehicles pile out ahead of us and get their scope on something!  I immediately pulled up behind them and jumped out, asking the leader, “Did you find one?” to which he replied, “Oh, no – we’re from Seattle and this is our first day here, and everything’s new!”  (Turns out they had the scope on a Golden-fronted Woodpecker at the top of a pole… J)


So since it had obviously stopped misting we headed back to Salineño, seeing a Javelina cross the road but dive into the scrub before Jan could get a picture (and wonder out loud if we’d ever see any more…).  Since Jan’s main interest was photography, we went straight to the feeders and spent about an hour there all bundled up – Lyn was a trooper, as it was freezing cold (especially when a gust went through, turning up little mini vortexes in the dust)!  But the feeders were going bonkers with the regulars:  Kiskadees were making repeated strafing runs at the peanut butter mixture, and we didn’t have to wait at all for Green Jays, Cardinals, Black-crested Titmice, and Altamira Orioles!  I was glad to see the Olive Sparrow come in, as Jan had missed that one the day before, and the Long-billed Thrasher also gave fleeting views.  Chachalacas kept to the back this time, along with hordes of redwings and grackles (there weren’t as many doves as usual, either).  The Ruby-crowned Kinglet was back (Mike confirmed that this was the first winter they had braved coming to the feeders), along with several Orange-crowned Warblers and a brief visit by a Bewick’s Wren.  Thankfully the male Ladder-backed Woodpecker put on a good show (another one we kept missing yesterday), and the Golden-fronted showed once or twice.  The Audubon’s Oriole hadn’t shown by the time my timer went off, but Jan was cold enough that he wanted to walk the trail to warm up, so down we went! 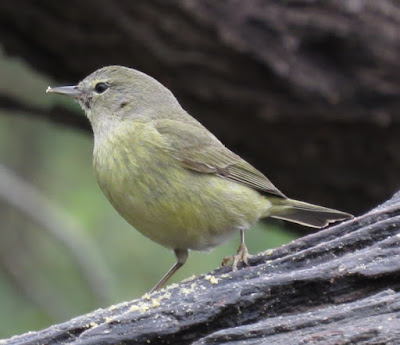 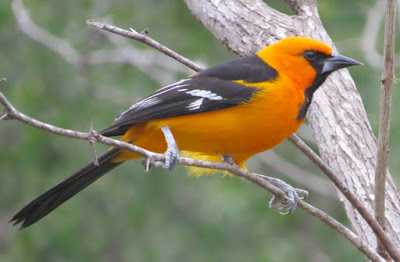 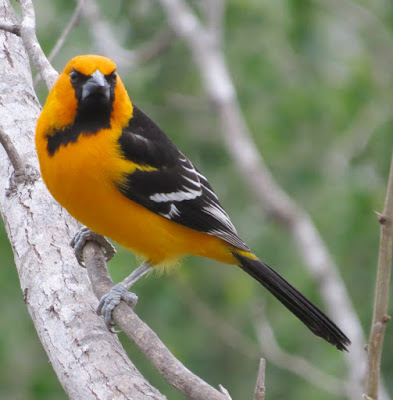 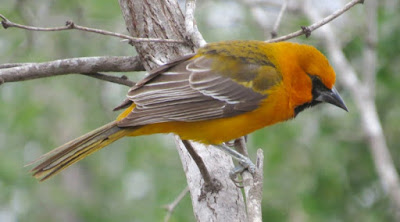 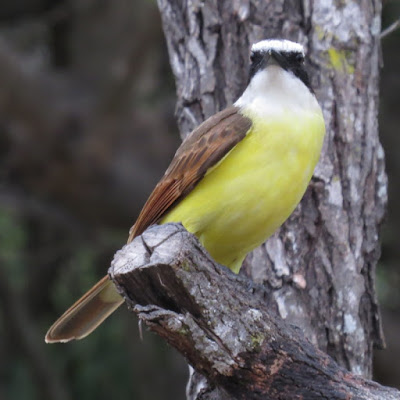 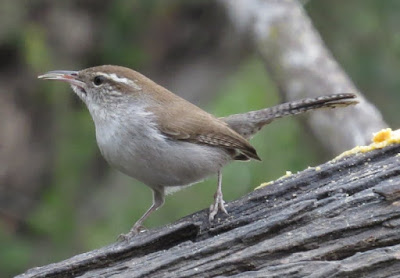 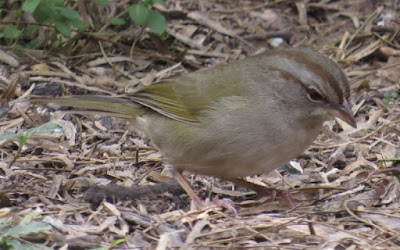 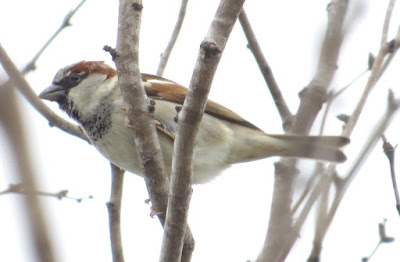 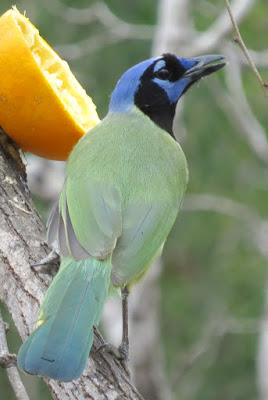 And exercise was about all we got, as the trail was pretty birdless!  Mike had told us where he had seen Barn Owls, so Jan was interested in taking a look; we scrambled up the hill and towards the area he described, but we didn’t see any owls (I didn’t really expect to, as another gentleman had gone up earlier and come back empty), but we did see an Osprey with breakfast on the way back!  A flyby Double-crested Cormorant was the only other bird we added until we got back to the car, when suddenly I heard the sad whistle and Scrub Jay-like shack of the Audubon’s!  Turns out there were four of them in the tree right overhead, but very uncooperative for pictures, so we decided to head back up to the feeders in hopes that that’s where they were headed!

Lyn and Jan at the cul-de-sac 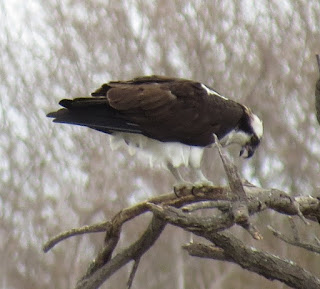 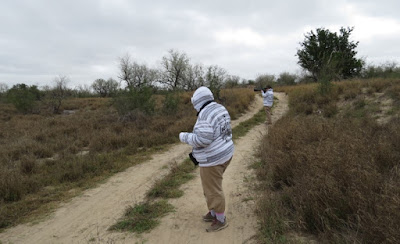 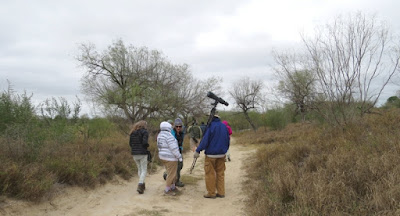 Chatting with other birders

It wasn’t long after we settled back in that the group from Seattle showed up, so we all enjoyed our lunches while the birds continued to enjoy theirs!  One newcomer that broke up the party was a Roadrunner who suddenly exploded from the side and went after something that was on one of the logs (don’t think he got it)!  Merle (I think it was) mentioned he had gotten a House Sparrow previously (the Roadrunner, not Merle J)…  But it wasn’t long before we heard the Audubon’s behind us, and suddenly he was there on the log, along with his mate (and yes, it was “Baldy”)!  The only regular we had missed was the Clay-colored Thrush, and indeed he returned just as we were leaving (we were already on the road when Mike called us back), but having gotten that bird in Costa Rica Jan was keen to check out the birds at a specific campsite at Falcon State Park that Mike had told us about! 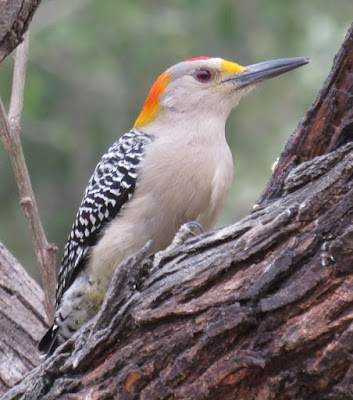 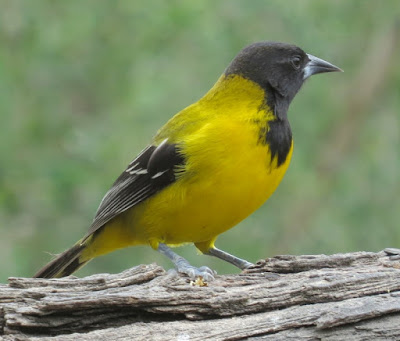 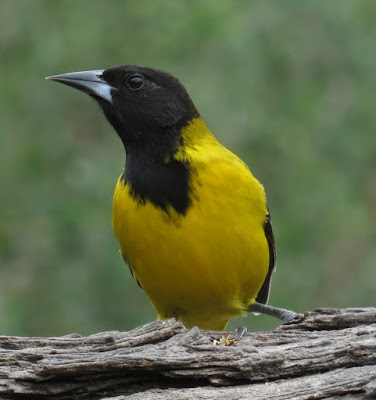 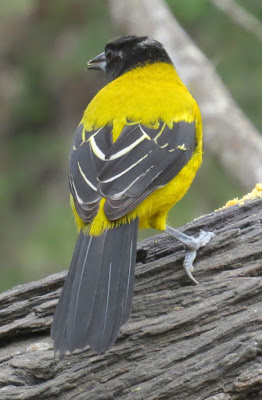 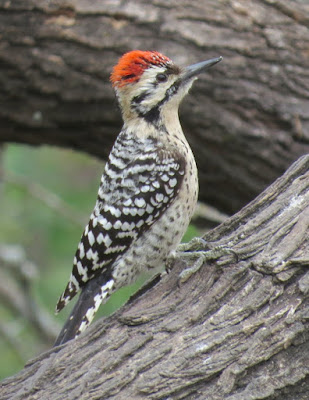 So we headed straight there, picking up a fleeing Gray Hawk going up the dirt road and a White-tailed Hawk after getting our pass at the state park, then found the campsite in question with a covey of Bobwhite in the guy’s “back yard”, scratching away (Jan likened it to the native dances he’d seen)!  An adult and immature White-crowned Sparrow were closer to the road, which I personally was thrilled about, while a Lincoln’s hopped around about halfway between the two birdy spots!  A truck had quietly come up behind us and was polite enough not to honk at me J, so we skedaddled over to the restrooms and parked, and while Lyn huddled in the car Jan and I walked back towards the campsite.  Suddenly we surprised a pair of Javelina in a vacant campsite, and I was a little concerned because the one (presumably the male) had his back hair raised a couple of times, but they calmed down and Jan was able to get his coveted shots!  (Another guy with a camera came past us, and Jan was nonplussed that he waved off the Javelina as though they were no big deal – they actually are pretty easy to see there…)  Back at the campsite we waited for the Bobwhite to come back, and this time they were joined by several Inca Doves and a single Common Ground Dove (that I discovered in the pictures later)!

White-crowned Sparrow doing the "Towhee Shuffle" while Jan comments on capturing the Bobwhite scratching away! 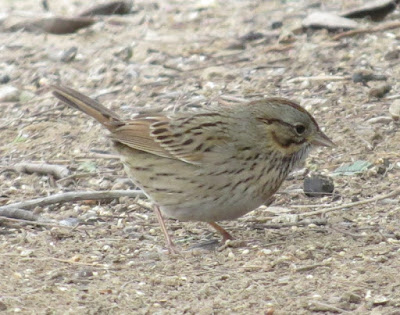 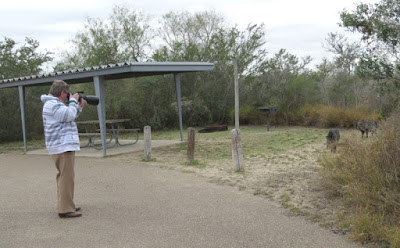 Jan shoots the Javelina (Collared Peccary) pair we surprised (below)! 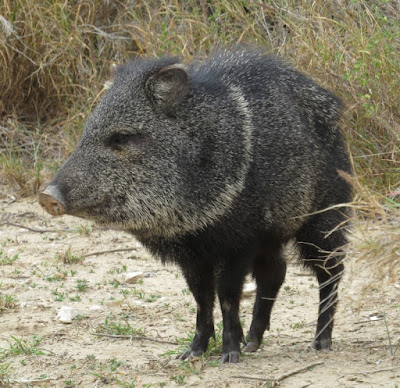 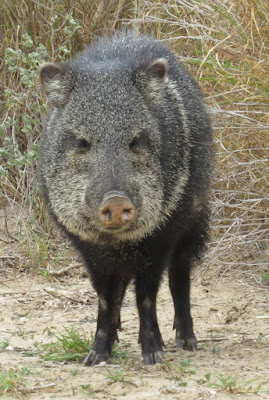 It was almost time to leave, so we just cruised with what little time we had; not even a Pyrrhuloxia showed its face this time (and thankfully they had gotten that one in Arizona)!  But as we headed towards the boat ramp we spotted a Roadrunner right out Jan’s window, so I swung around and started messin’ with him, and definitely got a reaction (Lyn was especially taken with his red ear patch)!  He decided to sun for awhile, which was a behavior they had never seen, so that was fun!  After one last “mess” the bird came over to my side (right under the window, actually), then decided he had had enough and went running off into the brush… 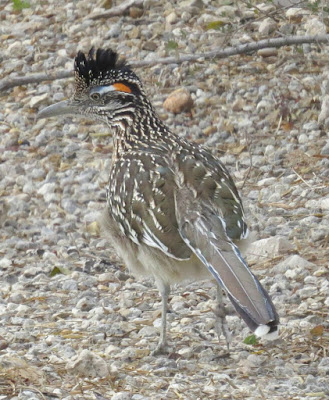 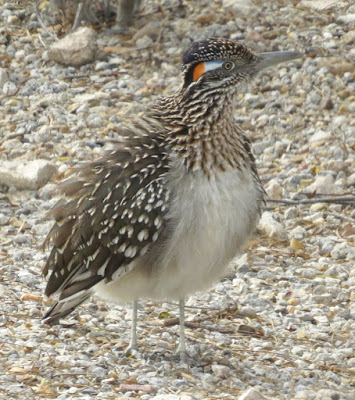 Sunning (note the fluffy back feathers) 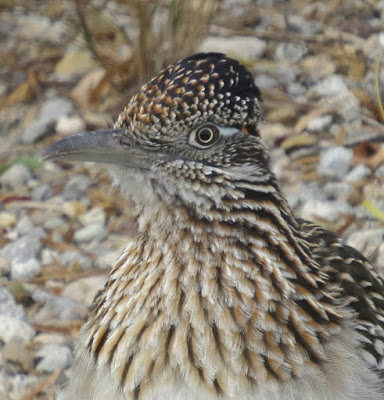 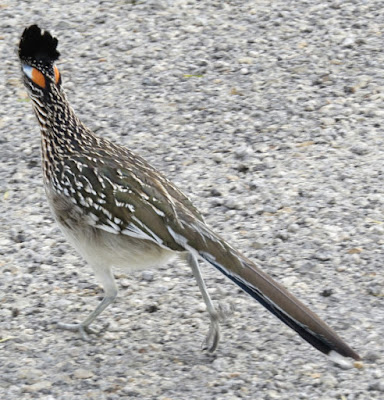 It was definitely time to go home after that with a meager 43 species for the day, but considering the blustery weather (and the sun was finally coming out by the time we had to leave L), it wasn’t bad – we did have some excellent quality encounters!  Bird list: