The Four Chachalacas do the 2020 Frontera Birdathon

Pat and I met Alicia and Sue at the former’s house bright and early, and after a fruitless search for Pauraques at the end of Alicia’s road, we headed out to South Padre Island in order to bird The Flats before the Kite Event started, enjoying a gorgeous sunrise on the way there!  Our first bird was a Mockingbird at the Stripes in Laguna Vista, followed by an Osprey (2) along SR 100, a Brown Pelican (3) seen from the causeway, and Laughing Gull (4), Rock Pigeon (5), and Great Blue Heron (6) on the way to The Flats.  The birds were way out there, and even though Alicia’s SUV was high-clearance, it wasn’t four-wheel-drive, so she was understandably hesitant to take the car closer to the birds!  But as we scanned the flocks, the White Pelicans (7) were the most obvious birds, and we were able to pick out a Ring-billed Gull (8) amongst the Laughers.  There were so many Black Skimmers (9) that eBird flagged Sue’s count of several hundred!  Caspian Tern (10) was the first of that group, and we were able to spot some Red-breasted Mergansers (11) out in the surf!  As we continued scanning the beach and the bay, we added Willet (12), Royal Tern (13), Sanderlings (14), Coots (15), calling Short-billed Dowitchers (16), a fly-by Mottled Duck (17), and several Dunlin (18, that also thankfully called for good measure as they were awfully distant).  Plovers were tough, but we managed Semipalmated (19), several Black-bellied (20), and a single Snowy (21) that thankfully Sue also saw (the rule is that at least two members of the team have to see or hear the bird).

Part of the skimmer mob (with a White Pelican)


We bypassed the Convention Centre in favor of the Birding Center (assuming the CC’s boardwalks were still closed), picking up Great-tailed Grackle (22) in the parking lot and their mascot feral Muscovy (23) on the way in!  We checked out the garden area first, adding a calling Kiskadee (24) and a skulky Long-billed Thrasher (25) that we checked carefully to ensure it wasn’t a lost Brown, as one will periodically show up here!  We added Orange-crowned Warbler (26), Ruby-crowned Kinglet (27), and a Cardinal (28), and while I heard the Wilson’s Warbler (29), the girls finally got a brief glimpse of yellow!  I heard Black-bellied Whistling Ducks (30) in the distance, but it wouldn’t be until after the boardwalk loop that we would actually see them on the retention ponds! 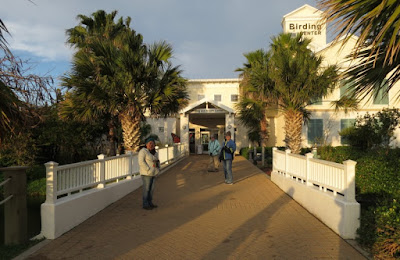 Alicia, Pat, and Sue (three of the Four Chachalacas) heading into the Birding Center

Making the loop, we quickly added Snowy Egret (31), Green Heron (32), beautiful Redheads (33) shining in the sun (and I noticed how their heads do indeed look black until the sun hits them just right), Great Egret (34), the freeloading Common Gallinules (35), and the wintering Belted Kingfisher (36).  Alicia spotted a Tricolored Heron (37) and White Ibis (38) hiding over in the mangroves, and a Pintail (39) occupied its own little pond.  A Yellow-crowned Night Heron (40) was also in the mangroves, and out in the bay a couple of American Wigeons (41) were in with the Redheads.  At one of the Bird Blinds some Long-billed Dowitchers (42) flew by peeping, and I was thrilled to spot a Common Loon (43) flying by, as they can be tough to get (I barely got it for the year in 2019)!  Somewhere a Long-billed Curlew (44) called, and a Turkey Vulture (45) rocked overhead, while a Yellowthroat (46) called in the wetlands and a Cooper’s Hawk (47) blasted through!  A Red-winged Blackbird (48) flew overhead while a Pied-billed Grebe (49) sat placidly and a Little Blue Heron (50) drifted by.  Out in the “East Pond” the Roseate Spoonbills (51) came through (and we also saw that apparently the CC boardwalks are now open, as there was a guy on the parallel walkway)!  Also in the pond were Black-necked Stilts (52), Blue-winged Teal (53), both Lesser (54) and Greater Yellowlegs (55), and a weird-looking Shoveler (56) that we first thought was a hybrid Pintail/Mallard that had been reported!  We picked up an Eastern Phoebe (57) on the way out, and a Double-crested Cormorant (58) up on a pole in the parking lot. 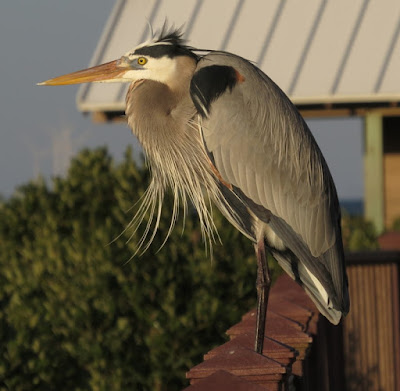 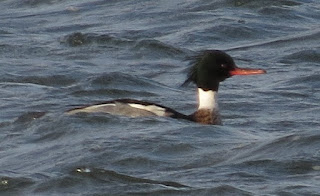 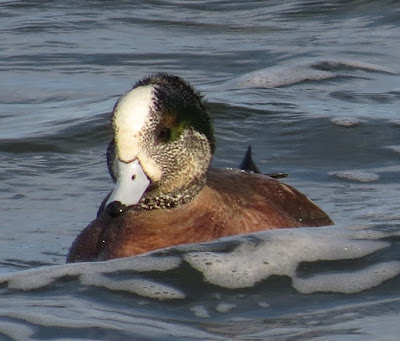 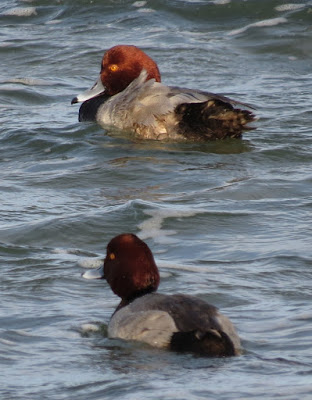 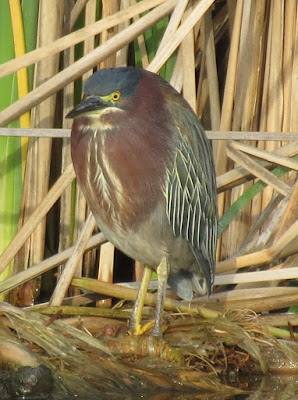 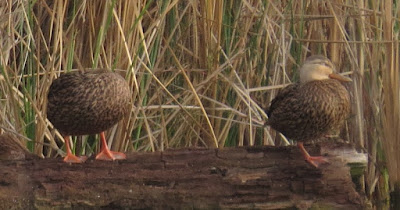 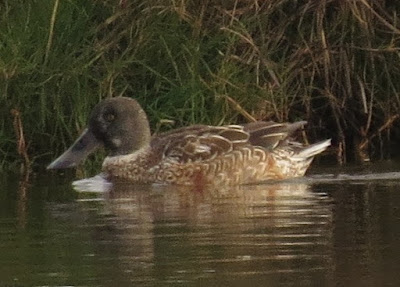 Shoveler in what is apparently a retarded eclipse plumage 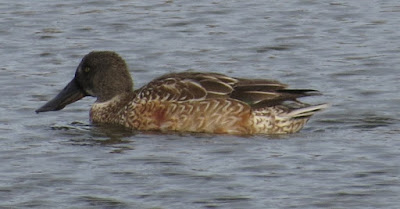 We quickly checked out Sheepshead, logging the Eurotrash Collared Dove (59) and Starling (60) on the way, along with a not-so-trashy Loggerhead Shrike (61)!  Sheepshead was pretty dead (they had turned off the back water feature that the waterthrush likes, and had also cleared away a lot of the thick habitat back there), but we at least added Inca Dove (62), Tropical Kingbird (63), and House Sparrow (64).


The Highway 48 Boat Ramp was next, where we added Kestrel (65), Harris’ Hawk (66), and Caracara (67) on the way.  Once there we added a nice selection of species, including Herring Gull (68), a white morph Reddish Egret (69), several Ruddy Turnstones (70), the requisite Oystercatcher (71), several Avocets (72), and both Forster’s (73) and Gull-billed Terns (74).  We found a Spotted Sandpiper (75) bobbing along, and several Least Sandpipers (76) that blended in very well with the mud!  Continuing south we added a Harrier (77) hunting over the fields.


Medford Pond was next, where we added a brilliant Vermilion Flycatcher (78), a Golden-fronted Woodpecker (79), and both Lesser Scaup (80) and Ruddy Duck (81) in the pond itself.  But the big show there was the hordes of Laughing Gulls dipping down for a drink and then settling on the pond!  Several Green Jays (82) bounced around, and managed to add a Curve-billed Thrasher (83) as well. 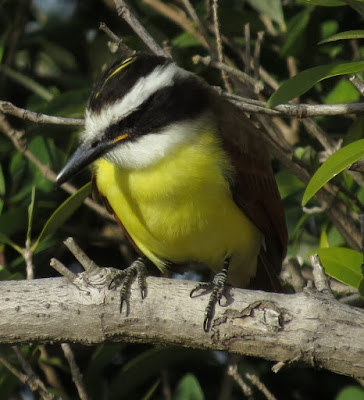 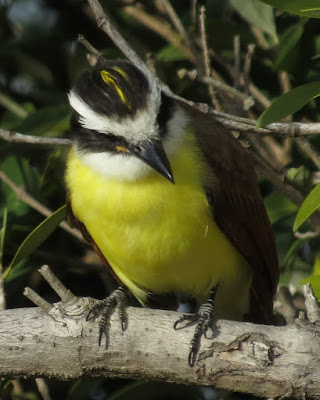 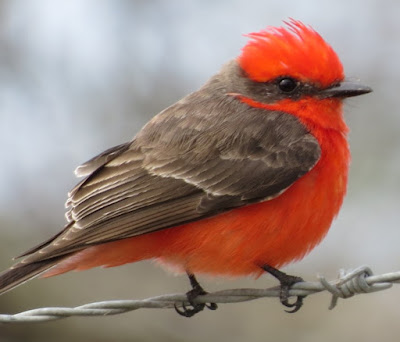 On to Sabal Palm Sanctuary, where we added a Red-tailed Hawk (84) on the way.  Once there we picked up more “bitty birds”, such as House Wren (85), Ladder-backed Woodpecker (86), White-eyed Vireo (87), Black-crested Titmouse (88), Carolina Wren (89), and Yellow-rumped Warbler (90).  We heard a Red-shouldered Hawk (91), and a pretty adult Gray Hawk (92) showed well on the way in (we had a nice immature on the way out).  Blue-gray Gnatcatcher (93) was another little guy added to the list, but because I had to use the restroom, I missed the White-tipped Dove (94, which I saw later) and the Olive Sparrow (95, which I didn’t L) at the feeder area.  We went straight to the big blind after that, where thankfully there was some water!  We were able to add a Lincoln’s Sparrow (96), but the big prize was a Swamp Sparrow (97), a lifer for Sue!  We also added a whistling Altamira Oriole (98) and fluffy-butt Least Grebe (99), but the honor of bird #100 went to the subtle but handsome-in-its-own-way Gadwall. 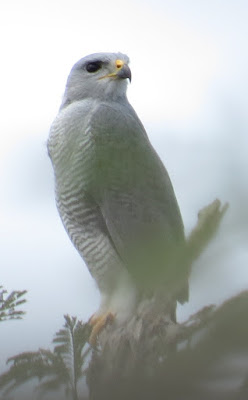 Adult Gray Hawk on the way in 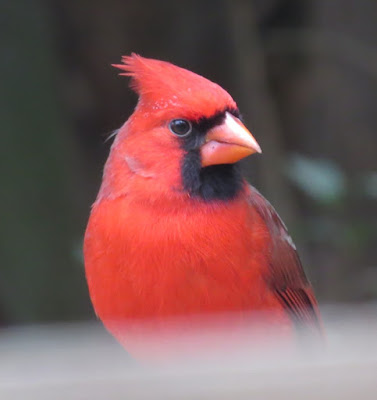 Cardinal at the feeders 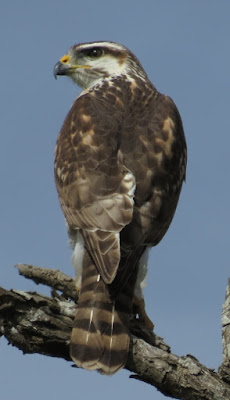 Immature Gray Hawk on the way out

From there we headed over to the UTRGV campus in Brownsville to try for the Common Black Hawk, which had been seen earlier by our friends Baceliza and Alan (and a bunch of ACAS folks I found out later J)!  By that time things were very quiet, but we at least added Neotropic Cormorant (101) and lots more feral Muscovies!  We contacted Baceliza to find out exactly where they had the hawk (which was nowhere to be seen), but she also told us about a sapsucker and some other goodies on the way to the other resaca, so we headed that way behind the building, and sure enough, there was her Yellow-bellied Sapsucker (102) up in the tree! Continuing on we picked up a couple of House Finches (103) on the lawn (not flaggable in Cameron County), and not only the reported Black Phoebe (104) at the other resaca (definitely flaggable in Cameron County) but a Solitary Sandpiper (105) to boot! 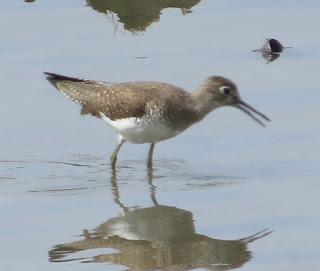 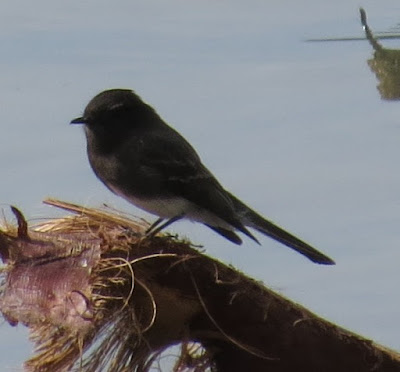 From there we inspected Old Port Isabel Road only to the gun club; no Aplomado, and we only added Mourning Dove (106) and Savannah Sparrow (107) for our efforts (I think the wind was picking up by then), so we headed up to Hugh Ramsey, picking up a flock of Green Parakeets (108) on the way!  The target here was a lost Audubon’s Oriole that Alicia had seen recently, but he never showed, although we were able to add Buff-bellied Hummer (109), Clay-colored Thrush (110 – I missed that one, too, also due to a restroom break L), and a Green Kingfisher (111) over by his regular spot. 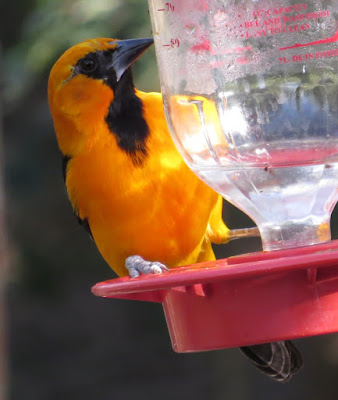 
We had received a couple of RBA’s on our phones about a Dusky-capped Flycatcher and Rose-throated Becard seen at Resaca de la Palma State Park, so we stopped there on the way to Oliveira Park (I heard an Eastern Meadowlark going in, but since I was the only one to hear it we couldn’t count it for the official list); we barely made it in before closing (in fact, Alicia had to go move her car and picked up Chachalaca – 112 – and Turkeys – 113 – in so doing), and a hike down the Ebony Trail produced no rarities and nothing new.  But the good news is that as we pulled out of the park, the Turkeys were along the road and put on a great show, gobbling to beat the band whenever Alicia honked the horn! J 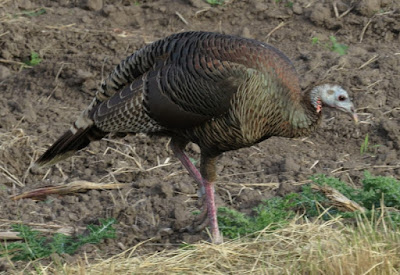 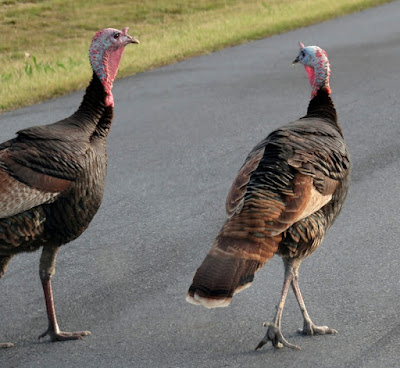 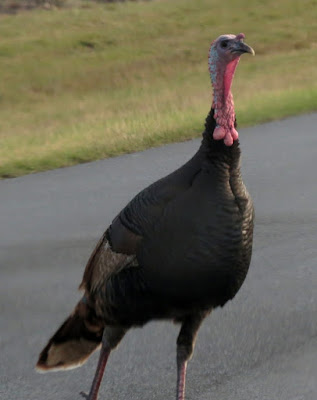 On to Oliveira, picking up a White-tailed Hawk (114) on the way.  While we waited I heard a Yellow-throated Warbler (115) chirping, so that was a fun addition, and eventually the parrots came in in droves, mostly Red-crowned (116), but also the White-fronted (117); sadly we weren’t able to pick out Red-lored or Lilac-crowned, and the Yellow-headed, if present, would have been obvious.  We were treated to a gorgeous sunset at the end! 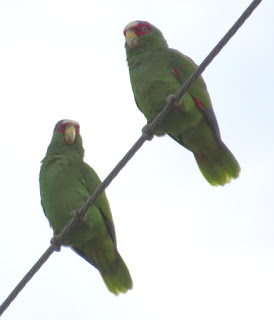