Selimah had sent me an updated target list after our first trip, so that enabled me to really sit down and plot out the best places for her to bag some of them!  Thankfully the initial place I had planned on taking them this day, the La Sal del Rey Route (aka Brushline Road, only it’s really a lot more than just that), had the potential of nailing down a big number of them!  Unfortunately, “potential” is the operative word here, and for the first time in my recollection doing this route, we dipped on the most-wanted Sandhill Cranes (plus the two common geese) L!  But it was a beautiful, sunny day, and she was able to photograph some of the more specialized birds!


We had a good selection of raptors, with a White-tailed Kite and Osprey on the way up along FM 493, along with several Red-tailed Hawks and Caracaras.  We started on Brushline south of SR 186, where while picking up an errant beer can Elizabeth found some intact animal bones and had Selimah identify them!  It was unusually quiet for the longest time; Selimah and I walked the road a little trying to get things to come out, and what I thought was a sapsucker initially (by voice) started sounding more like a Cooper’s Hawk, and we eventually saw it fly off!  The first target we were able to pin down was a cooperative Curve-billed Thrasher (which eventually got bullied away by a Mockingbird), and then the Lark Sparrow, as several were snorting away in the trees and then moved en masse to the fields!  A Vesper Sparrow joined them, and Mourning Doves were out the yin yang, with a few Common Ground Doves thrown in.  At the “Spooky Swamp” what I assumed was a Harris’ Hawk at first (as that’s what’s usually there) turned out to be a young White-tailed Hawk, and a Sharp-shinned Hawk put on a good show.  While we were stopped for something I heard a Bobwhite doing its covey call in the distance, and Selimah spotted a couple of Roadrunners up the road (that wouldn’t let us get all that close)!  I heard Horned Larks in the ag fields, but none of the coveted American Pipits…  Blackbirds, however, were all over: they flew in great, impressive murmurations (at least until I got the video camera out L) and we were able to pick out both Brown-headed and Bronzed Cowbirds at different spots. 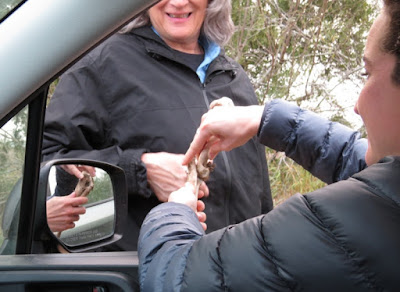 The vet analyzes some roadside bones! 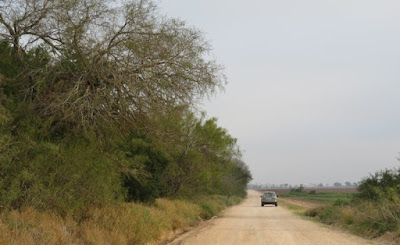 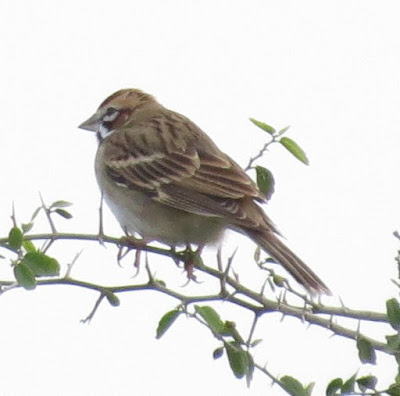 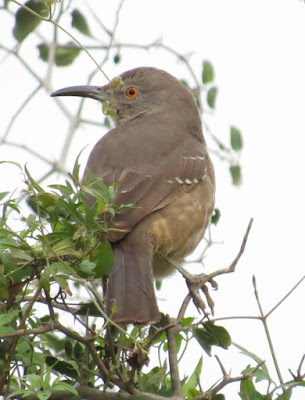 Brushline north of 186 was a little more birdy:  Verdins were calling all over, and in short order a much-wanted Pyrrhuloxia finally came out on the sunny side, allowing for wonderful pictures!  A Bewick’s Wren sang and showed itself for Selimah, at one point she thought she was hearing a frog, but we narrowed it down to a Green Jay… J  We parked at the trailhead for the actual La Sal del Rey, and as we started down the trail we had a little feeding flock with Yellow-rumped Warblers, gnatcatchers, and titmice.  However, a couple of suspicious-looking guys who followed us on the trail (and were not birders) sent us back to the car prematurely (thankfully Snowy Plover was not a lifer…). L

Mom and daughter checking out the brush 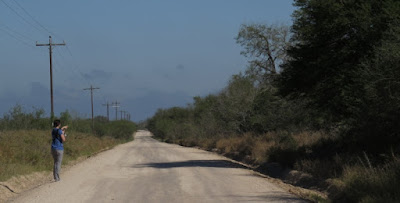 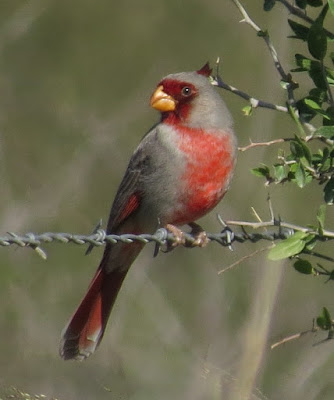 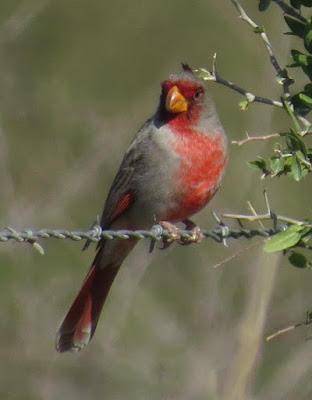 Continuing on, we paused across from Tres Presas Ranch to troll for Cactus Wrens and Black-throated Sparrows; a Curve-billed Thrasher sat up to look us over, but it took awhile for the wren to pop up, and even then Selimah barely got a look as they flew across the road to our side!  She got out and stalked them, but they played Switcheroo with the thrasher and that’s what she ended up shooting! L  A Black-throated Sparrow was singing in the distance, however, and he eventually did come in and give great views and photo ops!  Some Black Vultures circled around, which Selimah admitted was her favorite raptor (after the Swallow-tailed Kite):  as a vet, she found them quite endearing to work with!  The farm pond at the end of the road was quite productive, with gobs of Pintail, Green-winged Teal, a couple of Mottled Ducks, a single American Wigeon, a Great Egret, and both flavors of grebes.  A big flock of Long-billed Curlews in the field was a hit, and they even enjoyed the Killdeer trying to hide! 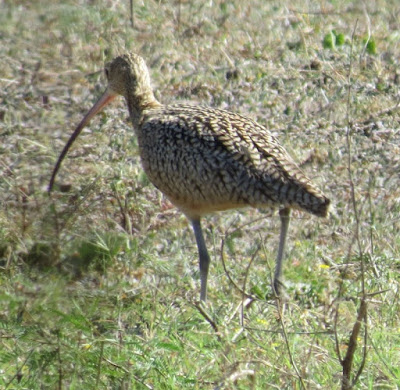 I wanted to cover Ken Baker Road before having to head back, as that’s where I usually got the cranes and geese; a few Western Meadowlarks perched on the wires and “wheeped” as we headed back down Brushline, and turning onto Ken Baker a Cassin’s Sparrow sang tentatively (and distantly), but didn’t wanna play ball.  Lots more Pyrrhuloxias were around, and another Roadrunner was cooperative for photos (although on the "wrong" side of the road lighting-wise), but it was really pretty quiet; we had a couple of Red-tailed and Harris’ Hawks (and we were looking hard for oddball sparrows as well).  Checking Bird’s Eye we saw where cranes had been seen at Hargill Playa the day before, so we decided to stop there on the way home. 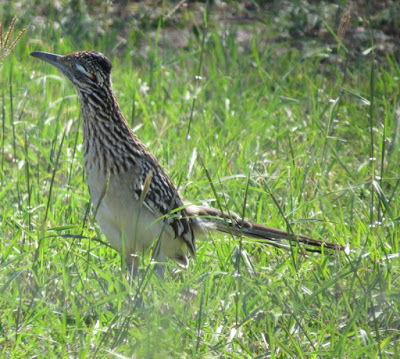 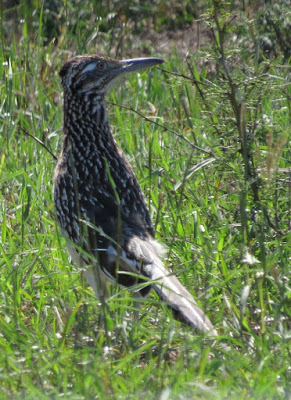 We spotted the same kite on the way down, but sadly there were no cranes to be seen; even what was in the playa itself was tough to make out due to the heat waves (we were able to add Avocet at least).  But the most exciting bird was a Say’s Phoebe out in the field!  We found another one as we followed 1st Street eastbound (Israel Cavazos on Google Maps) next to the little pond north of the road, along with some Shovelers, Coots, and a Ruddy Duck! 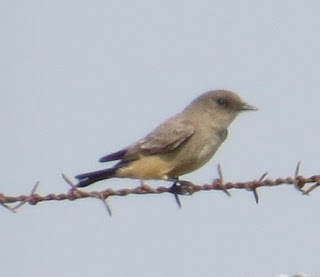 Say's Phoebe, rare (but not totally unexpected) in the Valley in winter 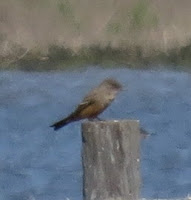 Second Say's Phoebe down the road...


We called it a day after that, with 68 species for our efforts.  Bird list: