Lyndon, an Amishman from Missouri, had contacted me for some guiding as he and his family were coming down to South Texas for the first time, but since they’d be bringing their RV and van, they had found a park in San Benito (to be close to the Island for “the girls” J) and opted to do the driving (especially since Heppy can’t handle six people)!  They had had several days of birding before hooking up with me, so in reality they had already gotten most of their targets, and just had a few to clean up, most of which were up in Starr County, so that’s where we headed!  They had actually traveled and birded much of the country, so “western” things like Scaled Quail, Pyrrhuloxia, and Roadrunner weren’t necessary, but while we talked birds his wife Luann and three daughters Kaitlyn, Karen, and Kristen entertained us with glorious four-part harmony Gospel songs! J


It was a beautiful day, and we went straight to Salineño where some fishermen had beaten us to the boat ramp, but as we headed out on the Seedeater Trail, almost right away I heard an Audubon’s Oriole!  The whole family had terrific eyes, and immediately Lyndon spotted the bird in some grasses not too far from the trail!  Everyone eventually got stellar looks at this specialty!  Other birds that graced us on the way to the end included a lady Ladder-backed Woodpecker that bounced right up to us, an Altamira Oriole that “choiped” and whistled and gave a brief view as it shot downriver, Ospreys circling overhead, and “chacking” Yellowthroats.  We also ran into Mike who helps run the famous feeders; he reported no seedeater, but lots of other birds around. 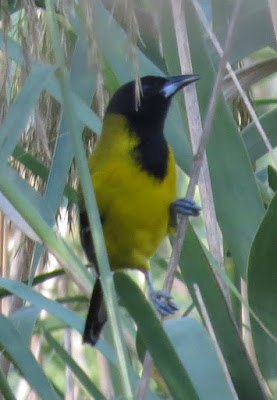 Down at the end we decided just to wait and see what showed up; as we arrived a Mexican Duck took off, cormorants of both flavors were constantly beating back and forth, and even an Anhinga flew low over the trees!  A beautiful Gray Hawk flapped overhead, a very distant White-tailed Hawk circled, and before long both Turkey and Black Vultures began to stream.  Lyndon spotted a Lincoln’s Sparrow in the ditch while another couple from Oregon wandered over, also looking for the seedeater.  Their timing couldn’t have been more perfect, as I suddenly heard the tell-tale descending whistle!  He sounded close, so I sent them towards the bush by the culvert where the sound was coming from, and Lyndon spotted him right away, sitting right in front!  Unfortunately one of the girls (I think it was Kaitlyn) didn’t get a good look before the bird flew, so Lyndon decided to take her up the hill and across the rocks to find it, only when they returned almost immediately he admitted that the mention of possible snakes on the rocks sent Kaitlyn back post haste! J  I shortly heard the bird again, and this time they spotted it in a tree where Kaitlyn was able to get a look!

The Rio Grande from the cul-de-sac

Since Ringed Kingfisher, Red-billed Pigeon, and Muscovy Duck were also targets, everyone agreed to just hang around as long as it took (or they got tired of waiting J); it wasn’t long after that when one of the girls spotted the Ringed Kingfisher up the river with her naked eye!  She was able to get most everyone on it (it was hard to pin down) before it took off; I never did see it, but Lyndon assured me that it was completely rusty underneath, so that nailed it!  A Belted also came by and hovered, and other birdlets included both Eastern and Black Phoebe, Verdin, my first Pyrrhuloxias of the area, and Orange-crowned Warbler.  Before long someone mentioned that a “gentleman with a dog” was approaching, and it turned out to be Merle the Feeder Man and their “assistant” Chamois!!  Mike had alerted him that we were here, and even though the feeders weren’t technically open to the public until the first (they still had some cleaning up and arranging to do), he invited us up to sit for a spell as stuff was coming in great guns already! 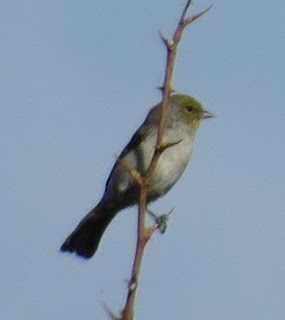 After a few more minutes at the overlook we headed back to the boat ramp where we sat for about 15 minutes (and the girls enjoyed literally cooling their heels in the river J), but since nothing new showed up, we decided to take Merle up on his offer and check out the feeders!  He was right:  Green Jays were all over, two Long-billed Thrashers came in, Olive Sparrows were ridiculously cooperative, titmice zipped in and out, a lady Golden-fronted Woodpecker showed off, Kiskadees threw their weight around, White-tipped Doves paraded across the floor, and Chachalacas gathered round (one looked like he had a bum eye).  Merle had reported that “Baldy”, the Audubon’s Oriole with the screwy feathers on his head, was back for his fifth year, but he didn’t make an appearance while we were there.  What did make an appearance was a bird I don’t think I’ve ever seen in their yard:  a Nashville Warbler taking a bath in Mike’s wonderful new water feature! 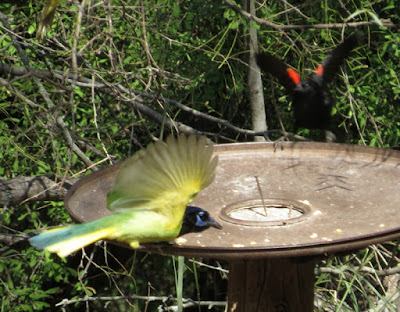 Flighty Green Jay and Red-winged Blackbird at the famous feeders! 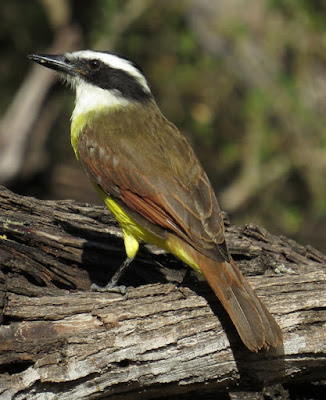 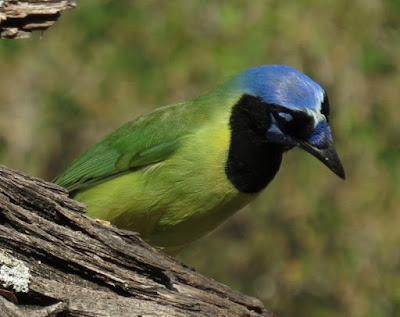 Green Jay ponders and then nabs a bit of PB Mixture (below)! 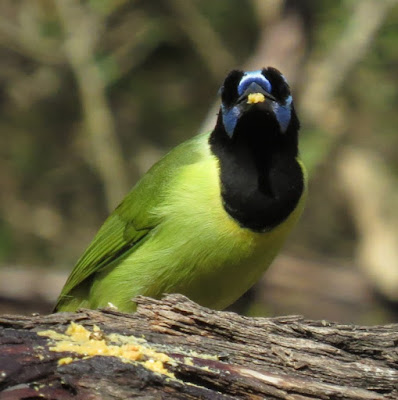 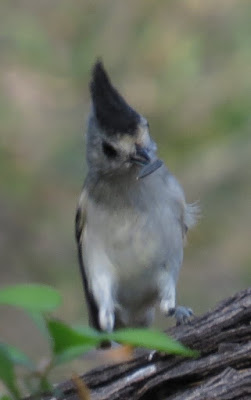 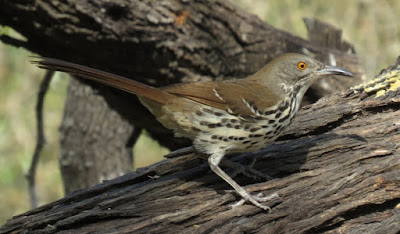 After thanking and saying goodbye to Merle and Lois we decided to check out Chapeño, another river watch site that I hadn’t been to in years!  You turn right at the sign for the Rio RV Park, and the hostess at the house gathered our entrance fee and sent us down to the picnic area where we found a great table overlooking the river, but before Luann and the girls literally rolled out this tremendous spread of home-grown turkey salad (Lyndon’s a turkey farmer J), tortillas, cheese, and other snacks, I heard the Ringed Kingfisher calling downriver, and Lyndon and the one daughter who didn’t get a good look at the previous Ringed went traipsing out to the rocks in the river, where he did make a couple of passes!  (A grackle doing a very kingfisher-like rattle had me fooled in to thinking the bird was right next to us… L)  After that excitement we sat down to lunch with some good conversation, when suddenly Lyndon jumped up and yelled, “Muscovy!!”  Sure enough, the bulky black bird with the white shoulder patches was hightailing it downriver (just like I told him they usually do J)!  That was worth the entrance fee!  I can’t recall if it was this road or the Salineño road, but somewhere in here one of the girls spotted a Roadrunner on the way out! 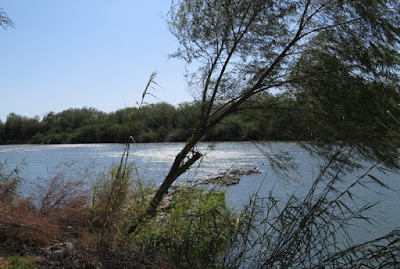 The Rio Grande at Chapeno

It was time to use the restrooms, so since Lyndon was curious about actually seeing Falcon Dam (even though you can no longer access the back of it), we headed into the state park, where what we thought was a weird-looking Harris’ Hawk at first turned out to be a rufous morph Red-tailed Hawk!  After using said restrooms we got a nice view of the dam from the boat ramp, then trying to decide what to do next, we settled on the Dump Road seeing as Cassin’s Sparrow was also a target.  We crawled along to that nice open grassy field, where we stopped and I tried a little coaxing, and lo and behold a bird came tearing in and landed on a post!  He actually stayed put while we crawled up so that everyone wasn’t looking through the windshield, and what was even more miraculous was the fact that he still stayed put after we pulled over to let this creepy guy by who decided to stop between us and the bird!  We explained we were looking at the Cassin’s Sparrow, to which his eyes glazed over and he kinda shook his head and continued on, while the sparrow stayed on his post! 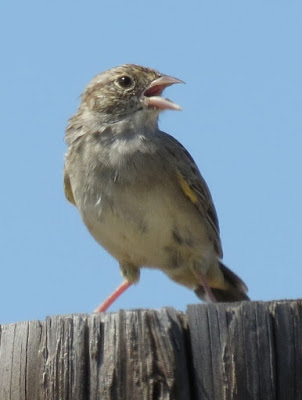 After a quick stop at Roma Bluffs just to see the place, a notice came over the LRGV Rare Bird Alert that a Northern Jacana had been spotted at Estero Llano Grande, so rather than go back to Salineño and hope for a longshot pigeon (the latest report had been in Laredo, anyway), we decided to go for the jacana (and especially since Tropical Parula and Groove-billed Ani had also been reported there)!  We pulled into Main Street in Alamo so I could retrieve Heppy the Forrester and they could follow me to Estero and then head on to San Benito from there.  Upon arrival on the deck we were greeted by my birding buddies Huck, Sue, Billy, and Deb (who had found the bird in the first place J), so after taking a quick look at the whistling duck mob Huck grabbed his own scope and led the way to Avocet Pond!  Thankfully a couple of other folks were on the bird, who was popping his head up and down in the grass near some other whistling ducks, and everyone got great looks (Lyndon even got to see his long toes a couple of times)! 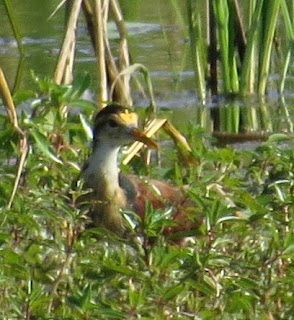 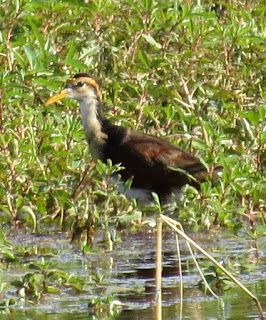 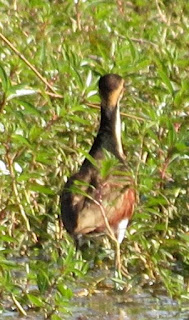 Interesting pattern from the back...


Huck told us where he had seen the ani, so we headed back to the deck (only I missed the back trail because we were busy yapping and greeting Rangers Raul and Javier, getting distracted J), but had we gone that way I wouldn’t have seen the Ovenbird that Lyndon pointed out!  (I think they were amused by my getting so excited about it, as they have tons where they are… J)  We eventually got to the back trail where we had had the Bay-breasted Warbler last Saturday; no ani, and no screech owl in the white building, but lots of ducks were in the wetlands.  We made our way back to the “Picnic Table Drip” back in the Tropical Zone, and while things were quiet for the most part, what should eventually come to the drip but the Bay-breasted Warbler!  I’m sure they would have preferred the parula, but that was pretty cool!

My guiding time was up about then, so I left them to enjoy the rest of the park (they later texted me and reported a Wood Thrush, Lesser Goldfinch, and Black-and-white Warbler) while I headed back to the parking lot, where Billy was giving Deb a lesson in plants (and I listened in, of course)!  We ended up with a modest 67 species for the day (not counting what Lyndon et al saw after I left), but since we were so focused on certain targets I probably overlooked some stuff…  Bird list: