This morning the million dollar question was, “What do you still need?” J  Olive Sparrow and Clay-colored Thrush were big on the list, so we all (including Katinka again) headed west to Quinta Mazatlan while Sue and Warren gave me the skinny on how their tram tour with Huck at Estero went on Sunday (in short, it was fabulous, and they did get the Pauraque and Screech Owl, so I was pleased)!


Well, it wasn’t until I turned into the drive at Quinta that I remembered that they were closed on Mondays L, so trying to think fast as to where we could possibly get those two (at places they hadn’t already visited over the weekend; my first choice would have been the Butterfly Center, but they had already gone there Saturday with no luck), I thought maybe cruising the levee on the way to Bentsen might be useful.  In the meantime Warren remembered a few other targets he thought of on the fly (Bronzed Cowbird, Groove-billed Ani, and Cave Swallow) and a better look at a Ringed Kingfisher!


We climbed up on the levee at the La Lomita Mission access, picking up a Caracara on a pole, and turned around at the red levee gate before getting out to just look and listen for a minute.  Katinka spotted a Harris’ Hawk right away, but it was pretty quiet, so we continued on, picking up two more Caracaras sitting on a giant hay bail.  Down closer to a property with a wooden fence I heard some Olive Sparrows teeping, so we piled out, and with a little bit of coaxing they came right out in the open!  Beautiful looks!  Continuing on a Bobwhite gave its covey call, a White-tailed Kite flew overhead, and a young Gray Hawk posed across the way (we also had an adult earlier). 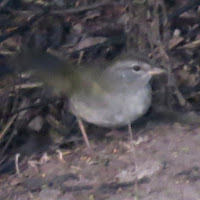 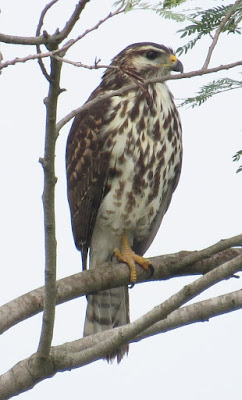 
Much to my delight the section of the levee between Chimney Park and Military Highway was actually open, and that’s where all the birds were!  Scissor-tailed Flycatchers were staging by the dozens, and a dry pik revealed a Rose-breasted Grosbeak!  We also had an Ash-throated Flycatcher in the same tree while an Altamira Oriole whistled away happily.  But amongst all the kingbirds and mockingbirds was a pair of Clay-colored Thrushes!  They were tough to get our “guidees” on as they kept moving down the levee chasing the other birds (and we kept chasing them), but the birds finally settled down long enough to give Warren and Sue scope views!  While trying to pin down the thrushes a Ringed Kingfisher did call from the river, but he just wasn’t visible at that distance.   As we packed up we mused that we probably gave the two Border Patrol guys parked just down the way their entertainment for the morning! J 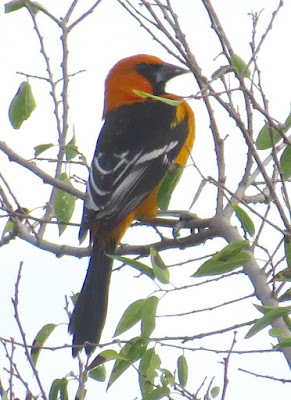 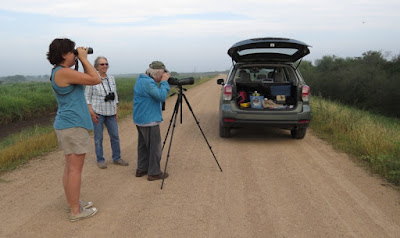 The gang enjoying the Clay-colored Thrush (below)! 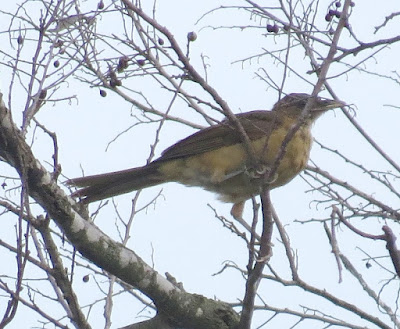 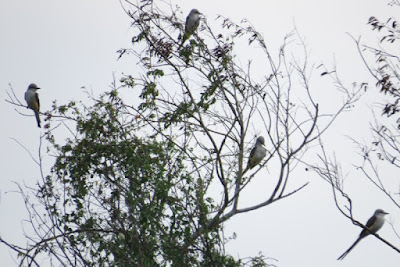 A few of the many Scissor-tailed Flycatchers

Continuing on we had a White-faced Ibis and a Roseate Spoonbill fly over the levee on the way to the paved portion, where we quickly pulled up to the bridge over the canal in hopes of Cave Swallows.  Unfortunately they were done gone,  but we did have another pair of happy Altamiras!  A state trooper pulled up behind me, but he just wanted to make sure we were okay; I think his eyes glazed over when I explained we were looking for Cave Swallows! 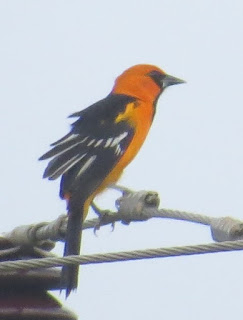 Yet another Altamira Oriole


From there we headed on in to Bentsen to at least check out the canal; while checking in the ranger mentioned that she had had anis the week before back where the park host area is, so we headed over there first.  I figured the anis were pretty much gone, but Katinka found a Nashville Warbler and Ruby-crowned Kinglet in the thornscrub, and Warren spotted some Chachalacas up in the trees.  A couple of Hooded Orioles were near the buildings, and as we made our way to the road next to the canal the only swallows we could pull up were Roughwings.  A small party of Inca Doves fed behind the buildings, and closer to the road Katinka spotted a Black-and-white and Tennessee Warbler, while I stumbled upon a female Indigo Bunting that was preening (and of course took off the minute I got the scope L)!  Two Black Phoebes were having a dogfight at the bridge, but alas, no Cave Swallows or Ringed Kingfishers (and also found out that you don’t have to pay if you stayed “this side” of the old Gatehouse - now the Nature Center)! 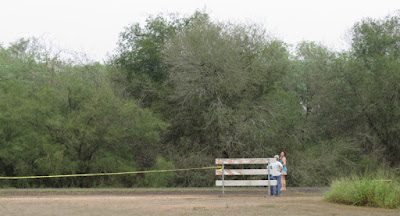 Looking for anis in the "back lot"

Our last attempt was at Anzalduas (keeping in mind that we needed to focus on spots that didn’t involve a lot of walking).  Going in we witnessed a little spat between a Kestrel and a Cooper’s Hawk, and got all faux excited about the House Finch pair on the wire (a flaggable bird for Hidalgo County, but expected here, and of course a junk bird to my guidees J)!   The spillway had a flock of Blue-winged Teal, and I pointed out the Sprague’s Pipit Field for future reference.  They had the south road closed off for some reason (the one paralleling the levee), so we stuck to the river, picking up three Ospreys, a Neotropic Cormorant, and a Great Blue Heron, but no kingfisher… L  Another Black Phoebe was at the boat ramp (we got Eastern coming in), and as we made our way toward the dam a lovely Vermilion Flycatcher perched on top of a tree!  More Rough-winged Swallows were swooping over the grass over by the dam, but no Caves (the Cliffs were long gone of course).  Poor Warren missed both the Laughing Gulls that flew over (he made a crack about not being able to count anything on the opposite – i.e. Mexican – shore)!  On the way out we were checking the grackle flocks feeding on the ground for the hoped-for cowbird, but in the process spotted four Green Jays in with them!  Then a male Golden-fronted Woodpecker came up close and perched in a mesquite, giving great looks! 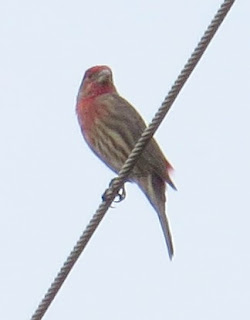 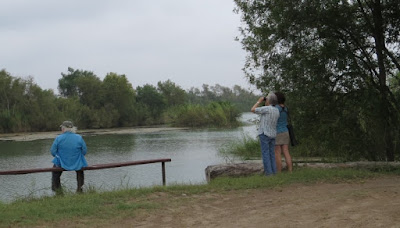 Checking out the Rio Grande 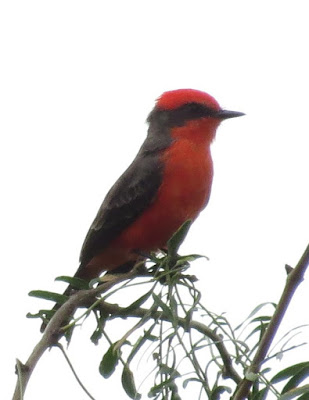 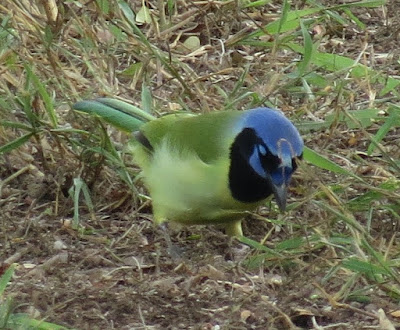 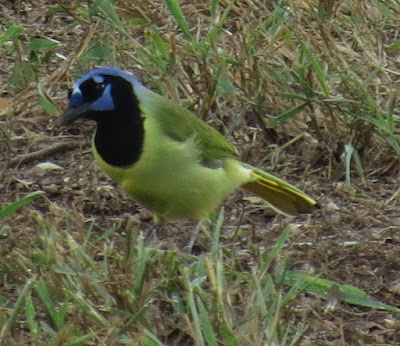 Before long it was time to head back, but we didn’t do too badly with 67 species for the morning! (And as a bookend, I ran into Warren later who reported that Huck had found an ani at Estero today!!  L  Another excuse to come back…)  Bird list: