It was still cold (in the low 40s), but at least it wasn’t raining when I met my charges, Kay and Martin from Great Britain, at the Inn for a morning’s birding!  A fine mist was covering the car as I drove, so we decided to switch the destinations for the two-day adventure and do the La Sal del Rey Route this morning.  Picked up Cattle Egrets flying across Alamo Road for the first “interesting” bird of the day!


Kay and Martin were self-described “nature lovers”, not hard-core birders, so they were happy with whatever came by!  We started on Brushline Road north of SR 186 where it was pretty quiet to start, but we had plenty of Caracaras and a couple of Eastern Phoebes show well.  One pair each of Golden-fronted and Ladder-backed Woodpeckers seemed to be squabbling over ownership of this one power pole, and the mammal highlight was a pair of Racoons rummaging in the road before a passing truck scared them off!  We also had a couple of White-tailed Deer crossing the road, but I was keeping an eye out for Nilgai!


We decided to take a hike out to the Salt Lake, which because of the cold was also rather quiet, but at the parking area a Long-billed Thrasher called, and we managed brief looks at Blue-gray Gnatcatchers, Ruby-crowned Kinglets, and a House Wren near the pit toilet.  Some distant Sandhill Cranes were calling, and they eventually flew over the trail, giving great looks, while a single American Pipit and chipping Yellow-rumped Warbler was less impressive…  Some Olive Sparrows lisped in the cactus patches along the trail near the lake, but true to form, didn’t want to come out. There was absolutely nothing at the lake (except a lot of water from all the rains), so we poked back to the car, scaring up that female Nilgai we had been looking for! 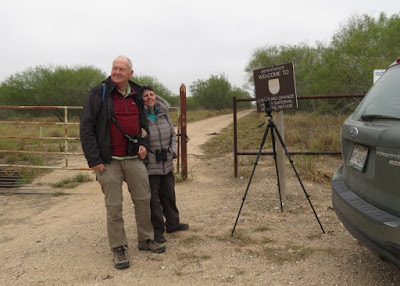 Martin and Kay at the trailhead 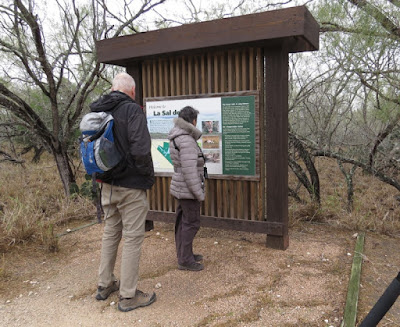 Reading up on the history of the salt lake

Continuing to crawl north, we eventually had some nice sightings along the road:  some Black-throated Sparrows popped up across from the ranch with the picturesque gate J, a couple of Black-crested Titmice showed well in a feeding flock along with some Orange-crowned Warblers and Bewick’s Wrens, a Verdin actually showed itself, and a Cactus Wren popped up at one point!  Cardinals kept fooling us into thinking they were Pyrrhuloxias, and a young White-tailed Hawk made a strafing run at a Turkey Vulture!  (A Caracara did the same thing later, along with a Kestrel…)  A Long-billed Curlew called unseen, Green Jays fed along the road, and a couple of Turkeys made a beeline into the brush!  On the eastbound leg of Brushline we had a Loggerhead Shrike, a pair of Harris’ Hawks, and just before hitting the farm pond a fence line was quite active with a pair of Curve-billed Thrashers, several Kiskadees, and a Pyrrhuloxia.  (It may have been here I got a brief glimpse of a White-crowned Sparrow before my attention was required elsewhere… J)  The farm pond itself was quite productive with tons of Gadwall, a few Shovelers, a pair of Mottled Ducks, and singletons of Pintail, Green-winged Teal, and Ruddy Duck!  Both grebes were represented, and three Avocets fed next to a Great Egret.  A Great Blue Heron and Greater Yellowlegs noisily objected to our presence, while the Killdeer in the field didn’t seem to care…  In the process of turning around we spotted a brilliant male Vermilion Flycatcher, more Black-throated Sparrows, a female Pyrrhuloxia, and a Harrier cruising around!  A Sprague’s Pipit gave its distinctive pike out in the open field, and we finally got our Roadrunner sunning on westbound Brushline! 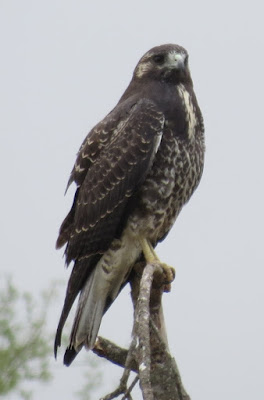 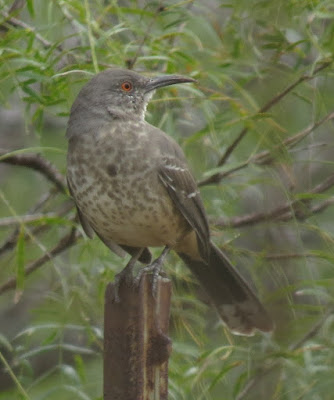 We turned onto Ken Baker Road and were greeted by several Black Vultures sitting on a power pole!  That wasn’t the only thing we were greeted with, as the road itself turned out to be quite adventurous – again, I was glad I was raised learning to drive in snow!  We went through several bad spots that I pondered going through at all, but we made it (including one really dicey spot near Rio Beef Feedyard that a huge semi truck went through shortly after we did), and it was worth it:  a pair of Bobwhite flushed right next to us, a pair of lovely adult White-tailed Hawks posed along with a single Red-tailed Hawk, and a pair of Scissor-tailed Flycatchers performed well!  But the best treat was in the “barren field” with a herd of about 15 Wild Turkeys! 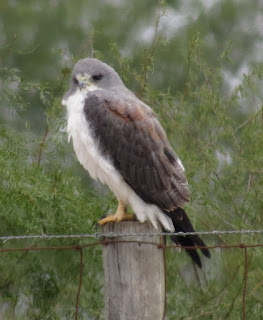 We really had to scoot after that, so we headed back to Alamo with an even 60 species for the morning!  Bird list: