The good news was that it wasn’t raining the next morning; the bad news was that it got progressively worse as we headed to Starr County! L  So the plan was to road-bird Falcon State Park until it quit (which was supposed to be around noon) and then head to Salineño.  We had plenty of Mockingbirds along the entrance road, and I pointed out the Coma trees that the Red-billed Pigeons like in the spring.  An “Audubon’s” Warbler gave its dry chip (not as husky as the “Myrtle”), but understandably it was pretty quiet!  After stopping at the entrance for bathrooms we started to pile into the car when a Roadrunner on the side of the road distracted us!  A Curve-billed Thrasher was with him until he gradually made his way to the curb near the parking lot, then headed back to the main road (until an RV came by and shooed him off…)!

There was really zero bird life as we cruised around the outer loop and the primitive campground, but the boat ramp had a young Great Blue Heron and Neotropic Cormorant tag fishing by the pier!  Probably the best sighting of the day happened after we turned the corner from the boat ramp area towards the rec center, and there was a whole herd of Collared Peccary hogging the road (no pun intended)!  They allowed pretty close approach in the car, and they all appeared to be guzzling down the water that had puddled on the road!  A “thooking” Hermit Thrush added background sound effects, and the Osprey on the pole by the butterfly garden was almost anticlimactic! 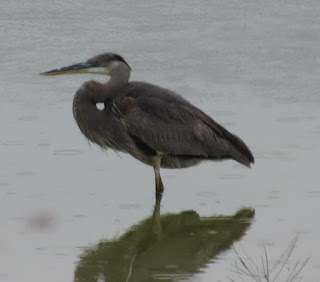 Collared Peccaries at a puddle 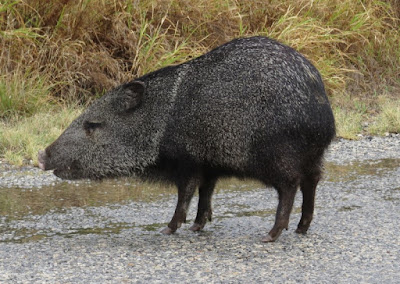 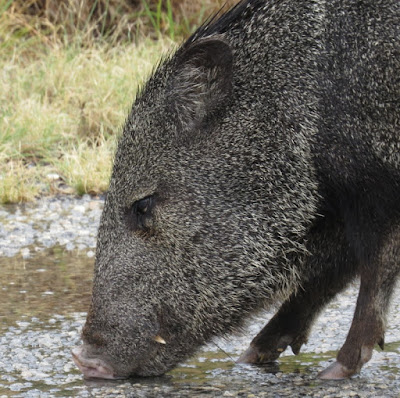 Check out that tusk! 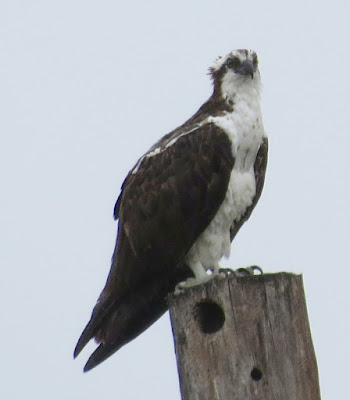 The picnic area was quiet as well, but a view into the lake from there added one White Pelican, a Laughing Gull, and distant egrets and cormorants, while we finally bagged a Pyrrhuloxia in the cabin area.  Several more Roadrunners made appearances here and there, and a crawl through the one road that was open in the hookup area produced a nice feeding flock with Orange-crowned Warblers, kinglets, a Bewick’s Wren, and an Olive Sparrow that popped up! 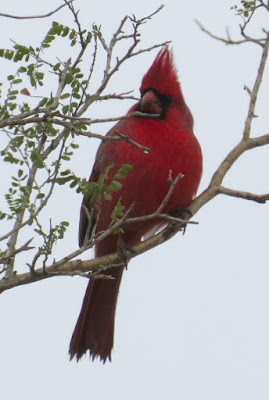 It was still raining, so we made a mad dash for the Salineño feeders (we did not go by way of the Dump Road J), where Lois assured us via text message that the awning on their RV was up and we could enjoy the birds while staying dry!  The place didn’t disappoint: it was hopping with Bobwhite, four kinds of doves, Altamira Orioles, both woodpeckers, a Long-billed Thrasher, the Olive Sparrow, Green Jays all over, and so many Chachalacas that Mike and Merle had to chase them off!  It turned out that Bronzed Cowbird was a life bird for Peggy, so we actually were able to pick one out amongst the hordes of Redwings!  While the Audubon’s Oriole didn’t come in while we were there, the biggest surprise was hearing an American Robin talking to us off-stage! 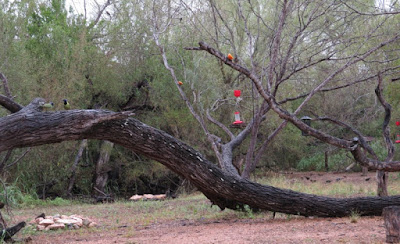 The famous feeder area at Salineno 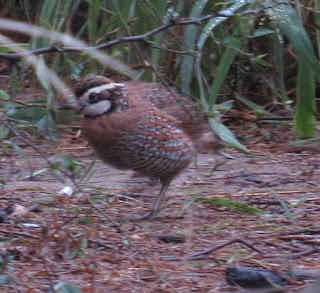 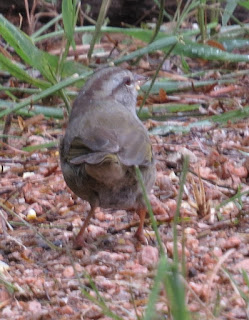 (The light was too low for sharp stills, so here are a few videos...)

It was still dripping a little bit, so we sat at the boat ramp (in the car) and had a Green Kingfisher land on the cement wall!  It let up enough so that my charges wanted to hike the trail, so we bundled up and headed out, where about all we got at first was some exercise trying to stay upright on the slippery trail!  All the action was at the cul-de-sac, where a nice little flock of Mexican Ducks sat for us!  Eventually other stuff showed:  a pair of Gray Hawks flew overhead, whistling away, while a Red-shouldered called unseen upriver.  Also vocalizing upriver was an Anhinga, and a Snowy Egret showed up with his golden slippers!  A Belted Kingfisher rattled and landed, while a Black Phoebe peeped in the reeds on the little island.  A lovely Vermilion Flycatcher sat across the culvert, and a Spotted Sandpiper flew across the river with its characteristic bowed wingbeat.  The seedeater never showed up, but across the river we heard the Scrub Jay-like “shack” and sad whistle of the Audubon’s Oriole, although we never could spot him… 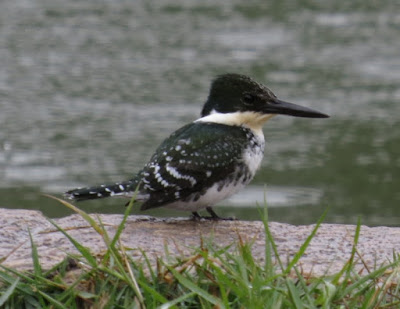 With that, my charges were more than happy to sit at the feeders some more in hopes of said oriole coming in, so back up we went (with our lunches this time, I think J)!  Merle informed us that the Clay-colored Thrush had shown up just as we left L, but at least it was showing, so we were hopeful!  Before long we heard that “shack” again (a little harsher than the Altamira’s “choip”), and here came Baldy, the Audubon’s Oriole with some missing head feathers, back for his fifth year, Merle said!  His mate also came in, so we enjoyed them until it was time to wrap up and start heading back to Alamo.  But Peggy wanted to give it just a few more minutes, and it’s a good thing we did, as that’s when the Clay-colored Thrush came in! 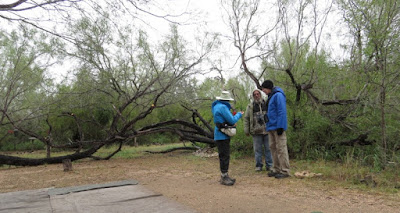 Mike shows John and Peggy a chili pequin, that reportedly made him dance when he ate it... 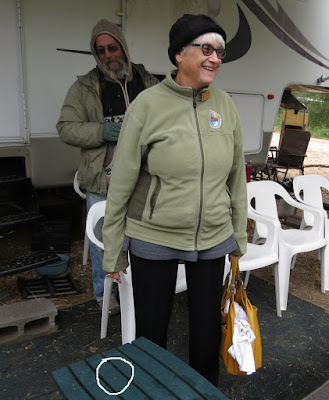 Lois pointing out said chili (circled, believe it or not)!

We bagged one more species than the day before with 58, but that’s not bad for Starr County, even on a sunny day!  Bird list: