Oh, What a Miserable Morning!

There was some talk about canceling today’s trip, as the weather was so miserable:  a major cold front blew through last night (and my poor charges, John, Margaret, and Peggy, had to drive to Alamo from Harlingen in the middle of the storm L), and after getting in late, they were pretty beat!  And on top of that, the electricity went out in the middle of the night in the main building, so no coffee! L  So we made a stop at Coffee Time down the road, and since John’s original request was to see the birding hotspots that potentially would be affected by the Border Wall, we first headed straight to Santa Ana.


With the rain and cold wind (a wind chill warning was in effect) there was no way were gonna hike the trails, but I figured that watching the feeders from the comfort of the visitor’s center would bag them some Valley birds!  But about the only takers there were an Orange-crowned Warbler and a fat Fox Squirrel, and ironically all the action was at the outdoor feeders closer to the restrooms!  So we braved the wind and enjoyed some very wet Green Jays, Inca and White-tipped Doves, and Red-winged Blackbirds, with a token Long-billed Thrasher that showed up at the last minute!

Rain doesn't stop this Green Jay from getting breakfast!

When we could no longer stand it we headed to the next stop, Old Hidalgo Pumphouse, but with the rain about all we did was cruise the neighborhood in search of Monk Parakeets, but they were smarter than we were and were hunkered down somewhere!  So we continued on to Anzalduas where we could at least bird from the car!  Our one and only Mottled Duck powered overhead on the entrance road, and a female Kestrel uncharacteristically held still for a photo (until John got his camera out L).  We had a small group of Blue-winged Teal along the spillway, and I listened for the Rock Wren that had been reported, but he was probably hunkered down, too…  By the river we were treated to the eerie sight of fog blowing off the water like dry ice; we all jumped out to get pictures of that!  On the Mexican side several Snowy Egrets and a couple of Cattles were hunkered down, while a Great Blue Heron fished as though nothing were unusual about the weather! 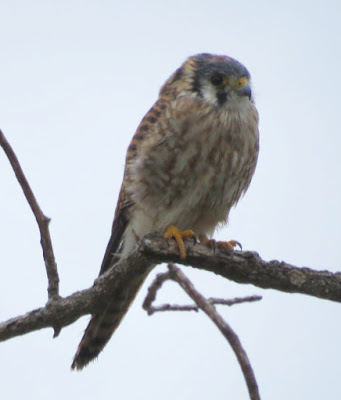 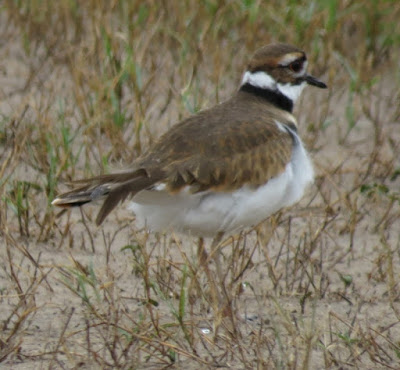 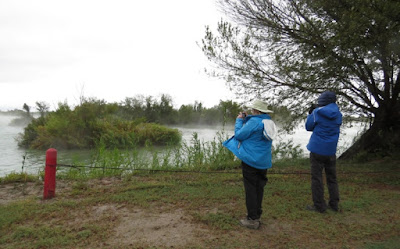 Peggy and her brother John shoot the fog...

Watch carefully for the fog blowing in! 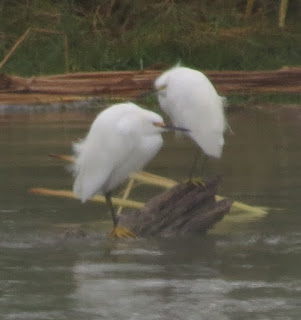 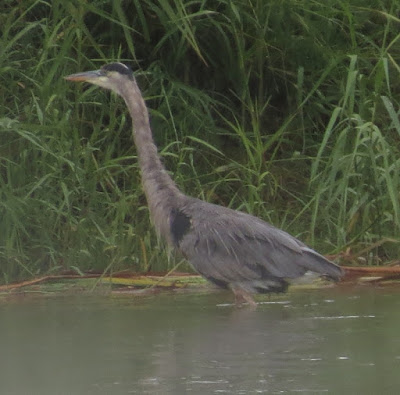 Things were actually pretty slow until we got to the “government area”, where a pretty Merlin posed and preened (and we got chastised once again by the Constable for blocking the road L), and around the dam side of the park a brilliant Vermilion Flycatcher put on a show for us!  We later saw a young male, along with a flock of American Pipits in a grassy area.  Since it had actually quit raining for the most part, we decided to risk tackling the Big Field for Sprague’s Pipit, and managed to flush a couple where they landed in view!  Tons of Barn Swallows were flying around, and the Western Meadowlarks were anticlimactic, but it led to a story by Margaret as to how their school got named after them! 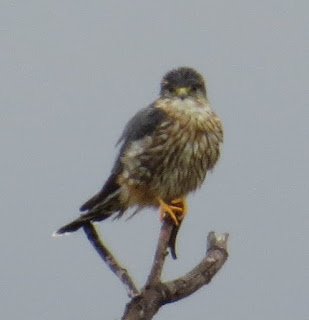 Merlin checks us out... 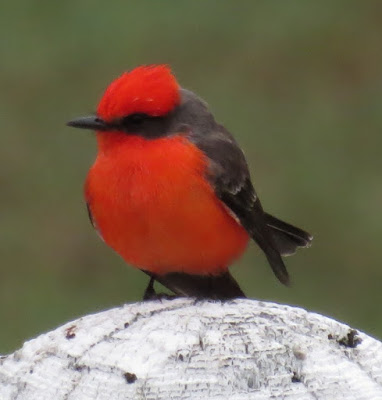 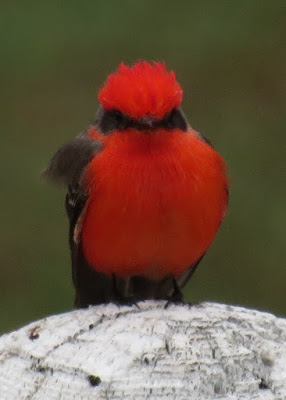 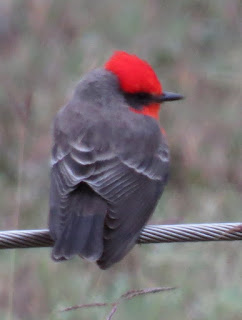 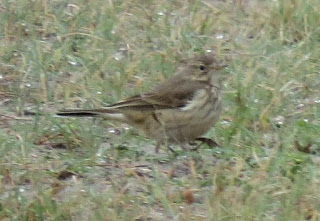 From there we got up on the levee and slowly cruised; a very distant Ringed Kingfisher got added to the “heard only” list, and a Gray Hawk on a wire was a hit!  Once off the gravel levee we kind of made a beeline to Bentsen for a restroom break, where I dropped the gang off and then went to park the car; on the way in I spooked a female Ruby-throated Hummer hunkering by the building!  Checking the feeders from the comfort of the gift shop bagged us a Buff-bellied Hummingbird, and while I was gone the girls had found out that the park was gonna use the enclosed van for the tram, not the open vehicle, so after running back to the car for our lunches, we joined my birding buddy Huck (who had been looking for a lost Audubon’s Oriole) and hopped in the van for a ride!  At the Nature Center feeders we added Chachalacas, and on the loop we spooked a Cooper’s Hawk, but it was pretty quiet overall.  While dragging ourselves back to the car I heard a distant Altamira Oriole singing, but just as I was stepping into the driver’s seat Huck called to us from a nearby wooded plot, saying that he had a Pauraque!  Of course we all piled out, and after finally finding the bird, she flushed and landed several times, but John was never able to get a good look.  When Huck went around the back of the plot, she finally hopped up and made a pass right in front of us before rowing across the back parking lot to another wooded spot for some peace and quiet – that was a good look, said John!


Thankfully it had quit raining, so we headed back to Old Military Highway, only as we were crossing the canal Margaret thought she had lost her gloves!  I made a U-ie to head back to Bentsen, but by the time I reached Inspiration Road she had found them, so I was “inspired” to check out the pond since we were right there!  That turned out to be a profitable stop:  while the pond was pretty empty overall, we did add Great Egret and three Neotropic Cormorants to the day list, and after turning around we had a cool-looking immature Harris’ Hawk sitting on the ground! 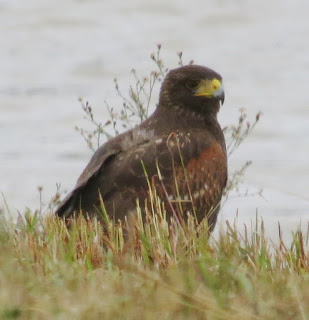 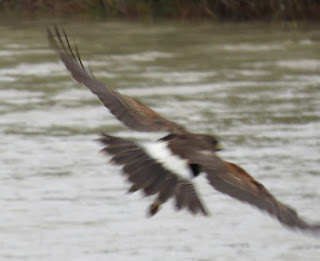 Fuzzy, but you can see the tail pattern

Went the back way to Old Hidalgo Pumphouse where a Curve-billed Thrasher greeted us as we drove into the parking lot!  I heard a Clay-colored Thrush “ring” as we crossed the little bridge over the Old Swimming Hole, but we could never locate it… L  We checked the resaca from the lower deck (it was too cold and windy from the upper deck) where a female Anhinga was a hit!  Again, it was too cold to hike the levee, but I showed them The Wall Part I, then we walked behind the pumphouse building where a Ladder-backed Woodpecker kept playing hide-and-seek with us!  No thrushes in the north side gardens, but we bagged an uninteresting (to Californians and Coloradoans) Black Phoebe on the curb!  We trudged back to the car, checking once again the parakeet nest down Gardenia; no parakeets, but we had a lovely Kiskadee perched below the nest. 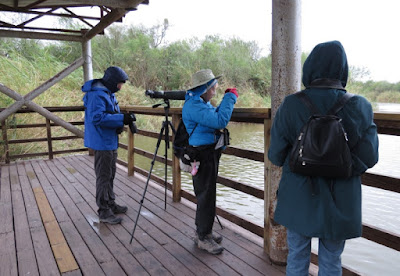 Enjoying the female Anhinga (below) 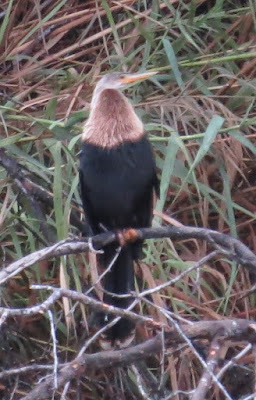 We ended the day by revisiting Santa Ana and hiking the Chachalaca Trail; it was quiet going in, but we ran into a few feeding flocks that had titmice, Orange-crowned Warblers, gnatcatchers, a Ruby-crowned Kinglet, and both House and Carolina Wrens.  At the blind John spotted an Eastern Phoebe, while Yellowthroats chacked all over and a Sora whined.  A Harris’ Hawk yelled in the distance, and at the “full” Willow Lake we flushed a young White Ibis.


For a pretty lousy day weather-wise we didn’t do badly with 57 species!  Bird list: