Finally was able to get out to Willacy County and road-bird this interesting but underbirded route!  It begins at the intersection of FM 490 and FM 1420 in Willamar, heads south to Flores Road (CR 2100 on Google Maps), and from there you follow a series of dirt roads that eventually wind up on the levee (and you’re actually allowed to drive on this one J).  My first stop is actually a half mile south of the starting point, and I wound up getting there about a half hour before sunrise, so I was able to add a distant Great Horned Owl to the list!  The only Olive Sparrows of the day lisped from the scrub, and several House Wrens scolded while a Bobwhite called in the distance.


The next stop (the bridge over the canal) is one of the most productive ones on the route, and today was no exception!  A handful of White Pelicans drifted over the road before I got there, and after I got there several Double-crested Cormorants flew back and forth.  A couple of Great Blue Herons stood sentry, a single Greater Yellowlegs was nice, and the day’s only Yellowthroat called from the reeds, but even better was a barking Song Sparrow, a widespread bird that rarely shows up in the Valley!  Unfortunately it wouldn’t bark for the tape, nor did it come out to pishing (and I’m so conditioned not to use playback in the parks that I totally forgot that I could have tried it there), so the “eBird Bird Records Committee” will have to take my word for it! J


At the next stop picked up a singing Cactus Wren, and at the turnoff to Flores/Citation a couple of Red-shouldered Hawks were yelling.  I could have sworn I heard a Beardless Tyrannulet, but it was only one distant “wheek”, so I wasn’t sure…  Once on Flores there were lots of Lincoln’s Sparrows smacking, a few Orange-crowned Warblers, a whitting Least Flycatcher, and a gorgeous Altamira Oriole!  In the more open area what looked like a “western” type Red-tailed Hawk sat on a post, and both Sandhill Cranes and Snow Geese were feeding in the fields!  Other raptors looking for breakfast included White-tailed Kite, Harrier, and several Kestrels.  A side trip down Wildlife Road added my first Wilson’s Warbler of the area and a Harris’ Hawk on a pole. 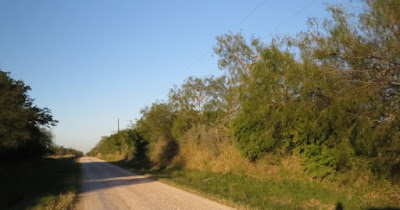 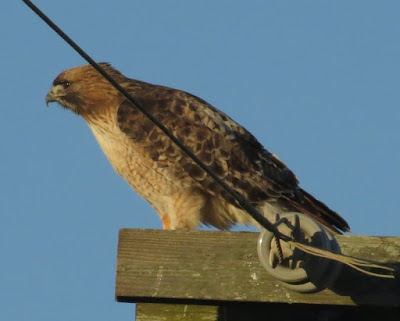 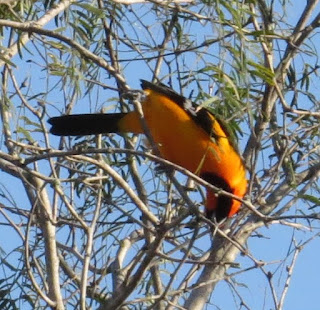 Continuing on Citation I checked the old barn for owls (nada) but picked up Loggerhead Shrike instead.  Citation eventually turns into Old Alice Road and passes Grace Heritage Ranch.  Unfortunately the nature trail that Mike and I had discovered last time was roped off, so I didn’t get any exercise (and it was a great little trail besides, so I was a little disappointed L).  A little wetland near a house had a female Vermilion Flycatcher, and their field had about 50 cranes in it! 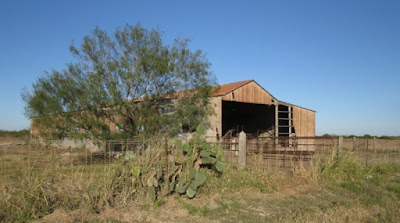 Barn that often houses an owl 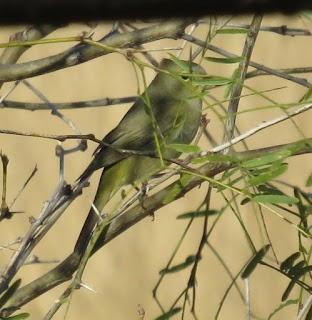 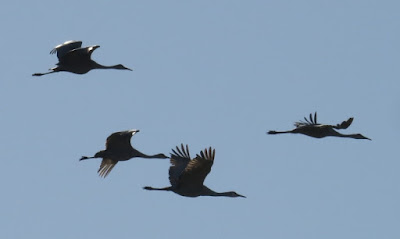 Sandhill Cranes (in someone's field below)

Headed up on the levee where the wind really kicked in, so I had to stay in the car for the most part; did pick up another kite, several Turkey Vultures, and some Mottled Ducks in a little wetland.  Turning around at the gate, on the way back kicked up a Sprague’s Pipit doing its “stair-stepping” routine in front of the car!  Past Old Alice you come to the actual Santa Monica Wetlands, which is usually dry, but this time it did have some water in it, along with two groups of Snow Geese of both flavors!  Couldn’t pick out any Ross’, so I was happy to get that close one on the whirlwind day with Barbara!  Further on a covey of Bobwhite exploded from the side of the levee. 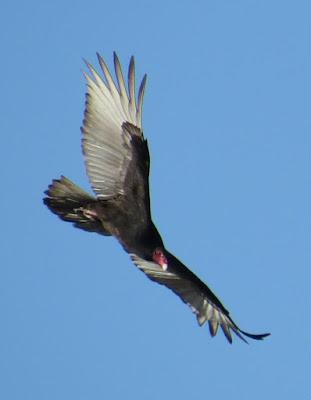 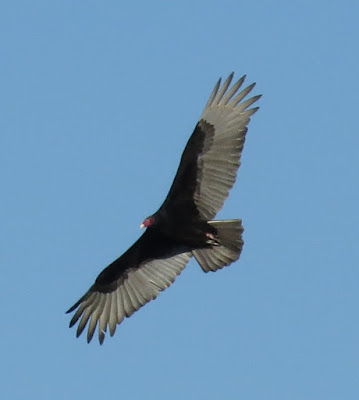 Two views of the actual Santa Monica Wetlands with geese 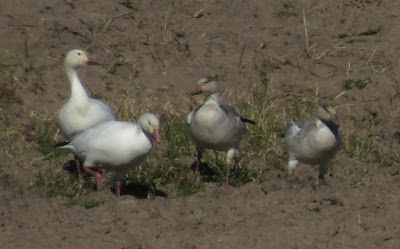 A (probably) pure dark morph ("Blue Goose") is on the right 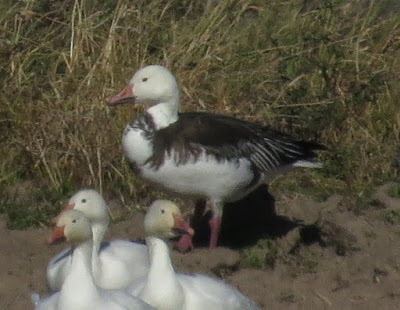 Many "Blue Geese" have a lot of "white morph" blood in them, however...

Once back at FM 1420, that officially ended that route, but I always have time to quickly check out “Primrose Path”, a short county road (375 according to Google Maps, also called Jansen Road but the street sign calls it Primrose Court) that historically has had a wintering Prairie Falcon and Mountain Plovers.  None of either had shown up for the last several years, but I always feel it’s worth checking, and there are also a couple of ponds that can be productive, along with some grasslands in addition to the barren fields (which always have Horned Larks at least).  The ponds (which were dry last time) had some water in them, but no birds as the owner was in there clearing some brush.  At the intersection with Mesquite, a floppy bird swooped by which turned out to be a Say’s Phoebe!  I took a bunch of pictures figuring it would get flagged by eBird, but it didn’t, so I guess they’re fair game in Willacy County!  Continuing on a stop at the canal bridge added a lovely White-tailed Hawk flying overhead along with the ubiquitous Turkey Vultures. 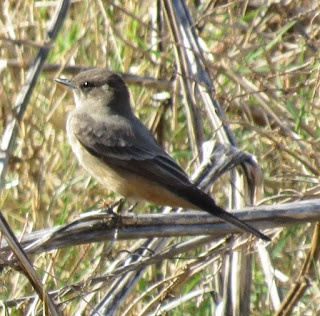 Say's Phoebe, a somewhat rare but expected winter visitor to the Valley 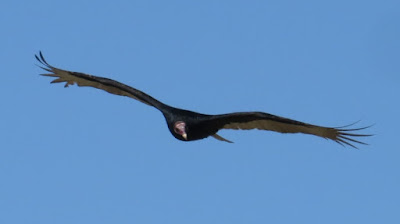 Yet another Turkey Vulture 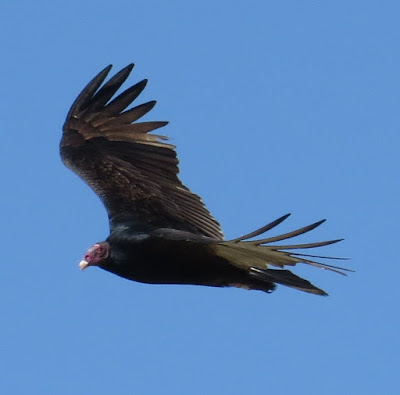 The road ends at FM 498, but I jogged over to CR 370 (the street sign calls it Petunia, but Google Maps calls it Humphries) and took that north, weaving through the patches of thornscrub and wind farms amongst the barren fields, checking for possible Mountain Plovers, but nada.  That roads dumps back off on FM 490, so it was an easy trip home from there.  Ended up with a modest 60 species for the morning.  Bird list: